In-fights among the party’s state leaders and poor performance in the recent general elections have made several within the Congress-NCP combine wary of their political future. 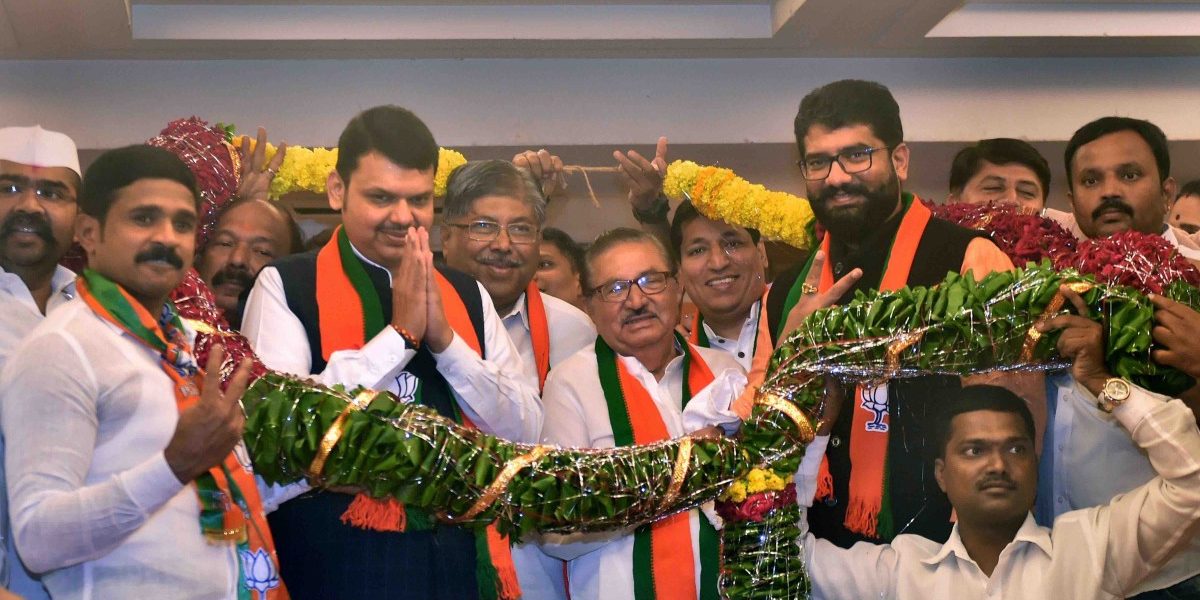 Mumbai: On July 28, senior BJP leader and Maharashtra water resources minister, Girish Mahajan announced that at least 50 MLAs from the Congress and Nationalist Congress Party (NCP) had been in touch with the Bharatiya Janata Party. Two days later, on July 30, four of the prominent faces – NCP legislators Vaibhav Pichad (Akole constituency), Shivendra Raje Bhosale (Satara) and Sandeep Naik (Navi Mumbai) and Congress’s Kalidas Kolambkar (a seven-time lawmaker from Naigaon) – had hopped over to the BJP.

This was not a one-off occurrence. Just a week earlier, another NCP leader, Sachin Ahir, who had been with Sharad Pawar since the party’s inception in 1999, had joined the Shiv Sena. In May, Jaydutt Kshirsagar, an NCP leader and former state minister, too quit his parent party to shift to the Sena. In April, Congress national spokesperson Priyanka Chaturvedi had quit the party to join the Sena.

Mahajan’s claims and the ongoing mass exodus of Congress-NCP leaders and shift to the saffron combine – barely two months before the state assembly election – is actually symptomatic of the deeper rot within these parties. Lack of leadership, in-fights among the party’s state leaders and poor performance in the recent general elections have made several party leaders wary of their political future.

In the Lok Sabha election, both the Congress and the NCP managed just five out of 48 seats in the state. NCP won four and Congress just one, while the BJP-Sena combine won 23 and 18 seats respectively. In almost 20 seats, where the NDA candidates won, Congress and NCP leaders lost by a margin of over two lakh votes, indicating their poor preparedness to tackle the growing hold of saffron parties in the state.

Also read: In Maharashtra, Congress Proved to be Its Own Enemy

And now, just months after the results, several leaders are already switching sides, making a complete shift in party ideology. Political observers term this phenomenon as “de-ideologisation” of the Congress and the NCP. “How else can they (the Congress and NCP) otherwise explain how their party leaders have suddenly decided to make a 180-degree switch just months before the elections?” asks Prakash Bal, senior political journalist.

Vaibhav Pichad, while leaving the NCP, which his father Madhukar Pichad has had a long association with, claimed that his shift to the BJP is “keeping the general public’s interest in mind.” This, a senior NCP leader said, was hogwash. “Just because a certain party is winning doesn’t mean they have the public interest in mind. And to claim that someone is leaving a party keeping the public’s interest in mind is a plain lie. These politicians have all proved to be opportunists and don’t care for any party ideology or its legacy,” a senior leader said, requesting anonymity.

Several decisions, particularly the one to give 16% reservation to the Maratha caste in the state, has worked in the ruling party’s favour. With the Bombay high court approving the state’s decision, sources in the BJP have indicated that several senior Maratha leaders have been warming up to the party. “Suresh Patil, leader of the Maratha Kranti Morcha, had extended his support to the NDA in March. His nine candidates, who had filed their nomination in the Lok Sabha elections, withdrew it and decided to support us instead. Since then, several other Maratha leaders, both from the Congress and the NCP have approached us. It is just a matter of time, we would make more names public once the deal is finalised and roles for the new joinees are figured out,” a senior BJP leader claimed.

No such thing as ‘party ideology’ in Maharashtra politics

In the last state assembly elections, both the BJP and Sena had contested elections separately, breaking its 25-year pre-poll alliance. The BJP, in 2014 assembly polls, had emerged the single-largest party, winning 122 of 288 seats. When it failed to reach the majority mark of 145, NCP leader Pawar offered to support the BJP. Pawar claimed that this offer was made in Maharashtra’s interest.

After the support, the Sena, with 63 MLAs, joined the government. The recent poaching, however, has hurt the NCP supremo, and talking to the media in Pune, Pawar said that Fadnavis and his ministers were working towards poaching leaders from the opposition ranks by misusing probe agencies and state-run financial bodies ahead of the assembly polls. Several leaders, including NCP’s Chhagan Bhujbal, are facing probes.

Are the BJP and Sena really dependent on these defections?

Senior Congress leader and former parliamentarian, Sanjay Nirupam has accused that those switching parties are opportunists and were never ideologically with the party.

“We are certainly going through a tough phase. But with these leaders gone, it is clear who is with the party and who is not. We need to consolidate all our energies and fight the upcoming state election with all our might,” Nirupam told The Wire.

When asked if the party accepts its failure in handling the situation, Nirupam said, “I would rather blame the saffron force here. Does the BJP not trust its own cadres to ensure its victory in the state? Why does it need the Congress leadership then?”

Bal terms this trend as a “destructive” one. “They are in a destructive mode right now. They want to ensure there is no opposition in the state. They are sure to win the state assembly elections. But before that, the BJP wants to clear off the Congress-NCP from the state. What happened in Karnataka is also playing out in Maharashtra. In fact, it is a trend across the country. Most of these new entrants might not even have any substantial roles to play in the party. But there they are,” Bal points out.