Politically, there will not be a dull moment in Karnataka for quite some time.

Dissident MLAs of the JD(S) and the Congress meet with Karnataka governor Vajubhai Vala in Bengaluru on July 6, 2019. Photo: PTI

There was a picture in the local newspapers in Bangalore a few days ago. It was of an event organised by a veteran Congress politician. On the stage were some of his senior party colleagues, including those whose names were doing the rounds in the context of the recent IMA scam – a Ponzi scheme in which mostly poor and middle-class Muslims had lost all their life savings.

The person whose event it was also had some history with a co-operative bank, again meant for the welfare of the Muslim community.

Around the same time this event was happening in Bangalore, in Delhi, the dilemma surrounding the decision of the Congress president to step down had not been resolved. Rahul Gandhi was still drafting his July 3 letter that offered a certain finality to his decision to go. Plus, Manmohan Singh, the Congress’ finest mascot in recent decades, had no place from where he could get re-elected to the Rajya Sabha.

In short, the Congress was in a huge flux. But its leaders in Karnataka appeared disconnected from all this.

Forget the crisis within the party, they seemed to care very little about public perception created by the IMA scam when they gleefully posed for pictures and pushed celebratory tweets. There was no remorse, no regret, no reflection, and clearly no sense of urgency to rebuild the party.

Perhaps this is what Rahul Gandhi meant in his letter of July 3 when he said at times “he stood alone”, and that the Congress party had to “radically transform itself”.

But perhaps this is how it has gone on in the Congress for decades. The army has forgotten to wage a war or win a battle.

It is in the backdrop of this indifference that we need to view the latest political crisis in Karnataka when over a dozen Congress MLAs seem to be exiting the party, or using the situation to bargain a better slot for themselves. Nobody is truly worried that the coalition government has become shaky for a hundredth time in a year.

While, one self-appointed ‘troubleshooter’ with a multitude of legal troubles has got fake social media accounts and paid hacks to make him the most ‘obvious and natural’ replacement for Rahul Gandhi, besides being the best bet to be chief minister; another at the helm hopped from one event to another, on the Sunday after the crisis, only to make things look normal.

Both leaders were being delusional, but that is what the Congress is in Karnataka, and perhaps elsewhere too. The public sees through them, and their sham, but they fail to realise the sentiment.

File image of rebel MLAs from Karnataka at a hotel in Mumbai. Photo: PTI

In this particular case, it is often presented that the Congress is losing out to the Janata Dal(Secular) on the ground and therefore the coalition has been, and has become, terribly unstable.

It is argued that the support demographics of the two parties overlap, and hence they cannot be together. This may be true, but this is also a broad air cover of an argument offered for perpetuating feudal politics, power hunger, territorial control and personal ambition, especially in the plentiful Old Mysore or South Karnataka districts.

Let us be honest, does anyone think that top leaders like Siddaramaiah are fighting a battle to safeguard the interests of the Congress? For someone like Siddaramaiah to be subjected to the ‘tyranny and humiliation’ of the Gowda family is a personal affront. He doesn’t mind sitting in the Opposition, but cannot bear to see a Gowda family member bossing over with a tiny group of MLAs.

No wonder that a number of his followers have joined the rebel bandwagon. No wonder it was these MLAs who always made it known in public that their chief minister was not H.D. Kumaraswamy, but Siddaramaiah.

But, the former chief minister does not understand that the coalition government happened because he failed to get a majority; it reflected his five years in power. It had to do with his mismanagement of both 2018 assembly and 2019 parliament elections. There is no shirking this responsibility because he was at the centre of all strategy. 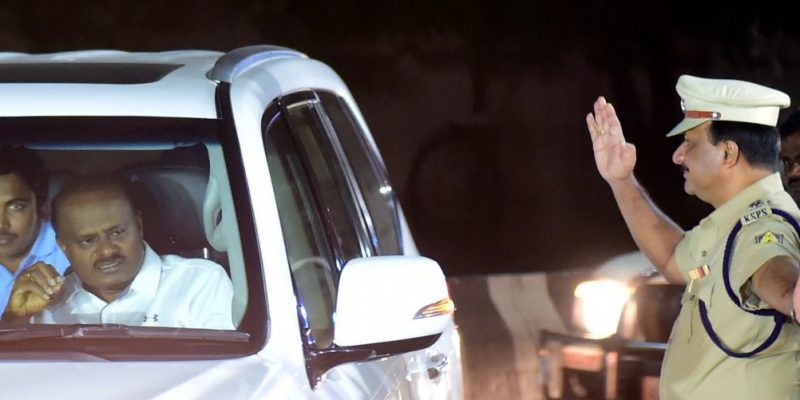 There were honourable ways for him to resist this Congress-JD(S) coalition, but the narrative now being built up in the media may make him look like a party-wrecker. That may, unfortunately, become his legacy in the absence of anything else that is substantial. His decency and progressive talk of all the previous decades will look like a mask that finally came off if he does not help the situation now.

There may be another element that may have loosened the hinges of the coalition government. Siddaramaiah had a personal obligation to Rahul Gandhi, who, he always thought was singularly responsible in making him chief minister in 2013. This was when Sonia Gandhi was AICC president and there were contenders to the chair.

Now that Rahul Gandhi has drifted away in Delhi, the seasoned politician may have quickly shuffled his loyalties to place an even greater emphasis on himself and his deeply nursed rivalries. Not many may know Siddaramaiah has a long history of rebelling against the party he serves, and nurturing a sulk that takes deep roots.

Each time he has had his way in whatever measure. Perhaps, he is trying his luck this time too.

The BJP did not provoke this fresh round of crisis. They have mostly been in the background. They may have advised, lured, built connections and provided logistics, but could any of this have happened if the Congress or JD(S) leaders were not willing partners? If they weren’t looking for an opportunity and stood for something else other than power and money?

One upper caste senior leader from the Congress party has apparently been negotiating for at least nine or ten months with the BJP. They didn’t want him, despite his riches, because they had nothing suitable to offer him, and they were strong enough in the region he came from.

But now, it seems, they may add him to the herd of defectors. The saffron party has gauged that there is a critical mass, and the reasoning wouldn’t be against them when there is a whole herd to cross over.

It makes the BJP look good and powerful, and the Congress-JD(S) weak and purposeless. The performance of the coalition government has anyway tested the patience of the electorate.

But forget ideological commitment, those crossing over from the Congress do not have a sense of history either. They perhaps do not know that many like them who crossed over or aligned with the saffron party, however big, were deflated soon.

Be it Babagouda Patil, Jeevaraj Alva, S. Bangarappa, Srinivas Prasad, D.B. Chandre Gowda, even Ramakrishna Hegde and more recently S M Krishna. They don’t mind their entire political legacies being wiped out, but there is something about the present that makes them succumb. If power is the only glue that holds, the Congress and JD(S) will see more serious damage in the days to come.

Anyway, Siddaramaiah is not alone to blame for the Congress’ decline. Most senior Congress leaders have functioned like private limited companies. If one were to examine the data of the past four decades even cursorily, that is ever since the first non-Congress government came to power in the state under Ramakrishna Hegde in 1983, the party has practically remained growthless. Its average vote share has stagnated at 30.49%.

It has come to power only when others have splintered, that is the Janata Parivar or the Sangh parivar, except in 1989 when Veerendra Patil became chief minister, a goodwill which the party squandered within a year. None of the Congress’ victories thereafter could be analysed as an outcome of a desirous positive vote, but only as default residual memory for the grand old party. The Congress leaders never rode on a new idea or on the support of a new community to come to power.

Also read: Karnataka, a Congress Bastion In the Modi Years, Stormed by BJP

What the BJP is trying to do now is very interesting and far-reaching. They are not interested in power alone. They are in no hurry to make B.S. Yeddyurappa the chief minister again. If at all, they are looking for ways to circumvent his ascension. They are mostly done with him.

Their real intent is to strike deep roots in South Karnataka. They appear tired of being dubbed a Lingayat, North Karnataka party. Their aim is to deepen leadership in the Vokkaliga community. That is precisely why a tottering, forgetful S.M. Krishna was allowed in. For whatever it was worth, he has served as a totem for identity politics in the region. And the results of Lok Sabha polls in the region have been very encouraging too.

Politically, there will not be a dull moment in Karnataka for quite some time in the future starting now.