The Congress Working Committee, which met on Saturday, demanded that the Centre refrain from restricting the autonomy of states to take emergency measures as the second wave of pandemic sweeps across the country. 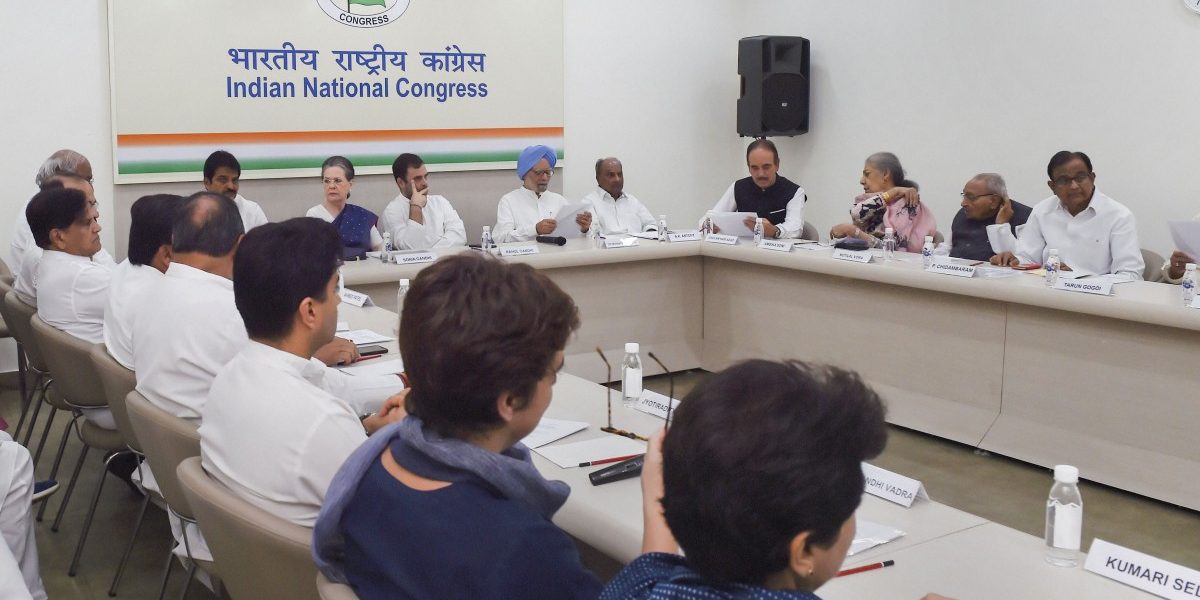 New Delhi: The Congress Working Committee (CWC) met on Saturday amidst all-round criticism of the Centre’s alleged unpreparedness to contain what is now almost a tidal wave of fresh Covid-19 cases. The grand-old party hit out at the Narendra Modi-led Centre for restricting the autonomy of the states at a time when they are required to take emergency measures to contain the spread of the coronavirus.

“India’s first case of COVID-19 was detected on 30-01-2020. India’s first vaccine shot was administered on 16-01-2021. Between the two dates, and thereafter, there is a saga of tragedy, incompetence and colossal mismanagement,” the Congress statement said, adding that nearly 1.5 crore people have already been infected since the last year and around 1.75 lakh people have died.

Earlier in the day, Congress president Sonia Gandhi also trained her guns at the Centre, alleging that Congress chief ministers have accused the prime minister of favouring the BJP-ruled states against those which are governed by the opposition.

“Recently, I had a detailed discussion with the chief ministers of the states ruled by the Congress party as also ministers, where Congress is in alliance government, to take stock of the emergent situation from them. What transpired was the gross unpreparedness and avoidable adhocism on part of the Modi government in foreseeing, evaluating and managing the crisis,” Gandhi alleged, and added that she recently spoke with the Prime Minister to update him of the problems faced by some states.

Even as the BJP leaders have attempted to dismiss criticism against the Centre’s handling of the pandemic, the Congress’s interim president said that it was the BJP that has created “childish and totally unnecessary” debate on “convoluted ‘me versus you’” terms.

She said there has been a “thundering silence on the part of the government” on the alleged “preferential treatment/relief” meted out to BJP-ruled states. She added that the constructive suggestions of the opposition are met with attacks by none other than union ministers. The Congress statement came on the day when union ministers lined up to attack Maharashtra chief minister Uddhav Thackeray’s “PM busy in Bengal” statement.

Later in the day, the CWC released a statement which was called “No Thinking, No Planning”, attacking the Centre of stoking emotions to deal with the pandemic but refraining from taking concrete steps to handle the crisis.

“…at every step, the central government’s response was totally inadequate. In desperation, it fell back upon the strategy of a ‘lockdown’ that had been tried in other countries with mixed results. In the case of India, it was a sudden lockdown without any notice to the people — or even to the state governments — and without any preparation by the Central government. The result was total chaos and a shutdown of all economic activity,” the statement said, pointing at the human tragedy of mass reverse migration of workers.

“An estimated 198 people died on the way,” the party said while calling the large-scale abandonment of workers “national humiliation”.

However, the crux of the CWC meeting lied in its criticism of the government which has managed to use emergency laws to pin its weight on states, and resultantly India’s federal structure.

It alleged that the Centre had failed to rapidly scale up the production and supply of the two approved vaccines in India by providing sufficient funds and other concessions.

It also alleged that the Centre had failed to resort to compulsory licensing and production of the two approved vaccines in other pharma manufacturing facilities in India.

In a list called “grave errors, colossal mismanagement”, the Congress gave pointers on what it thought were a series of small and big measures that the government should have taken but failed. Among the important ones were its failure to universalise the vaccine process, expand production of the two vaccines, empower state government through the opaque PM Cares funds, stop timely exports of vaccines to other countries when India itself needed it most.

Demanding that as a preliminary measure, Gandhi said that the Centre should free “all equipments, instruments, medicines and support required to prevent and treat Covid-19” of the mandatory 12% GST imposition.

“Even basic equipment like Oxymeters and life saving critical equipment like ventilators are subjected to 20% GST. In the current state of affairs, this is inhuman and untenable,” she said.