Congress Should Welcome the Scindia Treachery, Work for the Gandhis' Exit

Otherwise, the Congress, along with the idea of India, will find itself consigned to the dustbin of history. 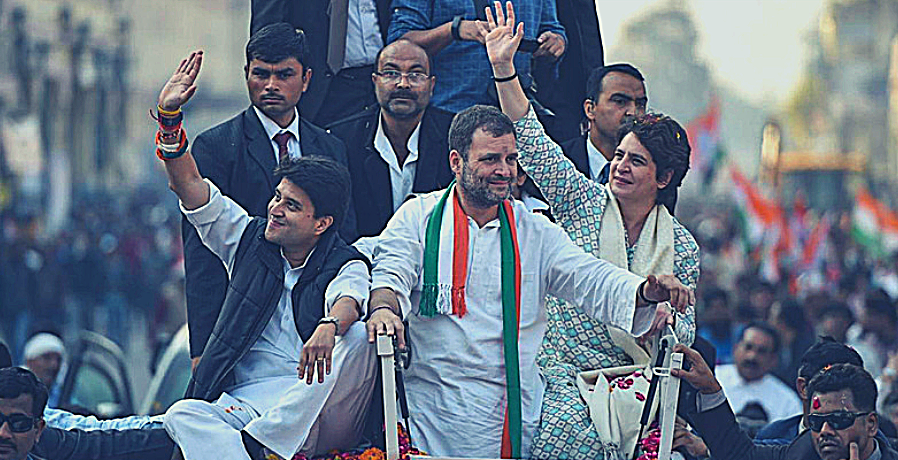 Jyotiraditya Scindia’s desertion to the saffron camp is to be thoroughly welcomed by every liberal, democratic and secular friend of the Congress party.

The Scindia apostasy can only be a precursor to a much-needed and much-delayed Gandhi family meltdown. In fact, the very rank and file of the Congress should seize on Scindia’s defection to demand that the Gandhis make way for a democratic arrangement in the party.

After all, till the other day this man from Gwalior was seen at Rahul Gandhi’s elbow; now that very man has conspired with Amit Shah’s BJP just to settle a few factional scores with fellow-Congressmen in Madhya Pradesh. And, nobody can be sure if he has Rahul Gandhi’s blessings in this act of political chicanery; if not, then it is obvious that the Scindia scion has ignored or rebuffed the young Gandhi’s entreaty to remain true to the party.

Either way, Jyotiraditya Scindia has damned the Gandhis.

In order to momentarily roll back his presumed marginalisation in the Congress, the Gwalior man has advertised to the whole wide world the utterly marginal place the Gandhis have in India’s political future.

The Scindia caper has exposed what every Congress leader knows: as the Congress president, a tentative Sonia Gandhi no longer commands any moral or political authority. Never before in its long history has the party struggled with an uncertain, unsure and yet unamenable leadership as it has in these last five years.

Yet all Congress leaders continue to believe that there is no alternative to the Gandhis.

The Gandhi family’s exalted place in the Congress was based on three manufactured myths:

One, as the only family with a pan-India brand, it alone can garner votes for the Congress and its candidates.

Two, the Gandhis are the only family unifying the disparate Congress leaders, groups, and factions.

And three, only the Gandhis can be the safe custodians of the Congress ideology – its ideals and idealism, especially the much-cherished ‘secularism.’

Like all manufactured myths, these three were only partially operative but were assiduously worked upon to create a kind of order and cohesion in the Congress; the myths also came handy in cementing Sonia Gandhi’s stranglehold over the Congress. And because the Congress was – and, remains, still — a party with an all-India political footprint, it found itself the primary beneficiary when in 2004 the nation wanted to register its disfavour towards Prime Minister Atal Bihari Vajpayee for his failure in performing his rajdharma after the 2002 anti-Muslim riots in Gujarat.

The family myth got hugely recapitalised when Sonia Gandhi heard her ‘inner voice’ and made way for  Manmohan Singh to take over as prime minister after the 2004  Lok Sabha elections. As prime minister, Manmohan Singh brought into play dignity and competence and compassion at the very core of the Indian state.

A grateful nation voted Singh back to power in 2009; what is more, the country did not heed the BJP’s very familiar communal theme-songs nor was it impressed with  L.K. Advani’s juxtaposition of himself as a ‘strongman’ against a ‘weak’ prime minister. The 2009 verdict was as much a vote for a decent, humble, self-made man as it was for the Congress brand.

But the family managers were a concerned lot and they set out to over-knead the three great myths. Predictably, the grand old party brazenly settled down to conducting itself as a family fiefdom. The Vadra shadow began to cast itself on the Congress leaders’ morals and manners. 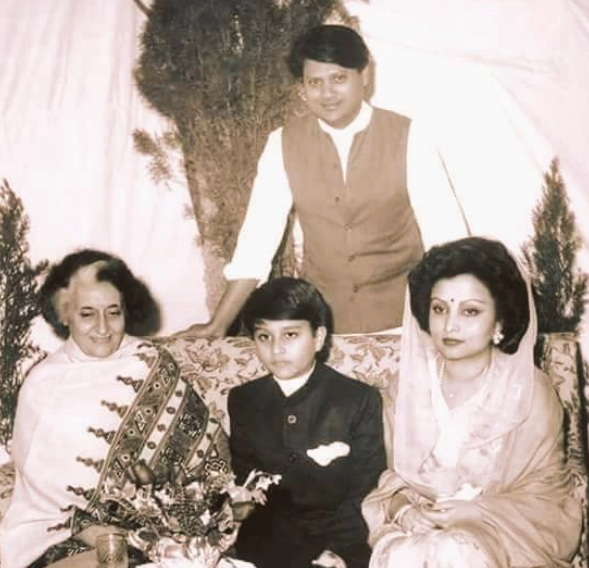 The Scindias, along with a young Jyotiraditya, with Indira Gandhi. Photo: Twitter/@JM_Scindia

Naturally, when the first opportunity arose, in 2014, the nation rejected the leadership claims made in the name of a family. But Congress activists and supporters refused to acknowledge that in part Narendra Modi fascinates the voters – as he did in 2014 and again in 2019 – because he challenges the very notion of entitlement asserted by the Gandhis.

Undeterred, a princely Rahul Gandhi continued to insist that he was entitled to his waywardness, and there was no senior Congress leader with courage or conviction to tell the young man to shape up or ship out.

The Scindia affair has come to highlight the collapse of the high command system. The Gandhis can no longer command nor impose an order or arbitrate among warring Congress warlords in the states. Yet,  Congressmen are not allowed to hammer out the terms of co-existence and solidarity by a dysfunctional high command.

The Scindia betrayal only underlines the unvarnished fact that the Congress party and its leading functionaries are no longer dedicated to any grand transformation or to any noble principles. There is only a  preoccupation with the Gandhis’ pre-eminence as an end in itself.

The shabby details of the Vadras’ financial shenanigans has already robbed the leadership of any kind of aura; but, undaunted, there is now this inexplicable talk of  Priyanka Gandhi Vadra being ‘invited’ to take her seat in the Rajya Sabha from Assam.

For the country as a whole, Scindia’s faithlessness could not have come at a worse time.

Just when a restive citizenry was summoning a new imagination to challenge the communal theology of ‘New India’, the Gwalior royal scion has given an opportunity to a  beleaguered Modi regime to regain the political upper-hand. That the BJP brass is so eager and so unprincipled in admitting to its ranks a thoroughbred, dynastic Congressman from the ‘secular’ stable can hardly add to the saffron party’s claim to be a party of ‘ideology’ and ‘idealism.’ 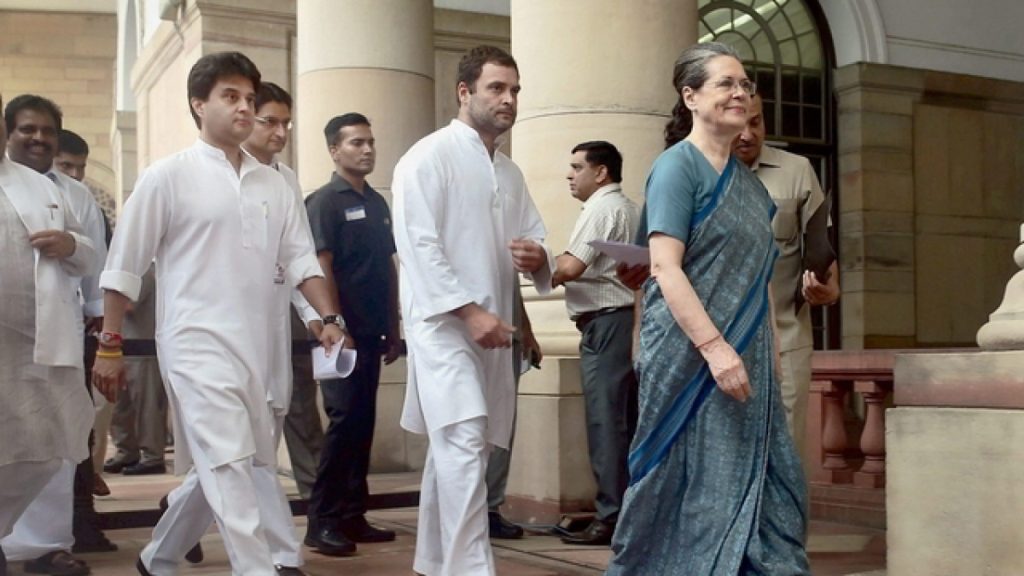 But that can hardly be a matter of consolation for anyone still  concerned with the idea of India.

The Congress’s task remains simple and obvious: it has to reinvent itself as an agency committed to a decent constitutional compact, as a party dedicated to values and practices of social justice, and an instrument for restoration of the stability and moral authority of the Indian state.

This, in fact, is a national imperative. It is time for senior leaders like Manmohan Singh, A.K. Antony, P. Chidambaram, Ahmed Patel, Ghulam Nabi Azad and others to recognise the nature of the crisis. The time has come for these faithful ‘servants’ of the Gandhi family to rise above their personal sense of gratitude and respect for Sonia Gandhi and demand of her that she should initiate a sincere and honest transition away from the family.

Otherwise, the Congress, along with the idea of India, will find itself consigned to the dustbin of history.

The Scindia treachery must be converted into a historic opportunity.