Congress's Chintan Shivir Was a Step in the Right Direction

However, the Chintan Shivir’s hits can easily be offset by some of its misses. New Delhi: Congress’s three-day Chintan Shivir in Udaipur played out like a reunion of party leaders, both young and senior. Several young leaders were happy to get unfettered access to senior leaders in important positions, while the latter got a chance to hear out the grievances of aspirational Congressmen and women.

Chhattisgarh-based Congress leader T.S. Singhdeo had an interesting analogy for the “Nav Sankalp” session. He said that the Chintan Shivir was like the Samudra Manthan (an episode in Hindu mythology describing the Gods and demons participating in churning of the ocean) in which both poison and elixir would be drawn. “Our senior leadership has the courage to consume poison and give out the life potion to our party’s rank and file,” he told The Wire.

Given how the grand old party had functioned like a bunch of scattered units in recent years, the brainstorming session may have come as a much-needed organisation building exercise, if nothing else.

Yet, many would argue that while most of the commitments made by the party to reform its organisation have an unequivocal political and economic agenda and an effective communication strategy, they missed addressing the most significant ailments of the Congress – a leadership crisis and the proclivity of its rank and file to lapse into unsparing indolence. This becomes an even bigger problem when the dynamic and untiring Bharatiya Janata Party  under the leadership of Prime Minister Narendra Modi is its primary rival.

However, it would not be fair for anyone outside the party to understand the Chintan Shivir merely as a cosmetic exercise. The reforms promised in the Udaipur declaration are far-reaching, if implemented organically.

Also read: A Change of Guard Is Not Enough to Solve Punjab Congress’s Problems

Some of the resolutions taken at the Udaipur declaration may go on to re-energise the party solely because of its participatory possibilities. For instance, the proposed creation of a “Mandal committee” between the booth-level and block-level committees may initiate a more democratic process within the party. Similarly, the “One Family, One Person” formula sought to be implemented and the move to restrict the tenure of position holders can enthuse Congress workers who belong to non-influential families.

Of course, the proposed model of reservation in party positions for SC/ST/OBC/minorities and those who are below 50 can usher in a better representative model than what exists currently. If done well, this can massively contribute to the party’s outreach programme among underrepresented communities, a majority of whom currently favour the BJP.

A dedicated election management committee was what the Congress party has sorely missed in recent elections. Similarly, the Chintan Shivir sought to address a crucial problem, of fixing accountability for position holders. This step can draw complacent party leaders out of their slumbers. At the same time, the yatras planned in the run up to the 2024 Lok Sabha polls can re-establish some of the connection it had with the people of India.

These reforms that the Congress intends to put in place ahead of the 2024 parliamentary polls need to be implemented with vigour and within a year’s time to reap any electoral benefits out of them. A few leaders The Wire spoke to said that the national teams have already been formed to oversee the implementation of these reforms in state units of the party. On Wednesday (May 18), the All India Congress Committee met to ensure that the Udaipur declaration is administered as early as possible. It remains to be seen how the state chiefs perform their role in ushering in these changes within the party without making it an unemotional, bureaucratic task. 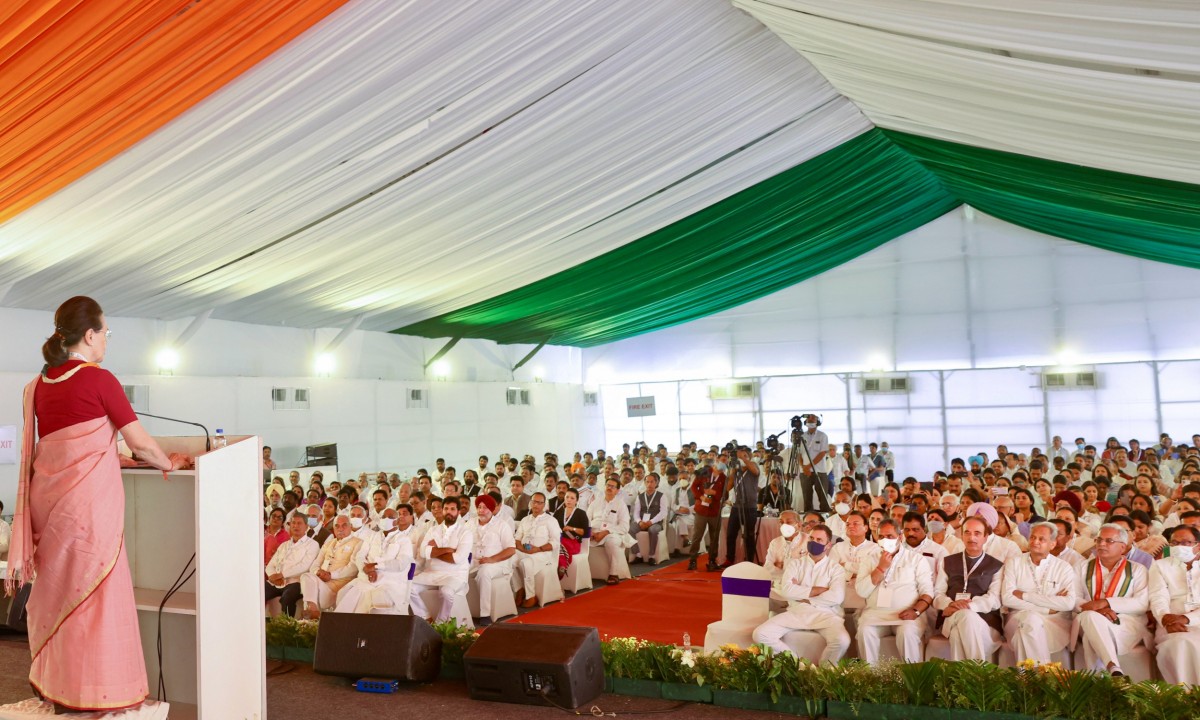 Moreover, the Chintan Shivir’s hits can easily be offset by some of its misses.

Firstly, by steering the Chintan Shivir and being seen as leaders who are ready to institute democratic changes in the party, the Gandhi family has cemented its position within the party. By building direct connection with party workers through the shivir and accommodating the viewpoints of the dissenters, the Gandhi family has neutralised the dissenting section of senior leadership as of now. However, it may not be long before the party implodes again, once the new reforms strip many of the senior leaders from their long-held positions. Moreover, the possible rebellion in the future can erupt in various states, which will be much more difficult to control than the one which was raised by the so-called G-23 groups of central leadership.

Both Sonia Gandhi and Rahul Gandhi appeared to be aware of such a possibility. Sonia’s statement that “the party has given all of us so much, now it is time to pay off the debt” and Rahul’s emphasis on an “ideological” battle with the BJP addressed these concerns. However, such selfless energy in a party like the Congress, which has been mostly a well-oiled patronage system, is easier imagined than experienced.

An instance of such dissonance could be seen in the rather opposite ways in which leaders from different states approached the question of the Congress’s ideology. While northern leaders thought that it was fair to pander to Hindu religiosity, the southern leaders were strongly opposed to it. Much of what Rahul meant by an “ideological battle” with the BJP also remained unclear in light of such opposing opinions within the party.

Therefore, it is all the more important for the party to hold the promised internal elections as early as possible to give a clear ideological direction to the party. This is one of the aspects that went entirely ignored in the Chintan Shivir.

Secondly, the current crop of workers and ground-level leaders that the Congress party attracts in states where it is weak or is the third-largest force are mostly those who have been rejected by other powerful parties. Even if Udaipur reforms are implemented, the possibility that these uninfluential leaders will bring any tangible change in the party’s electoral prospects in 2024 is negligible. Therefore, much of these reforms can only be positive for the party if the leadership in Pradesh Congress Committees (PCCs) and District Congress Committees (DCCs) work overtime to entice and induct persons of influence in their respective centres.

Finally, all the leaders acknowledged that the Congress’s battle is not merely against the BJP but a majoritarian culture that the saffron party has successfully instilled in the public sphere. The Congress has to re-invent itself not only by chalking out a better communication strategy but also by presenting a socio-economic agenda that looks distinct from the one advanced by the BJP.  While most leaders brainstormed about its political and economic agenda in the future, it still has failed to put all of it in one holistic narrative that comes across as different from what the BJP has to offer. The Chintan Shivir did nothing to look at this crucial aspect of the current state of Indian polity.

Rather, Congress leaders, even while steering the six panels made in the shivir to take a clear stance on different socio-political and economic issues, could not shed the arrogance that they have accumulated over the years when the party was in power.

They were more invested in crowding the party’s manifesto than in devising effective ways to tackle BJP’s multi-layered propaganda model with their party’s narrative. Clearly, the thirst to attain power is missing at all levels, as was evident in the three-day event.

The Chintan Shivir was like any other event organised by a political party at the time of crisis. There were both hits and misses. It addressed some of the pertinent problems afflicting the organisation, while it skirted some of the most significant questions that it has had to face in recent times. Yet, if treated as the beginning of a larger reformative process, then it was surely a step in the right direction.