Congress Needs to Return to Its Core Value of Upholding Secularism

The party should not get bogged down with accusations hurled against it by the BJP for its past indulgence of orthodox self-proclaimed representatives of Muslims. The crisis in the Congress party is not its alone but epitomises the challenge faced by every Indian who grew up with the imagination of India as envisioned in the Constitution, in spirit and not just in letter.

Rahul Gandhi has bravely declared that 52 Congress members of Lok Sabha “will fight against BJP every single inch,” and that the brigade, albeit small, had enough “to make the BJP jump every day”.

These are indeed courageous words, although at odds from a leader who displayed the other day, at the swearing-in ceremony of the Modi sarkar 2.0, his political disconnection publicly with other senior leaders of his party. But, the turbulence within the Congress president’s mind for failing to extricate it from the terminal tailspin the party is in for the past several years, is just the proverbial tip of the iceberg.

In fact, the party is caught in a deeper dilemma over whether to wage an ideological battle with the BJP based on its principled inclusive agenda of yore, or should it contest the adversary on programmatic basis after toning down its divergent vision of inclusive India. Prime Minister Narendra Modi being sworn in on May 30, 2019, at the Rashtrapati Bhavan, New Delhi. Credit: PTI

The challenge before Congress

The challenge before the Congress is not to just resolve the crisis it is faced with due to Rahul Gandhi’s intransigence regarding his resignation, although this matter must be settled sooner than later. Rather, the party has to make up its mind on shedding its past diffidence, which has only grown manifold in recent years, on speaking up for minority rights and to uphold secular values.

Instead of allowing itself to get bogged down with accusations hurled against it by the BJP for its past indulgence of orthodox self-proclaimed representatives of Muslims, the Congress must point out that the ruling party has also not aided the ‘Hindu cause’ by peddling fear about the imaginary ‘other’. Instead of being overwhelmed by the rising support of Hindus for the BJP, the Congress must court within the community (the CSDS post-poll survey demonstrates that 56% of Hindus are not yet on the BJP bandwagon) those sections who are yet to fall for majoritarianism.

Also Read: Rahul Gandhi Does Not Have the Luxury of Simply Walking Away

Because of its misdirected engagement within the Muslim community, the Congress has willy-nilly allowed the entire community to be held liable for the actions of a handful who are treading the path of Islamic militancy or jehad.

While part of the problem was ingrained into the Congress’s strategies from the time of the first elections – Muslim leaders were put up only from those constituencies which had a significant presence of the community – this soon degenerated into competitive pandering to conservatives within the community as other so-called secular parties too got into the act.

Even the Congress leadership began believing that to retain support among Muslims, it was essential to remain blind to dangers of minority communalism. As a consequence, Sonia Gandhi was partially correct in observing at a public event in March 2018 that the BJP’s current hegemony was greatly the result of its success in “branding us as a Muslim party”.

But the response to this accusation was neither politically correct, nor did it electorally benefit the party. Till the time Rahul Gandhi’s temple visits were kept private, there was no public mockery of the Congress leader over his religious identity. But, the moment the party decided to make political capital out of these forays, it entered an extremely hazardous terrain.

After having spent decades in devising ways to milk political Hinduism, the BJP would not allow anyone, especially the adversary-in-chief, to wrench the carpet from beneath its feet. The more the Congress showcased evidence of Rahul Gandhi being a practising Hindu, the more vicious did the counter response get. 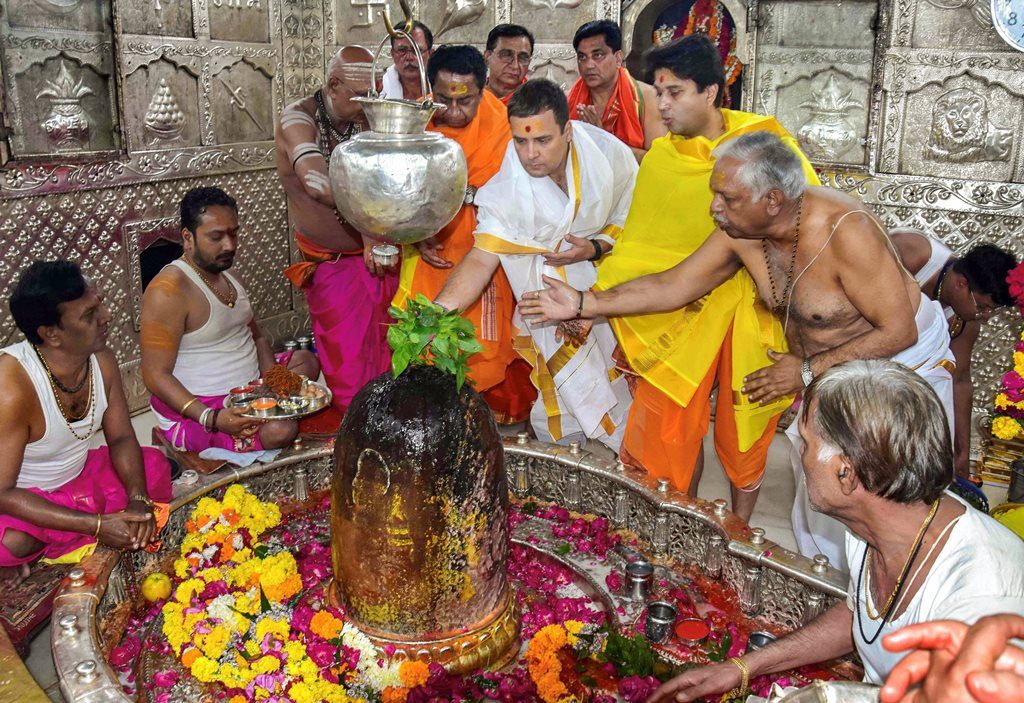 The Congress failed in comprehending that the genre of Modi’s political strategy was completely the opposite of Gandhi’s and if the latter chose to change tactic, he would come a distant second. Indira Gandhi too used temple visits as political stunts, but she could get away with this and also derive political dividends because of connections within the top echelons of Hindu priests. The Congress now does not leverage divisions in the sant samaj even though sections remained opposed to the Sangh parivar and Hindutva politics.

The Congress has to move beyond jockeying with other parties in mollycoddling either majority or minority communalists. It is time to speak up for injustices of various kinds, including the religious minorities, and not engage with power brokers among these communities. The BJP counters accusations regarding its majoritarian intent by starting that its ‘Sabka Saath, Sabka Vikas‘ (Togetherness of All, Development for All) not only does not discriminate on religious lines when identifying beneficiaries of welfare schemes, but to this Modi has recently added the objective of securing Sabka Vishwas (Trust of All).

This provides the opening for Congress by redefining secular values and keep pointing out repeated instances of minority targeting by BJP leaders and this makes the goal of securing universal trust mere glib talk. It is the Congress’s job to argue that the problem it not limited to Nathuram Godse’s action or his glorification. Rather, the trouble is with the ideology and organisations which lay the ground for such actions and assertions.

In his exposition reaching out to Muslims, Modi used the phrase ‘genuine secularism’, which was first articulated in the contemporary political context by Lal Krishna Advani. It is the job of the Congress to point out that this objective would be unattainable if the government remained fixated solely on providing material needs and this being the proof of its impartiality on basis of religious identity.

Democratic societies are not judged only on basis of the government’s performance on roti, kapda aur makaan issues. The BJP will have to ensure justice to each citizen, allow them rights enshrined in the Constitution – and this includes their entitlement to make personal choices provided these do not violate laws of the land, freedom to pursue their faith and protection for adhering to it. But there are apprehensions that Modi Sarkar 2.0 will robustly move towards converting democratic into a politically obedient society where non-majoritarian customs will be demonised and any dissent in any form will be treated as treason.

The challenges before the Congress require no reiteration. But, whatever path it chooses for revival, it cannot be bereft of ideology. There are lessons to learn from the BJP’s transit from what was dubbed by Modi as ‘do se dobara‘ (from two to twice). The BJP has come this far by retaining its distinct identity, remaining firm on its ideology, striking strategic alliances whenever required (even taking a step or two backward – recent examples in Maharashtra and Bihar) and promoting charismatic leadership. The Congress can be anything now but the proverbial deer caught in headlights.

Nilanjan Mukhopadhyay is a Delhi-based writer and journalist. He tweets @NilanjanUdwin