The Congress is set to highlight economic issues more than the defence procurement controversy in the run up to the election. Even its CWC resolution does not mention Rafale even once.

The last CWC meeting in the state was held in 1961. March 12 is also the 89th anniversary of Mahatma Gandhi’s Dandi March.

The decision to host the meet in Gujarat was likely made to make a point to the Narendra Modi-led Bharatiya Janata Party ahead of the general elections.

At the meet, former president of the party Sonia Gandhi and former prime minister Manmohan Singh laid down the focus areas of the party’s campaign. She also said that people should be told that Modi is playing the “victim card” while making them suffer because of his “wrong policies”.

Manmohan Singh, on the other hand, focused on the “agrarian crisis, slow industrial growth and unemployment” under the Modi government.

The former Union minister said that Modi was “trying to divide the people and [was] playing with their emotions for political gains”. He also accused the prime minister of destroying the country’s institutions.

Also read: Priyanka Gandhi Is Embarking on a High-Risk Mission in Uttar Pradesh

The grand-old party emphasised that it was committed to an inclusive growth model. Its resolution said,

“The Congress Party will approach the people of India with humility to seek their support in the forthcoming elections for itself and its allies in different states. A mandate for better governance and accountability, to repair the grave damage caused to our democratic polity, economy and society by the Modi government, a mandate for change to restore the health of Indian economy, for job creation, social justice and harmony.”

On the anniversary of Gandhi Ji’s historic Dandi March, the Congress Working Committee in Ahmedabad, resolved to defeat the RSS/ BJP ideology of fascism, hatred, anger & divisiveness. No sacrifice is too great in this endeavour; no effort too little; this battle will be won. pic.twitter.com/w6PhAIbYMs

“CWC endorsed the promise made by the Congress president to ensure minimum income support to the poor, weak and marginalised sections of society when the Congress party comes to power,” it added.

The CWC invoked the role of India’s founding fathers in creating a harmonious and composite culture in India. It also condemned the killing of CRPF jawans in Pulwama last month as a “dastardly terror attack” and expressed its solidarity with the Indian armed forces.

The party also attacked the BJP and the prime minister for “cynically exploiting the issue of national security” for electoral gains despite the fact that all political parties were united in the fight against terrorism.

It said that the Modi government failed on various fronts, mostly highlighting the “hasty implementation of a flawed GST, demonetisation that disrupted the Indian trade and led to shutting down of “lakhs of factories” and MSMEs. The CWC statement said that such poorly thought economic policies have led to a an unprecedented growth in unemployment and rural distress.

The party also recalled the NPA controversy: “National savings and investments have sharply declined, Banks are burdened with NPAs and credit off-take of the industry has reached a record low. Exports are stagnant and industrial production has been falling continuously notwithstanding government’s boastful and misleading claims.”

The resolution stated that “an atmosphere of fear and insecurity is all pervasive particularly among women, students, academics, writers and the business community” and that “there are deliberate attacks on the constitutional and other safeguards for scheduled castes, scheduled tribes, OBCs and minorities”.

What is interesting, however, is that the resolution did not mention the Rafale controversy even once.

A senior Congress leader told The Wire that the party will change tack for the campaign and highlight economic issues more than the defence procurement controversy. “Rahul Gandhi will not stop speaking about Rafale controversy. But our focus now will be broadly on issues that concern the poor. The Congress has showed that what it promises, it also fulfills.”

He said that the Congress president had promised loan waivers for farmers before the assembly elections in Rajasthan, Madhya Pradesh and Chhattisgarh and the party implemented it immediately after coming to power in these states.

However, when asked why the Congress president still focused on Rafale in his speech at Gandhinagar, he said that the party was not going to abandon the controversy.

“It is a scam. Rafale deal exposes Modi’s double standards. The prime minister speaks about armed forces in all his political meetings, but in real weakens the air force by gifting Anil Ambani a multi-crore defence deal.”

Later the Congress president confirmed that even though he will continue to talk about Rafale deal, the twin issues of unemployment and farmers’s distress will be the party’s main focus.

Addressing the media at Gandhinagar, he said, “I am clear… the unemployment rate is the highest in 45 years and it has happened during Modiji’s government… The primary issues we will focus on are unemployment, farmers’ issues, and prime minister’s own corrupt role in Rafale deal.”

The day was also one with heavy with political messaging. First, before the CWC meet, the Congress leaders paid their tributes to Mahatma Gandhi at the Sabarmati Ashram and soldiers at a memorial.

Second, at a massive rally in Gandhinagar, Priyanka Gandhi gave her first political speech outside her family pocket boroughs of Amethi and Raebareli in Uttar Pradesh. She likened the upcoming general elections as nothing less than “the independence movement”. 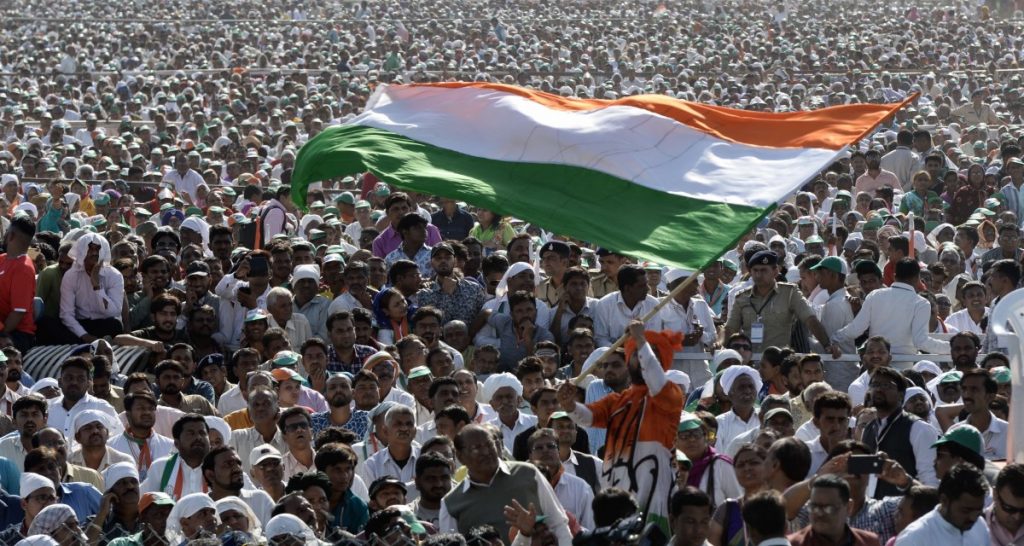 “Your vote is your weapon. Make the right decision, ask the right questions… Think and decide – those who talk big in front of you, where are the jobs they promised? What about the Rs 15 lakh in every bank account that they talked about?,” she said while addressing the large gathering.

Taking a dig at Modi, who had recently said, “Chun chun ke hisab lena mera fitrat hai. (It is my nature to avenge every wrongdoing)” to attack Pakistan after the Pulwama attack, Priyanka said, “Those who talk about fitrat (nature), the fitrat of this country is to seek the truth, the fitrat of this nation is to blow away the winds of hate with love.”

Third, Patidar leader Hardik Patel – who despite having locked horns with the BJP several times over the last few years had not associated himself with any political party – formally joined the Congress.

The BJP tried to beat the Congress’s optics by inducting rebel leaders of the Trinamool Congress in its New Delhi party office  and its spokespersons emphasising that Congress MLAs from Gujarat are deserting the party ahead of the elections.

Over the last months, four Congress legislators — Jawahar Chavda, Parshottam Sabariya, Vallabh Dharaviya and Ashaben Patel — have joined the BJP, with Congress accusing the saffron party of conducting an “Operation Lotus” on the lines of Karnataka to poach its party MLAs and MPs. A large section of media reported that more opposition leaders may join the BJP rank as the elections come closer.

The CWC meeting on Tuesday was held against the backdrop of BJP’s aggressive campaign on the Indian air force strike at Balakot, Pakistan in the aftermath of the militant Jaish-e-Mohammed attack on a CRPF convoy in Pulwama, Jammu and Kashmir.

After the Pulwama attack, the Congress had looked unsure about its electoral strategy. With its Gujarat meeting, it appears that the party is bracing itself for a fierce electoral battle.