The tape allegedly shows a man facilitating the exchange of Rs 5 crore after the December 31 deadline – proof, the Congress said, that the note ban was meant to enrich the ruling party. 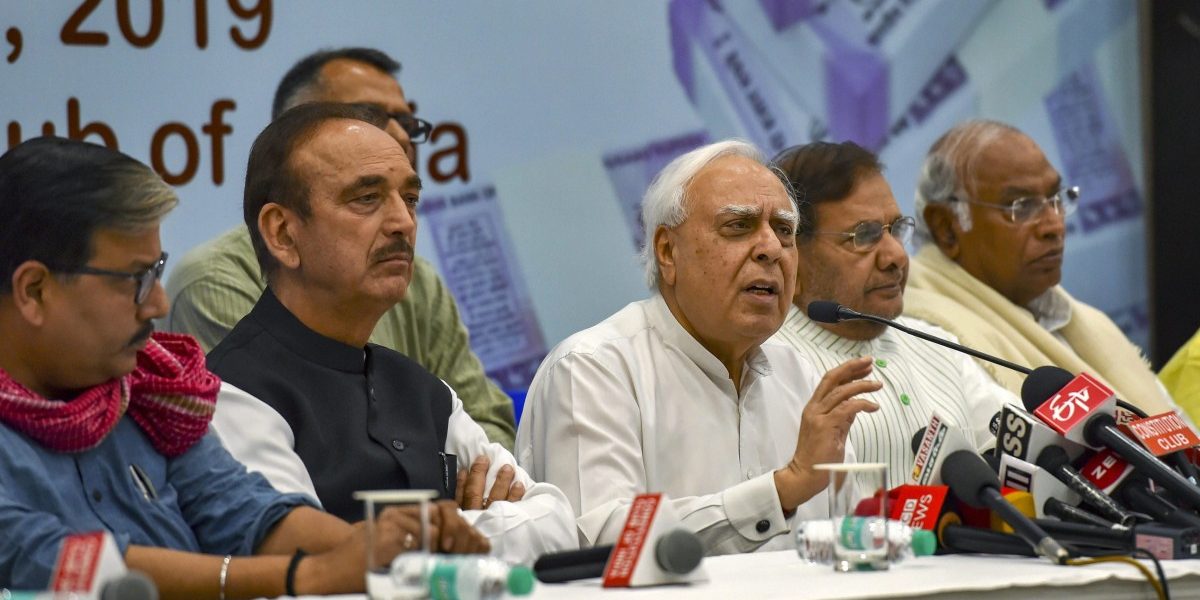 Kapil Sibal speaks as Ghulam Nabi Azad, Mallikarjun Kharge and Sharad Yadav look on during a joint opposition press conference on the failures of demonetisation at the Constitution Club in new Delhi on March 26, 2019. Credit: PTI/Subhav Shukla

New Delhi: The leaders of several parties aired an incriminating sting video today, and attacked the ruling Bharatiya Janata party on the issue of demonetisation. They called the note ban, announced on November 8, 2016, a failed monetary experiment – one that enriched the ruling party at the expense of ordinary citizens and the Indian exchequer.

“Many units closed down and crores of people were rendered unemployed. But what was demonetisation. One type of currency was removed, another introduced. Many alleged demonetisation was to help the ruling party. But we had no proof then. Today, Mr Sibal would present the proof before you,” he said.

Former Union minister and senior advocate Sibal then recalled how in his demonetisation speech of November 8, 2016, Prime Minister Narendra Modi said that Rs 500 and Rs 1,000 notes would no longer be considered legal tender. Then, he said, a number of notifications followed but restrictions were imposed on withdrawal of currency and deposit of old currency was allowed in banks only up to December 31, 2016.

“The prime minister said the exercise would end corruption and black money, but did not tell the real truth behind it. The exercise was used to loot the poor, some ‘chowkidars’ betrayed the nation and money was picked from ordinary man’s pocket,” Sibal charged.

Sibal said several BJP people played a role in this. He said all the money shown in the tape was exchanged after December 31, 2016. “That could only have been possible with the help of banks, police, political leaders, bank managers, officials and other people sitting at the top.”

The Congress leader said, “We saw this tape on public domain and websites. This is a 30-31 minute tape. But we will only be showing you an excerpt of about 18 minutes.” 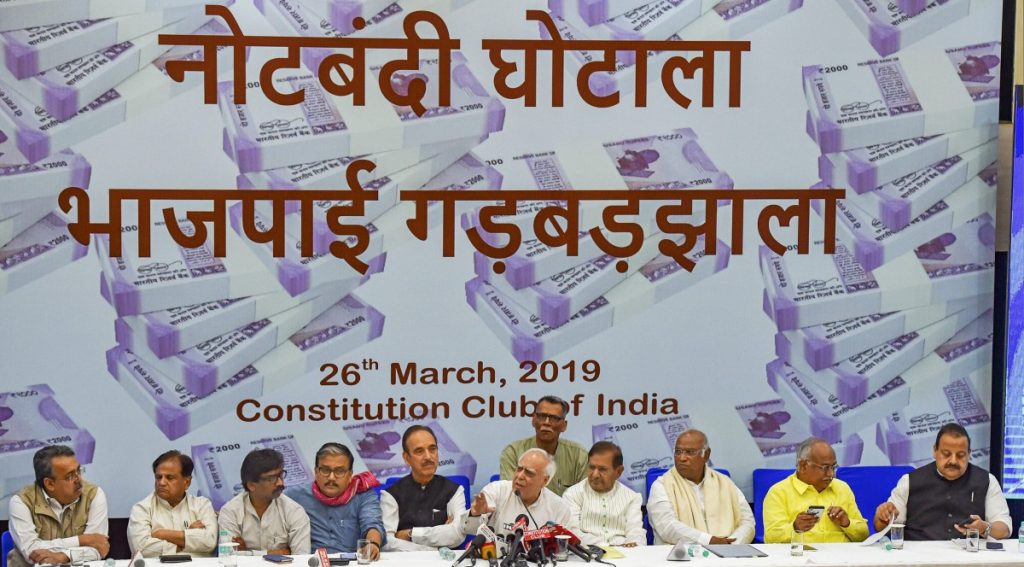 He said there was a major conspiracy behind demonetisation. “No one can commit a bigger crime against the nation, this is nothing but treason. What can be a bigger crime than looting the exchequer and enriching the party?”

The tape was then played out, with captions like “demonetisation scam” and “the biggest fraud ever” flashing over it. A baritone voice explained that the tape was prepared by seven journalists. It said for some time they were feeling suffocated that their editors and owners were imposing sanctions on them to not report fairly about the government.

The voice in the tape said they approached a BJP worker in Ahmedabad and told him that they would like to exchange Rs 5 crore in old currency. The worker then allegedly took them to a BJP office in Gandhinagar. The tape showed the worker moving in the party office while talking over a phone.

The group was then asked to go to a farmhouse located four-five kilometres away. The tape then showed a bearded man sitting across the table. He asked about the references to which the undercover reporter gave the names of “Prasann bhai” and “Pradip bhai”.

When asked to explain, the undercover reporter said the money belonged to a group of transporters and builders. He said over Rs 100 crore were lying with him but he could only get Rs 10 crore at a time as police checking was on. At this, the bearded man on camera said: “Who do you fear, no one will touch you. You get Rs 25 crore in one go.” He also picked up a magazine with a photo on the cover to say they had the blessings of people right at the top.

After the tape was played, Sibal took a dig at Modi for prefixing his name with ‘chowkidar’. “After watching this video clip, the country has to decide who is chor (thief) and who is chowkidar (guard)? Who is a patriot and who is an anti-national?” he said.

The gathering was also told that the tape was hosted by on a website – tnn.world.

Congress president Rahul Gandhi also issued a tweet soon after the press conference. In this Gandhi said: “They did demonetisation and Gabbar Singh Tax” but “we will give NYAY and a real GST”.

They did Demonetisation and Gabbar Singh Tax.

We ✋will give NYAY and a real GST.