The Congress called the move "immoral, illegal, and unconstitutional" and is likely to move the Supreme Court against the governor's decision. New Delhi: Disregarding the list of 117 MLAs who say they are backing Janata Dal (Secular) leader H.D. Kumaraswamy’s claim to form the government in the state, Karnataka governor Vajubhai Vala announced on Wednesday night that he would be swearing in BJP leader B.S. Yeddyurappa as chief minister at 9:30 in the morning on Thursday and giving him 15 days to prove his majority on the floor of the assembly. 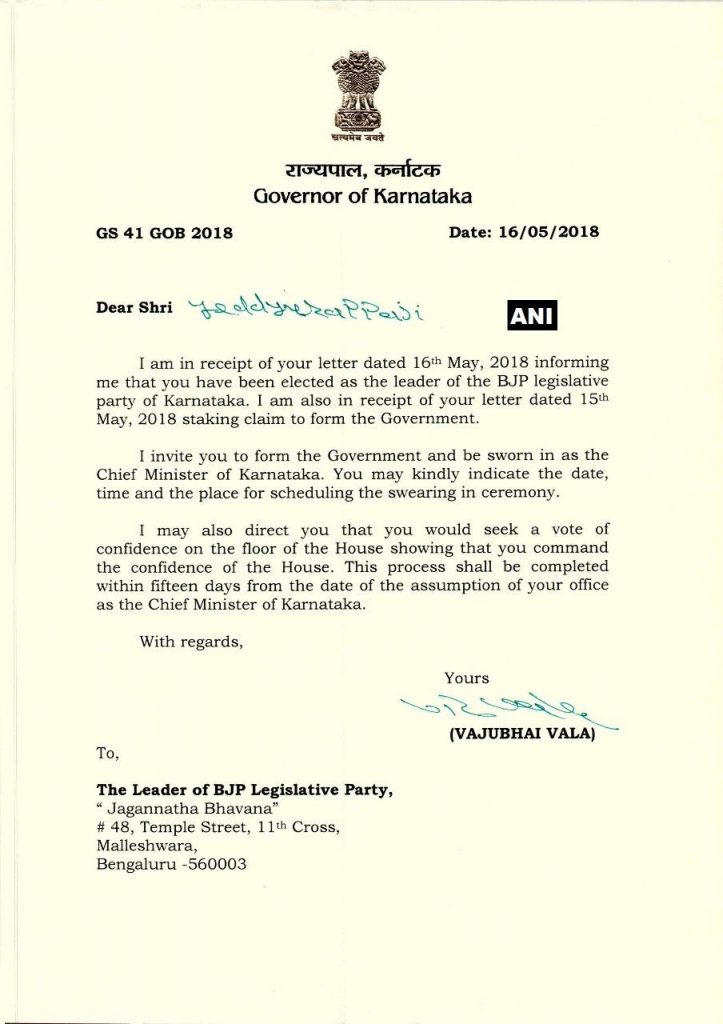 The announcement was met with anger by the JD(S) and the Congress. At a hurriedly convened press conference in the capital even as news was emerging of the governor’s decision, senior Congress leaders said this was a violation of the Supreme Court’s order last year in the Goa matter.

More so, there was a bit of confusion as BJP’s official twitter account tweeted at 8:31 pm that Yeddyurappa would be sworn in as the chief minister, only to quickly delete it, leading many on social media to question whether the party had put up the tweet in a hurry without official confirmation. 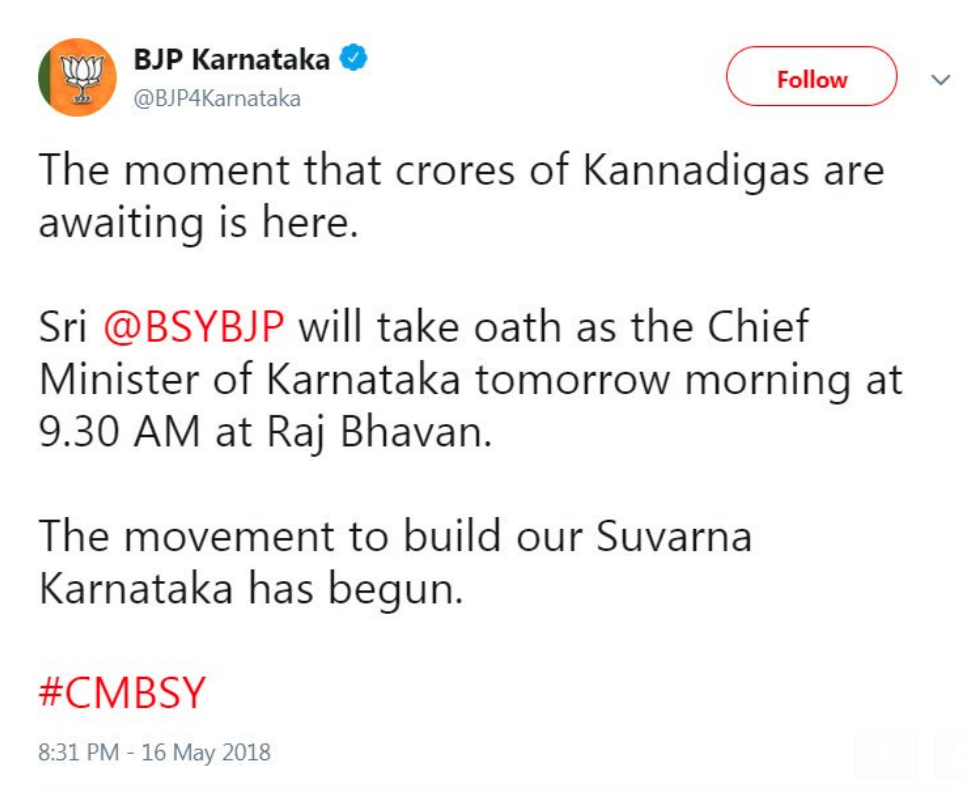 Tweet put out by the BJP in Karnataka. Shortly after it was issued, the party deleted it, presumably to await the official communique from the Karnataka governor’s office,

But less than an hour later, the BJP tweeted again with the same line “the moment that crores of Kannadigas are awaiting is here”, but with a change in the time of the swearing in ceremony.

The moment that crores of Kannadigas are awaiting is here.

Sri @BSYBJP will take oath as Chief Minister of Karnataka tomorrow morning at 9.00 AM at Raj Bhavan.

The movement to build our Suvarna Karnataka has started. #CMBSY

More so, BJP took a jab at those who had rushed to criticise the deletion of its earlier tweet.

Sorry, we had got the time wrong in our earlier tweet. And yes, we know it’s tough for you & your ilk to swallow this, but the swearing in ceremony is 30 mins earlier.

And please give your lecture on saving democracy to those who are trying to subvert the people’s mandate. https://t.co/ZkVelNlaUe

“Tomorrow, an illegitimate and immoral government will take oath under Shri B.S. Yeddyurappa, unsanctioned by the law and in negation of the constitution. It is a black letter day for India’s constitutional norms and our democracy,” he added.

Targeting the governor, Surjewala said that Vajubhai Vala has “soiled for ever the high dignity office of governor and faith of the people”.

He said that the letter of invitation by the governor “clearly establishes” that even the governor does not believe that Yeddyurrappa has a majority.

He said that while Amit Shah and other BJP leaders were “giving sermons” that the post-poll coalition between the Congress and JD (S) was illegitimate, he wanted to ask, “If a post-poll coalition having clear majority numbers does not have the right to form a government, then why did the BJP with only 12 legislators as against 18 MLAs of Congress (which emerged as the single-largest party) to form the government in Goa?” He also cited the case of Manipur where the similar developments took place.

To counter the BJP’s argument JD(S) and Congress fought the polls against each other and therefore the alliance is opportunistic, Surjewala added that both the Maharashtra Gomantak Party and Goa Forward Party fought the election with a solid anti-BJP stance but yet, the governor approved of the post-poll coalition that the BJP conjured up.

He said that Vala does not have the moral right to hold the office of governor even for a day now and demanded his resignation or suspension.

The events of the day

Earlier in the day, a delegation led by Kumaraswamy and KPCC president G. Parameshwara met the governor after both the parties held legislature party meetings Wednesday morning.

“In a post alliance of JD(S) and Congress and our pre-alliance with BSP, we all together have 117 MLAs and the letter of their support has been given to governor,” Kumaraswamy told reporters after the meeting.

He said both parties had also submitted the resolutions about their alliance passed in both their legislature party meetings to the governor.

Kumaraswamy said the governor told the delegation that after consulting legal experts on the Supreme Court judgments, he would “come to a decision and inform us about it”. Next step has to be decided by the governor, he added.

“Governor said he will decide about considering our claim in accordance with the Constitution. I hope that he will abide by the constitution and give his direction,” he said.

Kumaraswamy said all the JD(S) MLAs “are in tact with us”.

Parameshwara said a copy of the resolution passed at the Congress Legislature Party was submitted to the governor.

The governor said he would act in accordance with the law, based on apex court judgments and as per the constitution while also looking at precedents followed earlier in states like Goa, Mizoram, Nagaland and Manipur, he said.

Some MLAs from both JD(S) and Congress were part of the delegation.