As BJP Plays With Fire, Campus Crackdown Gives Divided India Cause to Fight For

Political parties, university students, and men and women from all walks of life have put up a show of rare unity. But BJP could not be bothered less in its steadfast march towards religious polarisation. 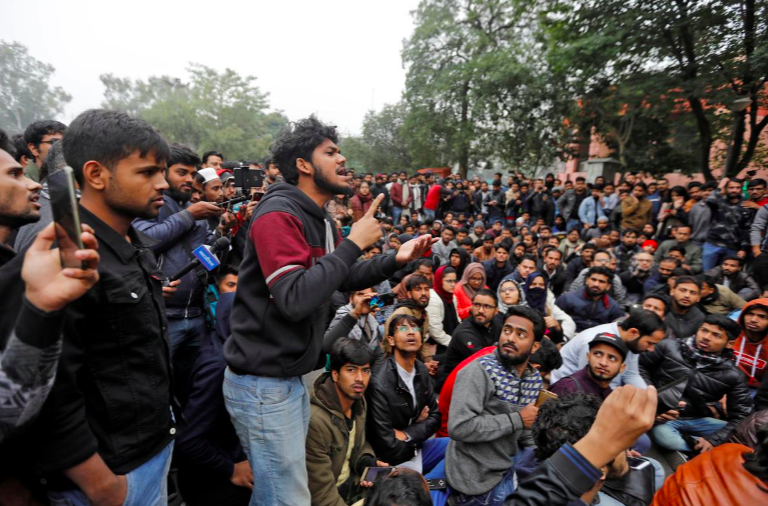 Jamia students at a protest after Delhi Police entered campus and unleashed violence on students on December 15. Photo: Reuters.

New Delhi: When armed police and paramilitary forces entered university spaces in the national capital and Aligarh on Sunday evening, one had an inkling that something was wrong by design. But when the prime minister Narendra Modi himself attempted to dismiss the students’ movement against the amended Citizenship Act (CAA) as merely a Muslim backlash, one knew that something was rotten in the state of India.

The BJP-ruled Centre is now playing with fire.

On December 15, a ghastly Sunday evening began with police brutally beating up protesting students at the Jamia Millia Islamia and Aligarh Muslim University, not even sparing those who were quietly studying in the library.

But it finished with scores of BJP leaders, including the BJP ‘IT cell convener’ Amit Malviya and Delhi BJP spokesperson Tajinder Pal Singh Bagga, posting doctored videos on Twitter to equate the ongoing student’s movement against the CAA with “a clarion call for ethnic cleansing of Hindus”.

It was midnight that belonged to scores of democratic-minded citizens who gheraoed the former Delhi police headquarters at ITO against the arbitrary police action in the universities.

The crowd swelled through the night as protest slogans rang through the air. Chants of “Delhi police, Jamia choro (Delhi police, leave Jamia)”, “Bol re saathi, halla bol, Delhi Police pe halla bol (‘Rise my friends, rise against Delhi police’)” echoed as students and teachers from different universities, civil society members, and professionals, from across all castes and communities, gathered at the spot.

They dispersed only when top-ranked officers assured them that around 52 students, many of them severely injured, who had been detained in the two police stations – Kalkaji and New Friends Colony – would gradually be released. 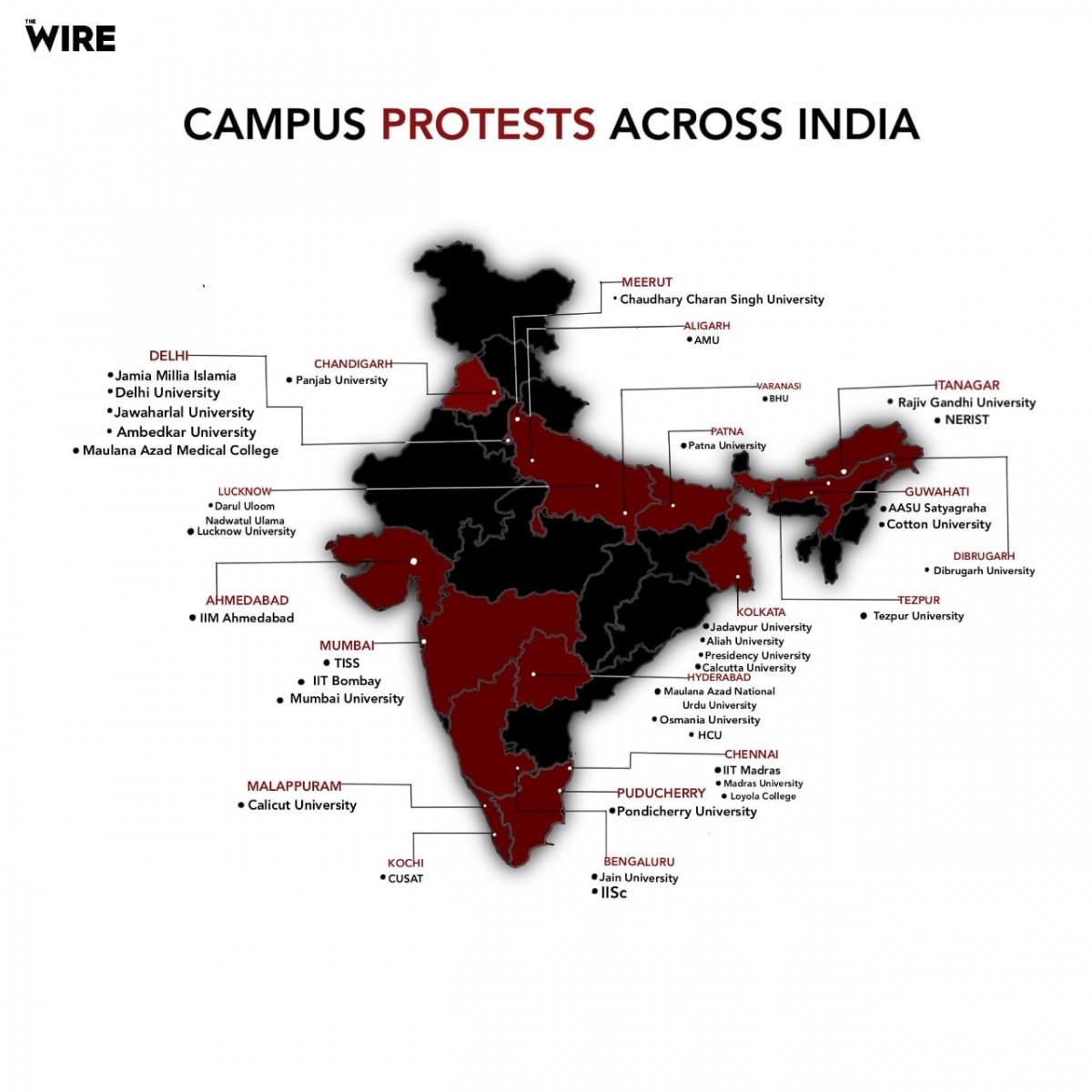 Ever since the Citizenship (Amendment) Bill was passed in the parliament on December 11, protests and agitations have gripped India. The feeling of unrest in a large section of Indian population, especially among 172 million and around 31 million Assamese, is palpable.

The situation is Assam continues to be volatile as intermittent internet shutdowns and a curfew-induced price hike of essential commodities has virtually cut-off the state from any sort of normal living. Scores of prominent personalities have come out in the open to show their discontent against the controversialAct.

Violent incidents in West Bengal have also been reported as people remain anxious about the impact of the CAA in their state which has seen a stream of migrants from 1947 to 1971. Protestors torched five trains, three railway stations, and at least 25 buses last weekend. 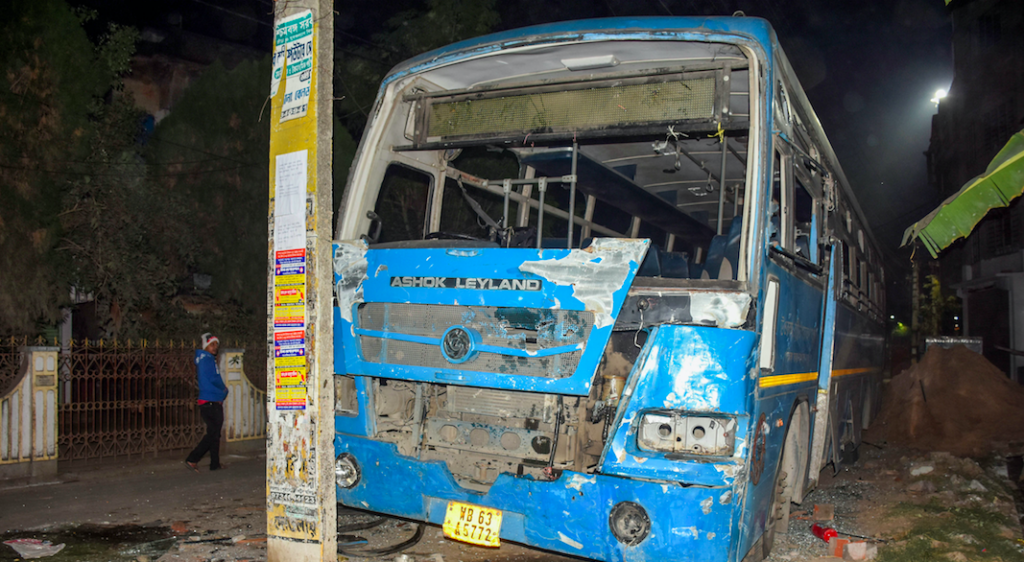 Charred remains of a bus set on fire by protestors agitating against NRC and CAB, outside Beldanga station in Murshidabad district of West Bengal, Friday, December 13, 2019. Photo: PTI

Not merely these, but students of Indian universities too have been taking out marches against the CAA, which seeks to enable Indian citizenship for only non-Muslim immigrants from Bangaldesh, Pakistan, and Afghanistan.

Several IITs on Sunday rallied in support of the Jamia and AMU students. So did many other central universities and the Mumbai-based Tata Institute of Social Sciences (TISS). Most state capitals, including Chennai, Bengaluru and Kolkata, and many district centres have either already organised protest marches or have planned so in the days to come.

The CAA has been so contentious that many opposition political parties, who usually are on the wrong side of each other, have come together to protest against it. At least six chief ministers – Mamata Banerjee, Arvind Kejriwal, Amarinder Singh, Bhupesh Baghel and Kamal Nath – have declared that they will stop the Act from being implemented in their states.

Perhaps, for the first time after the Shah Bano case, civil society groups and opposition political parties are perfectly aligned with each other in opposing an Act which was only recently passed in parliament by a good majority.  Such has been the opposition that BJP allies like the Janata Dal (United) and Asom Gana Parishad are now rethinking their decision to support the Bill.

On Monday, Congress leader and former president of the party Rahul Gandhi termed the Citizenship Amendment Act and the National Register of Citizens as “weapons of mass polarisation.”

Priyanka Gandhi Vadra led an agitation at the India Gate, the centre of the national capital, against the police crackdown on students.

The CAB & NRC are weapons of mass polarisation unleashed by fascists on India. The best defence against these dirty weapons is peaceful, non violent Satyagraha. I stand in solidarity with all those protesting peacefully against the CAB & NRC.


Demanding a judicial probe on the police brutality against students, Azad said, “How could the police enter Jamia and unleash such brutality on the students when university authorities did not allow the police to enter inside.”

He added that if the university vice-chancellor did not give permission to the police to enter the campus, the only way it could have got in was with the orders of the Union home ministry under which the Delhi police functions.

Even amidst so much unrest, the Centre’s response has been authoritarian. According to various reports aired on television channels on Sunday, the union home ministry under BJP president Amit Shah has ordered the police to deal with the protests, which have largely been peaceful, with an iron hand.

As was evident from social media posts of various BJP leaders, the saffron party has been trying to inaccurately paint the protests as communal even when it is far from it.

That the prime minister himself indicated at an election rally in Dumka, Jharkhand that the protestors were Muslims is a hint at what the BJP is doing. The party appears to see in this state of chaos and paranoia an opportune moment to polarise Indian society on religious lines even further.

Such dog whistle politics should not come as a surprise as the BJP has historically benefitted electorally from ethnic conflicts. Jharkhand elections are underway; Delhi will soon go to the polls in the month of February, 2020.

As The Wire reported earlier, the prime minister’s veiled attack on the Muslims in Jharkhand – much like what he did in the last Uttar Pradesh assembly polls by drawing a distinction between shamshan (crematorium) and kabristan (graveyard) – comes at a time when the BJP workers have been attempting to drive a wedge between adivasi and non-adivasi voters on one hand and the minority Muslim population and Hindus on the other.

Similarly, the police crackdown on a Muslim university too comes at a time when Arvind Kejriwal, the Aam Aadmi Party’s Delhi chief minister, is being largely considered as the most popular leader of the national capital. Only two days ago, the independent think-tank Lokniti-CSDS released its survey findings. Most Delhi residents said that Kejriwal has fared well on fronts of education, health and transport.

While Modi too remains popular in Delhi, according to the survey, voters were aware of the context of assembly polls. And that is why when both Modi and Kejriwal were pitted against each other by the surveyors, 42% voters chose Kejriwal over Modi while only 32% chose Modi over Kejriwal.

This political competitiveness reflected in the way BJP and AAP fought over Sunday violence. Manoj Tiwari, Delhi BJP president and possible chief ministerial candidate, took hardly anytime before he accused the AAP for the violence in Jamia Millia Islamia.

AAP leaders hit back with a video that showed police personnel pouring some liquid in the bus that was torched, blaming the police, and thus the Centre, for the arson.The political dogfight, however, was based on entirely unverified information.

Despite agitations spiralling, the Centre has remained unaffected by the widespread paranoia among communities, and has shown no signs of backing out. If, indeed, such politics of polarisation divides the electorate on religious lines, BJP would be a natural beneficiary, given its Hindutva leanings.

However, that may come at the cost of substantive disintegration of the Indian society, which has remained multicultural despite its flaws. The CAA, and politicking around it, has the potential to permanently damage this fabric.