The BJP has called for the creation of two separate states out of Bengal, one in the north and one in the southwest.

Kolkata: Bengal Bharatiya Janata Party president Dilip Ghosh on August 21 supported the demand for carving out two new states out of West Bengal, one for north Bengal and the other for the southwestern region of the Jangalmahal.

Ghosh said that BJP was simply voicing the sentiments of the people of those regions who had become fed up with continued government neglect, leading to underdevelopment.

Supporting demands for division of states is not new for the BJP. In West Bengal, too, the party has benefited out of its alliance with the Gorkha Janmukti Morcha, which was born in 2008 to fight for a separate state of Gorkhaland in the Darjeeling hills and adjoining areas, between 2009 and 2020.

However, BJP had distanced itself from its Alipurduars MP John Barla’s statements when he first raised this demand in the immediate aftermath of the assembly election.

Ghosh had at that time said that Barla’s demands reflected his personal opinion and not of the party. “The BJP is for one West Bengal,” he had said. 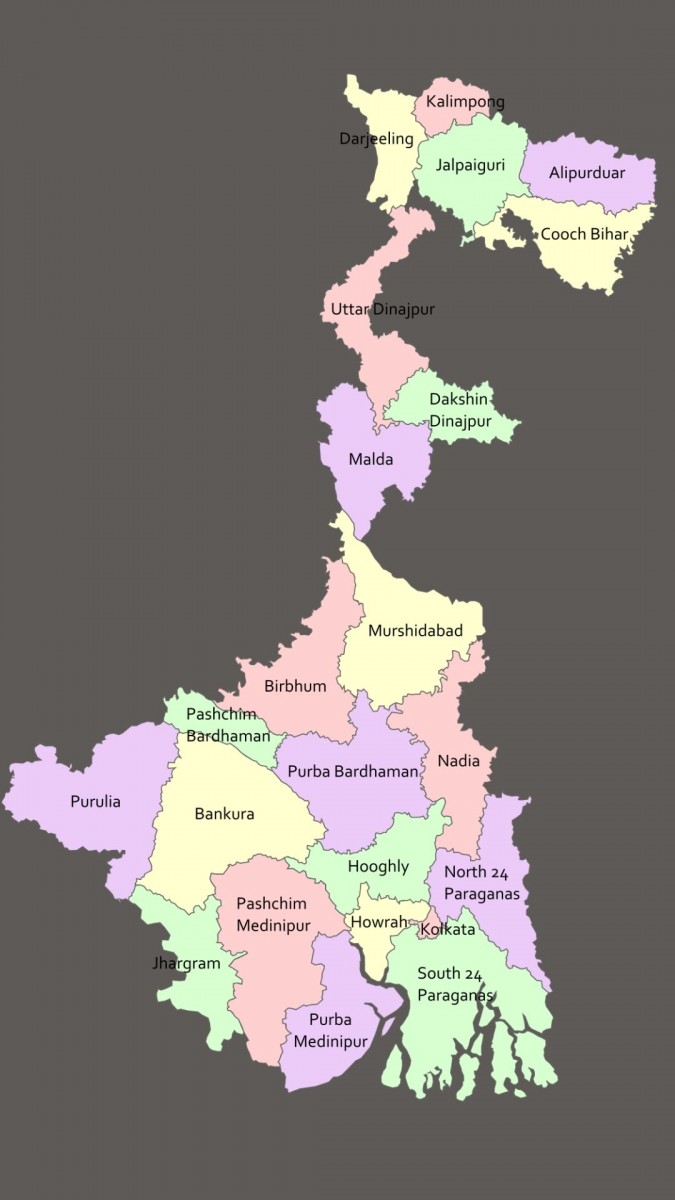 Around the same time, however, the leader of the opposition in the state assembly, new BJP entrant Suvendu Adhikari, said that people of the state’s southwestern region were in favour of a separate state.

Three months since then, the party seems to be aligned to Adhikari’s view.

On Saturday, sitting next to Barla, who bagged a minister of state berth in the Union cabinet in the recent reshuffle, Ghosh said that if North Bengal and Jangalmahal wanted to separate from West Bengal, only Mamata Banerjee could be blamed for this.

“In 75 years since Independence, why has north Bengal been deprived of development? People need to go outside the state for jobs, education and healthcare. Why is there no good school, college and hospitals, no industry and income generation opportunities? The situation in Jangalmahal is the same. The women still depend on collecting saal and kendu leaves. Why do they have to go to Ranchi, Odisha and Gujarat for jobs? Don’t they have the rights to enjoy the benefits of Independence? If they made such demands, it’s not unjust.”

Supporting Barla, who repeatedly demanded a separate state of north Bengal, even after bagging the ministerial portfolio, Ghosh said, “It is Barla’s responsibility to listen to the people who elected him and to voice their demands and concerns.”

However, when asked what his party’s stand on these issues was, he vaguely replied, “The party has its own stand. The party will think about it.”

Further justifying their role, Ghosh said, “The demand for Gorkhaland state is being raised for many years. But Didi ran her government in understanding with them. She signed the Gorkhaland Territorial Agreement that kept the statehood demand alive. No one raised a question then. But now when we are raising the voice of the people, we are being called separatists!”

Incidentally, Ghosh’s remarks came a day before Raksha Bandhan, celebrated as Rakhi festival in Bengal, an occasion the Nobel Laureate cultural polymath Rabindranath Tagore used in 1905 to protest against the British administration’s decision to partition the Bengal province.

On Sunday, the TMC organised a rally on the campus of the Tagore-founded Visva-Bharati University at Shantiniketan in Birbhum district commemorating Tagore’s participation in the 1905 Rakhi festival and pledged to prevent another partition of Bengal.

Taking digs at the BJP on Twitter, Bengal education minister Bratya Basu quoted an iconic line from leftist poet Sukanta Bhattacharya’s poem that, when roughly translated to English, goes: “The soil of Bengal is unconquerable, the tyrants should realise.”

He wrote in the tweet on Saturday evening, “The mighty British failed in their attempt to partition Bengal. Those who are conspiring to bifurcate Bengal again are living in a fool’s world. The people of Bengal will resist the BJP’s evil plot.”

The partition of 1905 was revoked in 1911 following prolonged protests

North Bengal is made of eight districts to the north of river Bhagirathi-Hooghly. It stretches up to the Himalayas. Bengal’s southwestern region, bordering Odisha and Jharkhand, is made of five districts. Together, these regions have 16 of the state’s 42 Lok Sabha seats and 109 of 294 assembly constituencies.

Notably, in the assembly elections, it is in north Bengal and the southwestern Bengal that the BJP got most of its seats from, while the party fared poorly in south Bengal and south-central Bengal.

Of the total 294 seats, elections were held in 292 and the BJP and its alliance partner All Jharkhand Students’ Union (AJSU) won 77 (two later resigned). Of these 77, as many as 53 came from these two regions – 30 out of 54 in north Bengal and 23 out of 56 in southwestern Bengal.

In south Bengal and south-central, of the 183 seats where elections were held, the BJP won only 24.

People use water from Bhutan at Bandapani tea garden in Alipurduar district. (Right) A cycle laden with 20-75 litre water containers winding their way to the nearest reliable water point, which is almost five km from the villages. Photo: Tanmoy Bhaduri

According to Rupam Deb, a tea garden workers’ rights activist in north Bengal, the BJP was playing the same game that it played over Gorkhaland for years – neither supporting is wholeheartedly nor opposing it.

“They are not making the party’s stand clear but keeping the issue alive to confuse people. I think they have become desperate to retain its strength in north Bengal ahead of the 2024 Lok Sabha elections. It is also evident that the ploy is not Bengal BJP’s but of the party’s national leadership. It is with this specific intension that they gave ministerial berth to two MPs from north Bengal both of who had supported the demand for a separate state of north Bengal,” Deb said.

He added that while this stand of the BJP was sure to trigger backlashes against the party in south and central Bengal, even in north Bengal a majority of the local people are unlikely to support it.

“Bengalis in north Bengal would fear turning into a minority in this new state. It is mostly the Rajbanshi community which would be supporting this demand,” he said.

Rajbanshis are the state’s largest Scheduled Caste group. They dominate the demography in the district of Cooch Behar – which was previously the centre of two separate statehood agitations, Greater Cooch Behar and Kamtapur – and make up a significant chunk of the population in Alipurduars and Jalpaiguri.

Cooch Behar MP Nishith Pramanik also got a ministerial berth along with Barla and is at present the deputy of home minister Amit Shah.

Manoj Bogati, editor of the Kalimpong-based, Nepali language digital news channel Kabar Magazine, said that the Nepali people who have so long supported the Gorkhaland demand would oppose the demand for a separate state of north Bengal.

“This new demand undermines the demand for Gorkhaland state. Even the BJP’s alliance partners in the Darjeeling hills are not in favour of a separate state of north Bengal. Recently, the BJP’s Kurseong MLA B.P. Bajgain tried to support the demand saying that the new north Bengal state would finally offer the ‘permanent political solution’ that the BJP had promised for Gorkhaland but he received a great deal of backlash,” Bogati said.

He, too, said that the BJP was trying to “play the same game” over north Bengal that they played over Gorkhaland. “They will neither come out in support cleanly nor will they let the issue die down. Their plan is to keep people confused and guessing, while keeping the hopes for a surprise alive,” he said.

While statehood agitations are not new to north Bengal, the Jangalmahal did not witness any major movement in this regard in the recent years, even though a kind of pro-Jharkhand sentiment had prevailed in areas bordering Jharkhand.

This is why at one point of time two factions of the Jharkhand Party and the Jharkhand Disom Party had become popular in parts of West Midnapore, Jhargram and Purulia districts. However, they have little influence left since the Trinamool Congress (TMC) came to power in 2011.

Even though the BJP performed spectacularly in this region in the 2019 Lok Sabha election, the TMC managed to recover a lot of ground in the assembly election.

The CPI(M), too, strongly criticised Ghosh’s remarks. Last month, the party’s state unit secretary Surjya Kanta Mishra told party cadres and supporters that they needed to prepare to foil the BJP and its ideological fountainhead, the Rashtriya Swayamsevak Sangh’s, plan to divide Bengal.

On Saturday, the party’s politburo member Mohammad Salim said, “This is yet another divisive plot of BJP and RSS. They divide people not only on the lines of caste and religion but on whatever issue that they find. Now, they want to mentally divide the people of north Bengal and south Bengal. We condemn it and will fight till the end to prevent such a vicious plot.”

He said that the issue of backwardness for both the regions was valid but the Centre could not deny its responsibilities for the same.

“What has the Centre done for tea, tourism and forest-based industries, the biggest income generation options for north Bengal at present? They have closed down the Teesta barrage project. They are talking about Jangalmahal here, but in Jharkhand they took way land from the tribal people. We will expose their divisive plot,” said Salim.

The BJP in 2019 won 18 Lok Sabha seats but, going by the assembly election trends, they are leading in only 10, and in some of them, with thin margins.