Singh's exit from the Congress after three-decades has been rumoured for a long time, however, the effect of his influence on his new party, the BJP's local leadership in UP's Kushinagar district and voters remains to be seen. 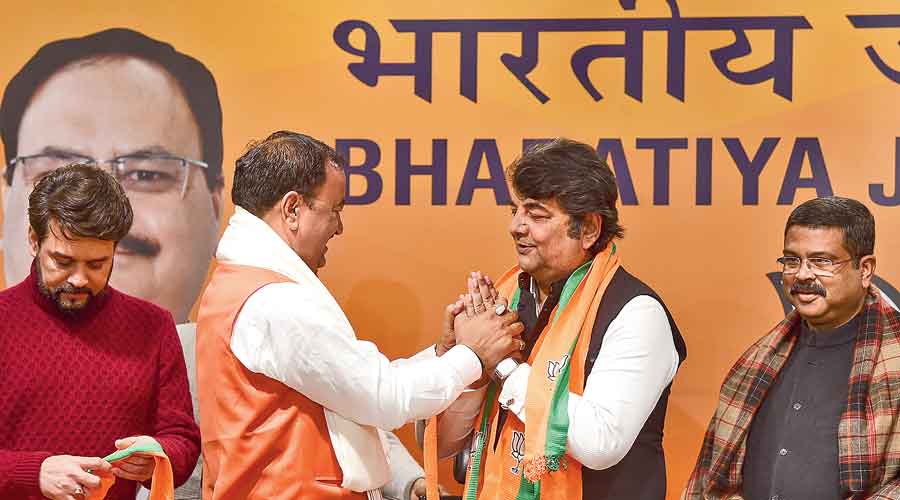 A few other defections are in the offing in the district ahead of the polls.

Singh’s departure from the Congress after three decades with the party – and that he would begin a new chapter with the BJP – had been rumoured for a long time. However, how this decision affects his career trajectory is still being speculated upon. Moreover, Singh’s wife, a journalist by profession, is expected to kick-start her own political journey with the upcoming assembly polls.

Throughout his 30 years with the Congress, Singh remained a compelling figure in the politics of the Kushinagar district. Singh hails from the Jagdishgarh Estate and inherited the political lineage of his father, Kunwar Chandra Pratap Narayan Singh, Congress MLA from Padrauna between 1969-74. In 1980, Kunwar Chandra was elected as the Lok Sabha MP from Padrauna and subsequently became the Minister of State for defence during Indira Gandhi’s rule.

Singh studied at the Doon School and later, at St. Stephen’s College in New Delhi. He wanted to pursue higher studies abroad but was forced to return to Padrauna due to the untimely death of his father, following which he, too, joined politics.

In 1996, Singh was elected as the MLA from Padrauna for the first time, winning the seat again in 2002 and 2007. During this period, he served as president of UP Youth Congress and as state vice-president of UP Congress.

Singh also contested the 2004 Lok Sabha elections from Padrauna, but was defeated by Baleshwar Yadav, who had rebelled against the SP and was contesting for the National Democratic Party. As an MP, Yadav represented Padrauna twice – in 1989 and 2004 – but is now back in the SP. His son, Vijender Pal Yadav, had contested the 2017 elections from Kushinagar’s Khadda assembly constituency but was unsuccessful.

Also read: R.P.N. Singh’s Congress Exit Is More of a Risk for Him Than it Is for the Party

Later, Singh was inducted into Manmohan Singh’s cabinet and was handed important portfolios. In the second Manmohan Singh-led UPA administration, he served first as the Minister of State for surface transport, then for petroleum, natural gas and corporate affairs and finally, for home affairs.

He stepped down from the Padrauna assembly seat after getting a parliamentary berth and fielded his mother, Mohini Devi, in the 2009 by-election. The BSP, gave its ticket once again to state president Maurya and went above and beyond to secure a win and despite Singh’s ferocious campaign, his mother lost the election. The defeat came as a severe blow to Singh, who had close ties with the Congress high-command. The latter, however, maintained its faith in him.

Following the win, Maurya strengthened his political presence in Kushinagar, winning the two subsequent elections – on a BSP ticket in 2012 and on a BJP ticket in 2017.  Thereafter, he was inducted as a cabinet minister in the Adityanath government in the state.

Singh’s political grip on Kushinagar was weakened after he lost the 2014 and 2019 Lok Sabha elections. In 2019, he was defeated by the BJP’s Vijay Dubey, whom Singh had earlier helped get an assembly berth for the Congress in 2012.

In 2017, despite Singh’s towering presence, the Congress managed to bag only one out of seven assembly seats in Kushinagar. Ajay Kumar Lallu managed to get re-elected from Tamkuhiraj, but his victory was owing to his own combative personality rather than Singh’s persona.

Even in the two previous assembly elections, Singh could not garner any notable support for the Congress. In 2007, he won from the Padrauna assembly seat, but the Congress lost the remaining six seats. In 2012, the Congress could bag only two out of seven.

Outside Kushinagar, Singh has not yet managed to make his presence felt. In fact, he made no efforts to that end, remaining confined to his parliamentary constituency and its two assembly constituencies – Padrauna and Khadda.

After joining the BJP, Singh has started identifying himself as a Sainthwar. Indulging in caste politics was something he had never done before.

Earlier, people had speculated on his caste; while some believed he was a Sainthwar, others thought he was a Kurmi; but Singh has always called himself a Kshatriya. Sainthwars, Kurmis and Patels belong to the OBC category but each has a different political demeanour. In the social milieu, Sainthwars usually try to distance themselves from Kurmis.

As a Union minister in the UPA government, Singh had executed two major projects in Kushinagar which cemented his image as a pro-development politician. He got the roads in the district repaired and set up a large number of cooking gas agencies, making gas easily accessible for locals. He also takes credit for the UPA government’s decision to revive the closed fertiliser factories, including the Gorakhpur fertiliser factory.

However, in a speech at a rally in Gorakhpur on October 31, 2021, Priyanka Gandhi had enumerated these development works and credited them to the Congress and herself.

Even during his tenure as a Congress leader, Singh never openly opposed Adityanath’s communal politics. Singh and Adityanath’s political career journeys largely during the same period. He was the Congress’s most prominent face in the region – and the party felicitated him too – but not once did Singh step forth to counter Adityanath and his Hindu Yuva Vahini’s growing dominance in his own district, let alone in Gorakhpur and adjoining areas.

Singh was also never vocal on public issues concerning Kushinagar. While he was still politically active, five out of 10 sugar mills in the district closed down and sugarcane cultivation suffered a huge blow in a region known for it. But Singh never once raised his voice.

Also read: If it’s ‘Aurangzeb vs Shivaji’ in UP, it’s ‘Ashoka vs Aurangzeb’ in Bihar

What’s more, there are about 100 musahar tolas in Singh’s district with a population of one lakh musahars living in abject poverty. Over the last two decades, the media has reported the deaths of over 100 members of the musahar community due to starvation and disease. Yet Singh never raised his voice; not when he was in power and not when he was part of the opposition.

Singh has maintained the image of a royal personage in the district even though he spends very little time there. When he does visit, most of his time is spent in his ‘palace’. For him, public appearances are quite rare but his supporters call it a strength rather than a flaw, claiming that, “Raja Saheb is above petty politics and is concerned with big issues.”

Lallu, on the other hand, fought his way up the political hierarchy and carved a niche for himself, not only within the Congress but in the district and the state in general. Before joining the Congress, Lallu had established himself as a student and youth leader, fighting for the issues of the poor and the region’s youth, besides raising other regional issues. As an MLA, instead of becoming complacent, he intensified his struggle, even going to jail on several occasions. 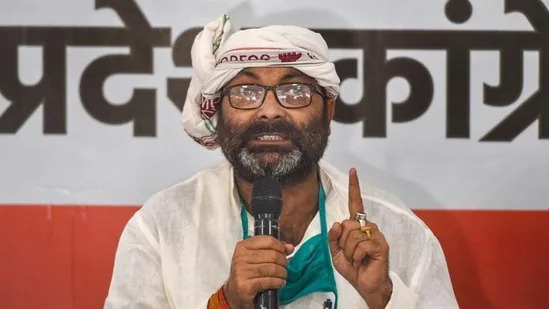 Lallu was imprisoned for holding an agitation in Kushinagar against police harassment and sand-mining in the Narayani river, but Singh neither backed his movement nor opposed his arrest.

Singh also did not make any apparent efforts to galvanise the Congress organisation in Kushinagar. His ‘palace’ continued to house the Congress office in the district, which showed signs of activity only when Singh was present.

Lallu’s growing stature and clout in the Congress pestered Singh, who had been greatly offended when Lallu joined the party ahead of the 2012 assembly elections without his knowledge and consent. After joining the party in Lucknow, Lallu went to pay Singh a visit, but the latter did not bother to see him. Though Singh never openly opposed Lallu’s candidature from Tamkuhiraj in 2012, he did not use his influence to help him win. Lallu’s victory was a result of his own efforts and design.

The rift between Lallu and Singh continued to grow after the polls. The former was deliberately kept away from major public events and rallies of the party’s big-wigs. During Rahul Gandhi’s ‘Khat Sabha’ at Kushinagar in September, 2016, Lallu got the chance to speak only after Gandhi intervened. Even then, Singh, who was conducting the program, repeatedly interrupted Lallu with calls to “make it brief”.

Also read: UP Assembly’s Tenure Has Been Calculated Incorrectly Since 2012, Says Lawyer

It is rumoured that Singh has asked the BJP for three seats specifically out of the seven in the district: Padrauna, Khadda and Hata.

The BJP had won Padrauna, Khadda and Hata in the previous election. While giving the ticket to Singh’s candidate in Padrauna will not be a problem for the BJP, in the other two constituencies, local party leaders are likely to revolt if Singh’s choice prevails.

In the Kushinagar district, only Brahmin leaders have ever represented the BJP. Currently, Khadda has a Brahmin MLA while the MP of Kushinagar is also Brahmin. If the BJP is pressured by Singh to take other candidates on board to represent these constituencies, it may lead to infighting in the party. BJP leaders are already upset with the Tamkuhiraj candidacy going to the Nishad Party. Many local leaders in the BJP view Singh as a threat to their political careers.

The changing political equations have made the contest on all seven assembly seats of Kushinagar quite interesting. The Congress is on the lookout for fresh faces who can cause a dent in the BJP’s vote bank and, especially, take on Singh. With Singh on board, the BJP hopes to slash Maurya’s vote share while the SP is trying to strike a balance between Maurya and the party’s influential leaders, including former MP Yadav, former minister Brahmashankar Tripathi, and Radhey Shyam Singh.