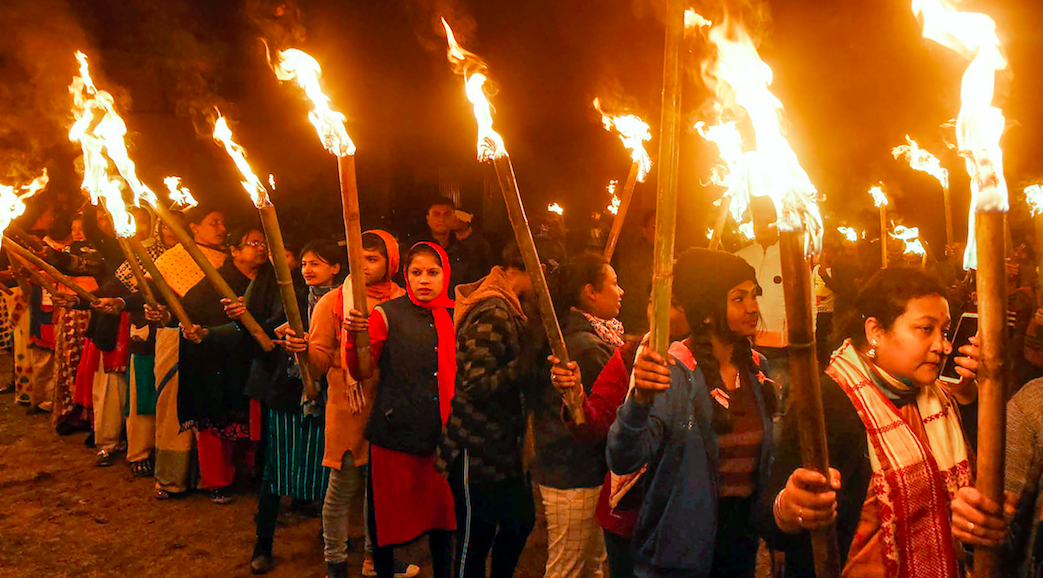 Activists of AASU take part in a rally against the CAA at Puranigudam in Nagaon, January 3, 2020. Photo:PTI

Guwahati: Filmfare Awards, Bollywood’s iconic black lady statuette, for the first time in its sixty-fifth year of its existence, will make its journey to Assam. Far from Maximum City Mumbai, she will be in Guwahati on February 15 with her usual entourage of matinee idols and the razzle-dazzle that defines her show.

But she hasn’t generated much fanfare, especially with the All Assam Students’ Union (AASU). One of its leaders has demanded a white paper on why the event is being organised in Assam with the state’s exchequer involved and the state being severely flood-prone.

That Assam will host the Awards was made official on November 24, when the Assam Tourism Development Corporation (ATDC) and World-Wide Media, a part of The Times Group, inked a deal with a Memorandum of Understanding (MOU). Vineet Jain, managing director of Bennet, Coleman and Company Limited and chief minister Sarbananda Sonowal attended the signing event in Guwahati.

The Wire spoke to Lurinjyoti Gogoi, the general secretary of AASU, in the midst of an ongoing anti-Citizenship Amendment Act (CAA) protest blitzkrieg, questioned the rationale behind the awards ceremony. He asked how Assam would benefit from the event, considering it is being organised by a private company, and when many local and indigenous artistes are suffering on account of financial constraints.

The feisty youth leader is at the forefront of anti-CAA protests against the Bharatiya Janata Party (BJP) led-state and Central governments and has been organising daily campaigns to keep the momentum going. Gogoi said the timing of the awards is questionable when the state is going through a political crisis and when “Assamese identity is at stake”.

“When Assam’s renaissance man Jyoti Prasad Agarwal made the first Assamese film titled Joymoti in the 1930s, it created a new front for Assam’s cultural identity. And what the BJP has done now? It has tied up with a private enterprise to bring in Bollywood stars to ‘boost’ Assam’s tourism,” he said. “I would like to ask how Assam could benefit from this? What is the objective of organising the Filmfare Awards? Will Assam’s culture and heritage be given a big boost? No. Crores of rupees earnt by hard-working people of the state will be spent on these stars and for their comfort. I demand a white paper from the state government. Why is the event being organised and what are the actual objectives? I would like to know what our indigenous artistes and Assamese film actors and actresses will gain from this,” said Gogoi.

The AASU leader also expressed doubts at the state government’s hope that the Awards will give a positive push to Assam’s tourism when Bollywood biggies visit them. “It is not certain that Bollywood celebrities will travel to iconic places in Assam. I think they will only come for the awards, not to travel. So, demanding a white paper on the Filmfare Awards will show us the true picture,” Gogoi said. “Many artists from the state are living without state pension and the state is prone to floods during monsoons. In this scenario, why is the government allotting Rs 31 crore for the Filmfare?” the AASU general secretary asked.

The Wire reached out to other AASU leaders on the issue, but could not reach them.

On January 28, a group of Assamese film artistes, singers, intellectuals and film associates held a press conference in Guwahati, announcing that they will ‘boycott’ the 65th Filmfare Awards. They said “the time was not conducive for such an event with the ongoing anti-CAA protests and also local artistes will have no role as all the crews that would accompany the stars who will perform will be from outside”.

Acclaimed Assamese filmmaker Jahnu Barua, a national award-winning director even raised his angst about the ceremony being held in Assam at the expense of the state’s exchequer. In a televised interactive show on popular Assamese television news channel Pratidin Time, Barua called the Filmfare Awards as ‘opo-Sanskriti (anti-culture)’. But he was quick to clarify the statement, saying the awards were ‘anti-culture because it involved the role of the state government’. “The money could have spent instead on a Bhupen Hazarika fellowship. The money could have generated bank interest. If any government would have done that, I would have worshipped that government,” he said.

On the show he had said, “Filmfare is a private magazine and the award show is held every year. They have the right to do it. A people’s government getting associated with Filmfare is the issue. There is no link between it and the local film industry. The time is not conducive.”

In July 2019, the BJP-led state government approved a new state film policy. The state-approved a Rs 25 lakh subsidy for films whose production cost is Rs 1 crore. It also announced that a reward of Rs 1 crore for those films which receive national awards and Rs 2 crore for films which get nominated to the Academy Awards (Oscars). The new film policy also facilitated a corpus fund, diverting Re 1 from every movie ticket sold for the benefit and welfare of artistes.

Popular Assamese film and theatre actor Zerifa Wahid told The Wire that the state’s policy cannot be considered a fully-fledged one. “Service charges have been reduced, which is good. But more is to be done. We need more screens and better infrastructure for our film industry. Concrete steps should be taken to help create films in indigenous languages. It is not ethical for the state government to work as a corporate office,” she said.

Wahid also agreed that this is no time to hold an awards show. “When five people died during anti-CAA protests, the time is not conducive to organise a Filmfare event. It doesn’t make any sense,” she said, adding that the budget allocated for the awards may increase further.

Jayanta Malla Baruah, the chairman of the All Assam Tourism Development Corporation, rejected criticism of the decision to host the Filmfare Awards. “It is unfortunate that CAA is being associated with the event. It is a trend to oppose everything the government is doing. It is unfair to call Filmfare ‘opo-Sanskriti’,” he said.