By Pushing Talk That Adityanath May Be Next PM, BJP Wants to Ensure We Don't Let Go of Modi

The choice of a saffron-clad Adityanath with rough edges particularly puts the opinion-making elite to tremendous discomfort. This discomfort would push them to either greater embrace of Modi or just hold on to him for longer. 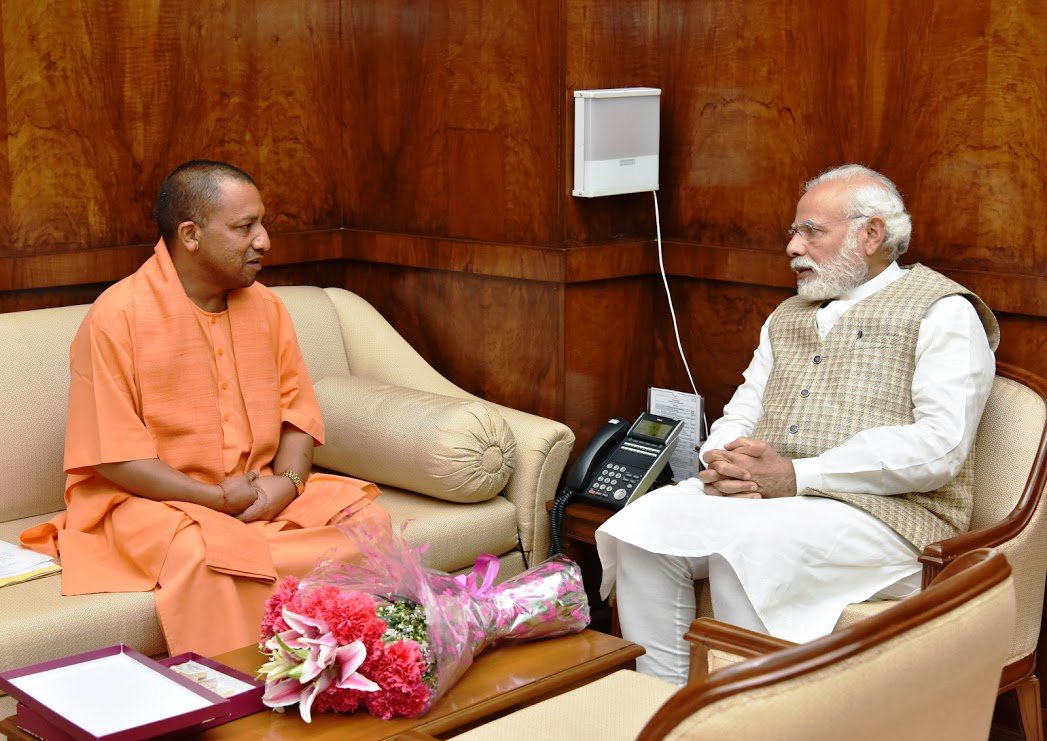 In the run up to the Uttar Pradesh assembly polls, home minister Amit Shah was asked a rather bold question in a media interview. He had answered it with an unperturbed exclamation. When asked about Adityanath being described by people as the Bharatiya Janata Party’s (BJP) prime ministerial candidate of the future, he had said: “Naturally, so much good work has been done under him [in UP], after so many years.”

Shah’s answer, if not rehearsed, appeared mulled over and carefully constructed in his mind. It was a delicate question because Shah has always been projected as the number two in the BJP after Prime Minister Narendra Modi. Shah has also been credited with stupendous electoral management and victory of the party across the country, and specifically in Uttar Pradesh. It was he who had mostly crafted BJP’s victory in the all-important state with 80 parliamentary seats in 2014 when Modi came to power, and in 2017, when Adityanath was installed as chief minister, and again in 2019, when Modi returned to power at the Centre.

Against this backdrop, the ease of Shah’s answer was puzzling because he was practically eliminating himself from the prime ministerial race. This should lead us to deliberate if his answer was a strategic one, or if it was a sincere admission that Adityanath had overtaken him in the race. In the aftermath of the victory on March 10, Adityanath was also being referred to in sections of the media as the ‘second biggest mass leader’ after Modi in the BJP. By extension, that would make him the second most important leader in the country after Modi. Whether such a description is accurate is a separate question, but we’ll have to first assess if Shah has conceded the space between him and Modi to the monk from Gorakhpur.

It is surprising that the ‘who after Modi’ question has been allowed to float around so early, especially when Modi is still in supreme command of his party, and there is no hint, whatsoever, of a threat to his prime ministerial chair. Usually people in the top chair, especially the ones like Modi with a bulwark of a parliamentary majority, and who perceive themselves as divinely ordained, do not entertain such questions. They not only think it distracts people’s focus but also disturbs the mythology of their perpetuity. When such is the case, this question, if Adityanath is Modi’s replacement, can only be a strategic utterance rather than real.

Also read: Modi and His Brand of Hindutva Are Direct Descendants of the British Raj and Its Policies

In the mid-1950s and 1960s, there was a similar question about the future of the nation after Nehru. Among a generation that had not known any other leader who had the halo of the freedom movement, there was a constant debate that got expressed in a pithy question – ‘after Nehru who?’ That was a question that was asked with some anxiety and was real to an extent.

Perhaps Modi, who is conscious of Nehru’s overarching legacy, is keen that a similar question is asked about him – ‘after Modi who?’ It is perhaps intended to create angst, longing and a sense of emptiness in the electorate. The emotions get accentuated if the projected alternative is an Adityanath and not an Amit Shah or a Rajnath Singh or a Nitin Gadkari. The choice of a saffron-clad Adityanath with rough edges particularly puts the opinion-making elite to tremendous discomfort. This discomfort would push them to either greater embrace of Modi or just hold on to him for longer. This whole question of succession and projection of Adityanath could be a psychological ploy that immeasurably accrues dividends for nobody else but Modi.

Besides the psychological game, invoking Adityanath’s name and offering it some legitimacy, like Shah did in the interview, has ideological uses. A certain ideological air cover for the rest of India is created if a saffron-clad man is in charge of the biggest state, which has Kashi, Ayodhya, Mathura, Prayagraj, and Vrindavan. These are all holy spots in the minds of believers among Hindus and have been deftly reconstructed in their minds for purposes of political religion or Hindutva. 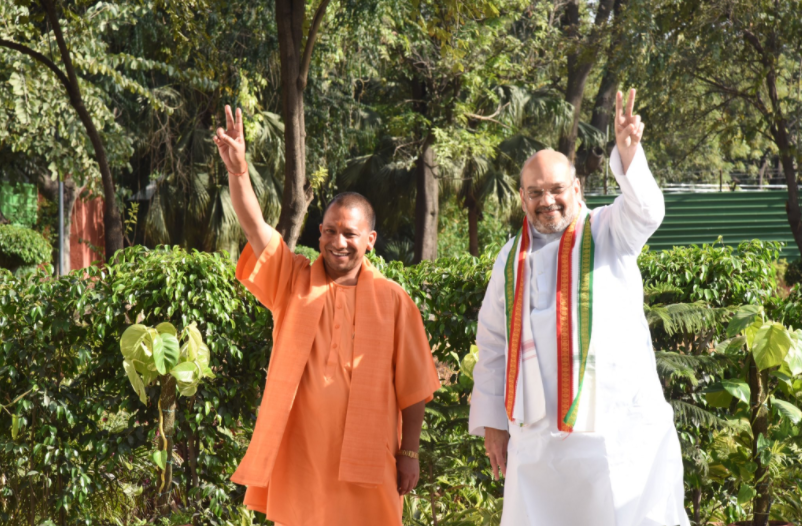 To remodel the largest state in India as the spiritual headquarters of the faith, and not merely as a political pivot, has an entirely different effect. From this flows the political logic that the state should be secured under not just a believer but under a preacher. This makes Adityanath a fine symbol of Hindu assertion rather than a political successor to Modi. In Uttar Pradesh, it is Modi who is seen as the one who cleared the path for the temple in Ayodhya. He is projected as the benefactor and Adityanath as his chosen point-person to guard the faith.

The parallels that exist between Modi and Adityanath (Hindutva masculinity) makes it very tempting to say that Modi will pick someone of his likeness to succeed him (at this stage the veto of succession is with Modi, not the RSS), but Modi is also conscious of what he leaves behind. He is keen to craft how he wants to be remembered. Adityanath may be a man in saffron, but Modi has often described himself as a ‘fakir’ and has greatly enjoyed his saintly assignments in flowing robes between and during elections. Can anyone forget his meditation fully wrapped in saffron in the Kedarnath cave before the 2019 general election results? While Adityanath is a priest and a preacher, Modi has been carefully presented to the electorate as someone who is part of the divine or at least its hologram (an ‘avatar’ as some have spoken in predictable extremes). There are many saffron-clad parliamentarians in the BJP with roughly the same degree of ideological brazenness as Adityanath, but there is, so far, only one Modi for the saffron forces.

To project Adityanath is a safer bet for the current ruling establishment (Modi and Shah) because they read the nation well – a splintered cocoon of the medieval and the modern. Modi, when he became prime minister was both ancient and modern. He appealed to both the faith and technology compartments of the splintered Indian mind. Adityanath will be seen as an extreme. He will impose too much guilt on the consumption patterns of the nation, and therefore, he may not be after all acceptable to a diverse constituency, even among Hindus. Amit Shah, who is arguably the shrewdest political mind, intuitively realises this or else his interview answer would not have had such felicity.

Also read: Debate: Thanks to the Hijab Issue, India Is Falling Once More Into the Communal Trap

Even the current Uttar Pradesh election victory is projected as having more than a fair share of Modi’s welfare schemes and personality. When there were questions being raised about the return of Adityanath and when defections were hitting the headlines every day and when Mandal threatened ‘kamandal’, it was Modi who put his hand patronisingly around Adityanath and ensured his safe passage to his second term. In the protocol of behaviour with a saffron-clad priest like Adityanath, none could have put an arm around him, however elder, but Modi did. That makes Adityanath beholden to Modi and not his challenger or his most certain successor.

It is important for Modi and Shah that Adityanath delivers Uttar Pradesh in 2024 because now for Modi it may be a game of percentages. He perhaps wants to outdo the vote percentages that Nehru or an Indira Gandhi or a Rajiv Gandhi garnered in general elections. Bigger than the 37.36% he got in 2019. The game may be to cross the 50% mark, which may give the party legitimacy to look at certain basic structures on which this nation stands.

The game is still about Modi and the chatter of Adityanath as a future prime minister does a lot of signaling at this stage, and therefore, is less real. It is hard to imagine that Modi is working to establish a theocratic state under Adityanath. However, dangling a Khomeini-like threat has enormous political uses.

Sugata Srinivasaraju is a senior journalist, author and columnist.