BSP to Contest Assembly By-polls in UP Alone – Is the Alliance With SP Over?

At a stock-taking meeting in New Delhi on Monday, BSP chief Mayawati reportedly decided that her party will be contesting the upcoming by-polls in 11 assembly seats of Uttar Pradesh alone. New Delhi: The electoral alliance between the Samajwadi Party and Bahujan Samaj Party appears to be have come to an end.

At a stock-taking meeting with the campaign coordinators in New Delhi on Monday, BSP chief Mayawati reportedly decided that her party will be contesting the upcoming by-polls in 11 assembly seats of Uttar Pradesh alone.

Although the BSP has not declared the end of the alliance formally, Mayawati’s decision to contest by polls indicate the same as her party has conventionally stayed away from contesting by-polls.

The coming together of the two arch-rivals was seen as a game changer in Uttar Pradesh. Even so, the BJP decisively trumped the alliance by winning 63 out of the 80 seats. The saffron party changed the political equation by increasing its vote share from around 43% in 2014 to around 50% in 2019.

In contrast, the mahagathbandhan, which was expected to gain from the alliance of the two rivals secured only around 39%.

The BSP could win only 10 – a big gain from the 2014 elections in which it had failed to even open its account – while the SP secured only five victories, including those of party chief Akhilesh Yadav and his father Mulayam Singh Yadav. 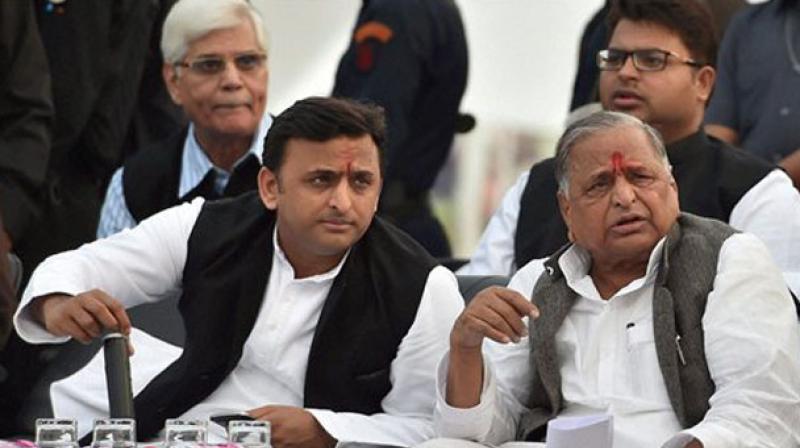 Last year, the Ambedkarite party had decided to support Samajwadi Party candidates in the parliamentary by-polls of Gorakhpur, Phulpur, and Kairana. The victory of all three candidates against the BJP led to the eventual pre-poll alliance between the two parties for the 2019 general elections.

Popularly known as ‘mahagathbandhan, the alliance was seen as voicing the concerns of a large section of  OBCs, Dalits and Muslims. However, the decisive results in favour of the saffron party have foregrounded the historical differences between the two parties again.

According to sources in the BSP, Mayawati took the decision to contest the by-polls alone after campaign coordinators pointed out that although the BSP cadre, comprising a large section of Dalits, were transferred wholeheartedly to SP candidates, the reverse did not happen.

“Yadav votes (SP’s constituency) were not transferred to the BSP in many seats. This means that the SP could not consolidate its own base. The alliance with SP turned out to be useless for the BSP,” Mohammad Faisal, a former journalist who has covered UP extensively, told The Wire.

This, BSP’s campaign co-ordinators reportedly said, was the principal reason behind the defeat of many BSP and SP candidates.

“Even Akhilesh’s family members could not win the support of all Yadavs. His wife Dimple Yadav, cousins Dharmendra Yadav and Akshay Yadav also lost. In all these seats, Shivpal Yadav’s party polled a substantial number of votes. Only the Yadavs could have voted for Shivpal.”

According to what the BSP party workers said in the meeting, Dimple, Dharmendra, and Akshay Yadav, who contested from Kannauj, Badaun, and Firozabad respectively, trailed in assembly segments that were Yadav-majority seats and were considered SP strongholds.

Mulayam Singh, who won the Mainpuri Lok Sabha seat, trailed by a huge margin in the Bhongaon assembly seat – considered to be Mulayam’s pocket borough. The same was the case in many assembly segments which were Yadav-dominated areas.

Mayawati felt that the candidates floated by Shivpal Yadav, Akhilesh uncle who rebelled last year, and the Congress, damaged the mahagathbandhan’s chances further. She is also believed to have said that the SP could win its five seats only because of the support of Dalits and Muslims.

The 1995 UP guest house incident, in which Mayawati was assaulted by SP workers, was also a topic of discussion at the Monday meeting. According to a BSP worker, Mayawati said that although she would never forgive the SP for the incident, she had put the bitterness behind because of the Akhilesh, who she praised for getting the two parties together.

Despite this, she felt that the alliance with SP did not bring in enough advantage for the party, which is why it was decided that BSP would go it alone in the by-polls.

Also read: If Congress Fights All 80 Seats, Can the SP-BSP Alliance Take on Modi in UP?

However, sources in the SP said that the logic that the the party couldn’t consolidate Yadavs along expected lines is misleading. “Most Yadavs voted for the gathbandhan. Shivpal Yadav’s party had negligible vote share (less than 1%),” a SP leader said.

The leader contended that the alliance could not get the support of communities other than Yadavs, Jatavs, and Muslims while the BJP consolidated a number of smaller communities under the saffron umbrella.

Rajan Pandey, a close observer of UP politics, told The Wire: “The reasoning BSP is using to break the alliance can also be used against it. The SP can now say that the split in Dalit votes led to the defeat of many gathbandhan candidates. That BSP did not receive much support from Dalit groups apart from the Jatavs has already been established in many post-poll analyses.”