The Owaisi Brothers Make Inroads in Maharashtra, Talking of Justice and Development

Instead of relying on emotive religious issues, the AIMIM's leaders use statistics and facts to drive home their point. 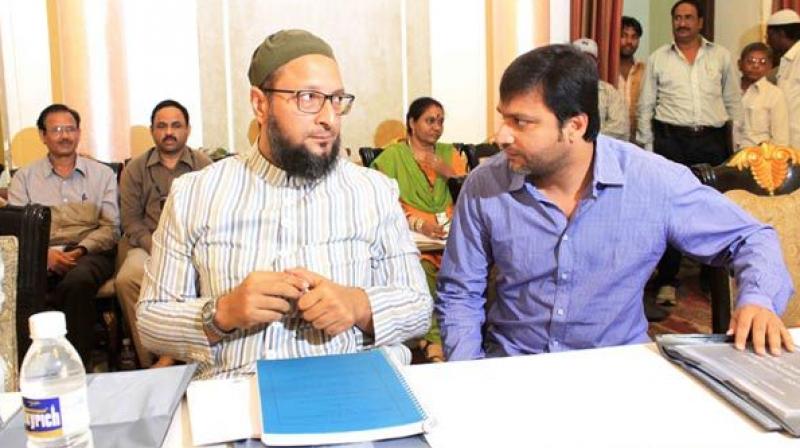 Permission for a public meeting to be addressed by Akbaruddin Owaisi in Pune city on February 1 was finally granted by the police after rejecting the application five times. In order to get the approval, AIMIM office-bearers from Pune had to submit videos from the younger Owaisi’s recent public meetings, so that the police could be satisfied that they were free of any inflammatory content. When the meeting was finally held, it was to highlight the electoral front which has been formed for the Maharashtra municipal elections being held on February 21 – of All India Majlis Ittehadul Muslimeen, Bahujan Socialist Party and Republican Socialist Party of India, whose leaders Dr. Suresh Mane and Rahul Dhambane respectively, were also present to share the dais with Akbaruddin Owaisi.

The huge police presence at the venue, and the denial of parking of vehicles to anyone, both, at the ground or on the main road in front of it, was ostensibly to allow for the security arrangements around Owaisi, but they also served to underline the official skepticism and wariness about AIMIM in the Maharashtra administration, even as the party continues to make electoral forays at the local level. It is a wariness that is evident in large measure also among secular-liberals in the media who often equate the AIMIM’s appeal to their followers with the identity politics practiced by the BJP and Sangh Parivar. However, an examination of the communication strategy of the Owaisi brothers in recent meetings indicates the dangers of applying a framework to their growth that is no longer of value in the rapidly changing contours of Indian politics.

The public meeting in Pune was preceded by another in Govandi in Mumbai, also addressed by Akbaruddin Owaisi. Speaking about the malnutrition figures from the M East ward of Govandi, one of the more lower middle class areas of the city, Owaisi read out official statistics on how its residents compare with the rest of Mumbai on parameters like enrolment in schools, consumption of edibles like green leafy vegetables and fruits, and underage marriage. Needless to say, these were shocking in the contrast they provided, and he underscored the irony when he spoke about the area being in proximity to Deonar, from where meat was supplied to the whole of Mumbai, but where those employed in the meat industry struggled to provide two nutritious meals a day to their families. “I will send a copy of this report to your local councilor and MLA,” he said at the Govandi meeting, brandishing the papers before a crowd well aware of the figures that reflect their daily reality.

He carried a similar sheaf of papers to the meeting in Pune. In his long address, he began by saying that he had not come to speak against any religion or hurt anyone’s sentiment but only to express his own hurt. “Gopal Singh, Sachar, Kundu, Srikrishna…” intoned Owaisi, naming some well-known committees formed after Independence, “take all the reports and investigations and what do you find? That the largest minority is also the most backward. Why does it remain the most deprived on all the important parameters? Can any nation aspire to be a superpower, or number 1, by ignoring its own people?”

A part of Akbaruddin Owaisi’s speech is well rehearsed and well known. He talks of the support every prime minister of independent India has received from the Muslims, and how, instead of this increasing their security or prosperity, has given them the dark and terrible dividend of over 50,000 instances of loot, arson, murder and rape against members of the community. He urges his audience to be unafraid and remember that this has been their country, is still their country, and will remain their country till the day of Qayamat inspite of the worst efforts of divisive forces. When he then shifts gears and asks, “Then whither this ‘pasmandagi’ (backwardness)?” the audience is ready to receive the more substantial part of his discourse.

“In Maharashtra, only 3% of Muslims are becoming graduates, and the figures are even lower for girls – only 1.4% of Muslim girls graduate. There are large numbers of dropouts. While Muslims form 12% of the population of Maharashtra, they make up 36% of the prisoners in the jails of the state. From 333 reported custodial deaths, 224 are Muslim and Dalit…is it our destiny to be in jail, to live in filth?” As he reports each of these, he asks the question – kya yehi insaaf hai (is this justice)? It is a question that is likely to echo in the mind of anyone who has heard the speech. When such a person also knows first-hand the discrimination, civic neglect, and lack of inclusion the figures represent, the impact of Owaisi’s words cannot be underestimated.

In November 2016, before the local body elections in Maharashtra, his elder brother had campaigned in Karad, among other places, and taken on the Congress in its bastion. The assembled crowd of a few thousands packed in the market square and perched on rooftops had roared every time Asaduddin Owaisi held the Congress accountable for failing to provide any development or protecting the interests of Muslims or Dalits after milking the ‘secular’ vote bank. He seemed then to take exception to another election meeting addressed a couple of days earlier by Prithviraj Chavan, former Chief Minister of Maharashtra, who is affectionately referred to as ‘Baba’ by the locals. Chavan had apparently referred to the AIMIM as being the ‘B’ team of the BJP. This is an oft-repeated charge by many political opponents of the AIMIM. In reply, Owaisi likened the BJP and Congress to be each other’s A and B teams, with their policies and approach merely differentiated to the extent that “one stabs you from the front, another sweet talks you and knifes you from behind.”

Owaisi pointed out the many instances of Muslim youths being imprisoned for years, as in the Malegaon and German Bakery cases, then being let off by the courts after their lives had been devastated. “Did the Congress lift a finger for any of these men?” he asked, and the crowd roared ‘No!’ in reply.

If ‘Baba’ had been the target for Asaduddin Owaisi in November, it was ‘Dada’ for Akbaruddin in February. ‘Dada’ is how Ajit Pawar is referred to in Pimpri-Chinchwad near Pune, with the NCP having led the local civic body for many years. Both brothers squarely held the failure of so-called secular parties like the Congress and NCP in working for development to be the main reason why the BJP has come to power at the centre. As the epithet ‘Dada’ found great traction with the crowd, Akbaruddin Owaisi moved into the final fifteen minutes of his speech, which, as he had already indicated, would be on his favourite topic, Narendra Modi. From asking the PM to start acting like a ‘Vazir-e-Azam’ instead of resorting to cheap political stunts, from asking whether Pakistan had stopped incursions after the ‘surgical strikes’, Owaisi declared that there is no need for the PM to have a 56 inch chest, just a 4 inch heart, that he lacks.

On January 2, the Supreme Court passed a verdict prohibiting anyone from asking for votes in the name of religion, caste, community etc. Watching the AIMIM leaders communicate to their followers in the Maharashtra local body and municipal elections, it is difficult to tag them as communal or inflammatory. In fact, the Owaisis are proving to be smarter political communicators than most.

For a party that made news for refusing to chant ‘Bharat Mata ki Jai’, AIMIM leaders never forget to say ‘Jai Bhim’ at the end of their address. Their social engineering has been ahead of most, and unlike the BJP, which has not been able to find a single Muslim candidate to fight elections for it in the 403 seat UP assembly, AIMIM fields Hindu, Dalit and women candidates in Hyderabad as well as Maharashtra. In Karad, their candidate was Rupali Anantarao Lade of Bhimshakti.

By these yardsticks, the speeches of the Owaisi brothers in Maharashtra seem worth taking far more seriously than the protestations of Amit Shah merely because they are always supported by empirical data, they always ask for solutions within the Indian constitution and legal framework, and they speak of matters like inclusion and non-discrimination, fair governance and equitable development, instead of ‘garv’ and ‘asmita’ (pride and honour), imagined slights and their redressal. What is more real? The visible filth and distress of Govandi’s slums, or the imagined exodus of Kairana? The large numbers of Muslim youths in jails or the arsonists and looters being granted bail for ‘lack of evidence’? For any Indian today concerned with justice and inclusion, with development for all, AIMIM’s political communication contains some valuable insights.