Infrastructural expansions would presumably generate employment, but this would also facilitate migration, which could hit the fragile peace in the region. 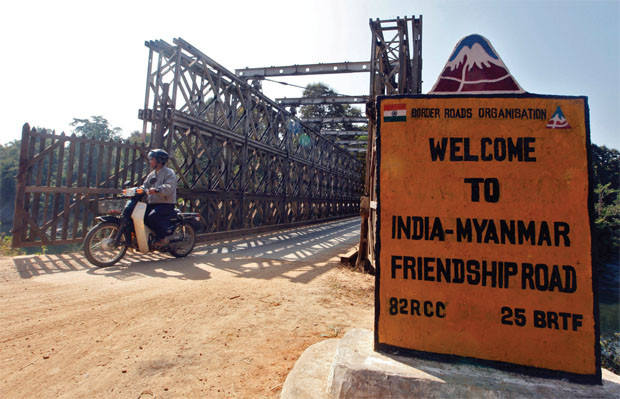 The policy was aimed at finishing the insurgency problem in the Northeast by way of opening up the region to Southeast Asia. Credit: Reuters

Following up on India’s Look East policy introduced in the early 1990s, the Modi government announced the Act East policy soon after coming to power, almost simultaneously with the US declaration of its pivot to Asia.

The Look East policy evolved into a tool for greater economic engagement with our eastern neighbours, and forging strategic partnerships and security cooperation with the countries of Southeast Asia and Far East – such as Vietnam and Japan. Taking this idea forward, the Modi government decided to focus more on improving its relation with ASEAN and the East Asian countries. It was also aimed at eliminating the insurgency problem in the Northeast once and for all by way of opening up the region to Southeast Asia. In this way, the sea and land promised to become interlocked elements in India’s eastward thrust. In short, the Look East and Act East policies have had military, political and economic components.

Abiding by India’s Look East agenda, the country’s Northeast became a frontier for the eastward thrust, both in terms of political imagination and logistical implications. Given its location, the Northeast assumes the role of bridging the space between mainland India and other Southeast Asian nations. As a result, there has been an emphasis on developing the infrastructure of the region by widening the roads, expanding air connectivity, extending railway networks, opening new and reactivating dormant trade routes, as well as facilitating border trade and transit points. Such activities have serious implications on the use and extraction of resources from the region, and also leads to occasional changes in the composition of the labour market and mobility.

The fate of the Northeast appears inextricably tied to the Look East policy, especially in the coming days. Increased trade and connectivity will rapidly transform the region by rescuing it from the clutches of insurgency and sub-nationalism, and place it in the broader network of power, capital and markets. This stream of activities would supposedly make the multiple fault lines of the region disappear. However, prior to raising our expectations about the often termed ‘troubled periphery’, let’s first understand the complications and impediments of governance in Northeast India.

What Look East means for the Northeast

If we were to bring in the communitarian reading of the Look East policy, where community claims are prior to those of the market, the gaping frictions of the Look East policy in Northeast India would be revealed. Improved bilateral ties and connectivity are definitely the high octaves of melody for the policy practitioners sitting in New Delhi. However, unless the terms of the policies are reconciled by the communities in the Northeast, the agendas stare at a cul-de-sac, which has been the exact case with the Look East policy that has till now been tentative rather than rooted in long-term strategy.

While better access to the market is linearly equated to peace, prosperity and development, some sections of the society are apprehensive about further connectivity and labour mobility, which has been expressed through agitations against railway expansions in Meghalaya and Arunachal Pradesh.

The anxiety has also been expressed in popular culture and medium. For example, 23rd Century, a Manipuri film that envisages the future of Manipur as one being dictated by non-Manipuris due to a massive influx from outside Manipur. Such expressions add to the ongoing demands for the Inner Line Permit (ILP), creating a temporal alliance between the hill and valley communities in Manipur who are otherwise at loggerheads on issues like citizenships and land rights.

The ILP was introduced by the British to demarcate some areas inhabited by communities rendered as ‘savage uncontrollable communities.’ More importantly, the ILP was supposed to enact a split between capital and pre-capital. Now, despite the fact that in the post-colonial liberalised regime the ‘split’ has been cemented to a large extent, the demand of maintaining ‘otherness’ through the ILP resonates among multiple erstwhile ‘savage’ communities.

Probing such politics deeper doesn’t outrightly reject the authority of the Indian state or the capital flow associated with it, but is rather aimed against the mobile labour communities deemed as a threat to the indigenous communities and local hierarchy reproduced in multiple levels.

The story of resource extraction in Northeast India is not simply a unilateral tirade against it. In the literatures documenting the resistance of the communities against resource extraction, there are also voices of support from government officials, elected representatives, tribal elites and at times, sections of the insurgent groups. Most importantly, the collective opinion of a community finds themselves questioned when class differences emerge over time.

A member of the Angami Naga community said “It’s foolish to sit on resources and not utilise it.” Dolly Kikon has shown how ‘extractive economy’ in Nagaland has fuelled the dream of prosperity among the powerful section of the state. The linearity of arguments thereby gets challenged. The point is that while once upon a time, perhaps prior to the British rule over today’s Northeast India, it was possible to associate a whole community with a particular opinion, ideology or lifestyle, by no means can it be repeated today. That leaves us with the complex task of deconstructing the matrix of class and ethnicity on Northeast India.

When ‘class’ appears in the analysis, the leftist politics in the region becomes a crucial guide to some new insights. While Tripura has been a communist bastion in the region, personalities like Hijam Irabot Singh of Manipur and Gauri Shankar Bhattacharya of Assam have adorned the leftist politics in the region. The recent debate in India over the minimum wage rate mainly pursued by leftist organisations can also have major ramifications in the region as wage rate is and has been a major divider between indigenous and migrant communities. If pursued with purpose, the issue of wage rate would provoke a new regime of politics in the region that will compliment leftist considerations. However, it is too early to state that class politics has replaced or surpassed ethnic determinism. We are still witnesses to homeland demands and intermittent violent acts of ethnic cleansing. Let’s just say that there is a coexistence of both class and ethnic consciousness and the nature of the divide or fault line depends on the issue at stake, which in turn orients the politics and realpolitik in the region.

The participation of the northeastern state governments or institutions in the Look East policy is nearly non-existent. Surprisingly, in the policy documents, there is barely any mention of the tourism sector, which has a huge potential in the picturesque Northeast. The psychological disconnect of the policymakers with the region also comes up when the village of Mawlynnong in Meghalaya, Asia’s cleanest village, is conspicuously absent from the much promoted Swachh Bharat Abhiyan.

Seemingly, the imposition of sovereignty on many parts of Northeast India post-1947 is now followed by the imposition of India’s policy agenda in the post-liberalisation era. There is no doubt that increased connectivity will increase volumes of trade, as it was in the pre-partition era, however, what’s troubling is that in both post-1947 and post liberalisation era, the consent of and consultation with the northeastern societies have been bypassed.

Will the elements of Look East policy make the fault lines of the region vanish? What difference will it make for the marginalised communities in the periphery that have been neglected so far? Will the precariousness of existence of the Bengali Muslims, Hindu Bengali ‘doubtful’ voters, Chakma refugees in Arunachal Pradesh or the Reang refugees in Tripura see any noticeable change? Who stands to benefit from Look East policy, or rather which class across ethnicities will reap the dividends? What happens when impoverished sections of the society come in close proximity to accumulated capital? How does the gender imbalance in the region reacts to the in-migration of overtly male labours?

These questions collectively point to the issues of rights and justice, which have been repeatedly abused in the Northeast, not only by the Indian state but also by one ethnic groups using it to target another.

Perhaps the biggest impediment for any policy to bear fruit in the region is the non-reconciliation of issues involving identities and citizenships. Communities like the Bengali Muslims, Hindu Bengali ‘Doubtful’ voters, Chakmas, Adivasis and Brus have been facing antagonistic reactions from the local hierarchical power systems on the basis of arguments such as ‘who came first’ and varied notions of indigenousness.

Can it be claimed that if these questions are not addressed, infusion of more capital will only enhance the inequality, in terms of wealth and opportunity, in the region?

Women in the region are facing multifarious challenges, while in Meghalaya the control of women in the matrilineal society is being challenged with regards to terms of ownerships, sex markets have emerged near the infrastructural sites of the region in recent times.

The unavailability of skilled labour for infrastructural activities in the region poses a further problem. The inability to participate in ‘developmental’ activities, notwithstanding resistance or logic against them, has created groups of young men affiliated with political organisations, student bodies and underground groups, who indulge in active rent collection from different stages of the projects, especially from the tertiary sector. This particular inability to participate in the projects adds to the outmigration from the region that has growing substantially in the last decade.

It can also be speculated that with greater connectivity comes a greater stake, which might reorient the terms of bargaining by the ethno-nationalist groups with the Indian state in order to ensure peace and, more importantly, mobility across borders.

The Look East and Act East policies, therefore, seemingly are a double-edged sword, which would presumably generate employment through logistical and infrastructural expansions, while the restructured labour market would facilitate migration which might provoke the fragile peace situation in the northeast region.

Migration could also see a rise in trafficking (labour, sex, human organs, weaponry), once again suggesting a different kind of connectivity – which runs parallel to the legal transits of capital and resources.

Northeast India has seen major resistance against state endeavours of resource extraction; the Look East Policy’s trajectory is also conspicuously associated with the extraction of oil, uranium and coal in the region, leaving scope for greater friction in the coming days.

Apart from ethnic divides, the region has also woken up to class conflicts in urban cities like Guwahati, where the settlements of the subaltern class on the hills of the city have led to intermittent conflicts between the settlers and the state authorities over ownership rights.

The Delhi-centric peripheral approach towards the region has so far failed to ensure a sustainable regime in the region for the last seven decades; pinning hopes on Look East policy only seems to elongate this failure. Rather than bridging the gaps between the ‘mainland’ and the Northeast in the post-colonial period, it’s more likely that ‘Look East’ will enhance the schisms in the neo-liberal period.

The article is an outcome of the research project titled Social Mapping of Logistics, Infrastructure and India’s Look East Policy conducted by Mahanirban Calcutta Research Group in collaboration with Rosa Luxemburg Stiftung.