Constitution bench faults governor for summoning state assembly, as well as orders passed by the deputy speaker which facilitated the ouster of the Congress and the swearing-in of a BJP-backed government 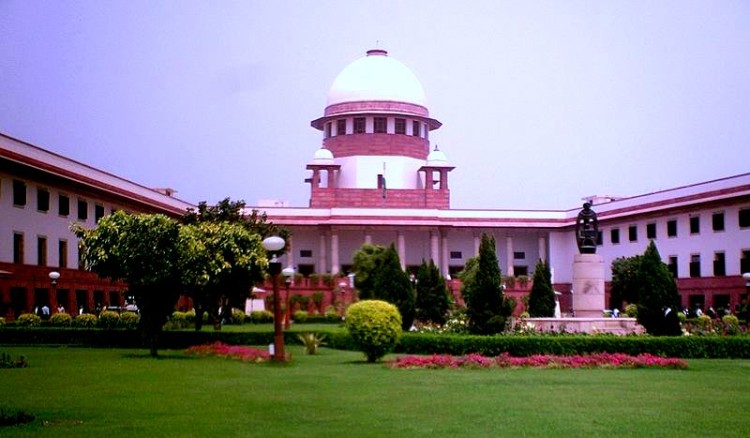 Supreme Court building with the sculpture in the foreground. Credit: Wikimedia Commons New Delhi: In a severe blow to the Narendra Modi government, the Supreme Court on Wednesday restored the Congress-led Nabam Tuki government in Arunachal Pradesh ousted by the Centre in January. This verdict, a slap on the face of the Bharatiya Janata Party, comes two months after the apex court reinstated the Congress government in Uttarakhand.

The court strongly indicted governor J.P. Rajkhowa’s decision to bring forward the session of the legislative assembly to December 16, 2015 – from its scheduled date of January 14, 2016 – and held that his action was illegal and unconstitutional. Further, it said the governor cannot direct a speaker (in this case the deputy speaker) on how assembly proceedings should be conducted, and fix the agenda for the house – namely to take up a resolution for the removal of the (Congress’s) speaker as the first item.

Arunachal Pradesh was placed under president’s rule on January 26, 2016. However, during the course of the hearing of a batch of petitions filed by speaker Nabam Rebia, Tuki and others challenging the imposition of president’s rule, the proclamation was revoked on February 19. On the same day the rebel Congress MLA Kalikho Pul was sworn-in as the new chief minister with the support of 18 dissident Congress MLAs, two independents and 11 BJP MLAs who gave the government outside support.

The bench quashed the Gauhati high court order that upheld Rajkhowa’s discretionary powers to summon or advance a sitting of the Arunachal Pradesh assembly. It also quashed the orders passed by the deputy speaker removing the disqualification order passed by the speaker on the rebel MLAs.

Writing the main judgment, Justice Khehar held that the governor did not have power to bring forward an assembly session without the aid and advice of the chief minister and his council of ministers. If the governor had any doubt about the majority of the Tuki government, the best course of action is to have ordered a ‘floor test,’ which he did not do.

On December 9, Rajkhowa advanced the date of the assembly session to December 16 during which period Rebia was removed through a resolution passed by 33 legislators, including 20 rebel Congress members.

After examining the provisions of the constitution and a catena of judgments, the bench held that it is not within the realm of the governor to embroil himself in any political thicket. The court said the governor must remain aloof from any disagreement, discord, disharmony, discontent or dissension, within individual political parties, and that the activities within a political party – including turbulence or unrest within its ranks – are beyond the concern of the governor.

The judges said it was open to the governor to take into consideration the views of a breakaway group. Under paragraph 4 of the Tenth Schedule of the Constitution, legitimacy is bestowed on a breakaway group that comprises no less than two-thirds of the members of the concerned legislature party. In the present case, however, the breakaway group comprised 21 members, while the Congress had 47 MLAs in the prevailing 60-member assembly. Thus the 21 MLAs did not constitute a legitimate and recognisable breakaway group.

The court said the governor could not adopt a constitutional course in support of the protests and assertions of an invalid breakaway group. Recourse could only be taken in case of a constitutional crisis, for instance when a government loses the confidence of the assembly. However, in this particular case, it had not been Rajkhowa’s position that Tuki had lost the confidence of the house, nor that the Congress could not sustain its majority in the assembly. Had that been his position, the governor would have called for a floor test, the court said. Admittedly, the governor never called for a floor test, nor did he ever require the chief minister to establish his majority in the house.

According to the bench, the governor’s actions based on feuds and wrangles of a breakaway group not recognised under the Tenth Schedule cannot be constitutionally condescended. The governor has no role whatsoever in the removal of the speaker (or deputy speaker) under Article 179 of the constitution. The question of adoption or rejection of a notice of resolution for the removal of the speaker is to be determined by the legislators. If the resolution for the speaker’s removal is supported by a simple majority of the members of the house, the motion has to be adopted and the speaker removed. Any action taken by the governor, based on disputations with reference to activities in which he has no role to play, is liable to be considered as extraneous. The court also said it is not for the governor to schedule the functioning of the assembly and it is not in his domain to schedule the agenda of the house. According to the bench, the governor has no role with reference to the proceedings in the assembly and must keep away from all that goes on within the House.

The bench said that as long as the democratic process in the assembly functions through a government that has the support of the majority, there can be no interference at the behest of the governor. A constitutional failure as contemplated under Article 356 is quite another matter, as is a constitutional failure under Article 360. It said the governor has not treaded the procedure postulated for a constitutional breakdown. According to the court, there is no justification for a governor to be disturbed about proceedings in connection with the disqualification of MLAs under the Tenth Schedule because he has no role therein. Even the chief minister and his council of ministers have no concern with the disqualification proceedings contemplated under the Tenth Schedule. Therefore, the legitimacy or illegitimacy of the disqualification is beyond the governor’s consideration.

That being the constitutional position, according to the court, there can be no justification for the governor initiating action based on proceedings commenced against MLAs under the Tenth Schedule. Any action taken by the governor based on the proceedings being carried on under the Tenth Schedule would be a constitutional impropriety. It is open to individual MLAs, against whom disqualification proceedings are taken (or who have been disqualified, and consequently have lost their membership of the house), to seek judicial review. The fact that the 14 MLAs who were disqualified by the speaker – Rebia – had on December 15 approached the Gauhati high court, which had stayed the order of their disqualification, demonstrates that there are appropriate remedies in place.

The bench said the governor need not worry about, or involve himself in, issues that are within the realm of other constitutional authorities, and that the constitution provides for checks and balances, and a regime of redressal for all situations.