A look at how the BJP's cadres are canvassing for votes in UP's Farrukhabad district. 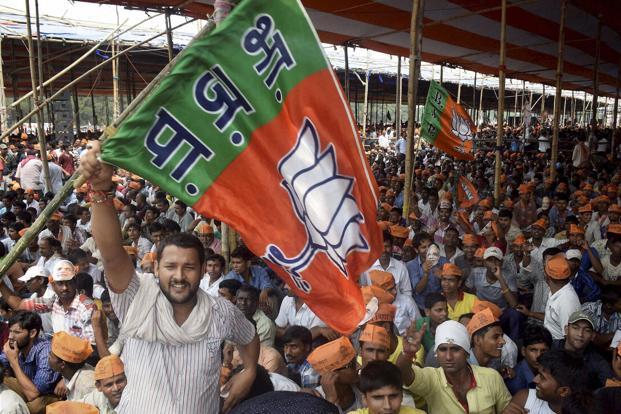 A BJP supporter waves the party flag at a ‘Parivartan rally.’ Credit: PTI

Farrukhabad, Uttar Pradesh: Over the past few days, 21-year-old Shivam has been busier than his friends. Being the booth president of Rajepur West, which falls under Farrukhabad district’s Amritpur constituency, he is responsible for the smallest unit in the organisational machinery of the BJP, a cadre-based party. The final year B.A. student looks after PR and undertakes several organisational responsibilities that often affects his studies. His parents resent it but to make sure that his party forms the government, Shivam is ready to do his part.

The RSS, the BJP’s­ parent organisation, has a motto – Sanghe Shakti Kaliyuge (only unity has power in this era). Ask any BJP member what the four things needed in politics are and they will say ideology, membership, organisation and movement.

Ideology defines the direction of this party and separates it from the others. Through training, members and party workers are prepared, going on to form the backbone of the organisation.

During its protests and rallies, the party claims to voice the issues of various sections of the society, and by doing so, it widens its reach among those groups and expands its support base.

Political analysts believe that the BJP, which calls itself an ideological party, gives great importance to organisation and workers. During the Ram Mandir movement, the BJP, under the direction of Govindacharya, recruited non-Yadav OBC caste members as ‘foot soldiers’ of the Hindutva brigade, and an entire army of Lodha, Kurmi and Shakya leaders was formed.

It was a golden period for the organisation, with leaders from all communities joining it. Later, members of other castes, except the upper caste, began deserting the party. By 2007, even the Brahmins moved to the BSP.

In 2012, Kalyan Singh parted ways with the BJP and took with him a major portion of the Lodha votes. The party reached its lowest point in the Uttar Pradesh assembly election. Not being in power for years and a shift in caste equation left the BJP emaciated.

However, during the Lok Sabha election in 2014, Narendra Modi’s candidacy changed everything by once again making inroads into the non-Yadav community. With the formation of the government, the routine “organisational restructuring” began with renewed vigour.

In the last two years, the BJP has again become pro active. A closer look at Amritpur assembly constituency in Kanpur’s Farrukhabad district explains a lot.

The BJP district president, Vimal Katiyar, met this correspondent at a shop in Farrukhabad. The 45-year-old is a Kurmi leader who joined the BJP during the 1991 Ram Mandir movement. Explaining the structure of the organisation at the assembly level, he said, “Each assembly seat has an election management committee and a steering committee. The management committee constitutes the party and the assembly in charge chosen by the top brass heads it. The steering committee is formed and run by the candidate. All the booths of a district, have booth committees with a president and 11-21 members. Ten to 15 booths form one sector governed by a sector in charge. Similarly, ten to 15 sectors are grouped under a mandal president. Each constituency has three to five mandals and all mandal presidents directly connect with the assembly president.”

Katiyar proudly claims that the party committees at booth, sector and mandal level are all set for the elections. When asked what the district committee does, he said, “It goes backstage during the polls. But we keep working on coordination. The party has four to five campaign bikes, a video van and a campaign rath in each constituency. We also organise programmes for the senior party leaders.”

When this correspondent attempted to contact Amritpur’s poll in-charge Kuldeep Dubey, he was directed to Rajepur mandal’s president and asked to reach the party office. A temporary office had been set up at a community hall. Mandal president Vibhvesh Singh Rathore was holding a meeting in the lawn to discuss a conference of booth committees to be held the next day. Rathore, 27, holds an M.A. and a B.Ed. and became the president in 2016. 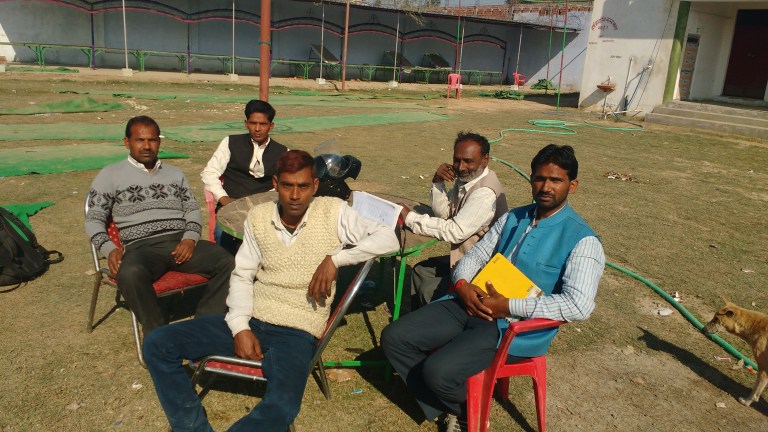 “There are 145 booths and 11 sectors under my supervision. Committees of ten to 15 members at every booth are vigilant,” said Rathore with confidence.

When asked about the programmes organised by the party during the last month, Rathore provided a long list. “First, there was a digital membership campaign followed by a Mahasampark Abhiyan to boost connectivity. There was the ‘Tiranga Yatra’ which reached every booth. After an organisational shuffle, new committees were formed. A backwards castes convention was also held for every two assembly constituencies. Women, SC-ST and youth conventions were held at the district level. ‘Parivartan rallies’ were also organised in all constituencies in November.”

“In the past two years, our workers have not rested,” said Shambhu Kushwaha, who is from Deoria and has been appointed by the party to overlook the work for the polls.

The sector in charge, Dharmendra Singh, lives close by. Two booth presidents, Shivam and Sanat Singh, were also present at his home. The principal of Saraswati Shishu Mandir school, 36-year-old Dharmendra, is the oldest team member. When asked how often he contacts the booth presidents, he replied, “Two or three of them on a daily basis, and the rest every three to four days.”

The assembly party president is 40-year-old Dubey who took voluntary retirement from the Air Force to study social work at Agra University where he contested in the students’ union elections and lost. He has also worked as a welfare officer at a sugar mill, a job he left to completely dedicate himself to party work. When asked why he joined the BJP, he said, “It is the only party which works with a nationalist agenda. The rest of them are busy appeasing Muslims.” 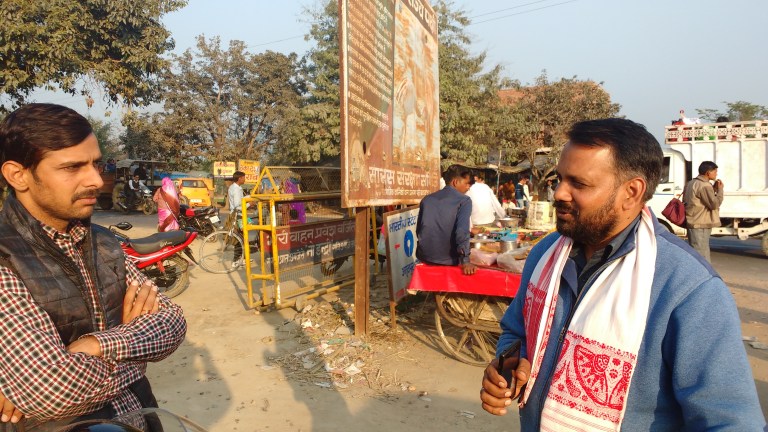 On the connectivity between different booths, he says, “I have personally visited three-fourth of the booths more than once. I stay in constant touch with all sector in charges.”

When asked where all the candidates were, Dubey replied, “They are all attending a Jan Sampark rally in Bhataula to be addressed by MP Mukesh Rajpoot. Amritpur has a strong vote base of Lodha and Shakya communities. Susheel Shakya is a senior BJP leader. He will get votes from within his community but Lodha votes are equally important. Rajpoot, who was Kalyan Singh’s close ally, will help the party expand its vote base among Lodhas.”

“Uma Bharti will address a rally too,” Dubey added. “Besides, there is a good number of Thakurs in Rajepur which is why several mandal, sector and booth presidents are from the community.”

This is Dubey’s second consecutive term as the assembly president because the constituency gets around 15,000 Brahmin votes. In short, caste calculations are always at work.

As this correspondent left for Bhataula, Dubey and Rathore were busy arranging free petrol and doing phone recharges for booth presidents.

A rough ride on a kutcha road led to Bhataula, where a convoy of vehicles had already arrived. An old man said, “This time, the BJP will get the votes.”

In 2012, Rajpoot contested from another seat in the district on the ticket of Kalyan Singh’s Jan Kranti Party. He got the Lodha community votes, sending the BJP to third place.

During the past five years, not only have the equations changed but the entire structure of the BJP has also transformed. How much this affects the BJP’s fate in the state remains to be seen.

This article originally appeared in The Wire Hindi.