The peace process worked in Tripura because the Left Front government worked simultaneously to improve the conditions of life for common people. 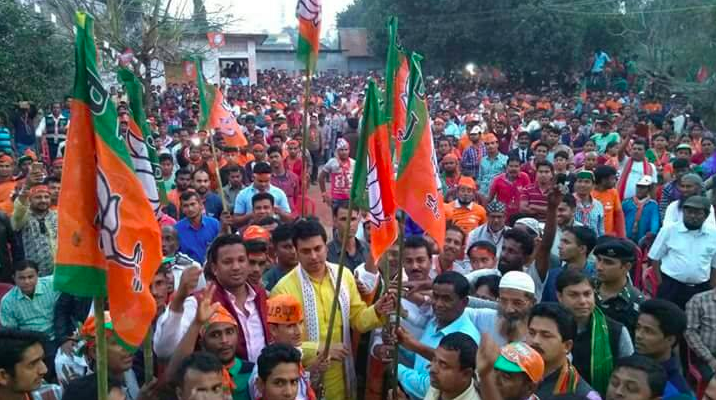 Tripura votes on February 18. The third smallest state in India has undergone a remarkable transformation in the last 20 years. Perhaps the most significant achievement of the last two decades has been the conversion of the state from one ridden with militancy and ethnic strife to a small island of peace in the troubled Northeast. In 2012, Manik Sarkar, chief minister of the Communist Party of India (Marxist)-led state government, announced that the Armed Forces (Special Powers) Act was no longer in force in the state. This announcement was not challenged or opposed by either the armed forces or from the central government.

This change was not brought about by draconian measures which themselves create new cycles of violence. Instead, the Left Front government which assumed office in 1993 combined tough but transparent administrative methods with a commitment to building bridges between communities. Its supporters in a wide network of tribal organisations, women’s organisations, peasants’ and workers’ organisations, trade unions of teachers and employees, students and youth organisations were all associated with this effort to rebuild trust between tribals and non-tribals, between people of different religions and regions,  step by step, brick by brick.

This process could only yield permanent results, as the government worked simultaneously to improve the living conditions of the common people. Government efforts were greatly hampered by the geographical conditions of the state, which consists of large tracts of hilly and forest land on the one hand, and a shared boundary on three sides with Bangladesh, on the other. Lack of industry, infrastructure like roads, power, railways etc., very low literacy rates and high indices of poverty compounded the problem.

In Tripura, 30% of the population is tribal. Twenty years ago, they were mostly illiterate and practised ‘jhoom cultivation’ with very low yields. The principal tribal language, Kokborak, did not have a script till recently and it is during this Left Front government that tribal children began being taught in their own language through textbooks in Kokborak. At a time when tribal culture, tribal languages and tribal beliefs are under attack in different parts of the country, the promotion of Kokborak in Tripura  was accompanied by concerted efforts to preserve and promote tribal culture, arts and traditions.

In 1993, Tripura was connected to the rest of India by one inadequate railway line, one highway and a few flights. Under the Sarkar government, however, new railway tracks have been laid, the lone highway has been extended and will soon reach the Bangladesh border, giving Tripura access to the port of Chittagong.

Twenty years ago, the Tripura airport was a small, forgotten outpost that received 20 flights a week. Today, there are 196 flights a week. While much more needs to be done to improve connectivity and communications, not much can be done without the help of the Centre, which has not been very supportive.

Similar achievements have been made in the field of water and sanitation, crucial for the health and well-being of poor people, especially women. Today, drinking water has been provided to each village and hamlet in the state. In the towns, piped water has been made available to almost all citizens. The construction of toilets has been commendable. For a population of just 37 lakh people, 7,39,983 toilets in individual homes were constructed in 2016-17 alone. Hundreds of community toilets have also been built. It is not surprising that this tiny state has won 113 Nirmal Gram Puruskar awards. Open defecation – so terribly common in most parts of our country – is not seen anymore in Tripura.

Tripura, that had a literacy rate of 30.98% in 1971, achieved 100% literacy in 2014. Literacy has meant more than just teaching people to write their names. The doors to a real education for all have been flung wide open. Drop out rates have come down and the number of children graduating from each stage of schooling is growing. Naturally, aspirations have also been rising and the government has tried to keep pace with these by establishing numerous colleges, three universities, various institutions of vocational training and two medical colleges.

A comparison with a state like Madhya Pradesh, which also has a sizeable tribal population, is revealing: MP has also been governed by the same party (BJP) for 15 years now, but only 41.2% of the tribal population is literate (less than even the national average of 59%) and, more distressing, 57.3% have either never seen a school or have only attended one till Class 5. The situation among tribal women is worse – only 28.4% of them are literate. 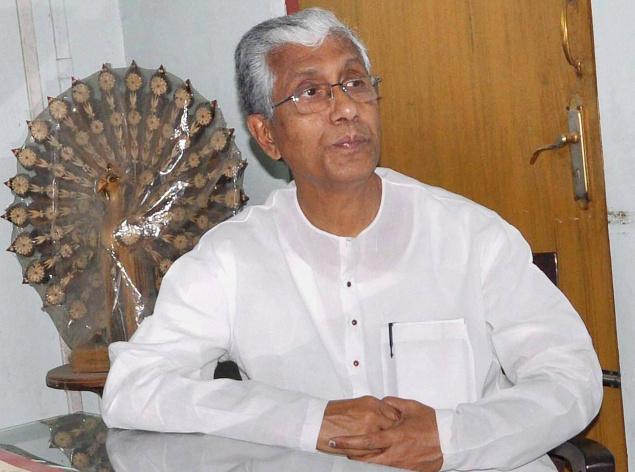 Unemployment is a major problem in Tripura and dealing with it has been a priority for the Left Front government. The state has achieved the best record nation-wide for implementation of the Mahatma Gandhi National Rural Employment Guarantee Act and has provided 90 days work for all job-card holders. Unfortunately, the Centre is withholding and reducing funds for this scheme and the state is being forced to fall back on its own meagre resources.

The state was traditionally facing a deficit in foodgrain production, specially rice. It has, however, been able to consistently improve agricultural yields without recourse to the ‘Green Revolution; methods of overuse of water, fertiliser and pesticides. The Left Front government develops and purchases seeds from farmers and promotes methods of cultivation that consume less water and utilise organic fertilisers. Tripura is now recognised internationally for its successful adaption of the system of rice intensification, which has increased yields and incomes of its numerous paddy farmers. The state government ensures that the farmers’ crops are bought at remunerative prices.

As a result of its ‘people first’ policies, the Left Front government has also achieved a huge reduction in the numbers of its citizens who are below the poverty line. At the national level, the BPL population is 21.92%; in Gujarat it is 16.63%; in Maharashtra 17.35% (both industrialised states), Jharkhand and Chhattisgarh (tribal-dominated states) are above 36%. Remote and often-forgotten Tripura has a BPL population of only 14.05%.

To really understand the transformation that Tripura has undrgone, it is necessary to compare the situation today with what preceded it.

The earlier Left Front Government between 1978 and 1988 faced tremendous difficulties. Militant and separatist groups were very active and, despite protests from the state government, safe havens were provided to them in Bangladesh and the Centre did not intervene. In fact, the narrow political ambitions of the Congress leaders in the state and the partisan role adopted by those who ruled at the Centre after 1980 made the state prone to violence and bloodshed. The Mandai killings occurred in 1980 when armed tribal militants attacked a settlement of Bengalis, burnt every home and then attacked the homeless people with terrible cruelty, leaving 350 dead.

In this atmosphere, the Centre intervened by first imposing the Disturbed Areas Act and then, later, AFSPA. Instead of peace, combing operations accompanied by atrocities became common. Harassment, beatings, sexual attacks culminated in the infamous Ujan Maidan atrocity of 1988, when a large group of tribal women, brought from several villages, was allegedly raped over three days by Assam Rifles personnel. One of the women was 80 years old.

Terror was unleashed against supporters of the Left Front and dislodging it in the 1988 elections became the main objective of the Congress in the state and at the Centre. It entered into an alliance with the Tripura Upajati Juba Samiti, a tribal front for the separatist Tripura National Volunteers. Between 1985 and 1988, more than 300 people, mostly tribals, were killed by the TNV. As the 1988 elections approached, the numbers of those killed increased. Central ministers increased the frequency of their visits and directly met with administrative officers. Just before the elections, 91 people were killed and more than 2,500 Left Front supporters were arrested. The elections were a shameful farce. The Left Front, which still received a larger proportion of the votes, was declared defeated.

Five years of Congress-TUJS rule saw not just a wave of killings and rapes, but also complete disruption of development. The Tribal Autonomous Development Councils were starved of funds.

The desire of the people for peace and development brought the Left Front back into government in 1993 .

The central government of the day now speaks of restoring peace in the Northeast. Unfortunately, the BJP in Delhi and in the state are emulating what the Congress did earlier. Ministers are visiting the state repeatedly. They hold direct meetings with the administration, bypassing the state government. They issue irresponsible, false and provocative statements and make wild charges against the Left Front and its chief minister. They have also entered into a completely opportunistic and dangerous alliance with the Indigenous Peoples Front of Tripura which, in many ways, is the political successor of the TNV-TUJS.

Many of those who are members of the IPFT and BJP today were storm-troopers and leaders of the Congress and the TUJS-TNV in the l980s. All six Congress MLAs who were elected in 2013 left their party, joined the Trinamool Congress and then, later, the BJP. One of them is the son of the infamous Congress chief minister, Samir Ranjan Burman, who has also left the Congress. Another was a TUJS MLA in l983 and l988 and a Congress MLA in 2013.

In the recent past, the emboldened IPFT and other similar outfits have been raising slogans demanding a break-up of the state. In the course of one of their demonstrations, the young newspaper reporter, Santanu Bhowmick, was murdered. Two of those accused of this horrible crime, who were absconding, joined the BJP in the party office and now one of them, Dhirendra Deb Varma, is a joint BJP-IPFT candidate.

The BJP campaign is getting shriller by the day. The threats they are holding out, the accusations they are making and the divisive tactics that they are promoting are bringing back memories of the bloody run-up to and aftermath of the 1988 election. These memories are being rekindled by the vile campaign that has been launched to dislodge the Left Front. But, the people of Tripura are determined to once again ensure that the past is not repeated.

Subhashini Ali is a former member of parliament from Kanpur and politburo member of the Communist Party of India (Marxist), the ruling party in Tripura.