Finance minister Piyush Goyal was the last declared treasurer of the party. Whether he continues to hold the post de facto or has been replaced is something the BJP is hiding from both the public and the Election Commission. 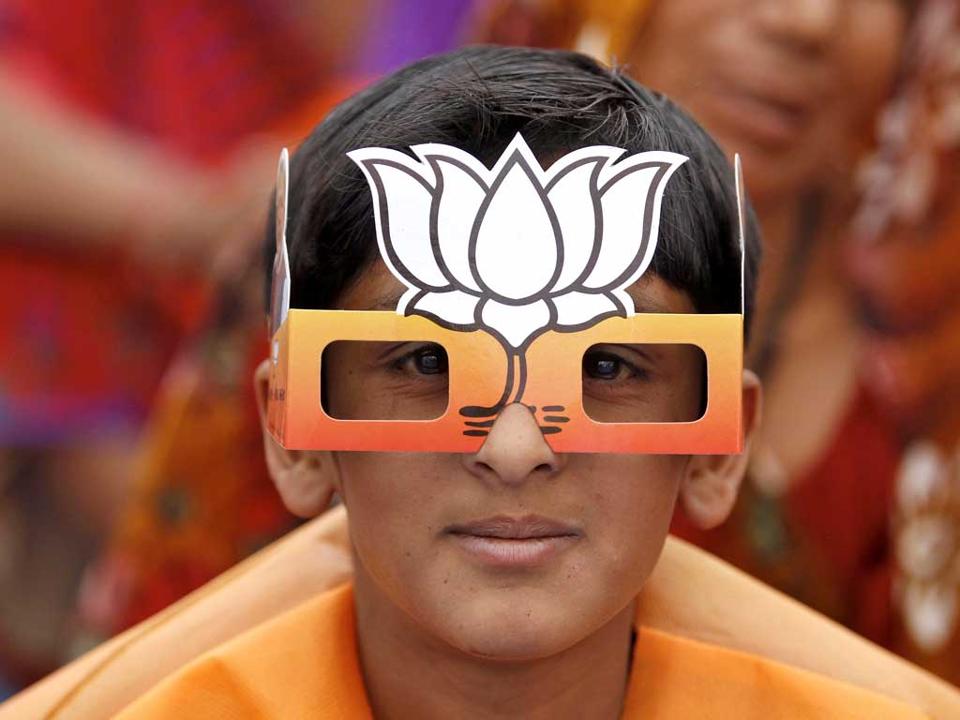 #Updated on June 14, 2018 with a response from the Election Commission of India and Swati Chaturvedi’s response to the ECI.

New Delhi: The Bharatiya Janata Party is one of the richest political parties in the world, with a declared income of Rs 1,034 crore during 2016-17, the last year for which returns have been filed with the Election Commission.

This was a particularly good year for the BJP, with its income shooting up by a stupendous 81% compared to the year before. More significantly, the money raised by the party was more than double the figure raised by all other national parties combined.

So which BJP leader should take a bow for the amazing financial performance of the party and having given it the biggest ever war chest ahead of the crucial 2019 Lok Sabha elections?

This is where things get murky, and a huge question mark emerges over the role of the Election Commission (EC), which is supposed to regulate and audit the working of political parties, in addition to conducting elections in the country.

In its mandatory declarations to the EC, the BJP for the past few years has not been disclosing who its treasurer is. The BJP’s audited returns for 2016-17, for example, have an indecipherable signature which appears to say “for treasurer”, without disclosing who the party’s treasurer actually is. [Update: The EC now says the signature is that of Arun Singh, national general secretary of the BJP and in-charge of its headquarters.]

Instead of the party treasurer’s signature, the BJP’s returns are signed ‘for treasurer’.

The secrecy continues on the party’s official website; the page titled ‘National Treasurer of BJP’ has been left blank. 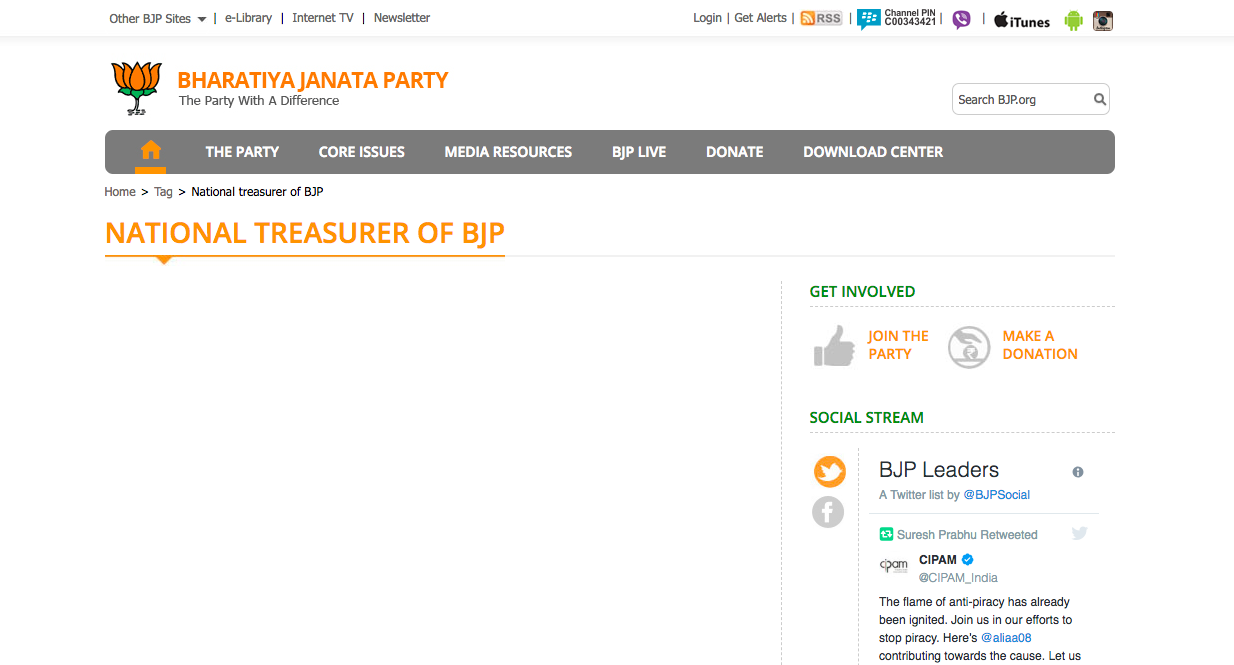 Former chief election commissioner S.Y. Qureshi told The Wire that the BJP’s declaration to the EC was wrong, and the EC, instead of meekly accepting the declaration, should have issued notice to the party and asked them to declare who the treasurer of the BJP really is.

Another former CEC, speaking on condition of anonymity, said the guidelines for financial transparency adopted by the EC in 2014 clearly require “the treasurer of the political party or such person as authorised by the party” to maintain its consolidated accounts. Asked why the commission had not insisted on the party identifying who its treasurer or “authorised” person was, he said the financial returns are scrutinised at a “lower level” and this issue was never referred up.

Intriguingly, before the BJP’s 2014 win and the installation of the Narendra Modi government, the party’s declared treasurer was Piyush Goyal, now Union finance and railways minister. When Amit Shah announced the names of the party’s officeholders in August 2014, the post of treasurer was not among them. There was some speculation in the media that a Modi confidante Parindu Bhagat, known as ‘Kakaji’, would get the job but that did not happen. So does Piyush Goyal continue to be de facto treasurer of the party even while in government, which would be a clear cut case of conflict of interest? Or if he has fully disengaged, who is the party’s treasurer? The BJP has kept mum on the subject. 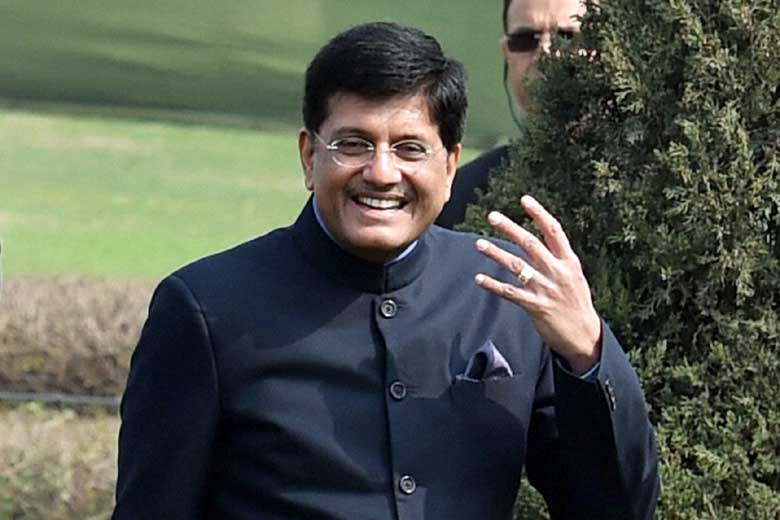 Finance and railways minister Piyush Goyal. He was, until some point in 2014, the Bharatiya Janata Party’s national treasurer. The BJP never said who succeeded him. Credit: PTI

Former CEC N. Gopalaswami told The Wire that the signature and name of the responsible authority signing such an account statement has to be legible and if it isn’t, the EC needs to find out who it is.

Another former CEC, T.S. Krishnamurthy, said that while he would not like to comment on the current matter pertaining to the BJP as he has not seen the documents in question, “from my past recollection, I can state that it all depends on what the party says in its constitution about who would be responsible” for making its account declarations.

The BJP’s constitution mandates the party president to appoint a national treasurer. It also says that the treasurer’s duties are to maintain income and expenditure accounts and have them audited. As far as raising funds for the party is concerned, printed receipts have to be issued  and “each receipt [of party funds] shall bear the facsimile signature of the concerned treasurer” at the Central or state level.

So the question which arises is whose facsimile signature has been appended to the receipts the BJP has issued for hundreds of crores it has raised at the national level since 2014?

If Goyal is involved even peripherally with the party’s accounts, this would not be the first case of conflict of interest at the highest level of the Modi government. Goyal, defence minister Nirmala Sitharaman, commerce minister Suresh Prabhu, minister for state for aviation Jayant Sinha and minister of state for external affairs M.J. Akbar all continue to be directors of the India Foundation, a think-tank run by Shaurya Doval, son of national security advisor Ajit Doval, and BJP general secretary Ram Madhav, whose programmes have attracted corporate sponsors, including MNCs.

In general, political parties have insulated their treasurers from allegations of conflict of interest by keeping them away from government positions as treasurers typically get their hands dirty while raising funds. Motilal Vora is the treasurer of the Congress party and signs its accounts. He was never a minister in the Manmohan Singh-led United Progressive Alliance (UPA) government.

The secrecy around the treasurer has come about after Amit Shah was appointed BJP president in July 2014 to finish Rajnath Singh’s interrupted tenure. In January 2016, Shah was elected unopposed to a full three-year term as party president. Under the constitution, he is entitled to a second consecutive three-year term. Authoritative sources have told The Wire that the consensus within the RSS mothership is that Shah will either get a second term or continue on extension as president till the general elections. Modi has apparently said that Shah’s current term as all-powerful BJP president will be co-terminus with his own tenure as prime minister.

Speculation is rife that perhaps Shah, who along with Goyal is said to be the main fundraiser for the party, has assumed the functions of BJP treasurer as well. In a transparent political party, which the BJP used to pride itself on being, details like the identity of the treasurer should be in the public domain. But it seems that in the ‘Modified BJP’ – where Modi and Shah call all the shots – nobody else, inside the party or outside, not even the EC, can dare ask these questions.

A senior cabinet minister told The Wire, “ We used to pride ourselves on electing our president, yet Shah was nominated… I am a cabinet minister and I honestly cannot tell you who the BJP treasurer is. Who took over after Goyal, or whether he continues, is a mystery. But I know from my corporate contacts that he and Shah are the main fundraisers of the party.”

The telling blanks in the declaration to the EC and on the party’s official website suggest that the Modi-Shah duo are aware of the irregularities in the party’s records.

Constitutional experts say that the EC, which has acquired a reputation of partisanship after Modi nominated A.K. Joti from his Gujarat days as CEC, should be asking the BJP tough questions.

After the disqualification of Aam Aadmi Party MLAs on Joti’s last day in office – a decision subsequently struck down by the high court in a huge snub to the EC – and the recurring controversy over electronic voting machines, the EC has lost face. Not asking the BJP to reveal who its treasurer is will just be the latest example of caving in to the Modi government.

My attention has been drawn to the story by Swati Chaturvedi.

The Wire has published a report dated 11.6.2018 stating that the audited annual report of the BJP for F.Y. 2016-17 has not been signed by the Treasurer of the party and instead it has the signature of some unknown person who has signed “for treasurer”. The news article also quotes former CEC, Dr. S.Y. Quraishi who is reported to have said that the EC, instead of meekly accepting the declaration, should have issued notice to the party and asked them to declare who the Treasurer of the BJP really was.

In this regard, it is relevant to note that Clause 3(vi) of guidelines on transparency and accountability in party funds and election expenditure matter issued by Election Commission of India vide their reference No.76/PPEMS/Transparency/2013, dated 29th August, 2014 states as follows:

“While the recognized political parties shall file all reports, namely, the contribution reports in Form 24A, the audited Annual Accounts as certified by the Chartered Accountants, referred to in para 3(i) above, and the Election Expenditure Statements, with the Election Commission of India, the unrecognized parties shall file the same with the Chief Electoral Officer (CEO) of the respective states (i.e. the state where the party Head Quarters is situated) in the prescribed time and manner.”

A perusal of the annual audited accounts of the BJP for Financial Year 2016-17 filed with the ECI shows that it is duly signed and certified by the chartered accountant Veni Thapar, partner V.K. Thapar & Company. As such the annual accounts furnished by BJP for the F.A. 2016-17 are in conformity with the aforementioned clause of the transparency guidelines. Incidentally, the signatures under the heading “Treasurer” attributed to some unknown person are that of Shri Arun Singh, National General Secretary and In-charge Headquarters of BJP, as reflected in the forwarding letter dated 18-04-2016 containing the list of office bearers submitted by BJP, which is signed by Sh. Arun Singh.

It would have been fair if  Ms Chaturvedi had contacted ECI in first instance and taken ECI’s point of view to include in the story.

Sheyphali B Sharan
Addl. D.G. PIB and Spokesperson for ECI

This clarification by the Election Commission of Indian makes no sense.
1.  I have not said that the returns are not audited so why is that the central point of the EC’s response?
2. The ECI still doesn’t tell us who the treasurer of the BJP is, which was the central point of my exposé.
3. How is it relevant that the indecipherable scribble is that of Arun Singh as he is still signing on behalf of the BJP’s treasurer, who remains unknown/unidentified.
4. The story is based on official EC and BJP documents.
5. Nowhere in my story do I say that the returns filed by the BJP have not been audited.
6. The ECI should be asking the BJP who its treasurer is.
In light of the above, it is not clear what the Election Commission would like me to clarify.
Note: This story has been updated on June 14, 2018