Battleground Bengal: What led to the Escalation of Political Violence in the State

The latest incidents of violence are centred around Bhatpara, where recently two people have died and more than a dozen were injured.

BJP activists agitate in front of the Barrackpore office Commissioner of Police, in North 24 Pargana on June 21. Two people were killed and three others suffered severe injuries in clashes between BJP and TMC workers in the Bengal town. Photo: PTI

Kolkata: The pattern may be a familiar one, but the spurt in violence in parts of West Bengal in the weeks following the announcement of the 2019 election results suggests that a more lasting transformation may be under way.

For decades now, violence has been an integral part of Bengal politics but as workers of a bruised but aggressive Trinamool Congress (TMC) and an assertively buoyant Bharatiya Janata Party (BJP) clash with each other, it is worth noting that perhaps at no time in the recent past has the balance of political forces between the ruling parties in Delhi and Kolkata on the one hand, and their political foot soldiers on the streets on the other, been what it is today.

The latest incidents of violence are centred around Bhatpara in the North 24 Parganas district, where at least two people have died and more than a dozen injured, including policemen. According to reports, 17-year-old Rambabu Shaw and a jute mill worker Dharam Veer Shaw were killed by an unidentified mob.

Following the first clash, which happened hours before the inauguration of the Bhatpara police station, Section 144 was imposed in Bhatpara and Jagaddal.

#WATCH West Bengal: Police use baton to remove locals from the spot in Bhatpara in North 24 Parganas, as a BJP delegation visits the area. pic.twitter.com/wyE7vdJOq6

It must be noted that the political situation in West Bengal is so volatile that even a road-side quarrel between the BJP and TMC is capable to leading to lethal violence now. Last week, five people were killed over an argument about party flags in Sandeshkhali, around 70 km from Kolkata.

Most of the post-poll violence in Bengal has taken place in the North 24 Parganas district for two distinct reasons. First, the district shares a border with Bangladesh and lends itself to Hindu-Muslim tension, with post-election communal polarisation playing the role of catalyst. In 2017, Basirhat city in the district had seen communal clashes.

Also read: As BJP and Trinamool Fight It Out, Who Will Save Bengal from Political Violence?

The second reason is Arjun Singh, the former TMC strong man who contested the Lok Sabha election on a BJP ticket and won the Barrackpore seat. Until now, Singh was the MLA from Bhatpara. For over two decades, he has been a key asset of the TMC. He held sway over the whole of the Barrackpore constituency because of his booth-level organisational skills and the support he had from the state’s Hindi speakers.

its not a coincidence that a person has been killed and bombs have been hurled at exactly the same location where @MamataOfficial threatened people with dire consequences for shouting Jai Shree Ram few days back this is dastardly and inhumane. #savebengalsavedemocracy #Bhatpara pic.twitter.com/sU8s2FOXbc

Today, the BJP’s ‘cadres’ are a mishmash of former TMC, Communist Party of India (Marxist) and Congress workers. The recent election has shown that the BJP is as adept at using violence as the TMC or CPI(M). In such a situation, the strong emergence of the BJP has meant the addition of a new and volatile element into the mix – polarisation.

“West Bengal politics was always violent,” says political analyst Bishwanath Chakraborty, adding, “However, the violence has been formalised by the current TMC government.”

Chakraborty feels that an inadequate police force has resulted in it taking longer than usual to resolve the law and order situation in the state.

Days after the Lok Sabha election results were declared, hundreds of councillors, also known corporators, from various municipalities, joined the BJP. About five TMC MLAs and one CPI(M) MLA also joined the saffron party. They had perhaps sensed that the wind is now blowing away from Mamata Banerjee’s TMC.

The BJP now claims it has a majority in the municipalities of Nahihati, Bhatpara, Kachrapada, Bijpur, Bongaon and Darjeeling.

The pattern so far suggests that as a party makes political inroads, it also acquires physical assets. Along with the municipalities, the saffron party has ‘taken over’ a number of TMC party offices in various locations in West Bengal. The Trinamool has sought aggressively to defend its turf but the BJP, which is in a hurry, has also indulged in brinkmanship and fanned violence to secure its end, especially in the North 24 Parganas district.

Immediately after two BJP workers were killed in Sandeshkhali, the state BJP unit said it wished to bring their bodies to Kolkata for cremation. Kolkata is more than three hours away from where the incident actually took place. The idea was clear — to gain political capital from political violence. 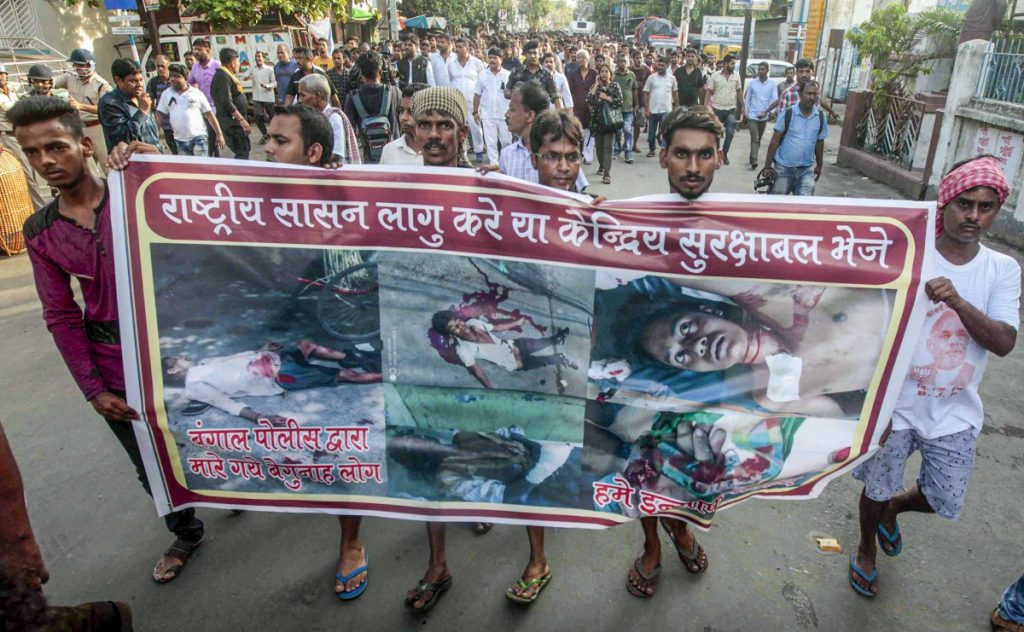 Locals participate in the funeral procession of the two people who were killed in the June 21 violence at Bengal’s Bhatpara where clashes broke out between two groups. Photo: PTI

BJP, however, alleges that it is the TMC which is fostering violence. Recently, BJP Bengal president and MP Dilip Ghosh said, “TMC encourages violence. Criminals walk openly with arms in front of the police administration. In such a place, you can’t hope to have any peace.”

Law and order under strain

Indeed, some of the blame for the violence in Bengal will have to be borne by the ruling Trinamool, as law and order is completely a state subject. With the state reeling from political violence for the past one month, Mamata’s administration has clearly failed to deescalate tension and put an end to the killings.

Over the years, Trinamool has encouraged the politicisation of the state administration, especially the police. Now, with the change in the political scenario in Bengal, the government might be losing control over police administration too.

Various BJP leaders have been openly advising – and even warning – the police that Mamata’s ‘time is up’ and they should either work properly or face the consequences after the BJP comes to power in Bengal.

Mamata’s adamant stand in some cases has especially kept the tension alive, if not aggravated the situation. The West Bengal chief minister said that there would be “no victory parade in Bengal” and her government prevented the BJP from taking out rallies claiming it could lead to a “law and order situation.” These decisions further accentuated the rift between the two parties.

Leaders still under Mamata are hard pressed to corner the BJP now, feels Chakraborty. “TMC leaders were all powerful even some months ago. Their words would have been taken as the final word. Now, after the result, it is the BJP which clearly has the say on many issues. So the TMC cannot tolerate it,” says the political analyst.

Maidul Islam, who teaches political science at the Centre for Studies in Social Sciences at Kolkata, says that Bengal is now witnessing an ‘area control mechanism’ by the ruling party. “This is similar to what happened after Nandigram, when the erstwhile ruling party, the CPI(M), sought to rein in the TMC by capturing specific areas,” notes Islam.

Islam also pointed out that there is an organised pattern in this post-poll violence. “By creating a law and order situation, the BJP wants to engage the TMC in administrative work and not focus on strengthening the party. It is not being given any cooling period,” he says.

Feuds within the BJP’s Bengal unit are also evident, though the media has not focused much on this aspect, and the party has also consistently worked to contain the damage from infighting. The Bengal BJP now has two clear factions – the new and the old. The new comprises all the leaders who crossed over from various parties to the BJP just prior to the election.

This new BJP faction is the one that can be credited with involvement in the ongoing political unrest in Bengal. As noted earlier, most of the violence is happening in North 24 Parganas district, especially in places which fall under the Barrackpore Lok Sabha constituency.

After Arjun Singh vacated the Bhatpara assembly seat, his son Pawan was given the ticket from there. Soon after, Arjun Singh’s nephew, Sourav, became the new chairman of the Bhatpara municipality. The old guards of the BJP have not taken kindly to these developments.

Also read: While BJP Goes All Out to Consolidate Strength in Bengal, TMC Appears at a Loss

BJP infighting has already started and could grow in the coming days. Many locals feel that some of the violence is also as a result of fighting between the BJP’s old and new factions.

The role of media

Both the national and regional media’s roles need to be questioned in the political violence that has unfolded in Bengal. While most of the media have reported the violent incidents in detail, they have not investigated the precise sequence of events or sought to provide the relevant backstory.

At the swearing-in of the new National Democratic Alliance government, the BJP invited the families of 54 party workers who had been killed by rival parties over the years in Bengal. This move was clearly aimed at cornering Mamata on a national stage.

The number of 54 is dodgy to say the least. In the past, state party leaders have cited figures ranging from 25 to 80. Yet most media outlets took the ‘final’ number given by the party as sacrosanct, without cross-checking.

NDTV’s investigation into 23 of the BJP’s list of ’54 killings‘ found that seven cases were fake, seven were genuine and the remaining nine, ambiguous. The channel studied police documents, met family members of the BJP workers and interviewed eyewitnesses.

Whoever is getting killed in Bengal, the BJP is saying it is their men, says TMC’s North 24 Parganas district president Jyotipriya Mullick.

“So many of our party workers were killed in the last one week, but the BJP has been telling everyone that it is their men who have been killed. I would like to request the media to report things properly,” says the food and civil supplies minister.