"We are running only a newspaper and you are running illegal bars," Congress's Pawan Khera had said, referring to Smriti Irani. 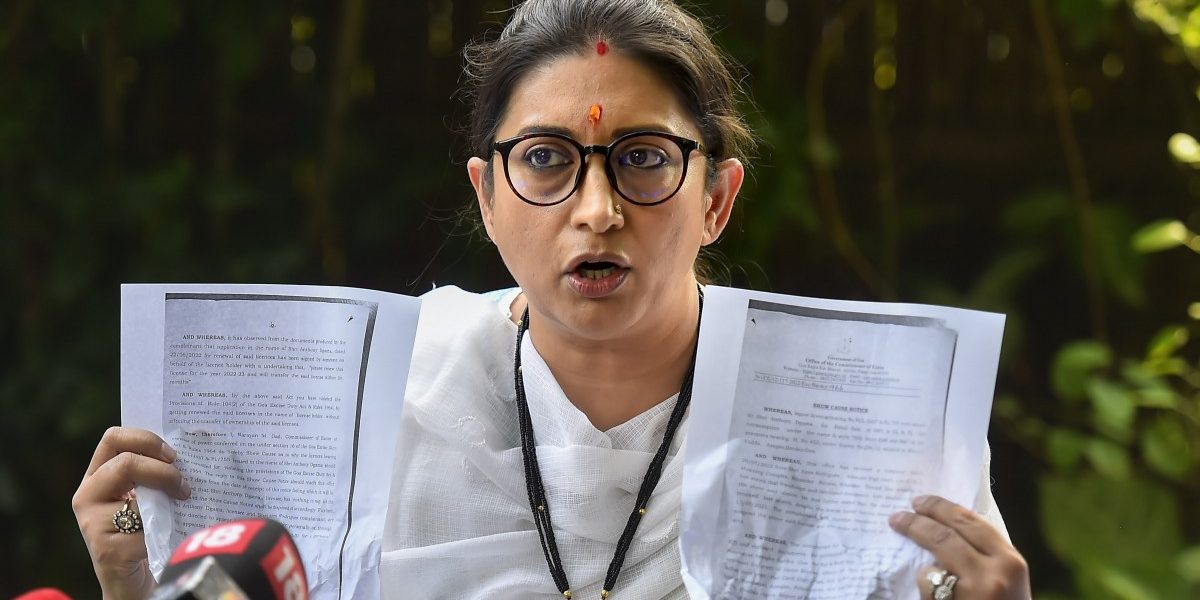 New Delhi: The Congress on Saturday demanded Union Minister Smriti Irani’s sacking, alleging her daughter was running an illegal bar in Goa, but the BJP leader claimed the “malicious” charge was made at the Gandhi family’s behest due to her vocal stand in the National Herald case and vowed to fight back.

Congress spokesperson Pawan Khera, its general secretary Jairam Ramesh and the party’s Goa chief Amit Patkar made the allegations at press conferences in Delhi and Panaji, targeting Irani and her family.

But, in a statement, Kirat Nagra, the lawyer of Irani’s daughter, said the allegations are baseless and asserted his client is neither an owner nor operating the restaurant called Silly Souls Goa and has also not received any show cause notice from any authority as alleged by them.

Nagra said various “erroneous, frivolous, malicious and defamatory social media posts (were) being made by various vested quarters trying to settle political scores with our client’s mother, the renowned politician Smriti Irani each of which is predicated on blatant falsities”.

Attacking Irani, Khera said Smriti Irani was raising all kinds of questions from Rahul Gandhi, “but we want to ask her what problem do those running bars have with those running newspapers.”

The BJP has been attacking the Gandhi family for their alleged role in the National Herald case. The Enforcement Directorate has questioned both Sonia and Rahul Gandhi, drawing strong protests from the opposition party. The Congress has dismissed the allegations as vendetta and intimidatory tactics by the government.

“We demand from the prime minister that Smriti Irani should be immediately sacked as a minister from the Union cabinet. You owe it to this country, to the youth of this country,” he told reporters.

In a hard-hitting press conference at her residence in the national capital, Irani alleged that the allegation was levelled not only to “assassinate” and “publicly mutilate” her daughter’s character but to politically malign her also and dared the opposition party to show proof of any wrongdoing,

She asserted that her 18-year-old daughter Zoish is a first-year college student and does not run any bar.

The Congress held the press conference to target her daughter at the behest of the Gandhi family, she alleged.

“Those who assassinated my daughter’s character, I will see you in the court of law and the court of people,” she said.

She dared Rahul Gandhi to fight from the Amethi Lok Sabha seat again in 2024, and vowed that she will make him bite the dust again. Irani had defeated the former Congress president in Amethi in the 2019 Lok Sabha polls.

Irani noted that Khera flashed documents to say that the bar was given a show-cause notice and asked if the papers had her daughter’s name.

Earlier, Congress leader Jairam Ramesh said they will raise this issue in Parliament.

“This kind of illegality is not possible without the influence from a senior minister in the union cabinet…we demand from the prime minister to take the resignation of Sriti Irani,” Ramesh said.

Khera also alleged that bouncers of private security have been deployed around the restaurant in Goa, to keep the media out of bounds.

In Panaji, Patkar alleged that the renewal for the restaurant’s bar licence has been applied in the name of a dead person.

He claimed that the Excise Commissioner, responding to the complaint against the fraud, had issued the show cause notice returnable on July 29.

We have understood that the officer has been pressured not to act. If the government takes action, the Congress party will take to the streets. Let him inquire as per the rules, he added.