After Tasting Defeat in UP By-Polls, BJP Punches Back in Rajya Sabha Elections

The poll results make it clear that the run-up to 2019 general elections will be a prolonged cat-and-mouse game between the opposition and the BJP. 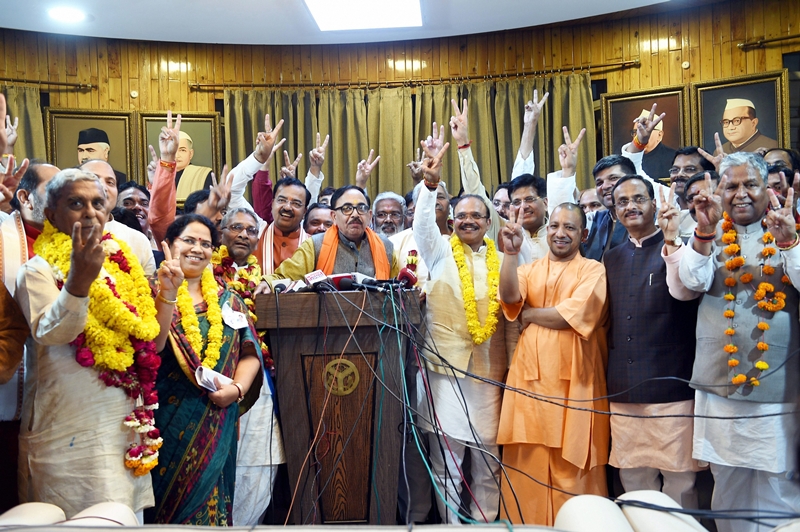 New Delhi: In a clear attempt to strike at the heart of opposition unity, the Bharatiya Janata Party (BJP) has yet again engineered a victory in the Rajya Sabha polls that were held on March 23. Known as the party that takes every election – from panchayat to parliament – seriously, the saffron party emerged at the top again, but not without minor setbacks.

In what was yet another Rajya Sabha election that was a rare nail-biting affair – one may recall how senior Congress leader Ahmed Patel had to fight his toughest battle in Gujarat last year when the BJP tried to benefit from cross voting in the preferential voting system, only to be reined in by the Election Commission of India (ECI) – BJP won 28 of the 59 Rajya Sabha seats that had fallen vacant across 17 states.

In the seven that went to polls, the BJP pitched for a bitter contest in Uttar Pradesh and Jharkhand – both states where the opposition had decided to vote unitedly against the BJP. In all other states, the polling went on smoothly, each party winning seats according to the number of MLAs it had in the state assembly. But the BJP had fielded one extra candidate each in UP and Jharkhand. This left the stage wide open for cross voting.

In UP, given their current strength in the assembly, the BJP was in a position to easily win eight of the ten seats. The Samajwadi Party, which had 47 votes, could easily get its candidate, actor Jaya Bachchan, elected. Since every candidate needed at least 37 votes to win, the SP was left with 10 extra votes. It was understood that in lieu of the support the Bahujan Samaj Party (BSP) gave to the SP’s candidates in the recently-held by-polls of Gorakhpur and Phulpur, the Akhilesh Yadav-led party would return the favour by transferring its extra votes to BSP candidate, Bhim Rao Ambedkar, in Rajya Sabha polls. BSP, which had 19 votes of its own, hoped to get its candidate to the upper house with the support of SP, three independent MLAs, and other smaller parties.

However, following the humiliating loss it had to face in the by-polls, the BJP fielded its ninth candidate – businessman, Anil Kumar Agarwal – to ensure that BSP does not get a place in the Rajya Sabha. At the same time, it engineered defections within the SP. SP’s senior leader Naresh Agrawal and his son and MLA from Hardoi, Nitin Agrawal, joined the BJP in this interim period.

On March 23, the battle for the tenth seat went down to the wire. One BSP MLA, Anil Singh, defeied the party whip and cross voted in favour of the BJP. At least two of the three independent MLAs, too, are understood to have voted in favour of the BJP even as one BSP MLA, Mukhtar Ansari, and one SP MLA, Hari Om Yadav – both of whom are lodged in jail in different cases – were not allowed by the UP administration to vote.

As a result, the BJP eventually landed the tenth seat and managed to keep the BSP away from the upper house. The opposition leaders soon used the opportunity to say that the BJP used all its tricks to keep a Dalit out of the parliament.

The BJP, however, will have a cause to worry about as the UP battle also split the National Democratic Alliance wide open. It was reported that its ally, UP cabinet minister Om Prakash Rajbhar-led Suheldev Bharatiya Samaj Party – which has a considerable influence among the OBC community, Rajbhars, said to be around 18% in the state – also cross-voted against the BJP. Om Prakash, in recent times, has been voicing his dissent against the saffron party. For the BJP, which is struggling to keep the NDA intact – with the Telugu Desam Party’s exiting and other allies too speaking about their multiple problems with the apparent high-handedness of Narendra Modi-Amit Shah duo – this will surely be counted as a minor setback.

In Jharkhand, too, where voting took place for two seats, the BJP had to be content with one seat despite the fact it went all out to land the second seat. Here too, a joint opposition, which included the Congress that had only seven votes of its own, the Jharkhand Mukti Morcha, and former chief minister Babulal Marandi led-Jharkhand Vikas Morcha (Prajatantrik) – had fielded a Congress candidate Dhiraj Prasad Sahu. But the BJP fielded two candidates despite knowing it had only enough numbers to secure one seat. Its first nominee Sameer Oraon won easily. For the second seat, however, a JVM (P) MLA cross-voted in favour of the BJP’s second nominee, Pradeep Kumar Sonthalia. The drama escalated when two opposition votes were declared invalid by the ECI.

Marandi objected to the cross-voting even as the BJP pressed for its validity. When the returning officer rejected Marandi’s petition, the Congress and JVM(P) approached the ECI. Meanwhile, the Congress candidate, Sahu, told the media that he had lost because of two invalid votes. However, after great confusion prevailed for more than 15 hours during counting, he was declared elected by a narrow margin.

BJP still short of a majority

While in UP, the BJP manoeuvres to defeat a joint opposition worked, it backfired in Jharkhand. While the saffron party won 28 out of 59 seats, the tactics it used to defeat opposition in the two states may show it in poor light and dampen the spirit of its comfortable victories in many other states.

After the elections, BJP is now the largest party in the Rajya Sabha but is still short of majority. The Congress won three out of four seats – a gain of two – in Karnataka, while the BJP’s strength was reduced to only one seat. Media moghul Rajeev Chandrasekhar was the only BJP candidate who won. In West Bengal, Mamata Banerjee-led Trinamool Congress (TMC) retained its four seats while Congress leader Abhishek Manu Singhvi, who got the support of TMC, won the fifth seat from the state. The Communist Party of India lost the only seat it had held earlier.

Backed by the Asaduddin Owaisi’s party, AIMIM, the Telangana Rashtra Samithi (TRS) won all the three seats. Two of these seats were held by the Congress earlier. BJP’s Saroj Pandey defeated Lekhram Sahu of the Congress to retain its seat in Chhattisgarh. In Kerala, the Left Front-supported candidate M.P. Veerendra Kumar, owner of the Mathrubhumi media house, won easily. He is currently a member of the Sharad Yadav’s faction of Janata Dal (United).

Among prominent leaders who won were union finance minister Arun Jaitley and BJP’s GVL Narasimha Rao. They had contested from UP.

In the 245-member upper house, the BJP added another 28 to its previous kitty of 58, while the Congress reduced its numbers. While still short of the majority mark of 126, the Narendra Modi-led party consolidated its position further. However, its added strength will not translate into any increase in its heft in the upper house as of now.

With the party going all out to outfox the opposition even in the Rajya Sabha elections, one can only assume that it is taking the prospects of a united opposition-in-making seriously. And that the run-up to 2019 general elections will be a prolonged cat-and-mouse game between the opposition and the BJP.