But Modi's wanton quoting of Tagore strikes as too much of an attempt to woo Bengalis in election season, considering the overall unfamiliarity with Tagore and his verses, displayed by BJP leaders. 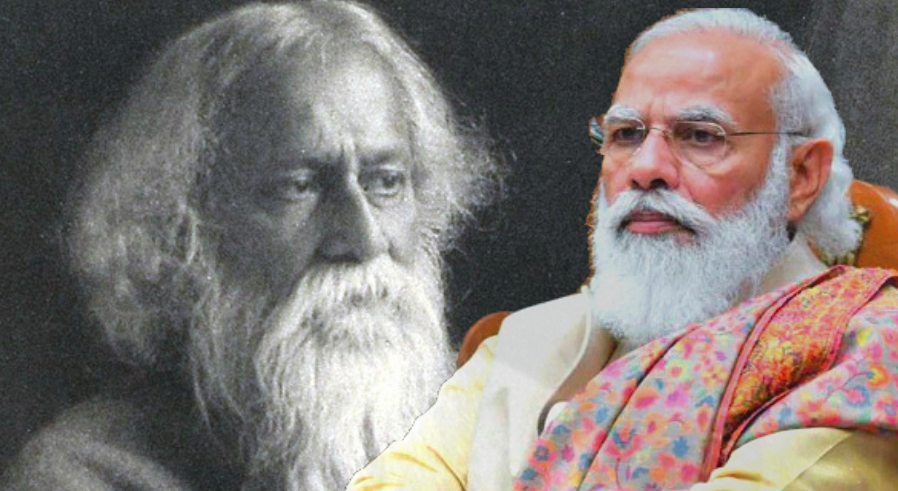 Rabindranath Tagore. In the foreground is Narendra Modi. Photos: Wikimedia Commons and Twitter

Swamy wrote that the National Anthem – composed by Rabindranath Tagore – raised unnecessary “doubts” as to whom the poem was addressing.

“It is also inappropriate for post 1947 independent India – for example the reference to Sindh in the words of the national anthem,” he wrote.

On December 12, Swamy shared the letter on Twitter along with a copy of acknowledgement from the prime minister.

PM’s acknowledgement. I hope he implements by Jan 23, 2021 pic.twitter.com/r6DOdaz9qK

Interestingly, perhaps unbeknownst to Swamy, ‘Subh Sukh Chain’ too mentions ‘Sindh’ in the second line itself.

For a section of Bengalis, this request is an insult to Tagore.

Five-time Congress MP from Bengal, Adhir Ranjan Chowdhury hit back at Swamy and wrote a letter to the prime minister as well, stating that Swamy’s letter both in “spirit and understanding is narrow, divisive and violates the deep national sentiment that exists on the subject matter.”

“Swamy’s understanding of Jana Gana Mana is too limited and narrow as he takes mere territorial understanding of the present India and hence, he considers ‘Sindh’ as a misfit in the post-1947 India. But India is not merely a territorial land, it is an ocean of cultures and ideas with an infinite capacity to knit together infinite pluralism in perfect harmony. Gurudev, as Rabindranath Tagore is loved and remembered, is our nation’s pride and a global icon. He was primarily a humanistic thinker and his Jana Gana Mana only portrays the essence of humanism,” Chowdhury wrote. 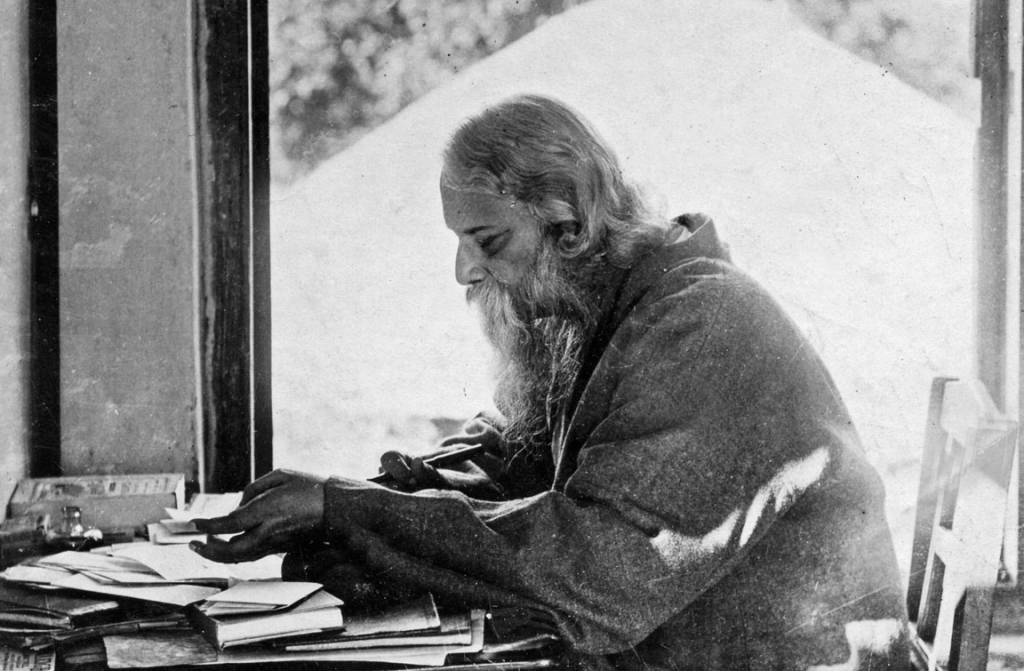 Swamy’s letter may have come a good 73 years since Independence, but the Bharatiya Janata Party to which he belongs and organisations ideologically similar to it has often been critical of Tagore and his ideas.

In 2017, Dinanath Batra, head of the Rashtriya Swayamsevak Sangh-affiliated Shiksha Sanskriti Utthan Nyas, recommended to the National Council of Educational Research and Training (NCERT) that Tagore’s thoughts, especially those related to nationalism be removed from NCERT textbooks.

After facing a lot of criticism in parliament, then Minister for Human Resources and Development, Prakash Javadekar, assured the House that no such thing was going to happen.

In 2017, while speaking at an event in Nagpur, RSS chief Mohan Bhagwat said that after winning the first Nobel Prize in 1913, Tagore was on a world tour with Gitanjali. In 1916, he visited a Japanese University and was supposed to address the students there, however, “no students turned up.” Bhagwat said, “No matter how big an individual is, one does not gain enough respect if he comes from a weak country.”

Senior Tagore scholar, and former director of Nippon Bhavana, a centre Tagore started to foster Indo-Japanese relations, Amitrasudan Bhattacharya said Bhagwat’s comment had no base. “Tagore had elaborately documented his visit to Japan and there is no mention of this incident. He had always been very truthful about his foreign interactions. He was so touched with the relationships he built with the Japanese intellectuals that he started the Nippon Bhavan in Shantiniketan. So the question of such a rebuff does not arise,” Bhattacharya told TOI then.

Tagore for the Hindutva cause

For the past few years, many BJP leaders in Bengal have tried to reimagine Tagore and have portrayed him as a Hindutva exponent. They keep referring to Swadeshi Samaj, an essay Tagore wrote after the partition of Bengal in 1905, to claim that he was a proponent of the Hindu Rashtra.

In 2019, historian Diptesh Chakrabarty wrote in The Telegraph, that he “was simply appalled to see a distorted and caricatured Tagore now being mobilised to fan the flames of anti-Muslim sentiments among the Hindus of West Bengal — all in the interest of harvesting a few more seats in the elections to the Lok Sabha.”

In the piece, Chakrabarty writes that upon being forwarded an email that purported to show through various quotes how critical Tagore was of Islam, Chakrabarty found there was distortion and falsification of what the poet actually said throughout. 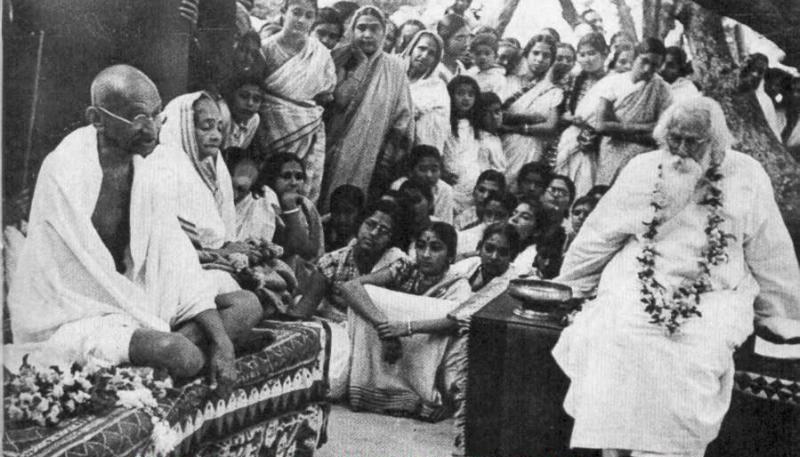 What was entirely missing from this quotation, wrote Chakrabarty, were the first few words with which the sentence began: “Everyday, to save themselves from social humiliation, lower-class Hindus …”

“Thus, the sentence actually was an indictment of Hindu society and its caste oppressions, not of Islam,” Chakrabarty wrote.

A common myth unofficially propagated by the RSS is that the ‘Jana Gana Mana’ was actually written to greet King George V, and that it was made India’s National Anthem in place of the ‘Vande Mataram’ only to ensure that the Muslim population were happy with the choice.

Tagore against the Hindutva cause

Memes circulated by rightwing accounts on social media often call Tagore ‘characterless,’ ‘anti-Hindu’ and a ‘pimp of the seculars and the British’.

Propaganda outlets also attempt to put forth the cause of Bankim Chandra Chattopadhyay, who wrote ‘Vande Mataram’, as the rightful winner of the Nobel Prize instead of Tagore. While this is done in a clear effort to assuage Bengalis by propping up another Bengali and ‘true Hindu’ hero, the point to be noted here is that Chattopadhyay died in 1894, a good seven years before the Nobel was first given out in 1901. 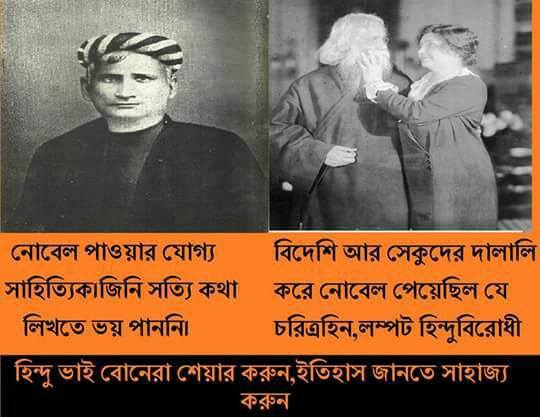 (L) Bankim: The litterareur who truly deserved the Nobel prize. He was not afraid to speak the truth.
(R) Tagore (seen with Helen Keller reading his lips): The characterless, licentious, anti Hindu agent of foreigners and secularists who got the Nobel.

Of late, BJP has increasingly been using Tagore to prove its Bengali credentials and counter the “outsider” rhetoric of Trinamool Congress. So much so that, the saffron party in one of their membership drives in Nadia district used a popular Tagore song —’O amar desher mati, tomar pore thakai matha’ (‘O my motherland! I bow to thee’), written in the heydays of the freedom movement.

These days, Prime Minister Narendra Modi very often quotes the bard in his speeches. The latest was on December 10, while laying the foundation stone for new parliament building, Modi quoted Tagore as having said, ‘Ekota utshaho dhoro. Jatio unnoti koro. Ghushuk bhuboner shobe bharater joy!’ (‘Continue with the enthusiasm of unity. Every citizen should progress and India should be hailed all over the world!’)

But Modi’s wanton quoting of Tagore strikes as too much of an attempt to woo Bengalis in election season, considering the overall unfamiliarity with Tagore and his verses, displayed by BJP leaders.

BJP leader and Tripura chief minister, Biplab Deb on the occasion of Tagore’s birth anniversary in 2018 said, “Rabindranath Tagore returned his Nobel Prize in protest against the British.” Tagore never did that, but he did refuse the knighthood.

To top it all, while addressing a rally in Birbhum during the Lok Sabha election last year, Union home minister Amit Shah said, “Rabindranath Tagore was born in Shantiniketan.” The mistake lent itself to a tweet by the Bengal BJP unit which claimed that “Visva-Bharati is Rabindranath Tagore’s birthplace”. The tweet was taken down after a few hours.