Faced with severe criticism of the government's handling of the pandemic, the party is now pulling all the stops to portray Modi as the saviour. 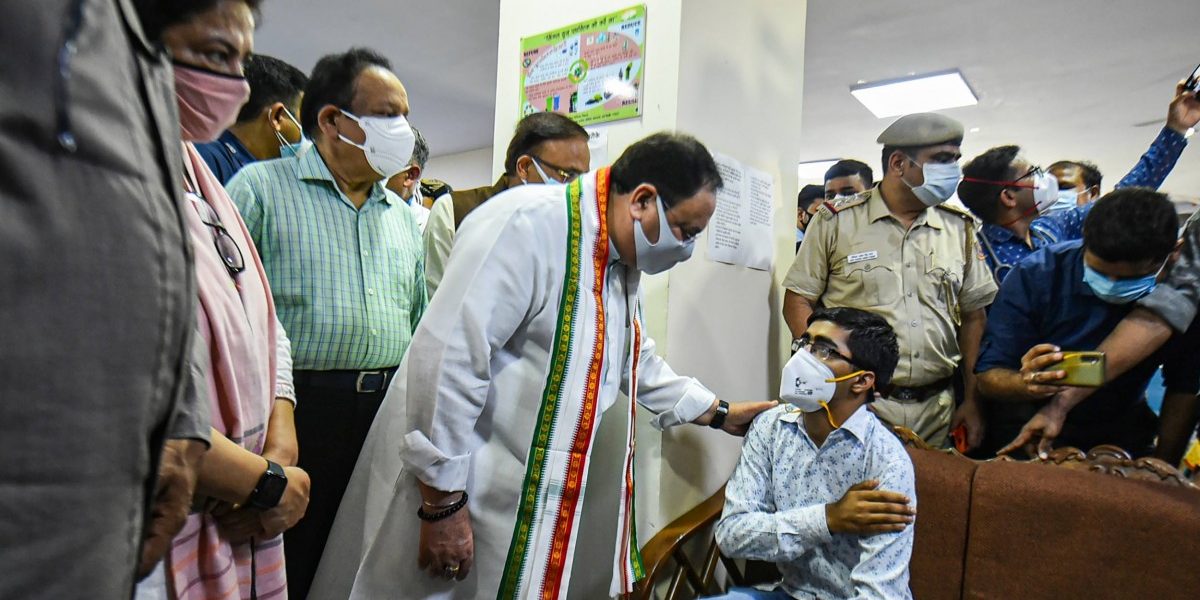 Within hours, Nadda declared that the vaccination programme is also the “fastest”, despite the fact that only around 5% of India’s population has been inoculated with both doses until now. A number of other countries have done much better.

Nadda, who was also accompanied by the Union health minister Harshvardhan, said that his visit to the RMLH was nothing more than a routine check on the vaccination centre and BJP’s help desk. But it quickly turned out to be a political platform from which the BJP national president made one of his most rousing speeches.

Unaffected by the glaring violation of social distancing norms even as the devastating second coronavirus wave is yet to fully recede, the unmasked Nadda hit out at the opposition for allegedly propagating “vaccine hesitancy” and “misleading” people, emphasised his party’s motto of seva in the face of “quarantined” opposition forces, and ultimately reinforced Modi’s supposed dedication towards ending the pandemic.

“Friends, the vaccine has been used as fodder for political games. I don’t want to discuss that today,” Nadda said, before beginning his spiel against the opposition.

“We know that the opposition has only been interested in creating obstacles and misleading people. Despite that, India’s 130 crore people have shown positivity towards the vaccination drive and intend to follow PM Modi’s call to get inoculated,” he said, adding that only because of the prime minister, India has been able to produce not one but two vaccines in a period of nine months. 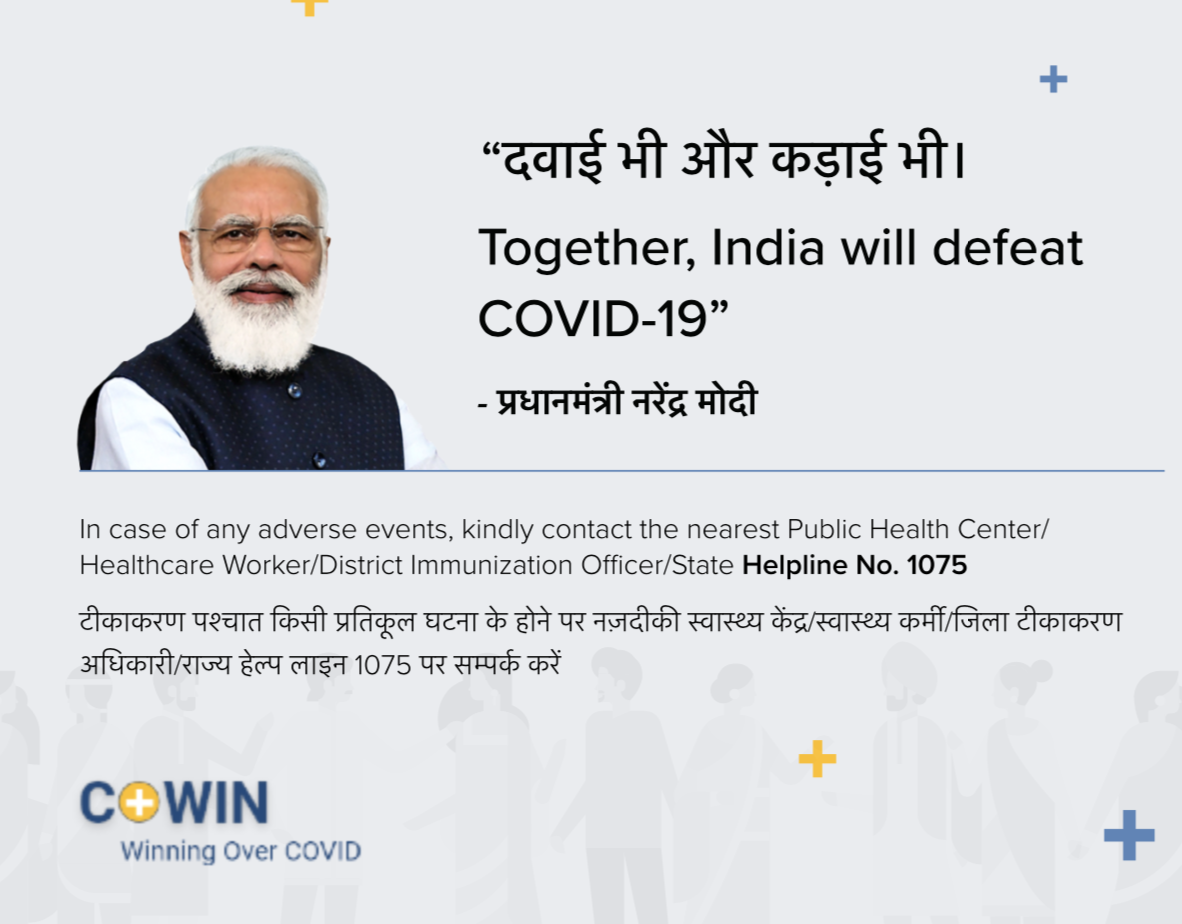 “Bharat aaj vaccination banane wala bhi, dene wala bhi, aur duniya ko dene wala bhi desh hai (Today, India is a country which not only produces and uses the vaccines but is also in a position to export vaccines to other countries),” Nadda said.

Even as Harshvardhan stood in stoic silence beside him, Nadda emphasised that he had been the Union health minister and went on to give a “roadmap” – something which the Union government hasn’t spelt out clearly as yet.

However, the BJP president took it upon himself to say that by December 17, companies will be given licenses to manufacture vaccines. “In May, eight crore vaccines will be produced, in June – 10 crore, in July – 17 crore, in August – 19 crore, in September – 42 crore, November – 56 crore, December – 59 crore. Altogether, we will have 257 crore vaccines by December, enough to complete double doses for everyone.”

More than anything else, Nadda’s visit to RMLH appears to be the beginning of BJP’s well-coordinated publicity blitzkrieg around India’s vaccination drive in the months to come.

Ever since the pandemic hit India last year, the BJP-led Union government’s focus has constantly been on better communication to negate criticisms of its handling of the crisis, but the latest public relations exercise is a step-up from its previous “positivity” campaigns.

Nadda’s statement that every vaccination centre will have a BJP help desk is also a fair indication of the party’s political outreach plans, especially in the eight states where assembly elections are scheduled next year, the most significant being India’s most populous state Uttar Pradesh.

The entire BJP machinery has been battling criticism for its alleged mismanagement of the pandemic. It was pretty clear earlier this year that the BJP-led Union government would ride the vaccination drive to sidestep such allegations, but the second coronavirus wave was more deadly than it predicted. Undeterred, the saffron party has been quick to kickstart its political campaign almost immediately after the impact of the second wave is beginning to recede.

Also read: Modi Only World Leader to Use Vaccination Certificate to Push Cult of Personality

A “Thank You Modi ji” campaign around the “free vaccination drive” has started almost simultaneously. Not only the BJP, but even government institutions have been instructed to contribute to the Modi image build-up.

Days after controversially asking students to tweet “Thank You Modi Sir” for cancelling CBSE board examinations, the Kendriya Vidyalaya Sangathan has now asked its schools to put up “Thank You PM Modi” banners and hoardings in their premises for free vaccines. 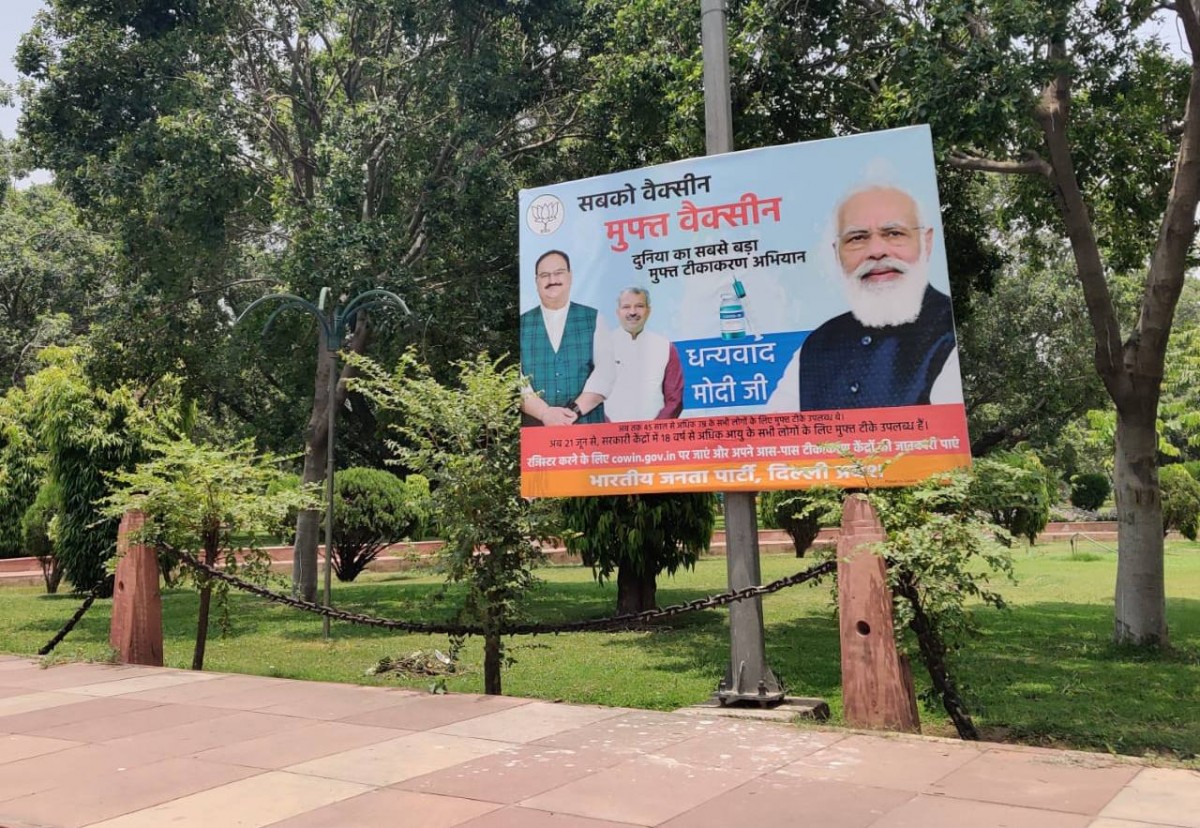 The higher education nodal institution the University Grants Commission (UGC), too, instructed all government-funded colleges and universities to put up posters that read, ““Vaccine for All. Free for all. World’s largest vaccination camp. Thank you Modiji.” Delhi University was among the first universities to put up such posters in its campus, website and social media handles. Taking a cue, several private universities also followed suit.

“Vaccines for All. Free for All. Thank you PM Modi.” pic.twitter.com/IROKmtxknw

The universities and colleges were following UGC secretary Rajnish Jain’s instructions in a WhatsApp message to the vice-chancellors and college principals to put up such posters thanking the prime minister for the free vaccination drive that kicked in on Monday (June 21).

“The Government of India is starting free vaccination for 18 years and above age group from tomorrow, i.e.  21st June, 2021. In this regard Universities and Colleges are requested to kindly display these hoardings/banners in their institutions. The approved design (creatives) of hoardings/banners in Hindi and English, as provided by the Ministry of Information & Broadcasting, are attached for your ready reference,” Jain’s text message to the university authorities said. His message is a clear indication that the publicity drive around vaccination is part of a central design, coordinated by the Union government.

The conspicuous but well-coordinated publicity drive, which is perhaps unprecedented given how the same template is being used to “thank” the prime minister by the Union and BJP-led state governments and institutions funded by them, is clearly aimed at undercutting the opposition’s criticisms, which have had a visible impact. The saffron party has once again put Modi at the forefront to do the heavy-lifting.

In the prestige election-bound state Uttar Pradesh, the party has also begun a booth-level campaign to facilitate vaccination and free ration distribution scheme under the PM Gareeb Kalyan Ann Yojana, which has been extended until November. The Adityanath-led government has also launched its own additional free ration scheme to top up the Central programme.

Speaking to The Wire, a political analyst in UP who wished to remain anonymous said, “The real purpose of the publicity drive is to establish the ground connection that the BJP has seemingly lost in UP. The drive is only a part of a well-rounded attack on the opposition. Ahead of the election build-up, the vaccination drive would be a good way for the party to touch base with people. While the opposition parties are being asked to stay within COVID-19 protocols, BJP has found a way to kickstart its campaign for elections.”

Clearly, the BJP has found a political opportunity in a disaster, and intends to remain ahead of the opposition parties. The opposition parties have already started attacking the BJP and the Modi government for using public money for its own political gains. Congress leader Rahul Gandhi, while welcoming the free vaccination drive, warned that the Union government should not be looking at vaccination only as a public relations exercise but as a permanent solution. He released a white paper on the very day the vaccination drive kicked in, and said that his party’s intention is not to point fingers at the government but to supply them with important inputs and insights so that it doesn’t repeat the same mistakes.

Congress spokesperson Randeep Surejwala also spoke in a press conference on Monday about former Prime Minister Manmohan Singh’s achievements in vaccinating the population against polio, but without shouting it from the rooftops. Pro-Congress social media accounts too shared graphics making this claim. 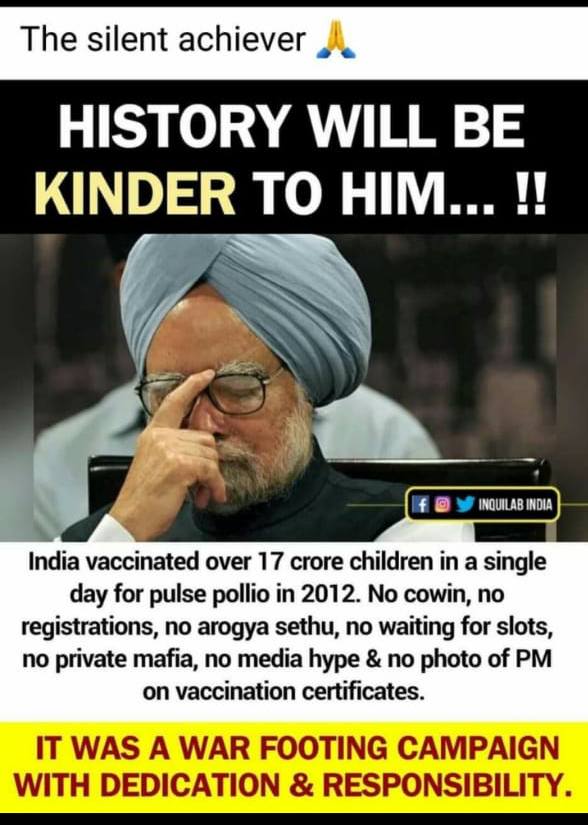 A graphic shared on social media.

While the BJP and Modi made a big deal of the number of vaccine doses administered on Monday – 8.6 million, a record high – a Scroll.in report pointed out that this may have been made possible by BJP-rules states slowing down the pace of vaccination in the previous few days.

In the midst of such hectic political messaging from both ends, it remains to be seen whether the vaccination drive achieves its set goals or not. The Union government’s first test would be to avert a third wave, which many experts have been predicting, or at least minimise its devastating effects.