The party's two-man tag team has brought out the worst in the people and their own party. 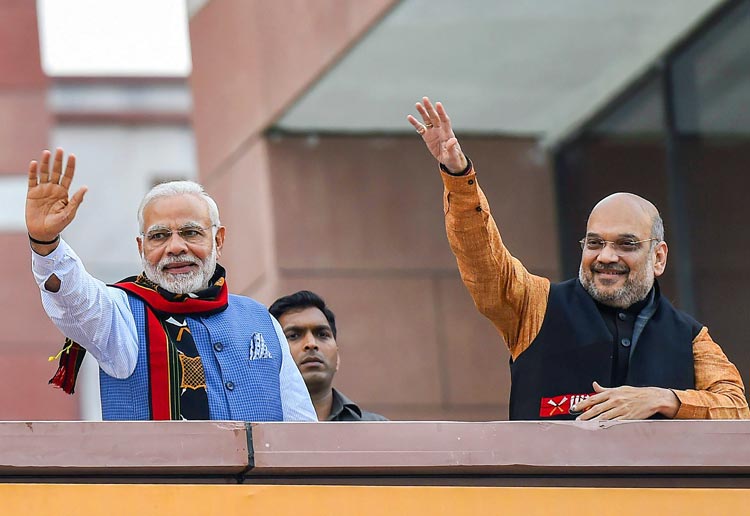 What are we to make of senior BJP leader Yashwant Sinha’s article in the Indian Express on Monday that calls upon stalwarts L.K. Advani and Murli Manohar Joshi to speak up and arrest the current slide in the party?

Sinha is speaking because the slide is before us: In the space of four years, Prime Minister Narendra Modi and his alter ego, Amit Shah, have fundamentally transformed the Bharatiya Janata Party into what one might describe as the Brutalised Janata Party. The events in Unnao and Kathua are the latest symptom of this brutalisation, where party cadres play victim even when they are actually the oppressors.

It’s been a long descent for a party that once took pride in the multiplicity of leaders, inner-party democracy and a committed cadre. Modi and Shah not only nudged Advani away, but cast aside the sense of propriety the BJP traditionally harped on when it spoke of itself as a “party with a difference”.

The arrested Uttar Pradesh BJP MLA, Kuldeep Singh Sengar, accused of raping a minor girl in Unnao, strutted about for days and gave a series of TV interviews. Though the CBI has detained him for questioning, he is still to be suspended from the BJP.

Shah is also unwilling to suspend the two BJP MLAs in Jammu and Kashmir – Chander Prakash Ganga and Lal Singh – who attended a rally in support of those accused of raping and murdering an eight-year-old girl.  Shah did not even ask the two MLAs to resign from Mehbooba Mufti’s council of ministers till matters reached a flashpoint and put the BJP’s alliance with the PDP in danger.

One would have thought that optics matter, even if nothing else does, to a political party. But in the sharply polarised polity that Shah and Modi have created, it is safeguarding bahubalis like Sengar that matters – it sends a message to the UP ‘upper’ castes that the BJP is ready to go to any extent to protect them and ensure a solid vote bank. This is how the party is getting brutalised.

Adityanath is running a “Thakur raj” in UP, where he has surrounded himself with Thakur officials. The other thing which he is doing to consolidate ‘upper’ caste support is the lawless encounter raj he has unleashed, targeting Muslims and ‘lower’ castes.

This is the complete brutalisation of one of the country’s largest states, which sends 80 MPs to the Lok Sabha.

This is Modi and Shah’s version of politics – reduced to a cynical zero sum game in which the only thing that matters is electoral victory. Sengar is a serial party hopper, and like many others was given a ticket by Shah, who has opened up the BJP to all defectors. From Himanta Sarma Biswas, who defected from the Congress in Assam, to cobbling together majorities without numbers in Goa and Manipur, Shah is using the BJP as an instrument to assail rivals by all means.

Worse is the tacit support to the J&K MLAs. It makes the BJP look like a party of rape apologists, but Shah and Modi, who issued an anodyne statement on the two rapes that shook the country, don’t care. So what if the party is brutalised? It furthers the singular aim of the BJP – polarisation at all costs to win votes.

If you speak up for a murdered, gangraped eight-year-old girl, you are a Muslim sympathiser. Tragically, while Modi has not delivered on any of his big promises, he has ensured that all politics in India has now been reduced to a majoritarian endgame. The fact that the girl was raped for days in a temple and that those marching in support of the alleged rapists carried the tricolour does not matter. The Hindutva fringe, helped by the BJP IT cell, is busily indulging in whataboutery on the rape case, highlighting the extent of the brutality that has been normalised by the Modi-Shah duo.

Take the duo’s war cry of a “Congress-mukt Bharat”, a chilling slogan in a democracy in which the opposition – any opposition – has a vital, legitimate role. Even the mothership of the BJP, the RSS, disowned this war cry, with chief Mohan Bhagwat saying that the “Sangh did not believe in it and everyone had a role to play”. Was Shah embarrassed? Not remotely. As his party colleagues in the BJP and Modi’s silent cabinet ministers will testify, both men believe in a dictatorship of two. The rest of the party and government are supposed to be on permanent mute mode.

Shah is so authoritarian that he has ensured that a young leader such as Hardik Patel, who led the Patidar agitation in Gujarat, faces case after case of sedition. Filing charges of sedition or detaining opponents under the National Security Act seems to be Shah’s favourite weapon – as seen in the case of Chandrashekhar, leader of the Bhim Army in UP.

From the body of an accused in Mohammad Akhlaq’s murder being wrapped in the tricolour to the rallies supporting rape accused waving the flag, a uniquely perverse politics is on display. In between, you had Una, where Dalits were beaten in a slow, depraved display of violence, with the attackers filming themselves and putting up the video. In another such display, a man filmed himself murdering a Muslim and mobs come out to rally in his support. These events reaffirm the kind of politics unleashed from the top.

Modi and Shah’s lasting legacy is likely to be a brutalised cadre, shorn of any discipline at the grassroots, as seen in Unnao and Jammu. The duo seems to be bringing out the BJP cadres’ worst prejudices. Leaders can make people rise to be their best selves, but also touch the worst they can be. Modi and Shah have ensured that they bring out the worst in the people and their own party.