For Better or For Worse, the BJP Is Turning to Hindutva (Again)

Despite the fact that the Ayodhya issue no longer arouses sentiments (or votes) like it used to, it seems to be the BJP's go-to trick. 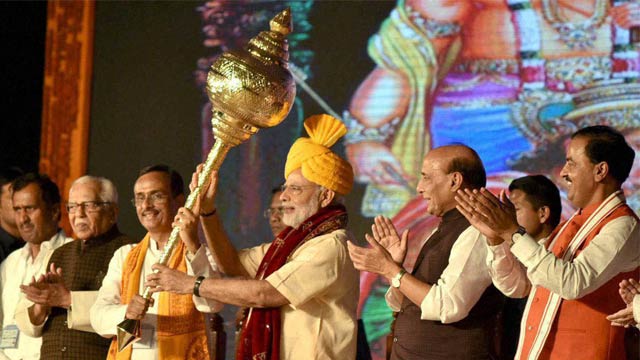 Lucknow: Like a bad coin, it keeps coming back, again and again. And it is not a sheer coincidence that Hindutva finds resonance, particularly at poll time. Now that elections are round the corner in Uttar Pradesh, the saffron brigade is finding ways and means to bring it back to the fore in some form or the other.

It was, therefore, no surprise to now find references by different Bharatiya Janata Party leaders to the much-debated Ram temple in Ayodhya. The reason is not too tough to see. Having tried and tested various other ways to whip up Hindutva passions, BJP rabble-rousers have reverted to what they think may be their trump card – the Ayodhya temple.

Why they continue to see it as a trump card is not entirely clear. Anyone who has been following the temple movement would easily understand how the issue lost its vote-catching potential a long while ago.

Yes, until the Babri Masjid stood there, the Ram temple could be used quite effectively to boil the political cauldron in UP. But once the 16th-century mosque was razed by violent Hindu karsevaks on December 6, 1992 , its political utility has been on the wane.

I can recall how December 6 became “shaurya divas” (victory day) for the entire saffron brigade. Every year, this day would draw some top BJP leaders to Ayodhya to hail their “accomplishment” of 1992 (it was another matter that they always pleaded not guilty when it came to the court case that their act led to). However, barely six years after the demolition, when the then BJP stalwart Lal Krishna Advani descended on Ayodhya’s soil to celebrate ‘shaurya divas’, he could not draw an audience of more than 500-600. There were many more policemen than those who could raise only shrill cries of “Jai Shree Ram”. A visibly chagrined Advani chose not to spend very long in the temple town and flew back shortly after the ritual. What clearly disgusted him was the failure of the organisers to mobilise a few thousand people who could fill up the small venue in Ayodhya – where a couple of thousand saffron clad sadhus can be seen strolling along the lanes and bylanes at any time.

Now, 24 years after the demolition of the mosque and the setting up of a makeshift temple in its place, it must be naïvety on the part of BJP to hope that it would be able to garner votes by reiterating for the umpteenth time its promise to build a grand Ram temple there.

It was, therefore, surprising to find an astute politician like Prime Minister Narendra Modi raking up the temple call at his Dussehra rally in Lucknow earlier this month. He did this by raising cries of “Jai Shri Ram” – the siganture slogan of the Ramjanmabhoomi movement but one that his supporters justified by saying, “What is wrong in saying Jai Shri Ram on a Vijay Dashami evening that marks the elimination of the demon king Ravana by the god of gods Lord Ram?”

In fact, there was plenty that was wrong.

Those who followed Modi during his 2014 Lok Sabha campaign would remember how he skilfully avoided even a remote reference to the Ram temple or to any other connotation of Hindutva. No wonder he could easily endear himself also to those voters who do not subscribe to the BJP-RSS line and therefore do not form part of the BJP’s captive vote bank. And it was they who made all the difference, giving Modi an unprecedented surge.

Sure enough, there can be no dispute over a salutation to Lord Ram, particularly on a day like Dussehra. What the ardent BJP followers did not seem to understand was the subtle distinction between salutation and battle-cry. “Jai Shri Ram” is a battle-cry that was popularised with the Ayodhya temple movement. “Siyapati Ramchandra ki jai” is the traditional salutation of Lord Ram. On this Dussehra evening at the historic Aishbagh Ramlila Maidan in Lucknow, it was the Ayodhya battle cry that Modi raised, not once, not twice, but a good three times until the crowds joined him. It seemed Modi was giving some kind of a green signal to his party cadres to go ahead with their Hindutva agenda in the run up to 2017 state elections in whatever form they wanted. On the face of it, however, he would probably still harp on his “development” agenda, while his official propaganda machinery would go on to dismiss statements issued by the rabble-rousers as not the “party line”.

In a clear-cut departure from the past practice of prime ministers attending Dussehra celebrations in the national capital, Modi’s preference for Lucknow could not be without political motivations. After all, the 2017 UP state assembly election would be no less than some kind of a semi-final before Modi’s ultimate fate is determined in 2019 .

Other than sporadic gains here and there, the temple card and other Hindutva forms might have failed to spring any magic for the BJP in successive elections. In UP, the most recent examples were the by-elections to 11 state assembly and parliamentary seats close on the heels of the 2014 Lok Sabha poll. Despite the landslide victory in 73 out of the Lok Sabha seats, the party lost eight out of the 11 by-elections. And the reason was plain and simple – BJP chief Amit Shah’s decision to entrust the leadership of the by-election campaign to saffron clad Yogi Adityanath, whose instinct took him to communalise the election by raising the pitch on things like “love jihad” and “ghar wapsi.” Even subsequent attempts by other bigwigs in the saffron brigade to play up “beef politics” did not make much headway – thanks to the people of UP who usually do not fall into any trap of the politics of polarisation.

As for the party leadership, they do not seem to have learnt anything from the old saying – Wise men learn from the experience of others, but fools will not learn even from their own.