Buddha Dhan was ushered into the party and given a ticket from the Chakma-majority Tuichawng seat in October. 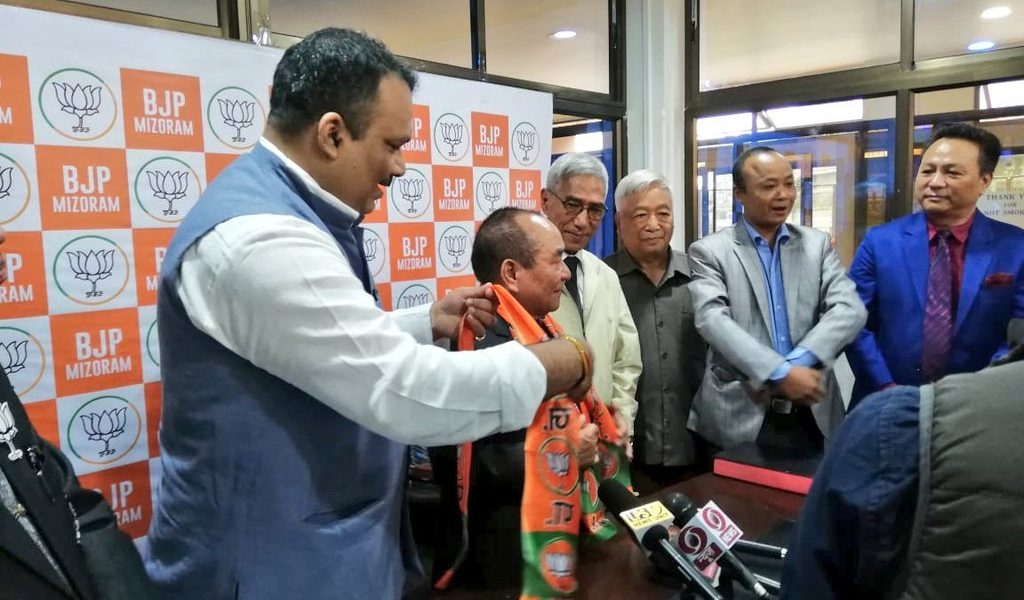 New Delhi: At long last, the Bharatiya Janata Party (BJP) has succeeded in opening its account in the Mizoram assembly. Since 1993, the party had been contesting the state polls but failed to corner any of the 40 seats.

In the November 28 polling though, voters stamped on the electoral symbol of lotus in Tuichawng constituency, electing Buddha Dhan Chakma as the state’s first BJP MLA. Buddha Dhan had won the seat for Congress in the 2013 assembly polls. He quit his party this past August opposing the decision of the Lal Thanhawla government to deny medical seats to four meritorious students belonging to the Chakma community in response to the strong demand for it by the powerful students’ body, Mizo Zirlai Pawl. Buddha Dhan was the only minister from the minority Chakma community in the Pu Hawla government.

In October, carrying forward the BJP’s strategy in the Northeast to co-opt rebel Congress leaders who can win an election for it, Buddha Dhan was ushered into the party and given a ticket from the Chakma-majority Tuichawng seat. Even though there is a strong anti-BJP sentiment in the Christian-majority state, particularly among the Mizos, the Tuichawng seat was expected to go to the BJP only because of Buddha Dhan Chakma as he won the hearts of many in his community for standing up for them and quitting his ministry and the party. The RSS has also been working amongst the Buddhist community for some time now.

This was also for the first time the BJP fielded 39 candidates in the state. In 2013, it contested from 17 seats.

Also read: It’s the End of the Road for Congress’s Lal Thanhawla in Mizoram

Realising that the BJP would have to bank only on the minority votes in Mizoram to enter the assembly, it also tried to win those seats where the Mara community has a say. In October 2017, it also merged into it the Maraland Democratic Front. The front had won a seat in the 2003 and 2008 assembly polls. On November 5, barely less than a month before the polling, the BJP also managed to bring into its fold Hiphei, considered a stalwart of the Mara community. A Congress MLA from Palak, he was a speaker in the last assembly.

Hiphei, contesting the Palak seat on BJP ticket, is, however, trailing behind the Congress and the Mizo National Front (MNF) candidates, as per latest information.

The MNF, the clear winner in these Mizoram polls, is a part of the BJP’s regional platform, North East Democratic Alliance (NEDA). However, the party distanced itself not only from the BJP in the run-up to the polls but also from NEDA. In the last NEDA meeting, held in Guwahati and attended by BJP national president Amit Shah, MNF chief Pu Zoramthanga not only skipped it but also didn’t send any representative from the party.

Also read: Mizoram 2018 Results Are a Repeat of 1998 Assembly Elections

On being asked about it a week before the elections, the MNF chief told The Wire, “NEDA is nothing but a part of NDA, of which we are a part. But in the assembly polls, there is no alliance and we are contesting against the BJP.”

However, BJP’s point man in the Northeast, Himanta Biswa Sarma, who told mediapersons in Aizawl two days before voting that his party “is even open to the Congress to form a government in Mizoram,” did try to take credit for the MNF win on social media on December 11. “With Mizoram constituents of NEDA will head the government in the entire Northeast. We worked towards it tirelessly for the last three years under the leadership of Narendra Modi.”

Meanwhile, the BJP’s state president, J.V. Hulna, not only lost from Tawi but also lost his deposit.