How BJP Held off the Mahagathbandhan in Uttar Pradesh

The saffron party was able to consolidate its base of upper caste Hindus, non-Yadav OBCs and non-Jatav Dalits even further, with its vote share soaring to 50%. 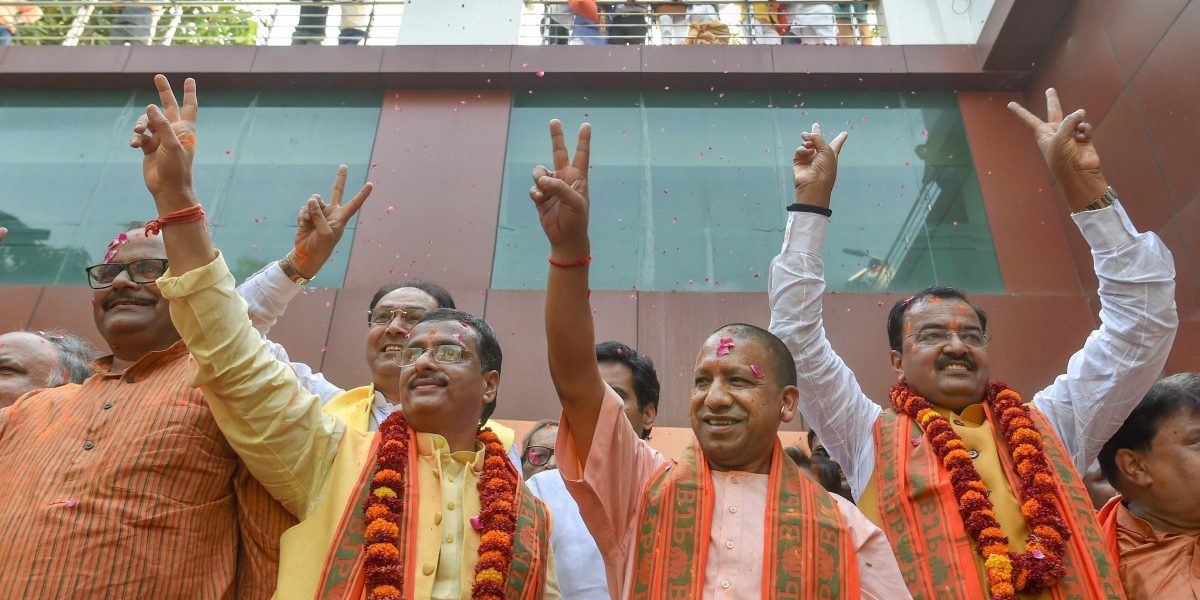 New Delhi: The ‘mahagatbandhan’ between the Bahujan Samaj Party, the Samajwadi Party and Rashtriya Lok Dal in Uttar Pradesh has failed to seriously dent the BJP’s performance in the state. While the party has not repeated its performance of 2014 when it won 72 of the 80 seats in the state, it is leading in 62 seats with around 50% vote share.

When the alliance was formed a year ago, BJP president Amit Shah told the media that it would now fight to secure half the votes in UP. The alliance was expected to get around 40% votes, marginally more than the saffron party’s 2014 figure.

As the results came in, it was clear that the BJP has surged ahead. Its ally Apna Dal is also leading in two seats, taking the NDA figure to 63, at the time of publishing.

The alliance, on the other hand, were leading in 15 seats, with an expected vote share of around 40% at the time of publishing. The Congress, which was fighting alone, could score only Rae Bareli from where Sonia Gandhi contested.

Many heavyweights are on their way to lose. In a shock defeat, Congress president Rahul Gandhi lost to Smriti Irani by a big margin in Amethi. Similarly, Congress’s R.P.N. Singh heads for a big defeat in Kushi Nagar. From the SP’s Yadav family, Dimple Yadav and Dharmendra Yadav are locked in a tight contest.

In Western UP, the BJP looks set to repeat its thumping performance of 2014 and is leading in 11 of the 13 seats in the region at 10 pm. The BSP is leading in Saharanpur and Bijnor. RLSP party chief Ajit Singh is trailing against Sanjeev Balyan by a margin of 6,500 votes.

The BJP’s bigwigs like prime minister Narendra Modi from Varanasi, V.K. Singh from Ghaziabad, Ravi Kishan from Gorakhpur, Mahesh Sharma from Gautam Buddha Nagar, Rajnath Singh from Lucknow are on their way to win by massive margins. The only shock that BJP felt was in Ghazipur where union minister Manoj Sinha is headed for a defeat at the hands of BSP’s Afzal Ansari.

With 80 constituencies, Uttar Pradesh has the most representatives in the Lok Sabha. The state has given the maximum number of prime ministers to the country. Yet, it is one of the most underdeveloped provinces of India.

Over the last few decades, multiple caste groups have been asserting themselves against upper caste hegemony in politics. As a result, political parties have tried to forge strategic caste alliances large enough to get them to power.

A look at the data of the past few elections would indicate that a political party which manages to secure a vote share of anything around 30% is most likely to come to power.

However, in 2014, the Bharatiya Janata Party toppled these political equations and appealed to a large section of the population, comprising multiple non-Yadav OBCs and non-Jatav Dalits along with its upper caste base, to come to power. The saffron party’s vote share was more than 40%. No other party was anywhere close to it.

Its strategy to mix its traditional Hindutva politics that takes aim at minorities and target the dominant OBC group Yadavs represented by the Samajwadi Party (SP) and politically-influential Jatavs or Chamars, represented by the Mayawati-led Bahujan Samaj Party (BSP) worked wonders.
The policy put the BJP at a distinct advantage electorally. By denying Muslims election tickets, the Hindu nationalist party could represent the lower OBCs and Dalits in greater numbers than the other parties. Muslims form almost 19% of the state’s population and usually a political party gives Muslim leaders commensurate candidatures. Since the social justice movements in UP hinged on the question of fair political representation, the less-populous OBC and Dalits felt neglected.

The BJP consolidated these groups and it turned out, that if put together, they were in a great majority.
The saffron party won a whopping 71 seats out of 80 in 2014 with a vote share of 42.30%. With its allies, the NDA posted an unprecedented victory with 73 seats.

Whereas the SP and the BSP finished with a poor figure of five and zero seats respectively, their vote shares were 22.2% and 19.6%.

Riding on a similar strategy, the party also won 312 seats in 403-member assembly in 2017. Adityanath, the Hindutva firebrand leader, was chosen by the party as the chief minister.

For the 2019 elections, the BSP and SP – both arch rivals – decided to come together to defeat this majoritarian alliance. Together, even if they repeat their 2014 performance, the parties will outdo the BJP. The two parties have also roped in the Ajit Singh-led Rashtriya Lok Dal (RLD), which is influential among Jat farmers in western Uttar Pradesh.

With the coming together of SP and BSP, Uttar Pradesh became the harbinger of similar political experiments in other states. However, as the results turned out to be, the BJP upped its game and increased its vote share by almost 10%.