Why is the BJP Being So Mean to Kapil Gujjar, the Shooter of Shaheen Bagh?

Kapil decoded the cryptic Islamophobia in Modi's 'kapdon se pehchanon' message with laser sharp precision. Perhaps he was even more serious about the request made by Amit Shah to give an electric shock to Shaheen Bagh. 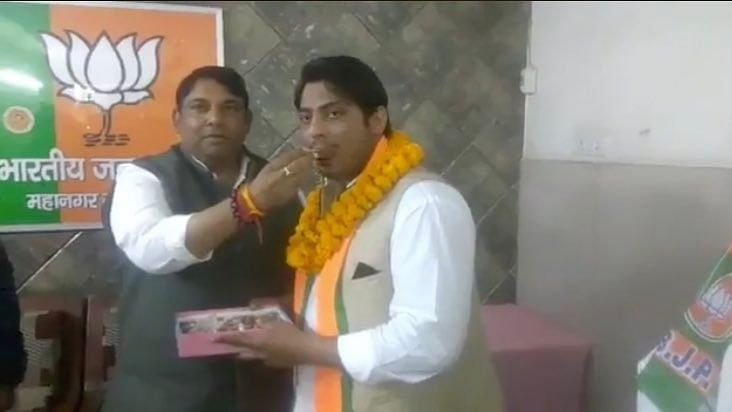 Kapil Gujjar joined joined the BJP, only to be thrown out less than two hours later. Photo courtesy: Twitter/@scribe_prashant

How would you feel if you’re thrown out of class for laboriously doing your homework on time? How can a promising pupil who is only diligently following the instructions of his teachers be charged for indiscipline? How would an employee feel if their boss fires them from the company for merely working hard?

I don’t know about you but my heart would be shattered into a thousand pieces. And perhaps, this is exactly how Kapil Gujjar must be feeling right now too. Kapil did what he felt was his utmost duty as a devoted Hindutva nationalist but the BJP today is spurning him.

During the peak of the protests across India against the Citizenship (Amendment) Act, Kapil, like millions of nationalists, was ordered by Narendra Modi to “identify the rioters by their clothes”. He decoded the cryptic Islamophobia in the prime minister’s message with laser sharp precision.

Perhaps he was even more serious about the request made by home minister Amit Shah to give an ‘electric shock’ to Shaheen Bagh.

When the chief minister of Uttar Pradesh, Yogi Adityanath, talked about “people who understand the language of the bullet,” Kapil knew whom Yogi was referring to.

He spoke to Shaheen Bagh exactly in that language.

From identifying the traitors to finally attempting to eliminate them, there was a crystal clear chain of instructions. And Kapil Gujjar diligently followed these.

Yet the BJP wants nothing to do with him now, at least not openly.

Mishra’s biggest ticket to fame was his hate speech in Maujpur leading to the Delhi riots. Some BJP leaders including BJP MP Gautam Gambhir, Delhi BJP chief Manoj Tiwari and even home minister Amit Shah had criticised Mishra. Yet, Kapil Mishra has grown ten times taller in stature within the Hindutva ecosystem and BJP since the communal riots.

The BJP did not have a face in Delhi to match Kejriwal. For many, Mishra is that face now. It won’t be surprising if he becomes the next chief minister of Delhi. But if those who repeatedly incited young men like Kapil Gujjar to commit violent crimes against minorities continue to hold their offices, then why should the young shooter be penalised for his actions?

Is it because that poor Kapil was a poor marksman, who missed his targets? With some rigorous training, encouragement and incentives, I am sure he will excel.

Also read: There Is No ‘Hindu Terrorism’. but There Is Something Called Sangh Parivar Terrorism

Of course, another reason for his quick ouster may be his involvement in terrorist activities. While people refer to Kapil Gujjar as a shooter, BJP president, J.P. Nadda, called him a terrorist. Nadda had strongly criticised Kejriwal and AAP for inducting “terrorists” in their party after Kapil Gujjar’s pictures with AAP leaders went viral. The Delhi Police claimed that Kapil had links with AAP leaders. But Sadhvi Pragya is also accused of terrorism yet that didn’t make Nadda or the BJP uncomfortable.

So if Pragya Thakur, a person accused of bomb blasts and attacks on minority places of worship, can be made a member of the parliament, why should Kapil not be inducted in the BJP? Also, when the prime minister has clearly said that “Hindus can never commit terrorism”, then how dare Nadda make such accusations in the first place?

It is important to recall that many BJP leaders threatened Shaheen Bagh. Some vowed to repeat the Godhra massacre and even skin Muslims alive.  BJP MP Pravesh Verma had warned that the protestors of Shaheen Bagh will enter the homes of Hindus and rape their women. Kapil had strong reasons to hate and doubt Shaheen Bagh. If his leaders continue to be in power with no legal consequences for their inflammatory speeches against Muslims, why is Kapil being treated like this?

In the one year since he was released on bail, just weeks after the attack, Kapil has become a right-wing social media influencer with an ever-growing following. Interestingly, his “minor” colleague, Rambhakt Gopal, who fired upon Jamia protestors, was also released in a matter of weeks and has since featured in videos of Hindutva extremists justifying the act.

Kapil Gujjar regularly makes videos against “jihadis”. His Facebook page, where he regularly posts Islamophobic videos, is filled with praise for Prime Minister Modi, Amit Shah and Yogi Adityanath. He is a huge fan of the RSS. When Yogi was being attacked for his controversial ‘love jihad’ law, it was men like Kapil who were encouraging Hindus to support such laws by ramping up violent rhetoric. He claims to be a member of Hindu Yuva Vahini, an ultra Hindu organisation founded by Yogi Adityanath.

Today the BJP is claiming to be oblivious of Kapil’s criminal past but it is hard to accept that explanation. The BJP’s relationship with Kapil Gujjar and Rambhakt Gopal is like the relationship between millions of Hindutva ideologues and Gandhi’s assassin, Nathuram Godse. Neither can the affection be revealed publicly nor it can be kept a secret.

While the acts of these individuals are praised, usually behind closed doors, the individuals themselves cannot be publicly endorsed or embraced. In fact, as foot soldiers of a larger cause, these individuals too do not seem to mind it. They live and die for the “Hindu nation and cause”. But surely now is the time when they should be compensated and accepted openly.