With Jyotiraditya Scindia's BJP Entry, What Happens to the MLAs in His Camp?

The rebel Congress MLAs now find themselves at a crossroads. 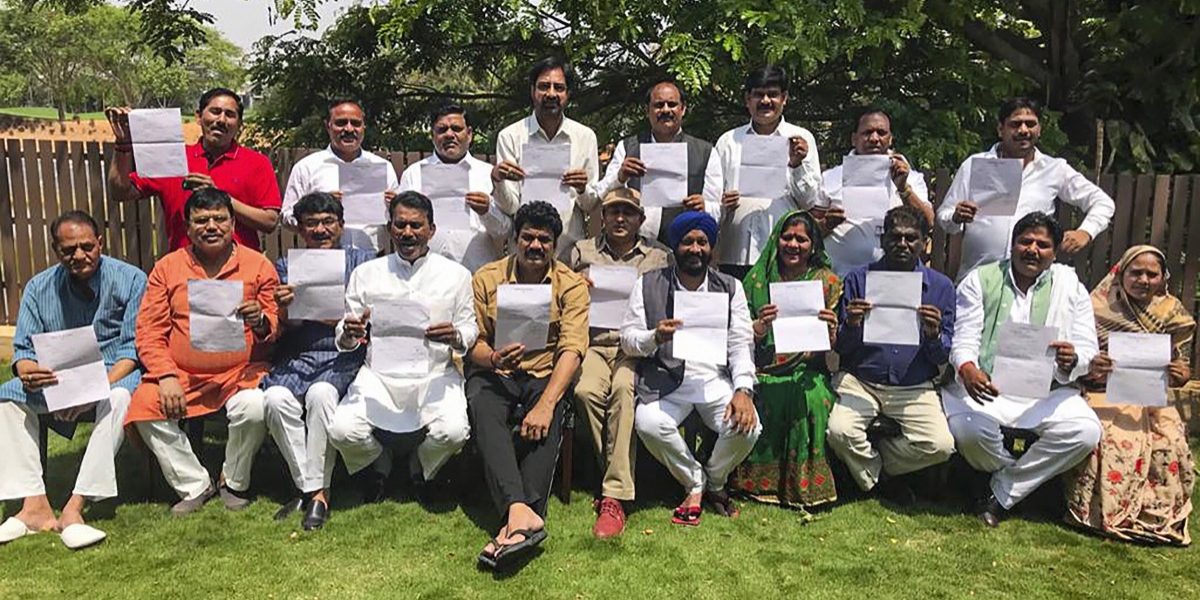 Even as Jyotiraditya Scindia has joined the Bharatiya Janata Party and prepares to ascend the Union cabinet, the 19 who left the Congress party with him suddenly find themselves orphaned in Bangalore (one other rebel MLA remained in Bhopal and has already joined the BJP). There is serious question mark over their political future, as Speaker N.P. Prajapati prepares to grill them on their return.

The Kamal Nath-Digvijay Singh pair has swung into damage control mode and D.K. Shivakumar has taken charge in Bangalore. Some of the Scindia campers have now been spotted in his farmhouse there. Congress MLAs have reportedly been flown to Jaipur, and the BJP has its flock in Gurugram.

But what the speaker may ask the missing MLAs should worry them. The Congress playmakers are reportedly preparing a tough questionnaire for the missing MLAs, who will have to appear in person in Prajapati’s office with their resignations. They may be asked to produce good reasons for their absence along with their resignations, e-mailed copies of which have been submitted to the speaker and governor. It is established procedure of legislature that the speaker satisfy himself about the reasons for resignation, expulsion or disqualification of a member before making a decision.

The “good reasons” include production of air tickets and hotel bills for the period of their absence. These bills should have been paid for with their own cards or bank accounts as proof. Pictures of all 19 MLAs have been flashed from a Bangalore resort and it is believed that three private chartered flights took them there. A passenger list has been acquired by government sources, which also lists one of Scindia’s secretaries as a passenger.

If the MLAs are unable to produce substantial and satisfactory proof of expenses made by them personally, it may then leave room for assuming that they have either been bribed or pressured into giving their resignation. The speaker then will be free to arrive at his own decision, for which he is competent under Article 194 of the constitution.

The Representation of People’s Act under chapter three lists reasons for disqualification of an elected representative of the state legislature, and corruption is one of them. If the MLAs are expelled or disqualified for reasons cited, then they will become ineligible for re-election. In the case of 17 Karnataka MLAs who were disqualified, they had to get relief from the courts.

As time passes, the MLAs holed up in Bangalore are being explained the difficulty of their position by Kamal Nath’s special envoy Sajjan Verma. He has tried to reason with the six ministers that they may not get anything more than what they already have. The others are also at a crossroads. Some of them had fought for 15 years along with the Congress, and with four years of their term still left they seem reluctant to leave suddenly. One of them has been quoted as saying that they had come to Bangalore on the assurance that Scindia would be forming a separate block and not join the BJP. Blocks are good as pressure units, as opposed to leaving a ruling party.

The difficulty for some of them is that they had defeated tall BJP leaders like G.S. Shejwar, who will not let them settle down easily within the party. Thus they will face opposition from within as well as the Congress, leaving all of them now wondering whether it will be worth it. There are others like Govind Singh Rajput, who became ministers after 15 years of struggle and now face the prospect of joining hands with the same people who they opposed like leader of opposition Gopal Bhargava and former finance minister Jayant Malaiya in their own Bundelkhand region.

There is a stream within the Congress which believes that the Nath-Digvijay duo wanted Scindia out and that they have achieved, so for them to accommodate the remaining MLAs will not be a problem. Digvijay probably outguessed Scindia, who could not read Rahul and Sonia’s disenchantment with his politics of entitlement despite having lost an election. The duo also seems to have convinced the Congress high command that the party would be better without him. They in turn have also received a big jolt and chastisement, as they see the simmering anger within the Congress because of their autocratic ways.

The opposition to Scindia has already begun from within the BJP. Former Rajya Sabha MP Prabhat Jha, who hails from Gwalior, has already questioned the logic behind taking in Scindia, who was the main target in the “maharaj vs kisan” narrative that he had built for Shivraj Singh Chouhan in 2009, when Scindia led the Congress charge. Scindia’s aunt Yashodhara, who was a state cabinet minister for ten years, has shown pleasure at his entry but she did not remove her sunglasses – perhaps hiding her worry that she may no longer be useful for the party in north MP, as the original “maharaj” has now landed on this side of the fence.