If the string of defeats for the ruling party is anything to go by, the protest has found support among rural and urban residents.

Chandigarh: “Samajhdar ko to ishara hi kafi hai (A wise man just needs a hint).” This is how Bharatiya Janata Party (BJP)’ Haryana chief minister Manohar Lal Khattar reacted when he was asked during a media briefing last Thursday if the farmers’ protest was responsible for his party’s poor performance in the December 30 verdict on local municipal elections.

Khattar refrained from a direct admission and instead used veiled remarks like viprit paristhitian (adverse circumstances) to blame for his party’s string of recent electoral losses. But the writing is already on the wall.

First, the saffron party lost the Baroda bypoll in Sonipat district in November. Now it has faced a humiliating defeat in the municipal bodies’ election, which does not usually happen with a ruling government, especially during the initial years of being elected, as past trends suggest. The BJP-Jannayak Janata Party (JJP) government in Haryana is just over a year old.

In Haryana, there are direct elections to the post of mayors and presidents of municipal bodies.

Of the seven bodies that went to the polls on December 27, the BJP won just two of the five municipal bodies it contested. Its alliance partner drew a blank in the remaining two bodies. The defeat included losses in two big municipal corporations.

There were close to eight lakh eligible voters in these local bodies, most of them from urban areas which the BJP has often banked upon as its core base.

The results came as a huge setback for the ruling alliance, which did not face any serious political threat on the ground until the farmers’ protest, which was triggered by the BJP central leadership’s decision to pass the contentious farm laws in September.

The current stir that has swayed the masses both in Punjab and Haryana since the president of India gave his assent to the bills on September 27 has clearly changed the political equation in the region. In Punjab, the Shiromani Akali Dal (SAD) was forced to leave the NDA. In Haryana, both the BJP and JJP are reckoning with a series of electoral losses.

Top leaders of the JJP – which mainly draws its political power from the Jat vote bank – made several attempts in the recent past to send across a message that they were with the farmers. Even Khattar made repeated statements that the minimum support price (MSP) regime will continue in his state. But this did not seem to have any impact on the ground. Police action against the protesting farmers has made the situation even more complex for the ruling alliance.

Ever since the farmers of Punjab and Haryana began their morcha against the new agri laws, the Khattar government has booked several farm leaders of the state and has continuously tried to discredit their movement by calling it the handiwork of opposition parties.

Visuals of the Haryana police doing everything they can to prevent farmers from marching towards Delhi in the last week of November are etched permanently in the memories of tens of thousands of people.

More farmers from Haryana have joined the stir after it shifted to the borders of Delhi, which does not make the election results of the Haryana municipal bodies surprising.

The BJP lost the Sonipat’s mayoral post by a whopping margin of 13,817 votes. It faced another humiliating defeat in Ambala, where it lost the mayoral post by over 8,000 votes despite the fact that the city is long considered the party’s hub and is the home town of senior minister Anil Vij. It lost the seat to an independent candidate.

In the Sampla (Rohtak district) municipal body, another independent candidate defeated the BJP nominee by over 4,000 votes.

The only saving grace for the saffron party was in Panchkula’s mayoral post and the president’s post of the Rewari municipal council. In the latter, it won with a thin margin of 2,000 votes.

The JJP, on the other hand, lost the Uklana municipal committee which falls in the Hisar district, where the JJP leaders are believed to have considerable influence. Deputy CM Dushyant Chautala was an MP from Hisar. In Dharuhera, another municipal body in Rewari district, the JJP candidate could only manage to finish in the sixth place.

Though the BJP won more councillors than the opposition parties, this had little value in the bodies where it lost the top post.

Also Read: Questions We Should Be Asking About Food Wastage in the Govt’s Procurement Process

‘Villages and cities have close links in Punjab and Haryana’

Chandigarh-based political commentator, professor Ashutosh Kumar, told The Wire that even the most urban residents of Punjab and Haryana are still deeply connected to their rural roots. For instance, a large number of government employees in Haryana still have landholdings in villages that keep them connected to the rural areas, he said.

He said the trend is similar in Punjab too. Even those Punjabis who have settled on foreign shores do not forget their roots and try to help other residents of their native places. They are even helping to send rations and resources to the farmers who are protesting at the borders of Delhi, which he said can provide a glimpse of their connection to the rural areas.

“Therefore, it is natural that this movement has gone beyond the contours of the rural areas. In that context, the outcome of the election to the municipal bodies in Haryana is not surprising. There is a lot of resentment against the ruling dispensation due to the farm laws and it is reflected in the results of the recently held polls,” added Ashutosh.

Senior journalist Hamir Singh said that this agitation is not just confined to farmers any longer. It has turned into a mass movement, attracting people from both urban and rural areas. Even those who are unable to physically attend the protest are supporting it, he said.

An aerial view of trolleys parked at the Singhu border during the farmers’ protest against the farm laws in New Delhi, December 26, 2020. Photo: PTI

He said the movement’s political fallout was already seen in Punjab, when the Akalis were forced to pull of the NDA. Then, all the parties – barring the BJP – were unified in passing state bills in the assembly to counter the Central laws.

In Haryana, BJP leaders tried raising the Sutlej Yamuna Link (SYL) Canal issue to counter the farm protests, but it did not work.

Hamir Singh believes that the farm protests will mark a departure from the traditional way of politics in the two states. What new trends emerge can only be known in future, but the electoral defeats of BJP provide a hint, he said.

In Punjab too, there are municipal elections in a couple of months before the 2022 assembly polls. These polls will be interesting as the BJP will be in the fray without an alliance, while the Aam Aadmi Party (AAP) has also thrown its hat into the ring. The local municipal polls will be a four cornered fight.

Pressure mounts on JJP, message for Congress as well

While BJP leaders in Punjab as well as Haryana continue to face the wrath of the farmers, pressure is also mounting on the JJP.

The JJP’s vote bank are the Jats, a dominating agrarian community in Haryana. Many members of the community have been asking the party to pull out of the BJP-led government and extend support to the agitation, just like the Akalis did in Punjab.

At least six of the ten JJP MLAs have already expressed support for the on-going farmers’ agitation. They demanded that the three farm laws be withdrawn. But this has failed to convince the farmers of the party’s support to them.

On December 24, ahead of deputy CM Dushyant Chautala’s scheduled visit, a group of farmers dug up a makeshift helipad in Jind. They raised slogans demanding his resignation in support of the farmers’ agitation.

While the Congress party continues to slam the JJP, accusing it of sticking with the BJP for sheer greed of power, JJP state president Nishan Singh told The Wire, “We don’t work as per the whims and fancies of the Congress party. Our top leaders have already made statements in favour of the agitating farmers and have also requested the BJP’s central leadership to take their issues seriously and resolve them on priority.”

He said the current situation is certainly not in the best interest of the nation. He said the farmers have been camped on roads for over a month now and many of them even died due to the cold weather. “Therefore, the government must take this issue seriously and get it resolved at the earliest,” he said

When asked if the JJP will pull out of the government if negotiations fail between the Centre and the farmers, Nishan Singh said, “It is not the case that one can achieve something only by fighting the government. We are already helping the farmers and highlighting their cause while staying within the government.”

The JJP, a party formed by prominent Jat leader Devi Lal’s grandsons, had contested the 2019 assembly polls alone. It formed a post-poll alliance with the saffron party when the latter fell short of the majority mark in the 90-member assembly house.

Meanwhile, there is a message for the Congress party as well in these results. It has to remain united and back the right candidates to stay ahead.

While the Congress secured a major win in Sonipat, where former chief minister Bhupinder Singh Hooda is influential, it lost badly in Ambala and missed a chance in Panchkula as well. Both these fall in the Ambala parliamentary constituency of state party president Kumari Selja. 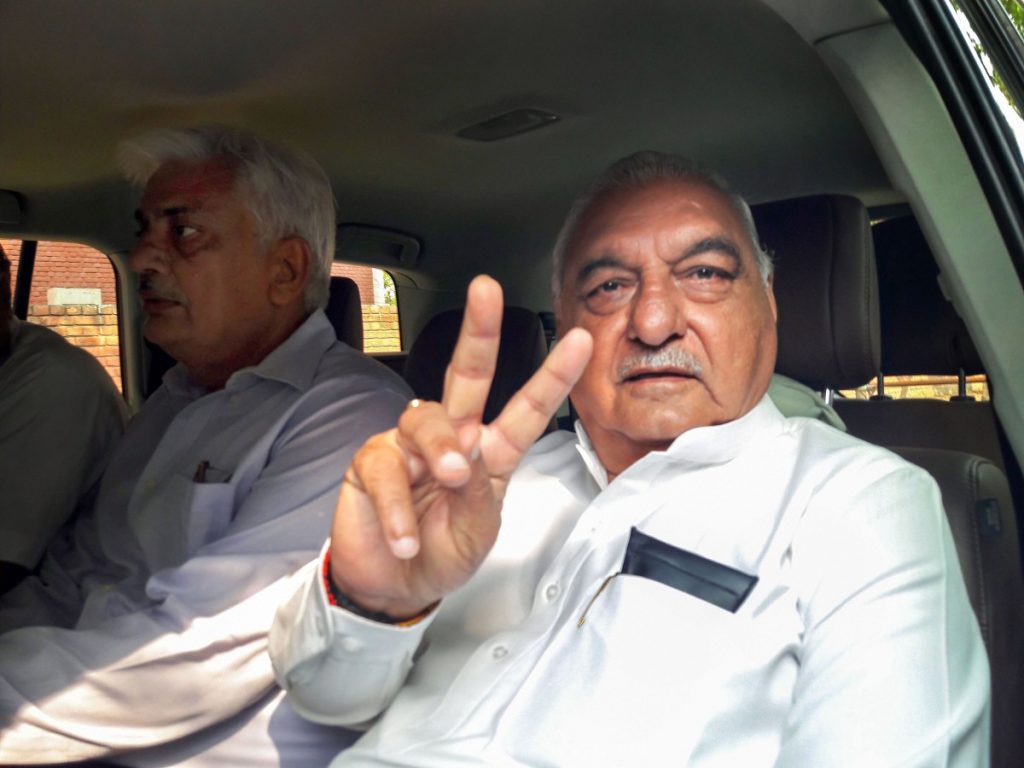 Groupism in the party became evident when Hooda, in a media statement, called for the party to introspect on the defeats in Panchkula and Ambala. His men also claimed that Hooda was not even called for campaigning in these cities.

There is a wide perception among political analysts and reporters that the Congress can do much better in the state if the various camps manage to coordinate and put up a united front.