BJP's Illiberalism Resembles a Ruling Party in an Autocracy: Study

New Delhi: The V-Dem Institute, which analyses the status of democracy across the world, has said in a new report that India’s Bharatiya Janata Party can be clubbed with the Polish Law and Justice Party, Hungarian Fidesz Party and the Turkish Justice and Development Party for its high score on “illiberalism”.

While the BJP has been exhibiting some illiberalism since 1999, the report says, “over the course of the last 20 years, all four parties have become more and more illiberal. By now, they fare close to the typical ruling party in autocracies in terms of illiberalism.”

V-Dem is an independent research institute based at the University of Gothenburg. The study is based on analysis on the ‘Illiberalism Index’, developed by Juan Linz in 1978. “Indicators comprising the Illiberalism Index are low commitment to political pluralism, demonisation of political opponents, disrespect for fundamental minority rights and encouragement of political violence,” the report says.

Using this index, V-Dem has launched the Varieties of Party Identity and Organization Dataset. The study was conducted in January 2020, with 665 experts across 165 countries assessing parties in their own countries that have seen a vote share of more than 5% in a legislative election since 1970.

The V-Dem report is substantiated by a recent research paper authored by Tarunabh Khaitan, professor of public law and theory and the University of Oxford and professor at the Melbourne Law School. In his paper titled ‘Killing a Constitution with a Thousand Cuts: Executive Aggrandizement and Party-state Fusion in India’, Khaitan argues,

“Unlike the assault on democratic norms during India Gandhi’s Emergency in the 1970s, there is little evidence of a direct or full-frontal attack during this period. The Bharatiya Janata Party government’s mode of operation was subtle, indirect, and incremental, but also systemic. Hence, the Article characterizes the phenomenon as “killing a constitution by a thousand cuts.”

The incremental assaults on democratic governance were typically justified by a combination of a managerial rhetoric of efficiency and good governance (made plausible by the undeniable imperfection of our institutions) and a divisive rhetoric of hyper-nationalism (which brands political opponents of the party as traitors of the state). Since its resounding victory in the 2019 general elections, the Modi government appears to have moved into consolidation mode. No longer constrained by the demands of coalition partners, early signs suggest that it may abandon the incrementalist approach for a more direct assault on democratic constitutionalism.”

While the V-Dem report clubbed the BJP with ruling parties in Hungary and Poland, Khaitan also finds some key differences. India has had a longer history of democracy and strong institutions, he argues, which is why the first term of the Narendra Modi regime was not enough to sink the country into complete illiberalism.

To demonstrate the “thousand cuts” to the constitution, Khaitan details all actions of the Modi regime which have “imperilled the continuing operation of liberal democratic constitutionalism”. Slowly, he argues, media, the academy, and other civil society institutions were undermined, and their relative power to the executive diminished. In addition to that, he argues, the BJP government has also reduced the separation between ruling party and government. Khaitan writes,

“This incremental fusion of the party and the state, and the erosion of mechanisms seeking executive accountability were rationalized through a discourse of hyper-nationalism (which equated political opposition to the party with treason), a managerial discourse that promised probity, decisiveness, and efficiency (and painted political opponents as well as checking institutions as corrupt, indecisive, or inefficient), and a welfarist-developmental-populist discourse that characterized procedural requirements as hurdles that got in the way of delivering development to the people.”

The Modi years, according to the professor, differ from the Emergency under Indira Gandhi in a key way – “the subtlety and incrementalism of [the Modi regime’s] assaults” weren’t like Gandhi’s “direct assaults on constitutionalism”. 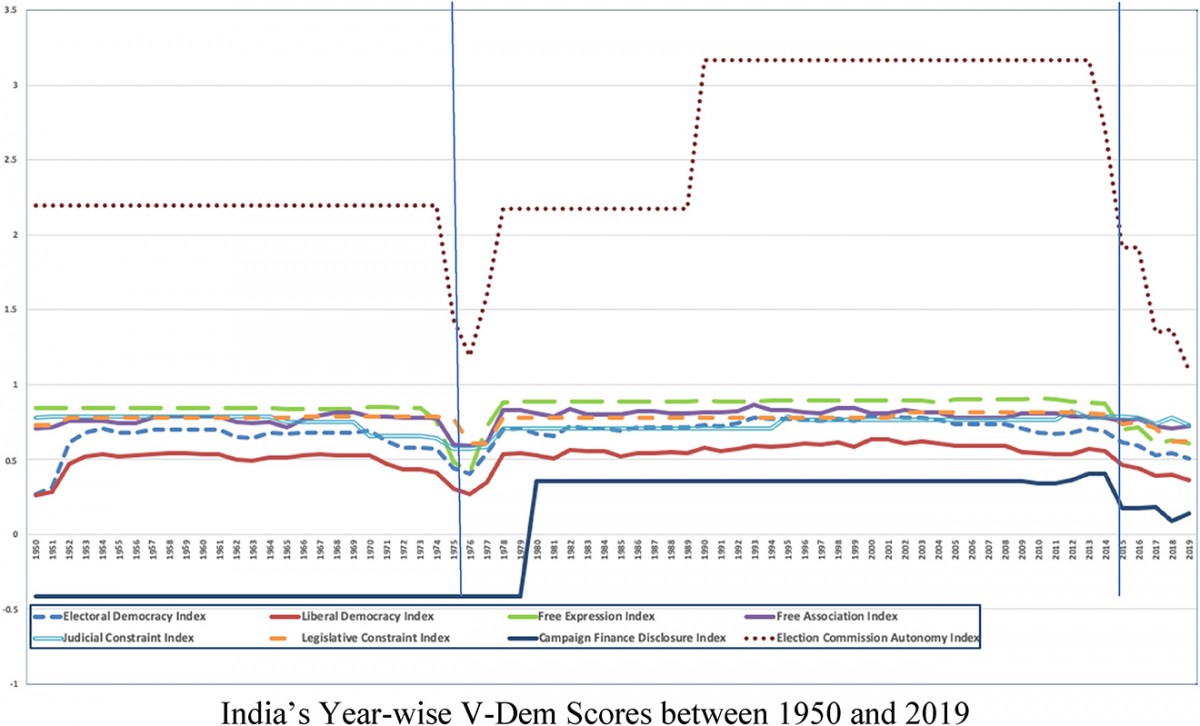 In his detailed analysis, Khaitan breaks down the BJP regime’s “illiberalism” into sub-categories:

1. Attacks on electoral accountability. This includes seeking demographic change (making sure there is an increasing proportion of Hindus rather than Muslims, which the BJP’s ideological parent, the RSS, has made a pet project by raising bogeys such as ‘love jihad‘), changing campaign finance laws (particularly the Foreign Contributions Regulation Act and the electoral bonds system) and advocating for simultaneous elections.

2. Containing the opposition. The BJP regime has weakened the opposition in India in multiple ways, Khaitan argues, including refusing to appoint a leader of opposition in parliament, using money Bills to bypass the Rajya Sabha, ignoring parliamentary debate and opposition views on important laws, attacking federalism using the office of the governor in opposition-ruled states, and sidelining those who don’t toe the official line within the party.

3. Capturing/undermining the judiciary and fourth branch institutions. Not only did the Modi government interfere with judicial independence and appointments (both publicly and allegedly behind the scenes), it also crippled “Information Commission, the Election Commission, the Human Rights Commissions, various equality commissions and so on”.

4. Silencing accountability mechanisms. This includes attacks on university spaces and academics, the targeting of independent media and journalists who speak out, and making work difficult for NGOs and civil society activists who don’t tow the government line.

Khaitan’s work is supported by a number of international groups that have raised concerns about Indian democracy under the Modi regime. V-Dem’s 2020 Democracy Report, for instance, said that India is on the verge of losing its status as a democracy due to the severely shrinking of space for the media, civil society and the opposition.

In addition, in the 2019 Democracy Index released this January, India slipped by 10 ranks to the 51st position – a big downgrade. The report was prepared by the intelligence unit of The Economist Group.