Why the BJP Is Campaigning Aggressively in Hyderabad's Local Body Elections

Energised by a victory in a recent by-poll to an assembly constituency, the saffron party is aiming to expand its footprint in the state. 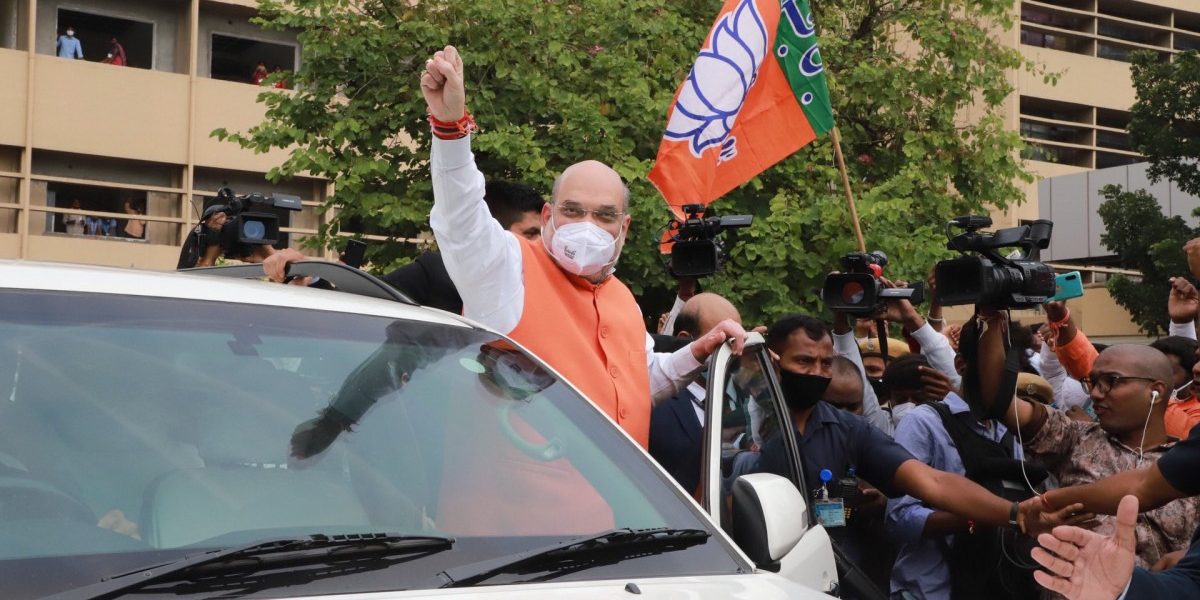 According to Deccan Chronicle Hyderabad resident editor Sriram Karri, never before has this level of campaigning been witnessed in polls to the corporation. “Last time, not even the chief minister K. Chandrashekar Rao (KCR) had campaigned in the election. But because of the BJP’s aggressive campaigning this time around, he has also been forced to hold election rallies,” Karri told The Wire. “Unlike previous municipal polls, the current one is being fought on non-local issues,” he added, explaining how the issues related to local development have become secondary with religious polarisation and the war of words between the parties dominating the poll campaign.

During the campaign, Smriti Irani accused the Telangana Rashtra Samiti (TRS) and the All India Majlis-e-Ittehadul Muslimeen (AIMIM) of “harbouring anti-nationals” in the city to further political gains. She claimed that the KCR government had not alerted the Centre about the alleged presence of around 75,000 undocumented immigrants – the Rohingya from Myanmar, along with Bangladeshis and Pakistanis – in the state’s capital. Later, the BJP’s state president Bandi Sanjay Kumar threatened “surgical strikes to weed out anti-nationals” from Hyderabad’s old city.

Moreover, on Saturday, Yogi Adityanath reportedly said at an election rally, “A few people asked me whether we could rename Hyderabad as Baghyanagar. I said, why not! If Faizabad and Allahabad in Uttar Pradesh can become Ayodhya and Prayagraj respectively, Hyderabad can again become ‘Bhagyanagar’. This election is to make the ‘Bhagya’ (fortune) of Bhagyanagar.” On being asked why the BJP is giving so much importance to a local poll, Karri said, “If they can raise their tally in this election, it will have an impact on future assembly and Lok Sabha elections.” In his understanding, the BJP national leadership believes that the popularity of KCR and his party is declining and with the principal opposition Congress party already weakened, the BJP sees an easy opportunity to make inroads in the state politics and emerge as a major force.

Another Hyderabad-based senior journalist Jinka Nagaraju echoed Karri’s observation. “Telangana has a huge potential for BJP to expand in south India,” Nagaraju told The Wire, adding “they are seeing it as a gateway to South of India, especially Tamil Nadu.”

Currently, the BJP holds only five of the GHMC’s 150 seats. “Even if the BJP is able to win 20-30 seats in this poll, it will be a major victory for the party,” he added, noting that it will force the cadre and leaders from other political parties, especially the Congress, to join the saffron party as there is enough space for them in the BJP.

Experts also believe that since there is an anti-incumbency sentiment against the TRS, many of the anti-government votes are likely to go to BJP. The only exception could be Muslim voters, who even if they are disenchanted with the TRS, are unlikely to vote for the BJP. The Congress will not benefit from the anti-incumbency sentiment because there is an impression – which is true in some sense – that even if a Congress leader is elected, they will end up joining the TRS or the BJP.

Moreover, in the campaign, the BJP has pushed a narrative that the TRS is biased towards the Muslim community. Hence it is likely that outside the Muslim-majority old city (where the AIMIM is likely to retain its base), the TRS will be in a close contest with the BJP. The GHMC is also significant to the state’s politics because under its limits lie 24 of Telangana’s 119 assembly constituencies. According to Karri, what also works in the BJP’s favour is that unlike in other South Indian states, a large number of people in Telangana understand Hindi. Therefore, its star campaigners from North India do not face the language barrier and could aid the BJP’s goal of expansion.

“In the next Lok Sabha polls, if the BJP loses seats in the North of India, it is aiming to compensate that here [in Telangana] and there is huge potential for that,” he told The Wire. “The BJP is using this election to set its agenda for upcoming elections,” he added.

According to senior journalist M. Somasekhar, the GHMC elections are also important because of Hyderabad’s contribution to the state’s revenue. “The city also has a good brand. It is because of these reasons that it is important for any party to be in power in Hyderabad,” he told The Wire. Somasekhar said that it may not be possible for the BJP to come to power this time. “However, even if they are able to win 30-40 seats, it will attract cadre and leaders to the BJP’s fold. This will help solve the party’s lack of local leaders,” he added. The BJP is campaigning on the twin agenda of Hindutva and development, which certainly has a huge potential of attracting voters in the near future, if not today, remarked the senior journalist.

The TRS is the undisputed political force in the state. It not only has the highest number of GHMC seats, but also in the assembly and parliament. The party has 99 members out of the GHMC’s 150 divisions. Hence, as reported by Gali Nagaraja for The Wire, “a setback in this election may also trigger an exodus from the ruling party” and it will directly help the BJP because it is emerging as the alternative to the TRS.

As far as the Asaduddin Owaisi led AIMIM is concerned, experts believe, it does not have much appeal beyond the old city. Most of the party’s victories in the state have been limited to Hyderabad. Meanwhile, the BJP has been energised by its victory in the recently concluded by-election to the Dubbak assembly seat. Both Karri and Nagaraju told The Wire that this has given new life to the saffron party. According to them, it was an important victory because the constituency is located in a very politically significant position—on either side are the constituencies held by CM KCR and his nephew and state finance minister T. Harish Rao. The significance of the victory can also be understood from the fact that even PM Modi called the victory “historical” in a tweet. In the 2018 state assembly election, the party’s candidate in the constituency had finished third with just 13.75% of the votes.

Notably, in that assembly election, the BJP lost four seats of the five seats it had won in the 2014 assembly polls. Karri believes it gave the TRS the impression that the BJP was finished off in the state and it started targeting the Congress, which was the principal opposition. However, in the 2019 Lok Sabha elections, the BJP won four of the 17 seats, three more than it did in 2014. It also greatly improved its vote share.

Among the biggest victory was the defeat of the TRS’s sitting MP Kalvakuntla Kavitha, KCR’s daughter. She was defeated by the BJP candidate Dharmapuri Aravind in Nizamabad, which was considered a safe seat of the TRS. Interestingly, Aravind is the son of D. Srinivas who is a TRS Rajya Sabha MP. He was previously elected multiple times as an MLA from the Congress party.