How Have We Fallen Into the Grip of Bloodlust?

While many factors explain why there are few defenders of 'old India', in the political sphere, the answer lies in the cultural vacuum at the core of the Congress. 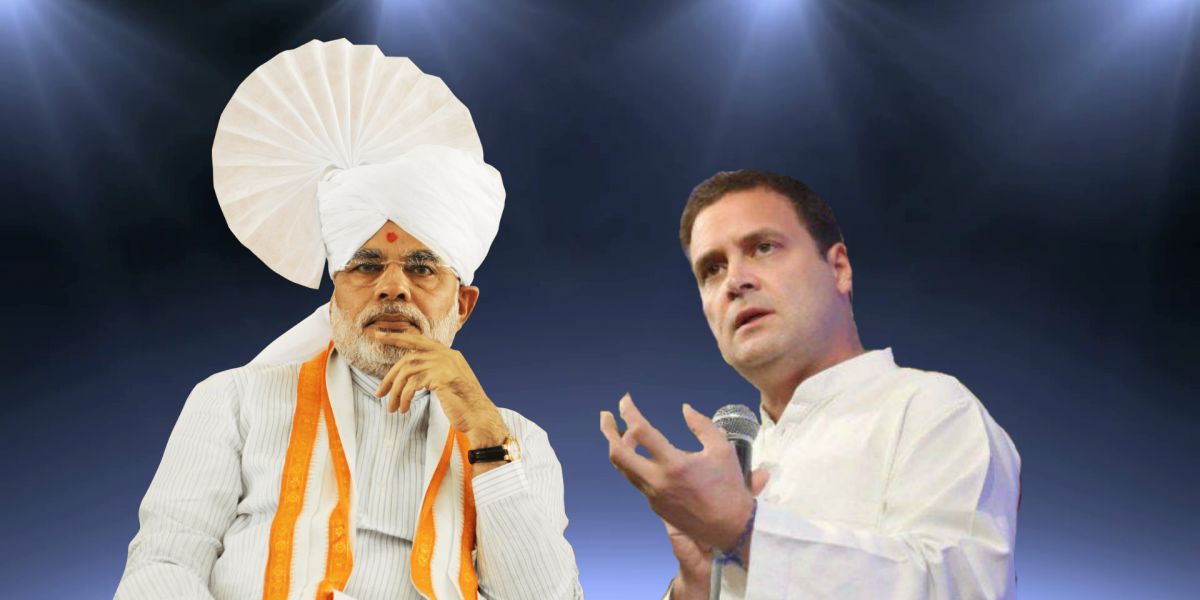 This is the country that produced Mahatma Gandhi, who drove the British out of India without firing a shot at them. But today this same country is in the grip of a bloodlust in which the only issue being discussed ad nauseam is ‘how many terrorists/ Pakistanis did “we” kill in Balakot?’

Nowhere is the new bloodlust more visible than on Indian television, which is being watched abroad with growing horror on YouTube. A report in the Washington Post has summed up its irresponsibility with damning precision:

More than two weeks after the (Pulwama) attack, our analysis finds that no news site had rectified the errors in their reporting, leaving these misleading facts as a matter of public record. Instead, the Indian media has ascribed to itself the role of an amplifier of the government propaganda that took two nuclear states to the brink of war. Many TV newsrooms were transformed into caricatures of military command centers, with anchors assessing military technology and strategy (sometimes incorrectly). Some even dressed for the occasion in combat gear. Speculation and conjecture were repeated ad infinitum, and several journalists even took to Twitter to encourage the Indian army.

If blame can be ascribed to any single individual, it has to be Prime Minister Narendra Modi, who is willing to stop at nothing  to win the next election. But why has the media, which prides itself on being the fourth estate of democracy joined in so enthusiastically? The short answer is that the audience to whom it panders is not the India that has existed for ages, but a new India being created mainly in the urban areas today.

That India and its proponent, the RSS, are products of modernity and the rupture it creates with the past. For this India, religion begins and ends with the robotic performance of ritual, pooja to idols, pilgrimages to Vaishno Devi and Amar Nath, and ‘purifying’ baths during the Kumbh Mela at the confluence of the stinking Ganges and Yamuna rivers that they have not the slightest intention of either reviving or cleaning up.

Also Read: National Ganga Council Headed by Narendra Modi Has Not Met Even Once

This new India is still small. Even in 2014, barely 31% of the electorate voted for Modi. So why are there no defenders of the old India out there? While many factors are responsible, in the political sphere the answer seems to lie in the cultural vacuum at the core of the Congress, the largest party in the opposition. Neither the Congress president nor his advisors have a gut understanding of the core values of Hindu society; its syncretic, accepting, pluralism; its willingness to adapt, live and let live. So they are unable to feel the anger that the degradation of Hinduism, and perversion of its core values by the RSS has created in caste Hindus of the old India, and the fear it has inspired in the Dalits, some of the backward classes and the Muslims.

This emotional vacuum at the top has led the Congress into the trap of trying to compete with the BJP by peddling ‘soft Hinduism’, instead of opposing  the ‘hard Hindutva’ of the RSS, tooth and nail. Before the Gujarat elections, Rahul Gandhi visited temple after temple, came out of them with a teeka on his forehead and proclaimed that “I am a Hindu” in much the same way as a convert to Islam or Christianity would proclaim that he or she is now a Muslim or Christian.

This “soft” Hindutva explains why he was so quick to accept Pakistan’s direct culpability in the attack, why he described it almost sentimentally as “an attack on India’s soul” and,  without prior discussion, committed not only the Congress but the entire opposition to “fully supporting  the government and the security forces” in their actions. By doing this he legitimised in advance every action that Modi has taken against Pakistan.

“Soft Hindutva” also explains many of his subsequent silences and omissions, such as why he did not point out that Pakistan was only indirectly to blame because the suicide bomber was a Kashmiri youth; why he was unable to respond to Modi’s dangerous brinkmanship in launching a pre-emptive attack on a Jaish-e-Mohammad madrassa and training camp  at Balakot, and why he did not immediately condemn Modi’s calculated silence over the expulsion of hundreds of Kashmiris from apartments, rooms and hostels by frenzied mobs across north India.

To the minorities, as well as to the Hindus of the ‘old’ India, this conveyed the disheartening news that for the Congress too, political expediency trumped the rule of law. So why bother to vote for it?

This lack of courage has allowed Modi to turn the tables on the opposition. Whereas it is he who is playing a dangerous game of brinkmanship in a desperate effort to win an election, he was almost certain to lose (with the help of the ever-subservient media), he has been able to portray the opposition as unprincipled, opportunistic politicians who care two hoots about India’s security and standing in South Asia and the world, and are only intent upon ousting the BJP from power at any cost.

As a result, Modi has been able to make a significant part of the population of the country forget, at least for the moment, the collapse of the economy, the crisis in agriculture, the stagnation of industry, the 11 million jobs lost by it over the past five years, and the hollowness of  the grandiose promises he made to them when he came to power. Whether Modi will be able to make their amnesia last till the general elections remains to be seen. But Rahul Gandhi’s silence on this front too is not going to shorten it.

Sadly, this is not the end of India’s misfortune for, having made one major mistake, Rahul Gandhi seems intent on making another, even bigger one. This is not to understand the imperative need to avoid fracturing the anti-BJP vote at any cost. Instead, through his lack of experience and his want of leadership qualities, he is doing the exact opposite: in state after state, he is allowing the shortsightedness and greed of his party rank and file to make him demand far more seats than the Congress’s share of the vote merits, and thereby disrupt the building of a common front against the BJP.

In Delhi, the Congress has flatly refused  to make any seat-sharing agreement with the Aam Admi Party, and has decided to fight all seven seats by itself, despite the fact that it does not stand a snowball in hell’s chance of winning even a single seat, and can only divide the vote in favour of the BJP. This has been made abundantly clear by an opinion poll based on a mammoth 18,750 person sample which shows that while the AAP still holds 52% of the vote, the Congress share is a paltry 5.5%.

Also Read: All Eyes on Rahul Gandhi for Final Decision on Congress-AAP Alliance

In the crucial state of UP, the Congress has already published the names of 11 candidates and intends to fight many more seats in spite of  having won only 2 seats out of 80 in 2014 and commanding barely 11% of the vote. In UP too, whatever little chance the Congress had of cutting into the BJP vote to win some seats has been destroyed by its tame acceptance of Modi’s leadership in dealing with the aftermath of Pulwama. Today, all that the Congress can do is to increase the number of seats that the BJP will win.

As if these setbacks are not enough, relations between the Congress and Tejaswi Yadav’s RJD are also becoming strained in Bihar, if reports in some newspapers are accurate.

Well before the Gujarat assembly election, Arvind Kejriwal made three attempts to contact Rahul Gandhi in order to forge an alliance with the Congress in the state. Kejriwal understood that while the AAP could not win any seats on its own, it did command a sizeable share of the vote in Gujarat. He was therefore willing to put up AAP candidates in seats selected by the Congress, where the AAP had the greatest capacity to cut into the BJP’s vote. Rahul Gandhi did not even bother to reply to his phone calls. So the BJP came back to power by the skin of its teeth, winning 18 seats with a margin of 5,000 or fewer votes and nine with a margin of less than 2,000.

A crisis the Congress doesn’t understand

Today, the Indian nation is facing a crisis whose seriousness almost no one in the Congress party understands (and the few who do dare not to speak). Thanks to Rahul Gandhi’s inexperience and indecisiveness there is now a distinct possibility that the BJP will emerge as the largest single party after the next elections and be able to form a government with allies of one sort or the other.

Should that happen, the dwindling but still substantial number of Kashmiris who want azadi without losing their links with India will lose all hope and start backing those who want to secede from India. India will have lost Kashmir forever. Worse still, a future BJP government’s attempt to hold on to it by force alone, as Modi has done for the past five years, will almost certainly precipitate a war with Pakistan.

In the Indian heartland, democrats and dissidents will be silenced through a wholesale use of repressive laws. Vigilante rule targeting Muslims and Dalits will gather momentum. As faith in the police and the judiciary dwindles, first a few, and then more targeted youth swing to terrorism, just as hundreds, if not thousands, of Kashmiri youth have done in the past five years. The police repression that will inevitably follow will destroy the last vestiges of democracy and the rule of law.

State governments not under BJP rule will not take this lying down. Their attempts to protect their democratic systems will deepen the crisis of federalism. The portents are already visible: Modi has not held a single meeting of the National Development Council since he came to power, and questioned the very need for its existence in January 2015.

The portents are unambiguous: if the BJP of the Modi era (not to be confused with the BJP of the Vajpayee era) is returned to power, it is not only its democracy but its unity, and its syncretic culture that will be in mortal danger.