BJP Comes Out With Manifesto to Create 'Ram Rajya' in Haryana

The opposition has slammed the document as another “jhumla patra”, and asked for a report card on the five years of the Khattar government instead. 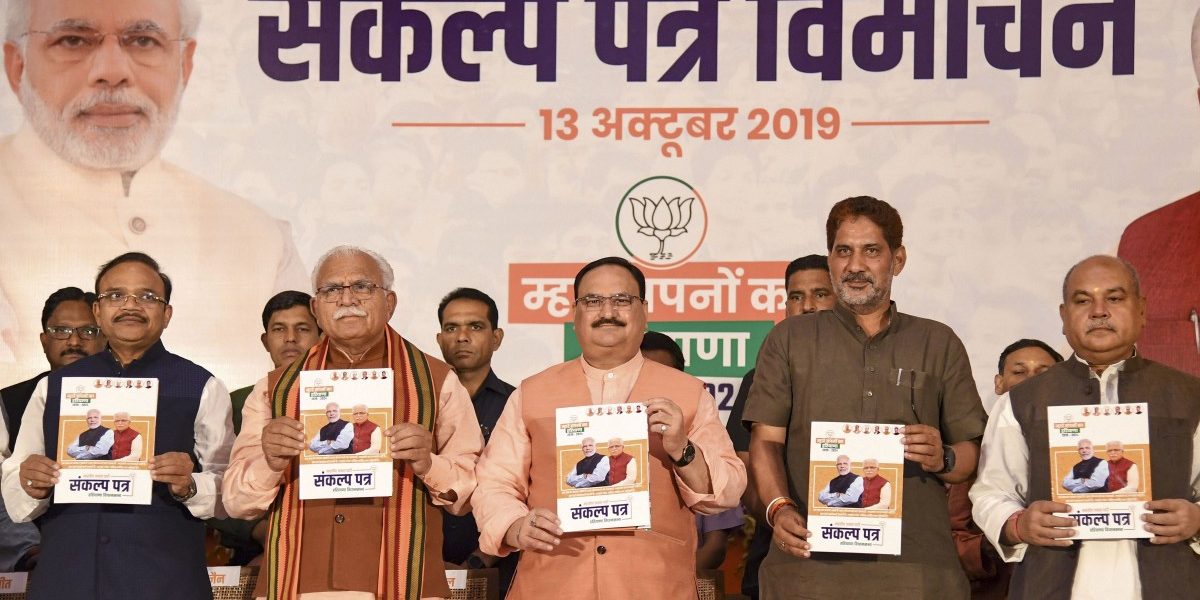 BJP's manifesto for the Haryana elections being released in Chandigarh on Sunday. Photo: PTI

New Delhi: The Bharatiya Janata Party released its manifesto or “Sankalp Patra” for the Haryana elections on Sunday. The ruling Manohar Lal Khattar government has promised, among other things, collateral free loans up to Rs 3 lakh for Scheduled Caste people and an old-age pension of Rs 3,000.

The opposition has been termed the document a “jumla patra” or bag of hollow promises. Opposition parties also demanded that Khattar come out with a report card on his government’s performance.

In its manifesto, released by BJP national working president J.P. Nadda in the presence of Khattar and state unit president Subhash Barala, the party said it would come up with a number of new schemes.

Nadda declared that in its second term, the government’s focus will be on comprehensive healthcare. He said 2,000 health and wellness centres will be set up.

Releasing the manifesto in Chandigarh, Nadda also said, “It is a commitment paper and it is a serious and studied document. A lot of effort has gone into its preparation. This is a pragmatic and practical paper.”

The party said that it was pragmatism that was preventing it from announcing a complete loan waiver for farmers in the state. The party has pledged to provide interest-free crop loans of up to Rs 3 lakh for farmers.

The manifesto, which has 15 chapters and 248 points, has been termed by the BJP as its vision document for “The Haryana of My Dreams”. Khattar said the manifesto is in line with the principles of creating a “Ram rajya”.

The chief minister said his government has kept its past promise of providing an honest government through zero tolerance for corruption and transparency, and that would be the guiding light for the future as well.

Since farmers in the state were upset with the government only procuring a certain amount of crop per acre of land, the BJP has now promised to purchase every crop at the minimum support price. It also announced an outlay of Rs 1,000 crore for the Kisan Kalyan Pradhikaran or farmers’ welfare body.

Since Haryana has earned the dubious distinction of becoming the state with the highest unemployment rate in the country at around 28%, the manifesto also makes promises for promoting industry and providing jobs to the youth.

It states that industries providing more than 95% employment to local people would be provided with special benefits. Also, the BJP has assured that government rates will be strictly enforced in all outsourcing jobs in Haryana. It said it would launch skill development schemes for nearly 25 lakh youth.

Too woo the elderly, the BJP has promised a Rs 3,000 old-age pension and assured them that all other pensions too will be pegged to the annual inflation rate.

With a lot of people complaining that only about 5% of houses promised to the poor have been constructed, the Khattar government has again pledged that it will seek to achieve the target laid down under the Pradhan Mantri Awas Yojana of providing houses to all by 2022.

For women, the manifesto comes with the promise of providing free education to two girls from families whose annual family income is less than Rs 1.8 lakh. A ‘pink bus’ service for female students has also been announced. The BJP said it would also impart self-defence training to students and set up a special centre to help women.

Since the state is known for churning out world-class sportspersons, the BJP has now promised to set up 1,000 khel (sports) nurseries to nurture young talent.

Reacting to the BJP manifesto, state Congress president Kumari Selja said the BJP was making more promises but it has not fulfilled its earlier ones. “Let them come out with a report card on the promises they made during the last Assembly elections, which have still not been fulfilled,” she said.

Selja also described the BJP manifesto as a “jumla patra” and asked, “With what face are they making the new promises?”

Founder of the Jannayak Janata Party, Dushyant Chautala, said the BJP document was nothing but another bag of hollow promises. “They have still not fulfilled as many as 75 promises they made earlier. Many of these promises figure again in the new manifesto,” he charged.