Strong anti-incumbency against the Tarun Gogoi government aside, what the Congress failed to address was the shift of the ethnic Assamese voters from their cultural and linguistic identity to a religion-based one. 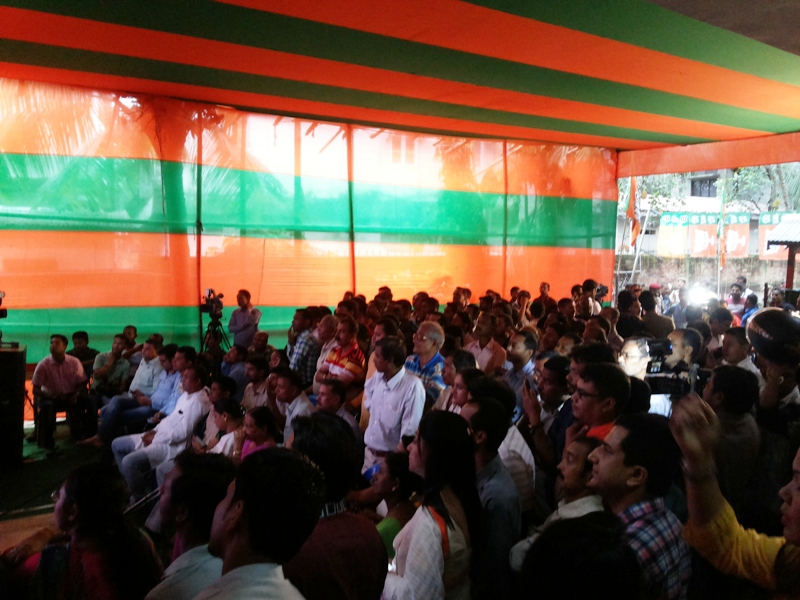 Perhaps this best defines the electoral graph of the 15-year rule of the Tarun Gogoi-headed Congress government in Assam. After gaining a whopping 78 seats in the 2011 assembly polls, the highest in his three terms since 2001, the Congress government saw a defeat that nearly wiped it out of the state. Today’s assembly results in Assam speak of two stories – one of a conquest by the Bharatiya Janata Party (BJP), which even its cadres and leaders are pleasantly surprised by, and the other of a thrashing to a degree that the Congress didn’t envisage.

The reasons for the BJP’s win and the Congress’s loss are a handful. The obvious reason, of course, is the strong anti-incumbency against the Gogoi government, a ready advantage to the BJP. In Indian electoral history, only a handful of chief ministers – Sikkim CM Pawan Singh Chamling, former Tamil Nadu CM M.G. Ramachandran, former West Bengal CM Jyoti Basu and current Odisha and Tripura CMs Naveen Patnaik and Manik Sarkar – have succeeded in pulling it off at the hustings the fourth time. Octogenarian Gogoi will never be in that list.

In 2006 and 2011, anti-incumbency failed to have an impact on the Gogoi government because of what he had delivered to the people – a peaceful state where one could think of venturing out of home after dark without fear. The improved law and order situation also instilled faith in the trader community to do business. Guwahati today is like any other tier-two metro with its share of high-end cars, malls and designer stores frequented by a customer base with a disposable income – a sharp contrast to the Asom Gana Parishad (AGP) rule in the 1990s, for instance, when media and opposition parties accused it of masterminding the secret killings of Assamese boys.

At rallies in the run-up to the elections, Gogoi reminded voters of those “dark days” and the achievements of his government. “Today, Guwahati also has a Marks and Spencer’s store, what more [do] you want?” he asked people in a rally.

In the process, however, he overlooked some overt voter complaints and others so covert that the party didn’t even really engage with them.

The complaints this correspondent heard from many voters across the state included the rising unemployment rate that forced many young people to migrate to other states in search of jobs, the undue power wielded by the party’s office-bearers, the “siphoning off public funds to fill their own coffers”, Gogoi’s failure to give space to the young blood in the party, except his son Gaurav Gogoi, and above all, a general yearning among the public for poriborton in the state leadership.

“Fifteen years, we have chosen the Congress. This time, we should give a chance to others too,” was the refrain heard openly, particularly among the ethnic Assamese voters.

What remained shrouded under the desire for poriborton however, was a firm shift in the identity politics of the state, certainly fuelled by the vexed Bangladeshi immigrant issue and the rising number of Muslims in the state.

“What the Congress failed to see was the strong sense of cultural and linguistic identity of the ethnic Assamese voters making a shift towards a religion-based one. This shift succeeded in separating the immigrant Muslims from the ethnic communities (though it includes the Assamese Muslims) as outsiders but showed a readiness to accept all others as one,” explained Sushanta Talukdar, a Guwahati-based senior journalist and editor of the online news magazine ne.zine.

Soon after winning his seat in Majuli, the BJP’s chief ministerial candidate, Sarbananda Sonowal, said this was not for nothing. “I really like Prime Minister Narendra Modi’s slogan sabka saath, sabka bikaas (participation of all, progress of all). We want to take everybody along with us, all the Assamese people, all tribes, the Marwaris, Muslims, Punjabis, Jains living in the state. We will all work together to make Assam a developed state.”

This religion-based identity fitted well with the “son of the soil” regional politics of both the BJP allies – the AGP and the Bodo People’s Front (BPF). While Sonowal talked about “a second Battle of Sarighat” (where Ahom general Lachit Barphukan defeated Mughal general Mir Jumla in 1671), both AGP and BPF harped on the “outsider” issue in poll campaigns like never before.

The sharp politician that Gogoi is, it will be incorrect to assume that he didn’t notice this shift in the majority of the ethnic Assamese voters. He most certainly did, because of which he not only stayed clear of forging a pre-poll alliance with the All India United Democratic Front (AIUDF) and also accused the party’s chief Badarruddin Ajmal of having “a secret pact” with the BJP, hoping to create a rift in that build-up further fanned by the BJP. The AIUDF is often seen as a party of “Bengali immigrants”. Ajmal’s perennial claim before the elections of becoming the “king maker” in the state helped firm up that shift of identity.

Sensing that it may lead to imminent defeat, Congress made a last ditch effort to forge an alliance with the AGP, a party formed out of the six-year-long anti-Bangladeshi immigrant agitation, but to no avail. A nervous Congress then tried reaching out to the state’s Muslim voters, its traditional voter base prior to formation of the AIUDF in 2004, which pulled a large chunk of this base away from Congress.

Gogoi also hoped Congress’ tribal pockets were intact. By convincing former Congress member of parliament and an influential tea tribe leader Pawan Singh Ghatowar to come out of political wilderness to contest the elections from Moran in upper Assam – where the tea tribe vote is crucial, Gogoi did his best to sew up a “winning strategy”. But that was not to be the case. By then, the BJP’s ideological guide, the Rashtriya Swayamsevak Sangh, made strong inroads into both the tribal belts and the tea tribe areas. So much so that Ghatowar lost in Moran today.

Although the AIUDF succeeded in raising its tally to nine (till the last reports came in), Ajmal met with defeat for the first time. Though Gogoi came up trumps from Titabor, some of his cabinet colleagues and senior Congress leaders had to bite the dust this time.

What came out of this shift in the state’s identity politics was a historic win for the BJP and the first ever elected government in the northeast, and a strong shot in the arm for the Modi government which is rounding off two years this May. Importantly, it has helped the party regain some of the lost prestige in the public eye after the Bihar debacle.

Though many in the national media are giving the credit of this win to party president Amit Shah, any keen observer of the state elections will agree that the real claimants are its National General Secretary Ram Madhav (he visited the state umpteen times) who worked closely with Sonowal (he was easily accepted as a CM candidate by the voters) and above all, the man who took over the electoral chess board of the state – Himanta Biswa Sarma.

Till the last reports came in, the tally in the state stands like this:

As per the latest Election Commission numbers, while the BJP vote share is 29.5%, Congress’ is 31%.