Daniel Langthasa posted a series of images about his father's murder on his Facebook page, questioning the BJP for giving former militants benefits and power.

The first image from the series. Courtesy: Daniel Langthasa/Facebook 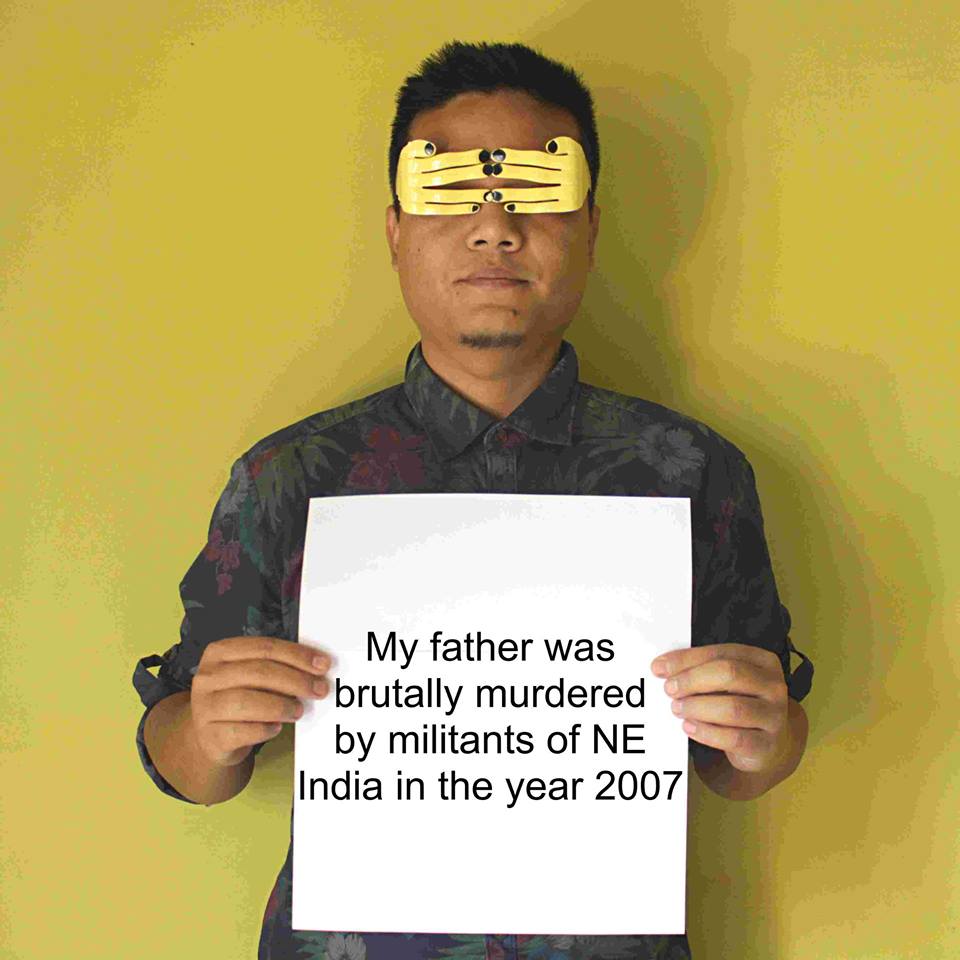 The first image from the series. Courtesy: Daniel Langthasa/Facebook

New Delhi: Far away from the ongoing violent discord over the right to freedom of speech and dissent by students of Delhi University, a young singer from Assam’s Haflong town is facing the ire of the BJP and Akhil Bharatiya Vidyarthi Parishad (ABVP) supporters on social media for “doing a Gurmehar Kaur”.

On February 27, Daniel Langthasa, the lead singer of popular local alternative rock band Digital Suicide, posted a series of images using 13 placards on his Facebook page – similar to what Lady Shri Ram college student Kaur did a year ago – to tell the story of his father, who was “brutally murdered” by militants in the state’s Dima Hasao district in 2007.

“The militants took up arms and were fighting against India!” he said in a placard.

He went on to say that when his father died, he “neither asked for money (meaning compensation) nor a government job” but that “after the militants surrendered, (the) Indian government gave them crores of money”.

“With the money, they bought cars, properties, and set up businesses and funded their political campaigns.”

Trouble for Langthasa began because of what he said in the seventh placard. “Now they have joined BJP and are the RULERS of my district Dima Hasao in Assam.” 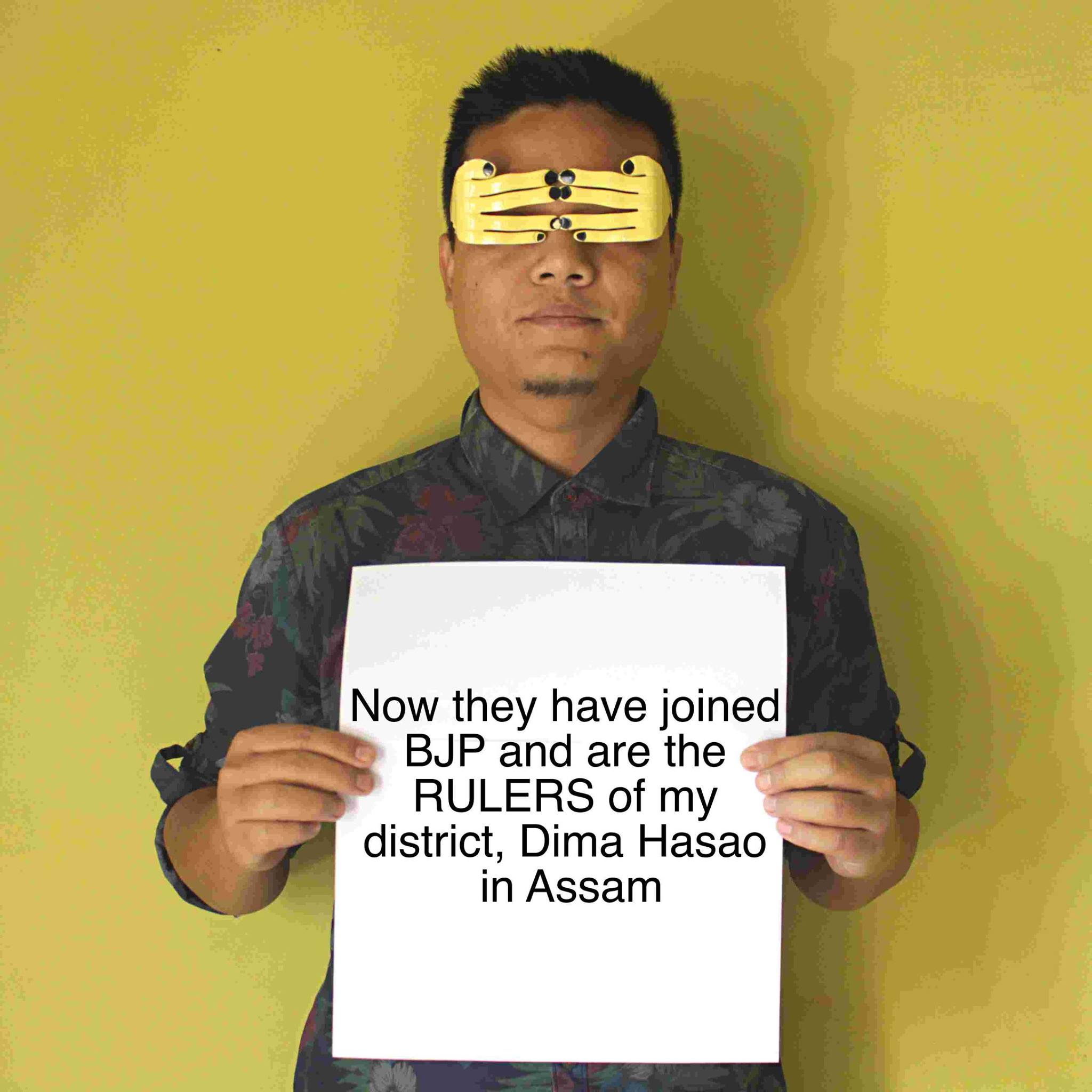 The next placard asked, “Can you please explain this to me Dear BJP and ABVP?”

“My family members, relatives, friends, people of my land are afraid to speak up against your party and its powerful members.”

“They will see this post and most likely ask me to remove it asap.”

“The ‘media’ will not help this post go viral because I’m NOT from Kashmir/DU or a Muslim/Dalit.”

Within an hour of posting the video on social media, Langthasa was heavily trolled. He responded after some time on his Facebook timeline. “Wow! Such a hate-filled world I am living in today that even asking my government for answers and justice for my father’s murder is being trolled and politicized by people whom I don’t even know.”

“May be it is my mistake that after years of being afraid and haunted by the image and nightmares of my father’s bullet ridden cold dead body  and just channeling it out through my music, I decided to muster enough courage only when such a divisive political party is ruling us. It would have been better to blame and ask questions to the Congress and garner support I guess. F… you human beings!”

By late evening, he uploaded another post saying, “It (his father’s murder) has scarred us forever. We smile but we truly never laugh. And yes, am not ashamed to admit that we fight too. We get frustrated. We feel hopeless.”

Langthasa highlighted his trolling by ABVP and BJP supporters in the state by posting an example, which showed different names but the same words, a usual modus operandi followed by paid trolls.

“For people who are not aware or still think that paid trolls of government do not exist, here is a proof that you need. We all need to wake up now,” he wrote on February 28.

Daniel also wrote what he thought of the Congress, which ruled the state for three terms before the BJP took over the reins in May 2016 and also controlled the North Cachar Hills Autonomous District Council that administers Haflong.

“Congress is a corrupt political party with no clear vision for our future. Rahul Gandhi is at best an average stand-up comedian who cannot inspire future generations to do any better in these challenging times. Are you happy now dear BJP supporters who are stuck in the never ending Congress-BJP debate?”

Since October 2015, the Dima Hasao district has been witnessing an ugly power struggle between the Congress and the BJP. Though the Congress won ten seats in the 2013 council and took control of it with the help of six independent members, the BJP – after nine Congress rebels and some independents under the leadership of former militant Niranjan Hojai defected to it – staked claim to form a council led by it. That council lasted for about three and a half months.

In February 2016, the Congress regained power of the council after the defectors returned to the party. However, after the BJP won the May 2016 state assembly polls, the party’s fortune changed in the district. Congress members defected to the BJP again to form a new council.

In the 2013 council elections, Congress won ten seats and the rest were won by independents. The BJP didn’t win a single seat.

Since Langthasa’s post was widely noticed, he has been contacted by local media but he refused to speak to reporters because he felt the media might turn his “concerns into a political party debate.”

Speaking to The Wire from Haflong, Langthasa said, “All I am asking from the BJP, which is in power in our state, district and the Centre, is to introspect about its policy regarding the decision to let former militants become its leaders and not to send a wrong message to the future generation of the country”.

Langthasa’s band, the four-member Digital Suicide, focuses its music around local issues, and also on portraying the angst of the youth caught between militancy and misgovernance. In 2015, in an interview to this correspondent, Langthasa said, “We are only looking for a platform to air opinions” on events happening around them. He said, “We are like most young people in the world today, angry and sad to see things happening around us, which are wrong. Though we sing about life as we see it, our families and friends do not approve. They want us to keep quiet and not ‘offend’ authority; and that bothers us more.”

At the time of publication, Langthasa’s post with the placards was shared over 4,000 times.