With Its Distrust, Alienation and Fear, Akhlaq's Village Provides Glimpse of ‘Hindu Rashtra’

Four years after Mohammad Akhlaq’s lynching, Bisada in Dadri shows no signs of remorse or healing, its Muslim residents resigned to an uncertain fate. 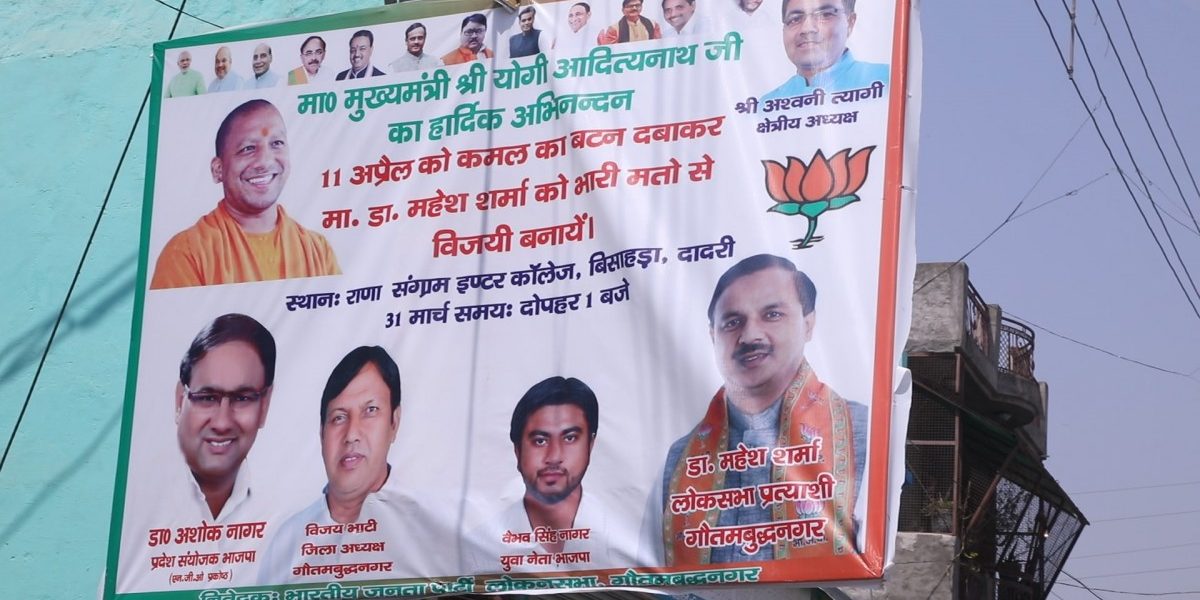 A BJP poster in Bisada. Credit: The Wire

Dadri (UP): “Darr to lagta hai, lekin yahan se kahan jaayenge. Marna to ab bhi hai, tab bhi. Lekin uski raza ke baghair kuch nahi hota.” (We are scared for our lives but where will we go from here? Now or then, death is a certainty. Nothing happens without the approval of almighty).

Hasina Bi (name changed on request) a resident of Bisada village in Greater Noida’s Dadri region, utters these words slowly and calmly, as if she is resigned to a fate she has no control over. Bisada became infamous after 55-year-year-old Mohammad Akhlaq was lynched by a mob in September 2015 over suspicion of cow slaughter. It is almost four years since the incident made national headlines, but the anxiety, fear and mistrust are impossible to miss.

This seemingly developed and prosperous Thakur majority village is about 60 km from the national capital. An impressive welcome gate with a statue of 16th century Rajput king Maharana Pratap leads to the village that has mostly clean cemented roads, pukka houses and numerous shops selling chips and other packaged food items.

The imam of the only mosque in the village says that after the Akhlaq incident, no one would agree to do imaamat (the leading of prayers) here. So he decided to take the plunge and took charge, ‘Khuda ki raah mein’. He does not have the exact number, but says the Akhlaq incident and the fear of the unknown has pushed a lot of Muslims out of the village. They never returned. 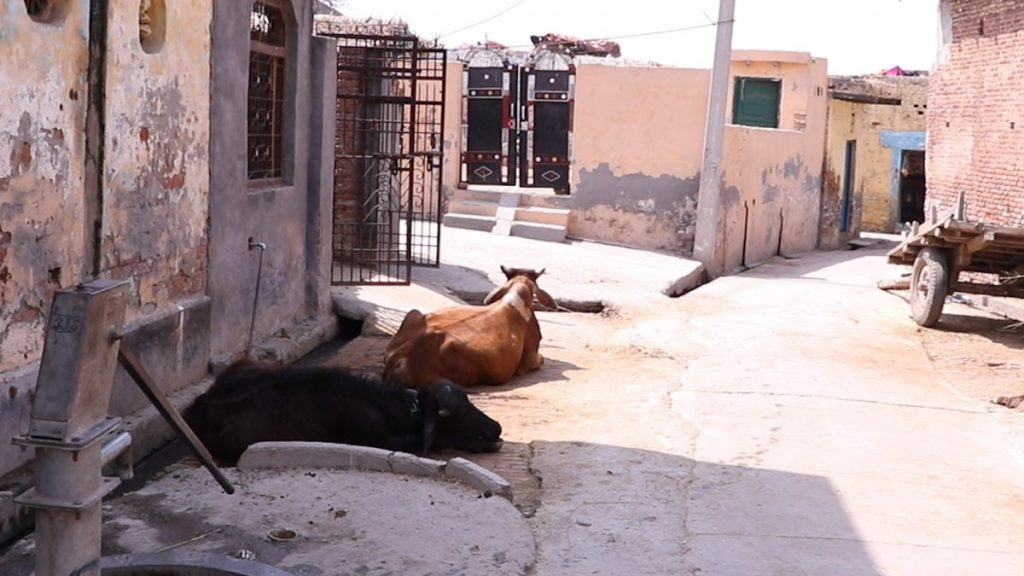 Fear to speak on camera

It is early afternoon and most of the male members from the Muslim community who are landless daily wagers are out working. Hasina Bi, a woman seemingly in her late 50s, is grazing her goats and simultaneously scolding children who are running amok. She does not want to talk on camera, fearing that her statements will be twisted and misinterpreted. She says this has happened in the past. She opens up to a conversation off camera.

Trying to hide her despondency and anxieties behind a pink dupatta, she puts on a brave face, “Darne se kya hoga. Ye hamara desh hai, hamara gaon hai, humen yahan se kaun nikaal sakta hai,” she says. (Fear will not take us anywhere. It is our village, our country and no one can ask us to go from here.)

A mother of three adult sons, she had come to Bisada as a newly married woman more than four decades ago. One of her sons is a tailor, one a daily labourer who works at a nearby construction site and the third one works at a lab. She decided not to educate her children, pandering to the well-established belief that Muslims anyway do not get jobs commensurate with their education. “Humen kaun naukri dega, behen (Who will give us jobs?),” she says, laughing her pain away.

Out of curiosity, other Muslim villagers pass by us and tell us to leave them alone. “Aap log jaaiye, hum apne jahannum mein khush hain.” (You people should leave, we will deal with our suffering.)

The village has around 6,500 voters. Apart from around 35 Muslim families, the majority are Rajputs. While the sense of mistrust and alienation in the members of Muslim community is palpable, BJP leaders and their divisive politics have only deepened the divide and further fanned communal passions here.

Uttar Pradesh chief minister Yogi Adityanath’s recent rally in Bisada village was attended by Vishal Singh, one of the accused in Akhlaq’s lynching. Vishal Singh was seated in the front row, chanting “Yogi, Yogi” along with other youngsters.

Out of the 18 persons arrested in the murder case, 17 are out on bail. The other person died while in jail due to dengue. The villagers draped his coffin in the national tricolour because they believed he was a martyr who protected “Hindu values”. Yogi’s rally and Vishal Singh’s attendance have only scratched old wounds.

The BJP’s politics over the past few years has clearly polarised the Thakur voters in the village who believe Yogi to be a ‘natural leader of the Hindus’ and a ‘gift of God and Maa Bharti’ to them.

Though no one from Akhlaq’s family lives in the village anymore, in our pursuit to understand the mind of the village that is now known because of this slain man, we stop at a confectionery shop owned by a Thakur. “Hamare gaon mein koi hatyara nahi hai, behenji. Sab bahar ke log they. Akhlaq ke saath bohot bura hua. Wo bhi hamara bhai tha.” The shopkeeper, with visible signs of remorse on his face, tries to save the reputation of his village and says whatever happened with Akhlaq was wrong and that his murderers weren’t from the village. 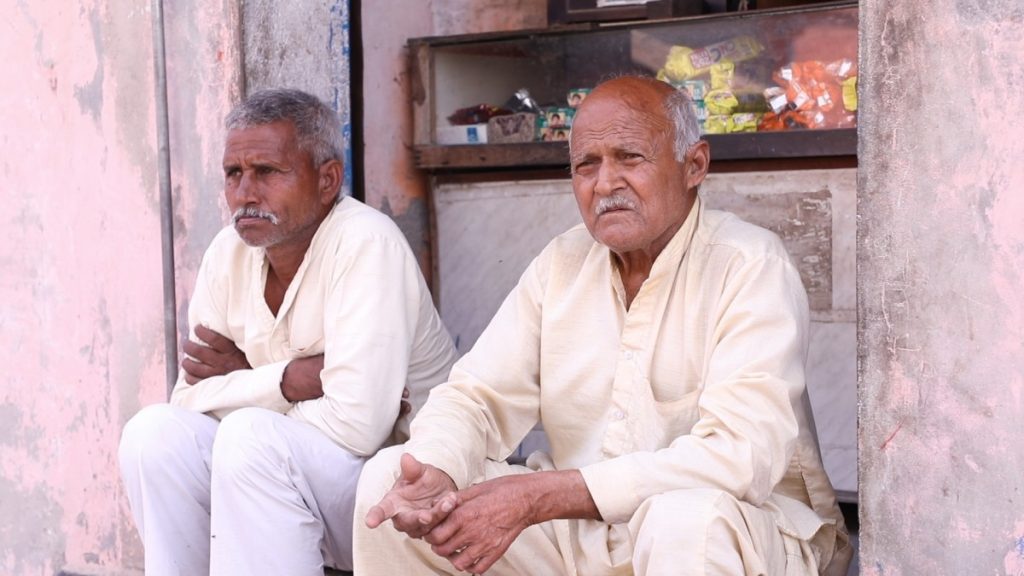 Aggressive assertions of the Thakurs

But his is perhaps a minority view in a village full of aggressive Thakurs, young and old, who thank Modi for “allowing Hindus to stand on their own feet”.

Irrespective of what the facts may be, most of them believe that Akhlaq killed a cow and stored the meat in his refrigerator. But how do you know? Did you read it in the newspaper or watch it on TV? I asked. “Akhbar se kya hota hai? Wo to sab Musalmanon ke khareede huye hain. Isiliye wo hamare baare mein aisi khabren chhapte hain. Sab akhbar aur media Hindu-virodhi hai.” (It does not matter what newspapers publish. They are all bought over by the Muslims and that’s why they are anti-Hindu).

“Was Akhlaq’s murder justified if he had consumed cow-meat?” I probed further. “Qanoon haath mein nahi lena chahiye. Lekin ladkon ka khoon garam hota hai,” the oldest patriarch amongst them said, with an unconvincing tone, that no one should have taken the law into their hands but the “boys” were furious.

A middle-aged man in a white vest and lungi barges into the conversation and says irrespective of religion, everyone has the right to live in India. The people (who killed Akhlaq) came from outside. “Wo sab bahar ke log hain. Kisi bhi dharm ke manne waale log hon, unko Bharat men rehne ka adkhikaar hai.” An older man interrupts him. “Tu kyun itna bol raha hai be? Tujhe kya padi hai? Phir mat ayyio hamare paas. (You are talking too much. Don’t butt in again)”.

The Thakurs are more resentful of the fact that their ‘innocent boys’ were jailed and feel the case has destroyed their families and lives. “Mulayam ki police ne hamare laundon ki zindgi barbaad kar di. Akhilesh sarkar nahi chala rahe they, sarkar to Azam chala raha tha.” They accuse the then Akhilesh Yadav government of unjustly arresting their boys. And that because Akhilesh was under the influence of the Samajwadi Party’s senior leader, Azam Khan, he “took the side of the Muslims”.

While there is no appetite for atonement over what happened to Akhlaq, there is bitterness towards his family for receiving compensation from the government.

“Ab wo yahan kyun rahenge. Unhen rehne ki zuroorat hi kya hai is bejhad gaon mein. Utna nuksaan nahi hua tha, jitna faayeda ho gaya. Hinduon ki suntaa hi kaun hai, sab Musalmanon ki tarafdaari karte hain. (Why should they come back to this village when they have got more than they even lost? No one listens to Hindus, only Muslims get support). 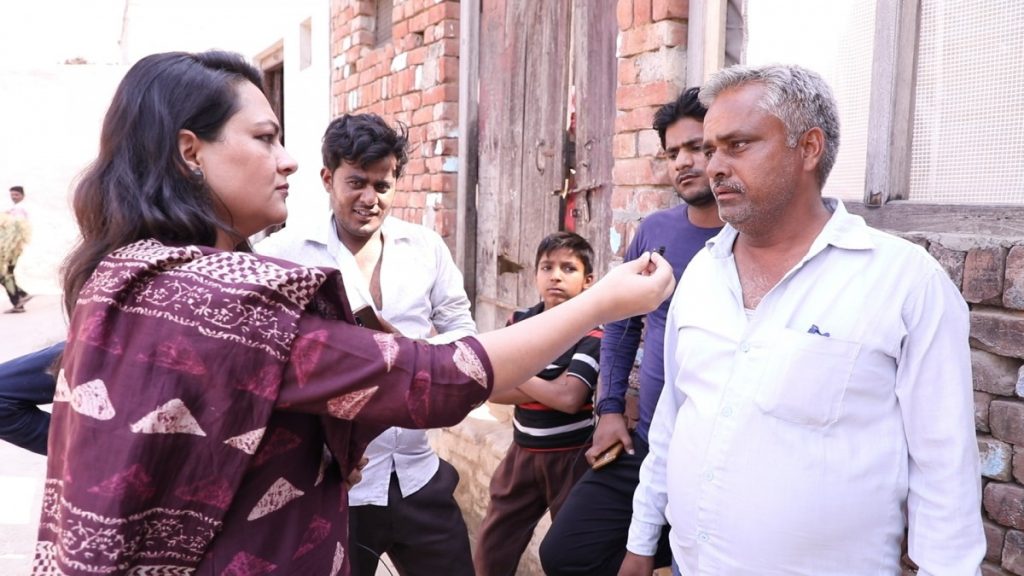 Bisada will go to polls on April 11. The way politics of polarisation has injected communal poison into the veins of this village and its inhabitants, it is evident that their political choice will not be based on their economic or social welfare – issues of bijli, sadak, paan or rozgaar – but on the basis of hatred for the other.

The dominance of the majority upper caste Thakur community, unabashedly supported by the ruling party, and the near total alienation of the minority Muslims living an insecure life, seems shockingly close to the idea of ‘Hindu Rashtra’ that the Sangh parivar has long spoken about.

Irrespective of the outcome of the Lok Sabha elections – in Dadri, or Uttar Pradesh or the whole of India – the village will likely remain under the sway of this project for some time.