Developments in Bihar Have Made Opposition Politics a Lot More Interesting

The BJP has every reason to worry about the seven-party alliance in Bihar. 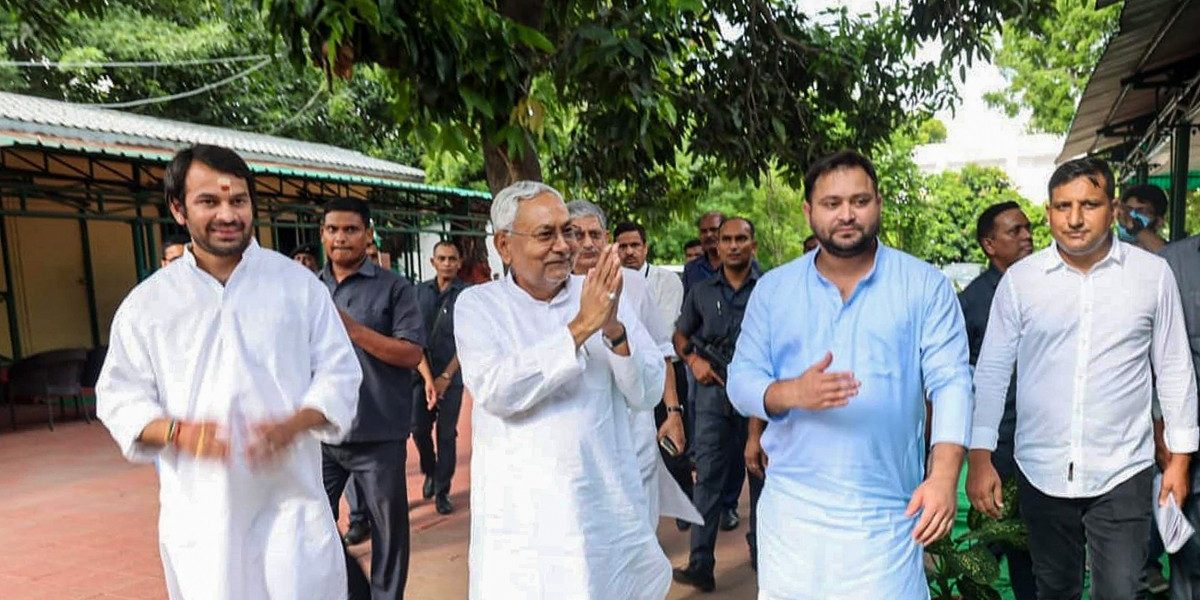 Political developments in Bihar over the last 24 hours have the potential to alter the complexion of national politics in the run-up to the 2024 Lok Sabha polls.

Chief minister Nitish Kumar has made a clean break with the Bharatiya Janata Party and seeks the support of the Rashtriya Janata Dal, Congress and Left to form a new government in the state. The chief minister has sought time with the Bihar governor and is ready to submit letters of support from the RJD and Congress in a bid to form a new government. The numbers are clearly in favour of the new coalition. The Janata Dal (United) has 45 seats while the RJD and Congress have 79 and 19, respectively, taking them well past the half-way mark of 122 seats. Assembly elections are not due again till 2025, which means the new coalition will have three years in power.

Nitish breaking his current alliance with the BJP and returning to the Mahagathbandhan (Great Coalition) is bad news for the BJP, which is still untested in Bihar as a standalone player. The party has always ridden piggyback on Nitish while consistently trying to weaken him. This process gained critical mass in the 2020 Bihar assembly elections when the Lok Janshakti Party, originally part of the JD(U)-BJP alliance, contested most of the seats on its own and hurt Nitish’s JD(U) by reducing its tally in the assembly. The LJP was led by Chirag Paswan but it was widely believed that he was helping BJP’s agenda to weaken Nitish.

Nitish has been nursing the hurt of this betrayal ever since. But the recent resignation from the JD(U) of his close aide and advisor R.C.P. Singh, who hinted at joining the BJP, was the last straw. Nitish saw another Shiv Sena-like split in the JD(U) coming on, engineered by the BJP in Delhi. The canny politician probably read it as an existential crisis and chose to dump the BJP and return to the Mahagathbandhan, which had put up an impressive electoral performance in 2015.

Also read: Why Nitish Kumar Dumped BJP and What It Means for Opposition Parties

From a national perspective, Nitish’s move is interesting because Bihar is very caste-driven and is not under the grip of Hindutva, like Uttar Pradesh. The Mahagathbandhan could easily overwhelm the BJP in Bihar in the 2024 Lok Sabha polls. The gains of the BJP in Maharashtra would be more than neutralised in Bihar in the 2024 polls.

The only condition is that Nitish and Tejashwi Yadav of the RJD must maintain a semblance of unity and administrative harmony until that time. If the desire to defeat the BJP is strong enough, the Mahagathbandhan could prove to be a stable alliance for the next two years.

It seems logical to conclude that this time round, Tejashwi will not upset the apple cart at least till the 2024 Lok Sabha elections. Both Nitish and Tejashwi appear to have developed some understanding over how Bihar politics should play out in the run up to 2024 general elections. Significantly, Tejashwi heaped praise on Nitish’s governance record, which he said even Nitish’s adversaries don’t deny. When asked whether Nitish could emerge as a joint opposition candidate to challenge Modi in 2024, Tejashwi said that is up to Nitishji to decide, but quickly added, “There is little doubt he is the most experienced chief minister in the country and has had a good record of governance.”

Tejashwi made two other well-rehearsed statements. One, Bihar will show the way for a national alternative against Modi in 2024 and two, that the BJP now has no major ally left in the entire Hindi belt. All these utterances, taken together, constitute very meaningful messaging for the 2024 polls. In terms of pure arithmetic, the aggregate vote share of the new seven-party alliance, which Nitish said will work together very closely, adds up to over 50% going by the 2019 Lok Sabha numbers. This seems like an unbeatable combination.

The BJP therefore has every reason to worry about the seven-party alliance in Bihar.

The BJP of course will try every machination in the book to upend the new alliance. The investigation agencies must already be dusting old files which would have been kept for such an occasion. They may find it difficult to accuse Nitish of any major scam because the BJP has also been part of the government.

Besides, Biharis may react much more strongly against the oppressive tactics used by the Centre. Bihar, after all, is not Maharashtra. Opposition politics will certainly become more intense, and intensely interesting.