Bihar Elections: The Inside Story of Chirag Paswan's Rebellion

There is enough reason to believe that even if the LJP does not win a significant number of seats, it will cause sufficient damage to Nitish Kumar's JD(U). 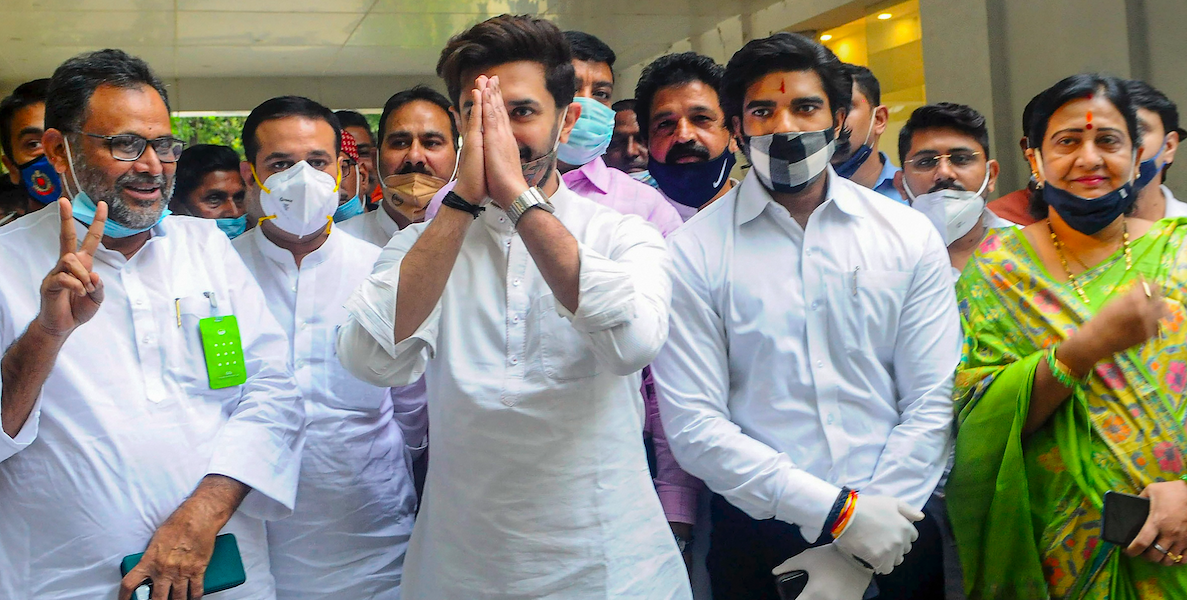 Patna: About two weeks before Bihar goes to the polls, the National Democratic Alliance (NDA) stands fractured, with the perception that the BJP has “propped up” Chirag Paswan to weaken chief minister Nitish Kumar gaining ground.

The Lok Janshakti Party (LJP), headed by Chirag, has already issued the list of its 42 candidates – all against Nitish’s Janata Dal (United) – for the first phase of polling on October 28. The party looks set to field candidates against the JD(U) and its newfound ally, Hindustan Awam Morcha (Secular), or HAM-S, of JitanRam Ram Manjhi for the subsequent phases too.

Chirag might be expecting a wave of sympathy for him in the wake of the death of his charismatic father, Ram Vilas Paswan, particularly from his fellow Paswan caste members. And given that caste sentiment guides the psyche of voters in Bihar, his expectation is not wide of the mark.

It’s not clear how many seats the LJP will actually win with this strategy, but what is known is that the sympathy factor might consolidate the party’s core voter base and cause severe damage to JD(U) candidates in the rural north, south and central Bihar constituencies, where Paswans have a sizeable presence. 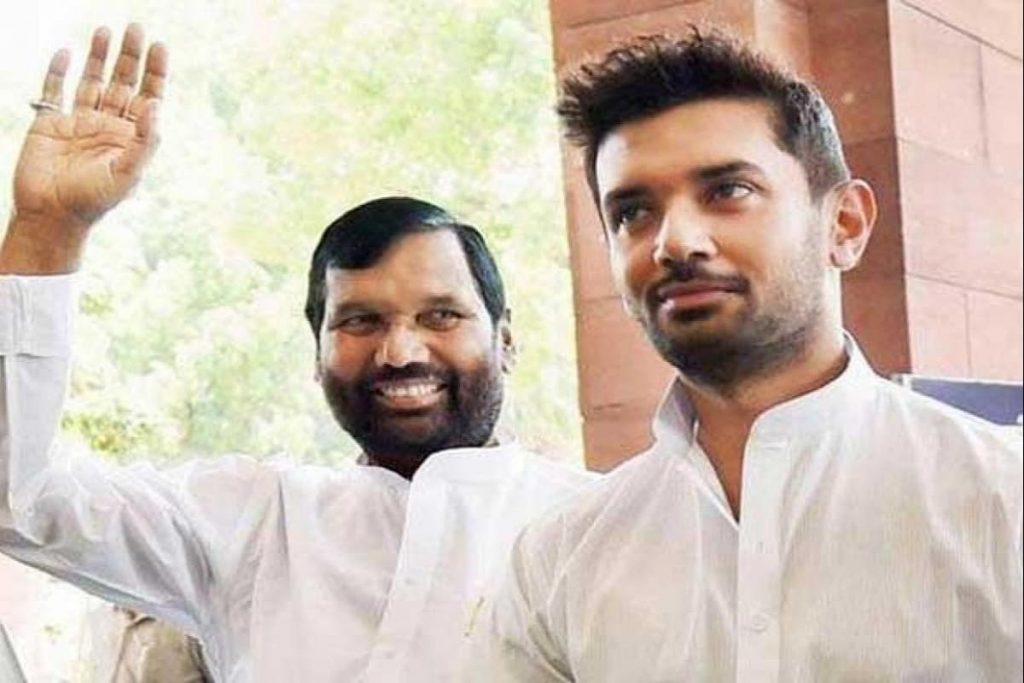 What is Chirag’s game plan?

The question that then arises is if Chirag has decided to play “proxy” to the BJP just to defeat Nitish Kumar. Has Chirag decided to be “used” by the BJP only to weaken Nitish? Why is Chirag gunning for Nitish and what positive vision does he have for his party and its political prospects?

A closer look at these questions reveals that Chirag’s rebellion is rooted more in the manner in which Nitish Kumar has dealt with the LJP in his 15 years of rule in Bihar. Nitish has worked in a Machiavellian way to break the backbone of the LJP ever since he took control of the state in 2005.

While remaining as a minister in the erstwhile UPA government of Manmohan Singh that also included the Rashtriya Janata Dal of Lalu Prasad Yadav, Ram Vilas Paswan fought against Lalu  in the February 2005 Bihar assembly elections. The LJP ended up winning 29 seats, enough to prevent the Rabri Devi government from retaining power, with the RJD getting only 75 MLAs in the 243-seat house. As a minister in the Congress-led UPA, the senior Paswan couldn’t have supported Nitish, who was with the BJP at the time.

It was at this stage that Nitish befriended pharmaceutical baron Mahendra Prasad from Jehanabad, one of the richest men in Bihar. Soon after getting the cash-rich tycoon on his side, Nitish split the LJP and was able to oversee the defection of 22 of its 29 MLAs to the JD(U).

But with reports of “horse trading” doing the rounds due to the February 2005 election results throwing up a hung assembly, the then governor, Buta Singh, recommended the dissolution of the house and the imposition of President’s rule. Fresh elections were held in October/November 2005, when the JD(U)-BJP alliance got 139 seats, securing a simple majority.

Most of the 22 LJP MLAs who switched over contested that election as candidates of the JD(U) and retained their seats. Paswan’s LJP – devoid of many of its formidable candidates – was reduced to just 10 MLAs. Nitish made further inroads in the depleted LJP legislature party, wooing many of them after becoming the chief minister.

After that, Nitish continued to operate in a manner that choked the LJP as a legislature party in Bihar. While at the level of the assembly, he had repeatedly split the LJP, on the ground, he created the “Mahadalit” vote bloc which comprised 2s Dalit castes but not the Paswans.

As chief minister, Nitish formulated policies which gave more benefits to the Mahadalits while leaving out the Paswans. He reserved more local bodies seats for the Mahadalits – empowering them politically – and also gave more financial aid, leaving the Paswans out. In the process, he won over the non-Paswan Dalits, effectively reducing Ram Vilas from a leader of the marginalised sections to the leader of Paswans.

Also Read: Bihar Elections: What the LJP Hopes to Achieve By Walking Out of the NDA

A deft politician with a deep understanding of Nitish’s ways, Paswan went back to befriending Lalu Prasad – the leader he bitterly fought against in 2005 – in the 2009 Lok Sabha elections. Though the RJD-LJP alliance didn’t do well, Ram Vilas understood Nitish’s “game” and had, apparently, calculated that the JD(U) and LJP couldn’t work together.

It is pertinent to note here that Ram Vilas joined the BJP-led NDA in 2014, when Nitish dumped the BJP and eventually joined the Lalu Prasad-led RJD-Congress ‘mahagathbandhan‘ (grand alliance). Paswan’s LJP won six Lok Sabha seats in 2014 and this began the process of rebuilding the LJP.

But trouble emerged once more when Nitish exited the mahagathbandhan and joined hands with the BJP in 2017. The first statement that Nitish’s manager gave after joining hands with the BJP and forming the government was, “Nitish is the leader of the NDA and JD(U) has an alliance with the BJP.” In other words, even as it rejoined  the NDA, Nitish’s party rejected the LJP as a valid component of the alliance.

Touted as the most accomplished weathervane of Indian politics, Ram Vilas understood Nitish’s designs. The ailing and ageing senior Paswan passed on his party’s baton to Chirag, and reportedly “taught” him that it was harmful for his and the LJP’s future to operate in Nitish’s company. After his father’s death, Chirag is following in the footsteps of his father by exiting the NDA but choosing to ally with the BJP. 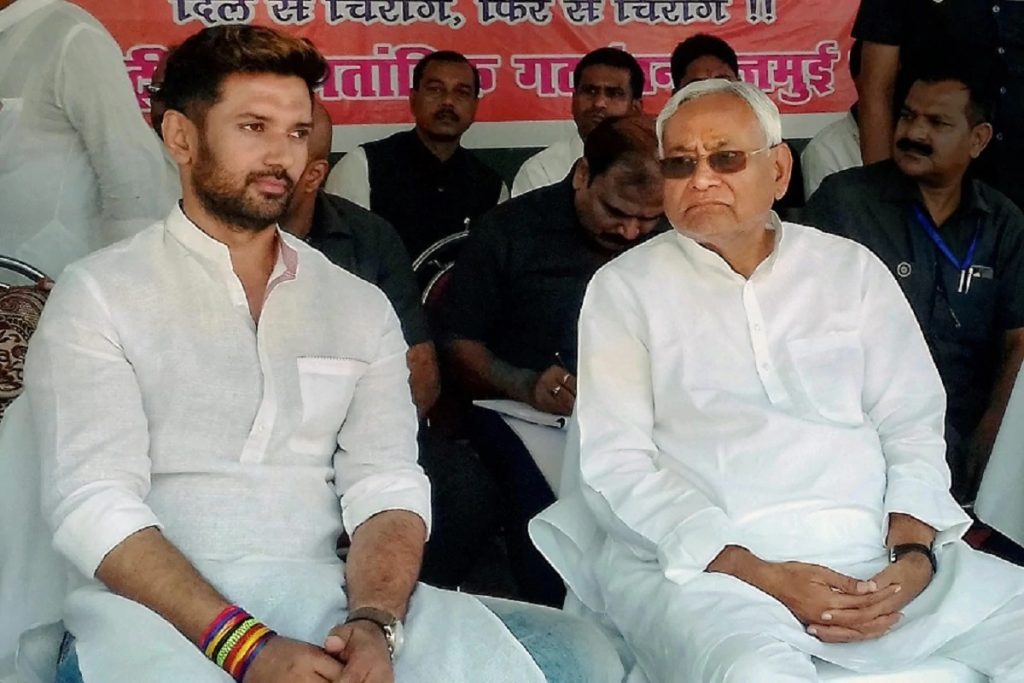 Most analysts agree that the BJP is quite happy to have Chirag feuding with Nitish. It is known to all that the BJP is working to attain eventual control over the politics of Bihar and in the process, it finds in Chirag an effective “foil” for the “egoist” and “crafty” Nitish. And Chirag – guided by the feeling that Nitish has always worked to mitigate the existence of the LJP – has no qualms in weakening the Bihar CM.

In fact, with the weakening of Nitish, Chirag also sees a brighter future for his party in Bihar. The incumbent chief minister has lost the goodwill he had with the masses. His party now depends on Prime Minister Narendra Modi’s popularity for votes.

Also Read: The End of the Road for Nitish Kumar

Nitish seems to have been trapped in his own game now. Reports are doing the rounds that Nitish’s managers – sensing the “foul play” and the threat from “enemies within” – are keeping all options open in the post-poll scenario. Nitish might befriend the Congress again in the event of the 2020 assembly elections throwing a fractured mandate.

While Nitish may believe that he can retain his fort by dumping the BJP again, the fact is that he had re-joined the NDA in 2017 in the wake of the CBI taking over the Rs 2,000 crore Srijan scam. With opposition parties repeatedly alleging that the BJP “uses” the CBI and the Enforcement Directorate to settle scores with political rivals, Nitish  could once again be in the crosshairs of these investigating agencies if he jumps ship.

Nalin Verma is a senior journalist and author of Gopalganj to Raisina—My Political Journey, Lalu Prasad Yadav’s autobiography. He has also authored The Greatest Folk Tales of Bihar.