Bihar: In His Bastion of Raghopur, Tejashwi Yadav Looks Set For an Easy Win

Woes due to the coronavirus lockdown dominate the political conversation in this constituency and many are disappointed at Nitish Kumar's handling of the migrant crisis. Raghopur: For around six months in a year, when the water recedes in the river Ganga, the floating bridges connecting Raghopur – an island surrounded by water from three sides – to the rest of the state are closed. This is the period when people from the region, a large section of whom are daily wagers, use diesel-powered boats to commute to Patna and other adjoining towns.

Yet, the lack of a permanent bridge is barely an electoral issue in the assembly seat which is considered Rashtriya Janata Dal chief Lalu Prasad Yadav’s citadel. Here, unemployment induced by the lockdown and police excesses are the big talking points. The opposition alliance’s chief ministerial face and RJD leader Tejashwi Yadav is seeking his second term as the MLA of Raghopur. A majority of people with whom The Wire spoke to stood firmly in his support.

Although RJD has enjoyed unflinching support from the dominant Yadav community in the region, the lockdown woes have united a cross-section of voters in favour of the opposition alliance.

“Coronavirus has induced such miseries in Raghopur that I can’t describe them. For the past five months or so, people have not found work. A few who have land for cultivation somehow got by. The rest had to make do with whatever little they found,” said Ravi Kumar, a resident of Rustampur village in Raghopur.

Bighan Rai, a boatman who belongs to the Yadav community, had a similar tale to narrate. “For these five months, when the bridges are closed, boats are the only means of transport. But the lockdown completely destroyed us. There were hardly any passengers after the lockdown was imposed. Now when we find passengers, many of them are not in a position to pay for the rides (each ride costs Rs 5).”

Around 40 boats operate between Raghopur and Kacchi Dargah, the other side of the river Ganga, from where people take buses or auto rickshaws to Patna, the nearest big city. Most who commute are daily wagers who go around Patna looking for work. The lockdown impacted this economy severely, and it is still in the process of recovery. 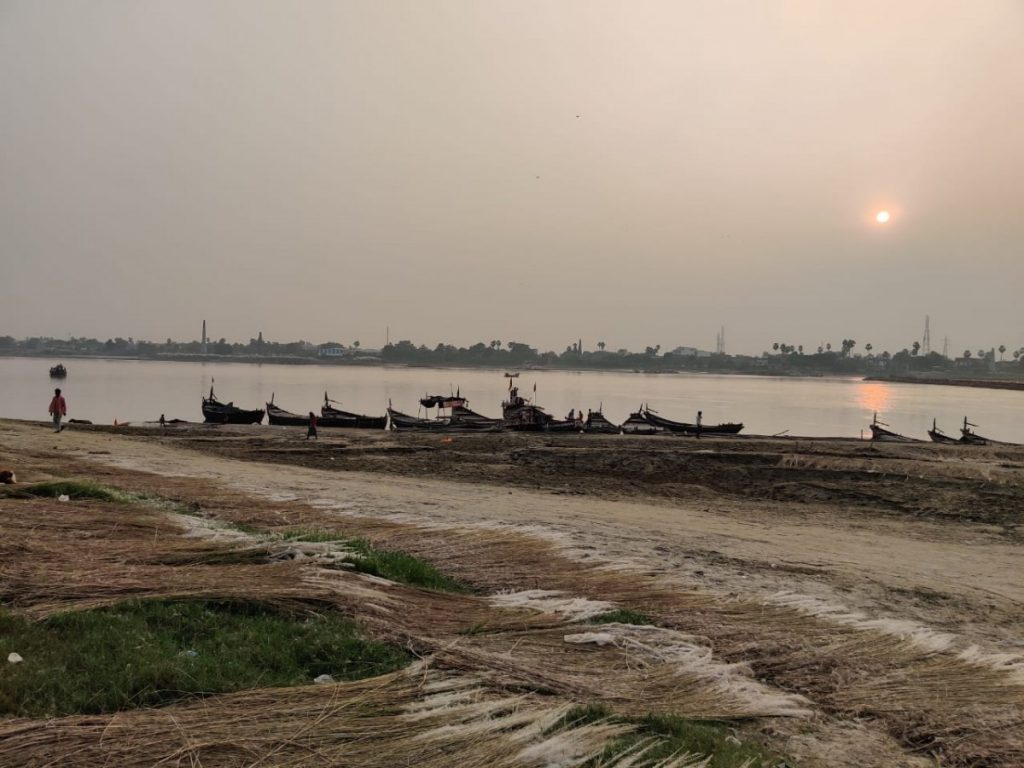 Boats which people use to travel across the Ganga in Raghopur. Photo: Ajoy Ashirwad Mahaprashasta/The Wire

“Nitishji (chief minister Nitish Kumar) says that his government is powered by a ‘double engine’ with Modiji (Prime Minister Narendra Modi) actively aiding him from the Centre. But all they have done is impede normal life. Kabhi note band, kabhi balu band, kabhi corona band. Gareeb aadmi ismein jyada na mar raha hai! (This government bans notes, sand mining, and now lockdown. The poor are only dying in this),” said Gautam, a labourer who goes to Patna daily to find some construction work.

On top of it, people complained that despite the chief minister’s assurances, very few people in Raghopur got the relief promised by the state government during the lockdown.

“Nitish said that everyone, irrespective of whether the person has a ration card or not, will get groceries during the lockdown. Only a selective few got that relief. The Rs 6000 relief that the state government promised also was not distributed properly. How are we supposed to live if we are not allowed to work,” said another resident of Raghopur.

“We had no hope from the BJP. It is a party of the rich. If you campaign for the BJP here, people will abuse you. However, we thought Nitish would understand the troubles we faced. But he betrayed us. We want the RJD to win and form the next government,” said Shiv, who runs a breakfast cart in Raghopur and belongs to the economically backward class (EBC) Teli community, which is generally seen as favouring Nitish Kumar’s Janata Dal (United) in the past few elections.

“I sell chowmein (noodles) and samosas in my cart. Once the lockdown was eased, I started selling again. The police came and beat me up, and vandalised my cart. This has happened with many of us who depend on daily earnings. At the same time, you see the police actively collaborating with people who sell liquor illegally or contractors who take up big projects. We had hoped that the poor would not be insulted so much in Nitish’s government,” he added.

He goes on to say, “At least during Laluji (Lalu Prasad Yadav)’s government, we got Rs 1,000 and one sack of grain when floods hit Raghopur annually.” 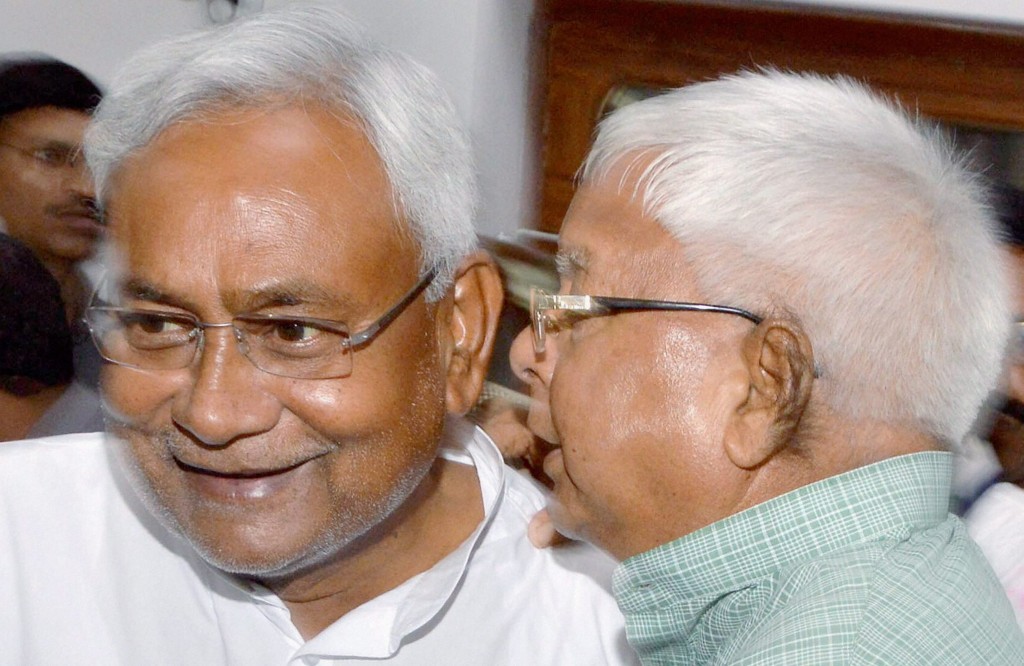 Nitish Kumar and Lalu Prasad in Patna in 2015. Photo: PTI/File

An elderly resident said the pandemic is a “saazish” (conspiracy) to impoverish those who are already struggling to earn a decent living. “All of you are wearing masks. Sabko Budbak bana diya. Gareeb ko aur gareebi mein dhakel dene ke liye aaya hai coronavirus .Khaney ka paisa nahin hai, magar ghar pe rahen ko kaha ja raha hai (The government has made a fool out of you all. Coronavirus came to push the poor into further penury. We don’t have food to eat but we are being asked to stay at home),” he told this correspondent.

Tejashwi will perhaps have an easy win from this Yadav bastion, as support for him has also grown among different communities of the constituency. The constituency has elected his father Lalu Prasad Yadav twice in 1995 and 2000 polls, and then chose his mother Rabri Devi in 2005. Satish Kumar Yadav, who is contesting on a BJP ticket against Tejashwi in these polls, won the seat as a Janata Dal (United) candidate in 2010. The contest has become easier for Tejashwi as Chirag Paswan’s Lok Janshakti Party has fielded Rakesh Roshan, a Rajput who was previously with the BJP. He is expected to gain a section of upper caste votes, which are considered to be the primary vote bank of the saffron party.

Although the Yadavs are the most vocal community in its support to the opposition alliance, or the Mahagathbandhan – comprising RJD, Congress, and the Left parties, the poor across communities believe that Tejashwi would be a better chief minister than Nitish Kumar.

“People say that Tejashwi is inexperienced. We say that his inexperience is better than Nitish Kumar’s experience, which did nothing for us. Instead of helping us, he put barriers in the state borders to prevent our sons and daughters from coming back to their homes,” Ramlal, a tea shop owner, said while referring to Nitish Kumar’s initial suggestions that migrant workers from the state who were walking from cities like New Delhi and Mumbai should not be allowed into the state during the lockdown. 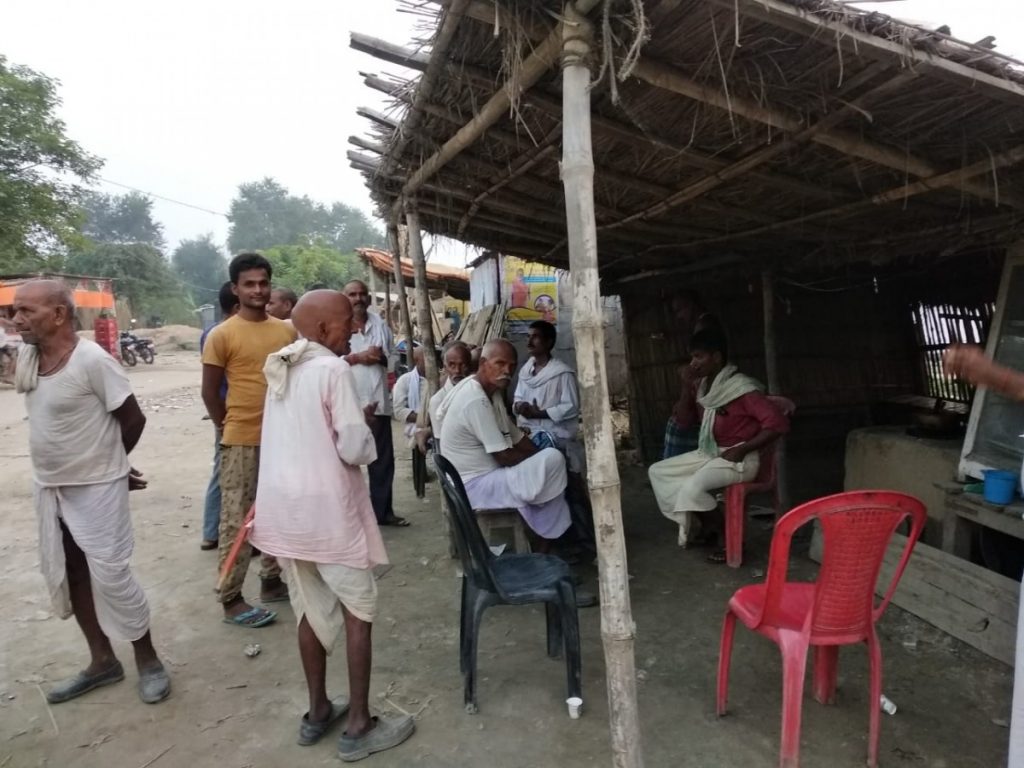 “Kahan jayega hamara baccha sab. Apna hi ghar aayega na jab shahar mein kaam nahin hai! (Where should our children have gone. Wouldn’t they come to their homes if they don’t have work in cities!)” another person interrupted in the middle of the conversation.

Nitish’s alleged mishandling of the migrant worker crisis during the lockdown came in for bitter criticism from the Raghopur residents. This appears to be helping Tejashwi in his electoral fight.

“The floating bridges that you see were sanctioned by Lalu and his family only. The only means of transport were boats before. Now we can at least take the bridge for six months.”

“But a permanent bridge is not our primary concern. We are comfortable taking boats. Boats are the source of living for some people. All we want to say is that if Tejashwi becomes the chief minister, he should find ways to generate jobs here. We need a few factories here. So many educated people are sitting at home without jobs. They should be his first priority,” Ramlal said.

Not for nothing, the Mahagathbandhan’s twin slogans for the elections are rozgaar (employment) and shiksha (education).