In Harnaut and Barh, cracks in the JD(U)'s support base are visible. 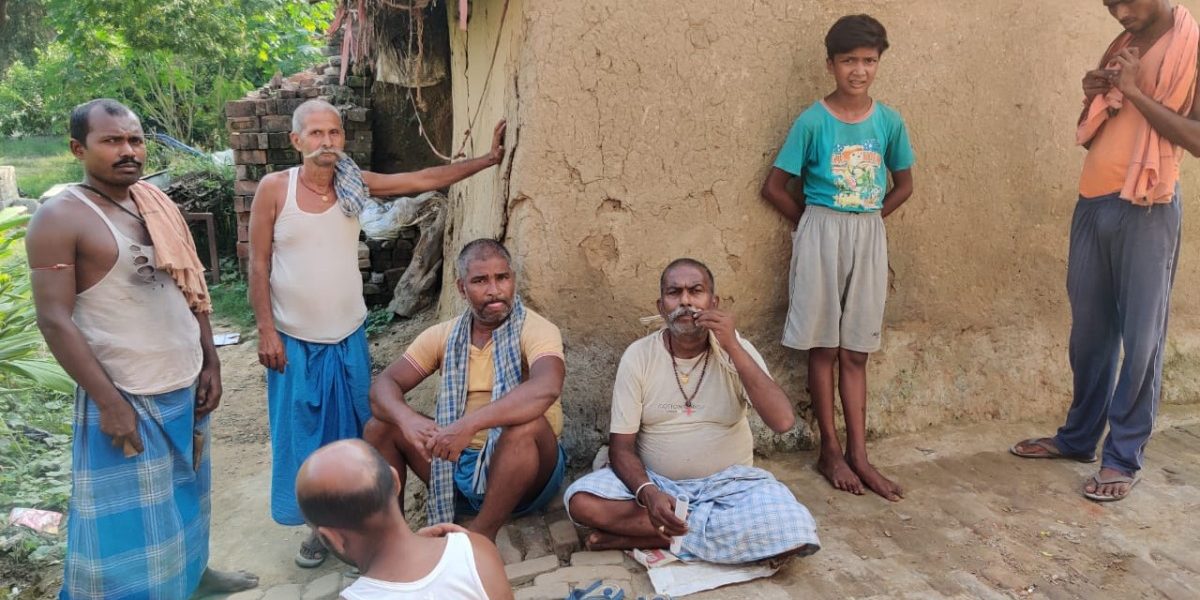 Barh/Harnaut: In most of his election rallies, Bihar’s chief minister Nitish Kumar has compared his 15-year uninterrupted tenure with the previous Rashtriya Janata Dal (RJD)-led government, which lasted for roughly the same period. He has not only been talking about development work during his terms – which earned him the title of Sushashan Babu – but also reminded people of the grim law and order situation during Lalu Prasad Yadav’s, and later his wife Rabri Devi’s, stints as chief ministers of the state.

Political observers have wondered why Kumar needs to recollect RJD’s alleged misgovernance when he has been steering the state government for more than a decade, and has a range of achievements to show. Is Kumar on the back foot? Despite multiple opinion polls predicting a win for the National Democratic Alliance (NDA), is he fearing a backlash in the upcoming elections?

While Harnaut, Kumar’s former assembly seat, is in Nalanda, the adjoining Barh is on the outskirts of Patna district. In both these constituencies, Kurmis, Kumar’s own caste group, are in a majority, and have been a dominant section. Fighting them for political hegemony in these seats are mostly Yadavs and Bhumihars, who are numerically weaker than Kurmis. 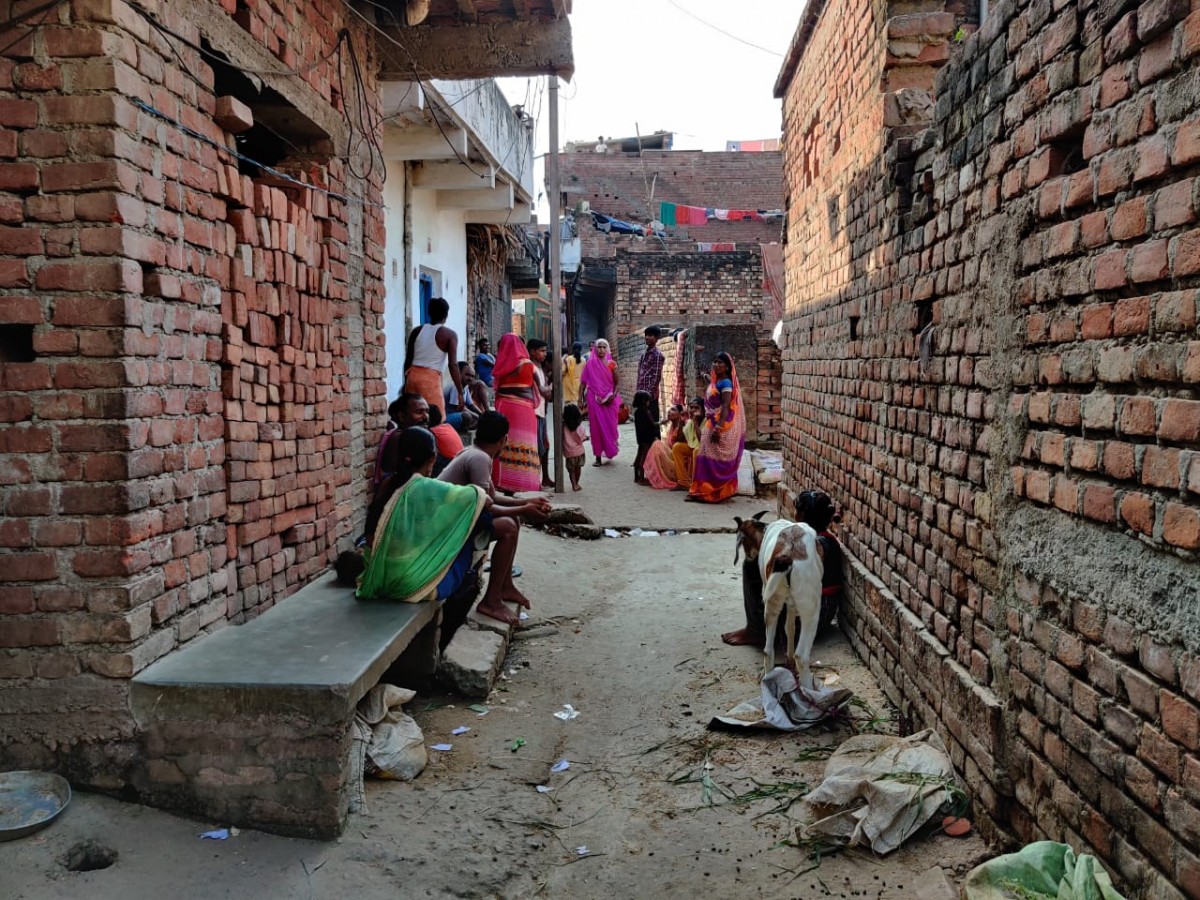 What has turned these regions into a Janata Dal (United) bastion are smaller economically backward classes (EBC) groups comprising Kahar, Khushwaha, Teli, Nonia, Dhanuk and other such castes. Dalits here comprise mostly Paswan, Ravidassias and Pasi communities. The BJP-JD(U) combine appears to be an invincible force on paper. Together with the ‘upper’-caste communities, a large majority of which have supported the BJP traditionally, all EBC and Dalits groups have voted in favour of Kumar in at least the last three elections.

However, this time around, cracks are clearly visible in the combination. In both these seats, almost all believe that Kumar has run a fairly good government over the years. However, aspirations here are on the rise among Kurmis, even as Dalit communities believe that much of the development work that happened in the area did not benefit their tolas (colonies).

At Belchhi village, a part of the Barh seat, a group of people, all from the Kurmi community, believe that the NDA will corner a majority of the votes from the area again. “Kumar comes from our community. So we will vote for him again,” an elderly man, lying by the side of a pond, told The Wire.

When asked what he thought about Kumar’s government, he said, “He was good in his first two terms. But the last few years, he neither showed his face here nor did anything good for us.”

He was particularly resentful of the sitting MLA, Gyanendra Kumar Singh Gyanu. “He can’t be reached. Only those who are close to him benefitted during his tenure. He moves around with his cronies, and never bothers about common people like us,” he said, as most in his group nodded in agreement.

Gyanu is the BJP candidate again from Barh. He first won in the October 2005 elections on a JD(U) ticket, and went on to retain the seat in 2010 and 2015, the last term as a BJP candidate.

Belchhi witnessed one of the most horrific caste massacres in independent India. On a May afternoon in 1977, a gang consisting of mostly Kurmis captured 11 assertive young men, who came from the Paswan and Sonar communities, tied them up, shot them, and cremated them one by one in a mass pyre. The incident sent shockwaves across the country, forcing Indira Gandhi to visit the village. A photo showing Gandhi on an elephant travelling to the village which has no roads at the time still makes it to many exhibitions.

Kurmis of Belchhi, however, told The Wire that such caste wars are a thing of the past. “Today, all of us have similar worries – that of unemployment and lack of a fixed income,” said one Kurmi resident of the village. “Abhi kamane khaney ki ladaai mein hi sab vyasth hai. Aadhey se jyada gaon ke log bahar chale jaate hai kaam karne (These days, the struggle is to earn a decent living. More than half of the villagers migrate to work outside),” said Mukesh, a Kurmi resident of Belchhi.

“We are helpless. Here, there are no jobs. Whatever government schemes are announced by the government are siphoned off by the local musclemen,” he added.

“Sarkaar toh de rahi hai magar hamare pass pahunchne se pahle hi saara gayab ho jaata hai (The government is releasing funds for our benefits but it gets lost before it reaches us),” he said. 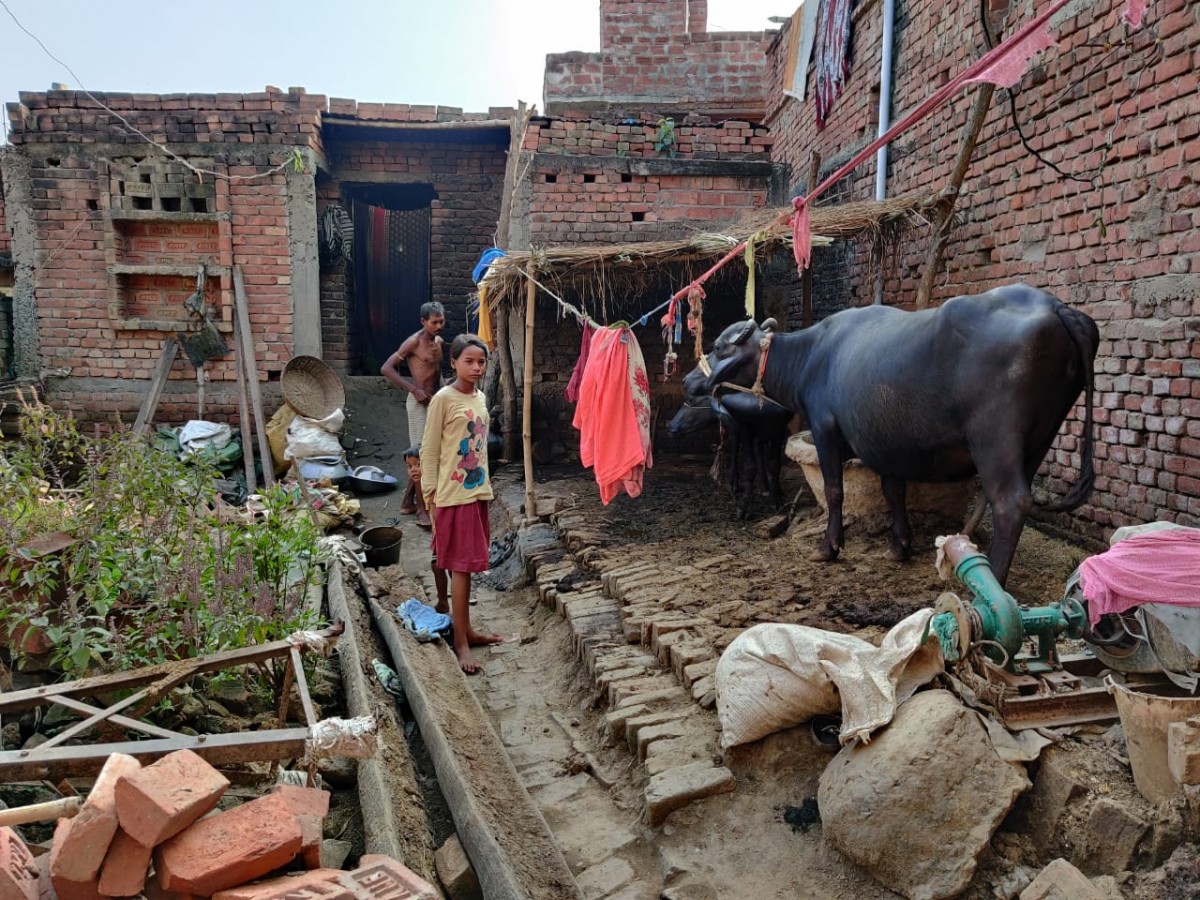 People from Paswan and Pasi communities agree. Yet, they list out their share of problems which are unique. While they complained about large-scale corruption, they also spoke about how most development work does not reach their colonies, which are usually at the backend of every village.

“See for yourself how we are living. There has been no work even before the lockdown. The officials do not come to check whether we got the free gas cylinder or zero bank accounts. No one comes here,” said Raju Paswan.

“We have been voting for Nitish ji in elections but there has been no improvement in our conditions. Had it not been our own enterprise to rear animals, we would have starved to death,” he said.

The Pasi residents of Belchhi were even angrier. “Our only source of income came from toddy tapping. But ever since Nitish ji announced prohibition, we have been at the mercy of the policemen,” said Bablu Chaudhary, a Pasi middle-aged person of the village.

Toddy-tapping hasn’t been listed by the state government as a prohibited occupation, but most Pasi residents said that the policemen of the area do not care. “Only poor toddy-tappers who earn around Rs 500 per day are beaten up by the police. But those who are in wholesale illegal business are not left untouched.”

Also read: Bihar: In His Bastion of Raghopur, Tejashwi Yadav Looks Set For an Easy Win

On being asked whether they received government relief during the lockdown, a number of people said that they didn’t get the promised Rs 6,000 announced by the government. “We only got free ration from the government but that was not enough for the whole family. Dhaar-udhaar kar ke chal rahe hai hum. Kaam toh koi hai nahin. Pehle Delhi-Bombay chale jaate the. Ab wahan bhi kaam khatam ho gaya (We had to borrow money for survival as there are no jobs. Earlier we went to Delhi-Mumbai but there is no work even there now),” said Beena Devi, a Pasi woman.

Most Dalits of the village said that they wouldn’t vote for Gyanu but remained unsure about whether they would vote for the Mahagathbandhan candidate Satyendra Bahadur of the Congress. “We do not know who he is. We have never heard of him. I am thinking of voting for Lallu Mukhiya who has always been around for us,” said a Paswan resident of Belchhi.

Karnvir Singh Yadav, known as Lallu Mukhiya in the area, is contesting as an independent candidate from Barh. Said to be close to Bahubali (strongman) leader Anant Singh of Mokama, he has turned the Barh poll into a triangular one. 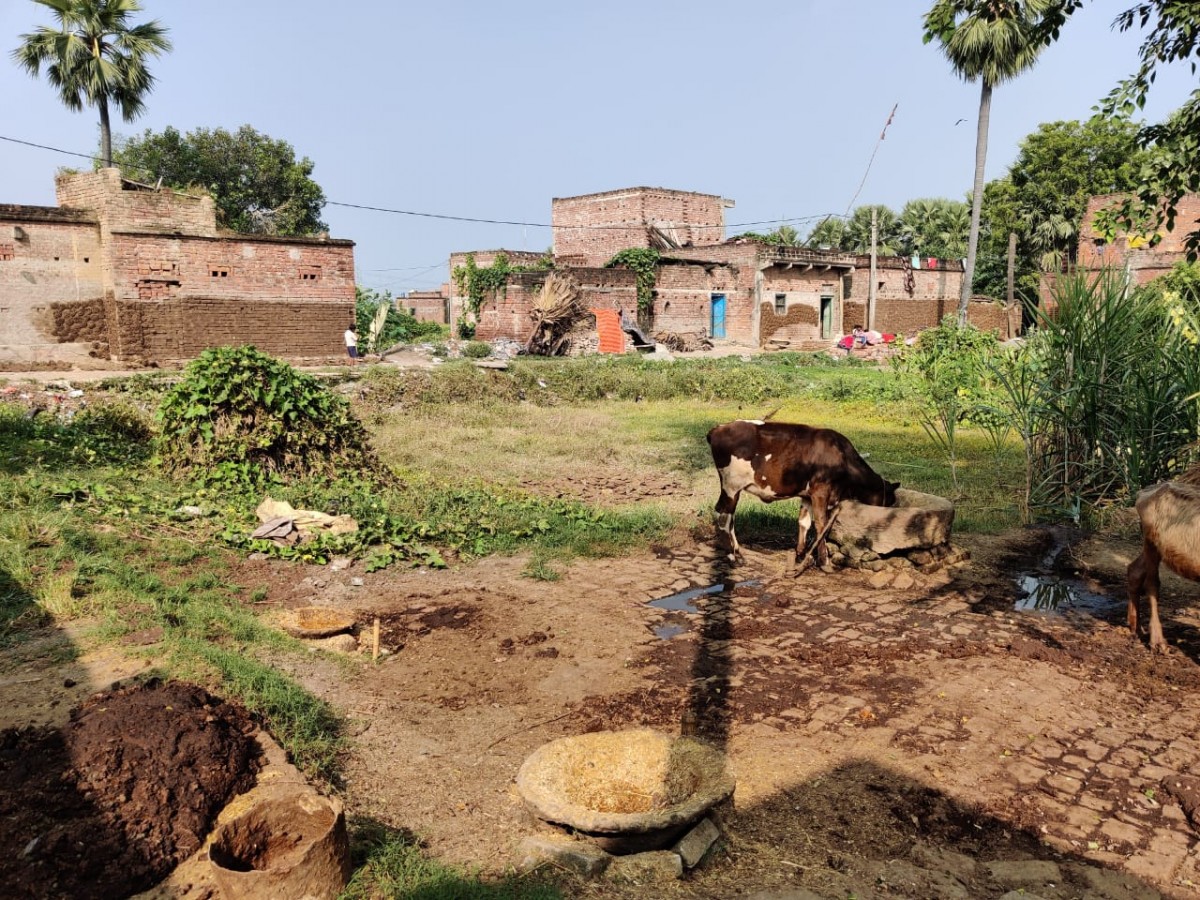 Around 15 km away, at a village in Harnaut constituency, which elected Kumar in 1985 and 1995, the responses were similar. While Kurmis rued the lack of jobs and good education facilities, and were upset with Kumar, most didn’t want to vote for any other leader. Here, Harinarayan Singh, JD(U) leader, is seeking his third straight term as a MLA.

Kurmis appeared to be upset with Singh as they claimed he has been an absentee legislator. However, they didn’t consider the largely-unknown Congress candidate Kundan Gupta as an option.

“Nitish ji comes from Kalyan Bigha, which is a few kilometres away. But it seems he has forgotten his roots. He developed the area, brought roads, got schools and hospitals here but did nothing for our livelihoods. In Harnaut, you will find hundreds of graduate boys who are sitting idle at home. Cronies of local leaders have become rich but common people have become poorer,” a Kurmi fruit-seller in Harnaut told The Wire.

A group of people who The Wire happened to meet on the Harnaut-Bakhtiyarpur highway echoed sentiments that were similar to those of the Dalits of Belchhi.

“Nitish ji’s government has become too corrupt. The local leaders and officials siphon off most funds that come from Patna and Delhi. How is Nitish ji a good leader if he can’t control his own leaders and officials?” one from the group said, adding that he will not vote for Singh in the polls.

Many also said that Nitish should not have jumped ship midway in the last government to ally with the BJP, but their main issue was with declining incomes during his tenure.

Interestingly, none of these groups perceived the BJP in a poor light, as if the saffron party did not share power with the JD(U).

“Nitish ji hi chala rahe hai na sarkaar. BJP toh unke neeche hi hai (Kumar is only running the government. BJP is under him),” a Paswan resident of Harnaut said when asked about what he thought about Sushil Modi, the deputy chief minister, and his party.

Cracks are visible in Kumar’s stronghold. Mahadalits are signalling that they may desert Kumar, while EBCs are showing signs of fatigue against Kumar’s leadership. He may still get to wield the baton in his citadel – weak opposition candidates will have much to contribute to NDA’s victory. Kumar has an inkling of the growing resentment against him. Perhaps that is why reminding the public of the so-called “jungleraj” during Lalu Prasad’s regime has become so significant for him.