Bihar: By Entering the Fray, LJP Has Complicated Social Equations in Multiple Seats

Several communities that are traditionally seen as NDA supporters are now considering switching over to Chirag Paswan's party, setting up a triangular contest in many constituencies. 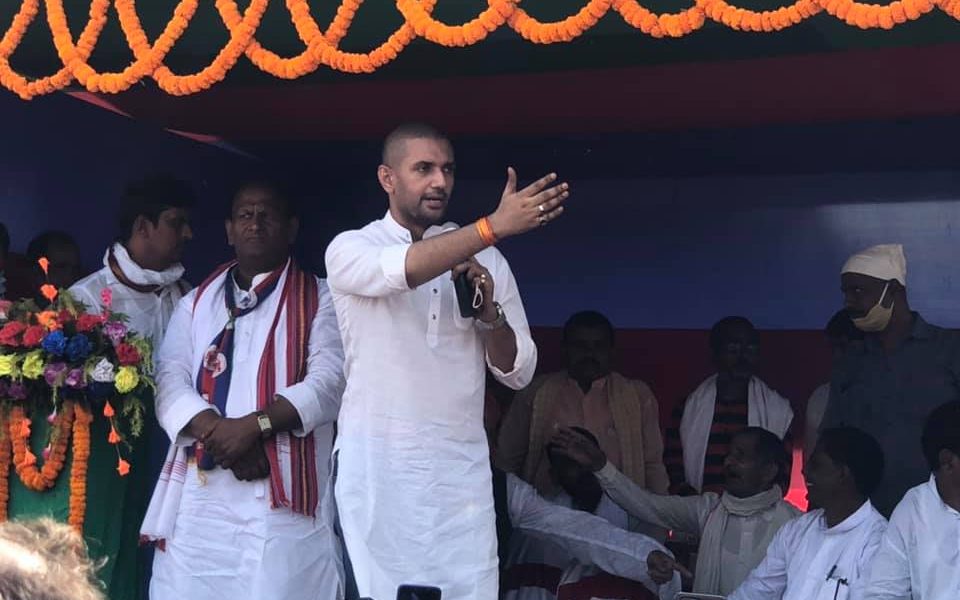 Arrah/Gaya/Raghopur (Bihar): At Arrah’s Naarhi village, as the sun was about to set, a group of young men enthusiastically waited to welcome Rajeshwar Paswan, the Lok Janshakti Party (LJP) candidate from the reserved constituency of Agiaon. All of them belonged to the land-owning Bhumihar caste, considered to be the most influential group in the region.

“Nitish chacha ko hatana hai. Is baar nahin (It is time to vote out Nitish),” one among them declared.

“So, will you vote for Mahagathbandhan,” this correspondent asked. Up against the sitting Janata Dal (United) MLA Prabhunath Prasad, who is facing strong opposition for allegedly remaining an absentee representative through the last term, is the CPI (ML-Liberation) candidate Manoj Manzil, who is contesting as an opposition alliance nominee.

“Hamare umeedwaar Lojapa pratyashi Rajeshwar Paswan hai. Unko humhi ne khada kiya hai (Our candidate is Lok Janshakti Party’s Rajeshwar Paswan. We have fielded him),” he said, while another in the group directed Paswan’s convoy to the village.

“Hum log is area ke kingmaker hai. Is baar bhi hamara umeedwar hi chuna jayega (We are the kingmakers of the area. This time too, our candidate will be chosen,” he added.

Also Read: Bihar: In His Bastion of Raghopur, Tejashwi Yadav Looks Set For an Easy Win

Speaking to The Wire, Paswan said, “Our leader Chirag Paswan is going to form the government with the BJP, under the leadership of Prime Minister Narendra Modi,” he said.

“I will work for all communities here. I will represent everyone here,” he added in an apparent dig at the CPI (ML-Liberation) which has historically sided with the Dalit and backward communities in Arrah – a region which two decades ago witnessed brutal caste wars between land-owning communities and the landless Dalits.

Not a bipolar contest anymore

Like Agiaon, the presence of LJP candidates in the electoral fray has complicated social equations in multiple seats of Bihar. The assembly polls were initially seen as a straight bipolar contest between the JDU-led National Democratic Alliance (NDA) and Rashtriya Janata Dal-led Mahagathbandhan (grand alliance).

However, the LJP, firmly under the grip of Ram Vilas Paswan’s son Chirag Paswan, pulled out of the NDA at the last minute to muddy the waters. Chirag, who has been heavily critical of chief minister Nitish Kumar’s tenure, declared that he will field his candidates only against the JDU’s while supporting the BJP candidates, wherever the saffron party is contesting. He also has been unrelenting in showing his love for the prime minister, causing embarrassment for many in the Bihar unit of the BJP – which is fighting the elections in alliance with JDU.

Political observers see the development differently enough to keep the interest in the polls alive. A section of them believe that the LJP’s last-minute exit from the NDA is a ploy by the BJP to keep Nitish Kumar in check. Some others think that Chirag’s exit marked Kumar’s domination in the NDA vis-a-vis the Bihar unit of BJP. It was Kumar, they think, who ensured that Chirag is kept out of the NDA as he is confident of getting the support of the Paswan/Dusadh community – a Dalit group said to constitute around 4% of the state’s population, and who are seen as the LJP’s loyal vote bank.

Another section believes that the LJP may also neutralise the strong anti-incumbency sentiment against Kumar. “Chirag Paswan represents the youth leadership along with RJD’s Tejashwi Yadav. People under the age of 35 form the majority of the state’s electorate. Given this, a large section of the youth who would have otherwise voted for the Mahagathbandhan may look at the LJP as an alternative,” said a Patna-based political analyst who did not want to be named.

While the LJP may end up cornering what could have possibly been Mahagathbandhan votes, The Wire found that in at least four seats of central Bihar, LJP has become a pad for “upper” caste groups.

In Agiaon, Patna’s Paliganj, Vaishali’s Raghopur and Gaya’s Imamganj, a large section of disgruntled upper caste groups are backing the LJP candidates. This may mean that the party is more likely to undercut the traditional NDA votes than those of the opposition alliance.

“Ideally, we would have liked to vote for the BJP. But since the JDU got the ticket, we will shift to the LJP,” said a Rajput man in Baddhiyan village of the Agiaon constituency.

Similarly, in Paliganj, a Bhumhar voter told The Wire, “Usha Vidyarthi ko dene ka soch rahe hai is baar (I am thinking of voting for Usha Vidyarthi).” Vidyarthi is a former BJP MLA but is contesting on an LJP ticket.

In Raghopur, where Tejashwi Yadav is seeking a second term, a BJP supporter said that the LJP has spoiled the equation for his party’s candidate Satish Kumar Yadav by fielding Rakesh Roshan, a Rajput.

“Roshan has made Tejashwi’s contest easier. If the LJP had not fielded a candidate, he was still likely to win but with fewer votes. Now, Rajput votes would shift to the LJP, dividing the anti-RJD votes,” he said. Roshan, too, had a BJP background but switched over to the LJP to contest the elections.

In Imamganj, where NDA ally Jitan Ram Manjhi is in the fray, the contest has turned triangular because of LJP candidate Shobha Sinha, another former BJP leader. 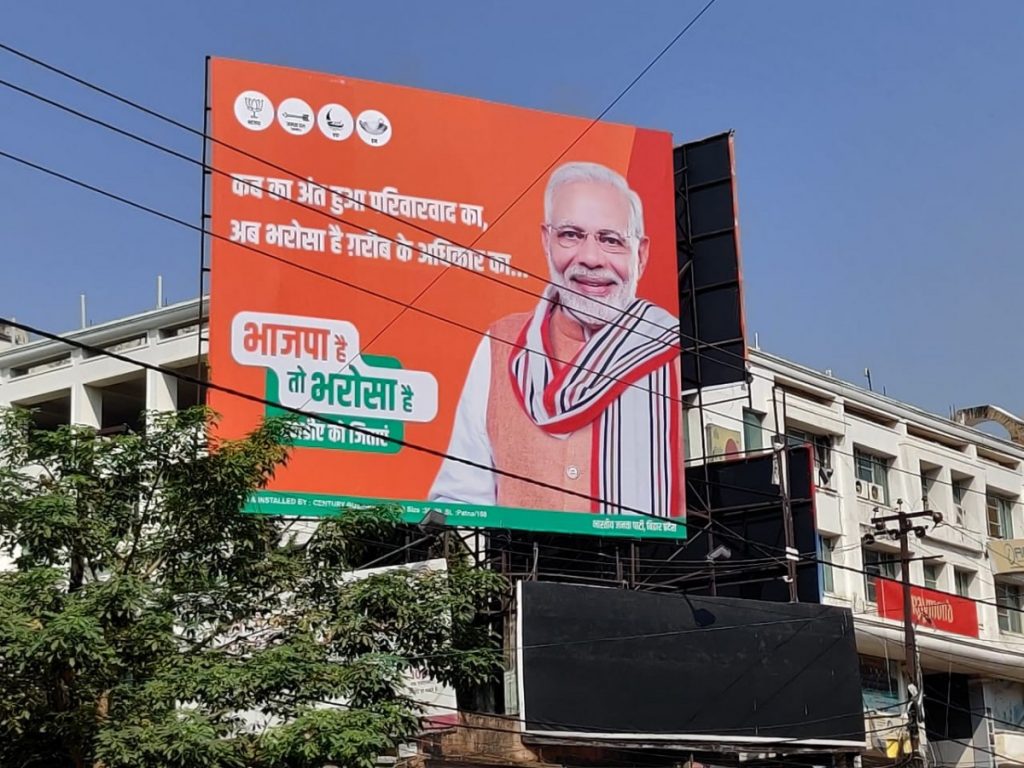 It may seem ironic that the LJP, a party seen as representing Dalits in the state, has given many tickets to former BJP leaders, most of whom belong to “forward” caste groups.

Yet, Chirag has not hesitated to give tickets to them in the hope that he can wrest a few seats with the help of upper caste communities. Two of his candidates – Rajendra Singh and Ramesh Chaurasia – were BJP’s bigwigs before they took LJP tickets. Singh, a former Bihar BJP vice-president who was credited for playing an important role in the party’s 2014 victory in Jharkhand and was considered a probable chief ministerial candidate in the 2015 Bihar assembly polls, is now contesting from Rohtas’s Dinara on an LJP ticket.

“Some of the other LJP candidates with an RSS background include Pradip Thakur from Darbhanga Rural, Deo Ranjan Singh from Maharajganj and Rameshwar Chaurasiya from Sasaram,” reported The Quint, which added that RSS workers are campaigning for both the BJP and LJP candidates who have been associated with the Sangh parivar.

A significant number of LJP candidates came from the BJP mostly because the seat-sharing arrangement with the JDU has left them disgruntled. In the 2015 elections, most BJP candidates got a chance to contest elections because their party fought against the JDU. Senior journalist Manoj Singh, who has been touring north Bihar for The Wire, said, “Many BJP leaders are complaining about the fact that after nursing their assembly seats for five years, they are expected to leave it for the JDU’s candidates during the elections.”

The BJP is known for keeping its house in order. However, the turmoil in its state unit has defined the upcoming assembly polls in Bihar. As far as the LJP is concerned, it remains to be seen whether it will gain enough to put the NDA at a disadvantage against the RJD-led alliance.