The Numbers Hide a Political Churning in Bihar

While the Vidhan Sabha numbers have remained largely the same, the political map looks rather different.

Bihar has characteristically thrown up a fascinating result from the elections for its 17th Vidhan Sabha.

The Bharatiya Janata Party-led National Democratic Alliance has won a majority of three seats, with a total of 125 of Bihar’s 243 assembly segments. The opposition Rashtriya Janata Dal-led Mahagathbandhan, or Grand Alliance, is not far behind, with 110 seats.

These totals are vastly different from the last assembly election, which gave a more than two-thirds majority to the Mahagathbandhan. The NDA was reduced to just 58 seats. Famously, chief minister Nitish Kumar, leader of the Janata Dal (United), walked out of the Mahagathbandhan in July 2017, and crossed over to the NDA camp. The subsequent Bihar assembly is nearly identical to the new assembly elected this November. There is a difference of just two seats in the totals of the two main coalitions at the end of the 16th and start of the 17th Vidhan Sabha.

The election chart of July 2017 compared to November 2020, however, masks a vast churn that has changed Bihar’s political map.

Bihar’s voters switched parties in 127 seats – just over half the total. This, however, does not by itself indicate changing preferences, as voters in some cases opted for another party in the same coalition, for instance from RJD to the Left parties. For a true picture of change, we therefore need to see seats which switched between coalitions and other parties. Voters switched between coalitions and other parties in 110 of 243 seats – a striking 45% – leading to entire chunks of NDA orange and MGB blue getting interchanged on the political map of Bihar.

Much of the change is accounted for by the four larger parties within the NDA (BJP and JD(U)), and Mahgathbandhan (RJD and Congress). The NDA and Mahagathbandhan each gained 53 seats they did not hold in the last assembly. The NDA held onto 71 seats, 57% of its total, and the Mahagathbandhan 56 seats, 51% of its total. 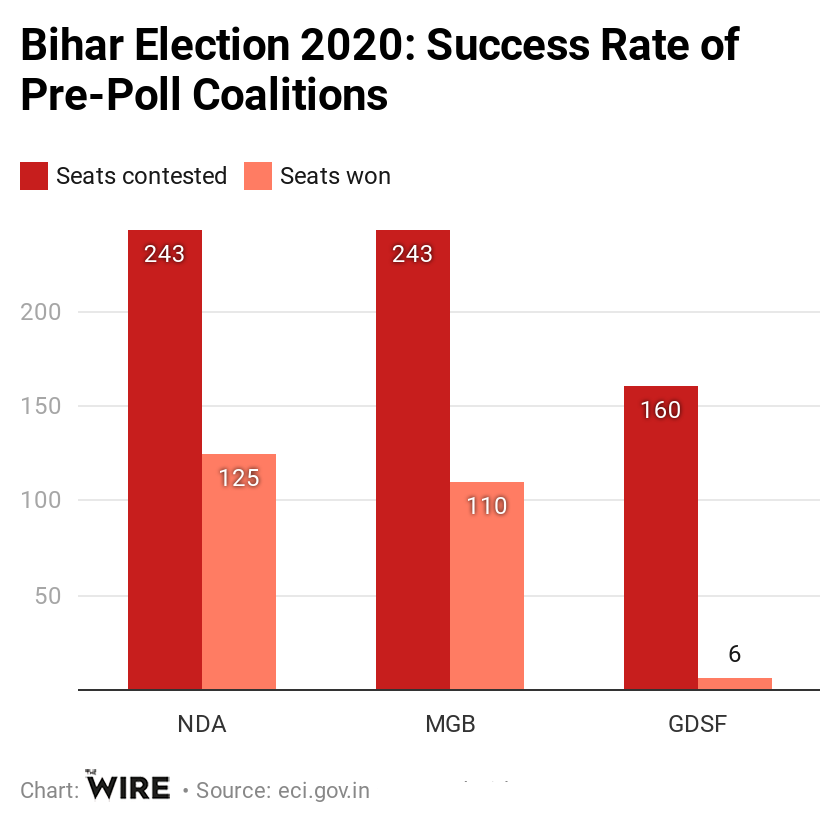 Of the constituent parties of the NDA, BJP won 67% of seats it contested, scoring 74 out of 110 and losing 15 of the seats it held in the last assembly. The JD(U) in comparison bled seats, with a strike rate of only 37.4%, just over a third. It lost 36 seats to Mahagathbandhan candidates. Yet by several accounts, the NDA chief minister will be Nitish Kumar once again. The largest NDA party, BJP, has reaffirmed that Nitish will have a fourth term as chief minister of Bihar, perhaps to insure against the JD(U) chief experiencing another mood swing halfway through the 17th assembly.

Also read: The Numbers of the Bihar Results Do Not Tell You Who the Real Winners Are

Jitan Ram Manjhi’s Hindustani Awam Morcha (Secular) and Mukesh Sahani’s Vikassheel Insaan parties have both fared well after leaving the Mahgathbandhan after the parliamentary election in 2019, and joining the NDA. HAM(S) quadrupled its assembly presence, winning four of six seats it contested, with some extraordinary eleventh hour victories coming in the wee hours of November 11. VIP opened its account, winning four out of 11 contested seats, though Sahani himself lost to the RJD candidate in Simri Bakhtiarpur. 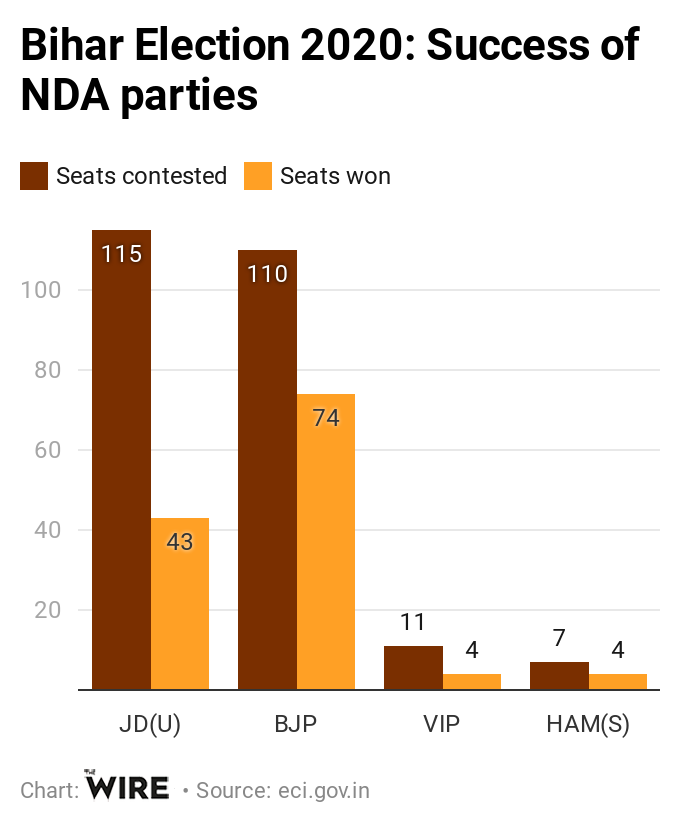 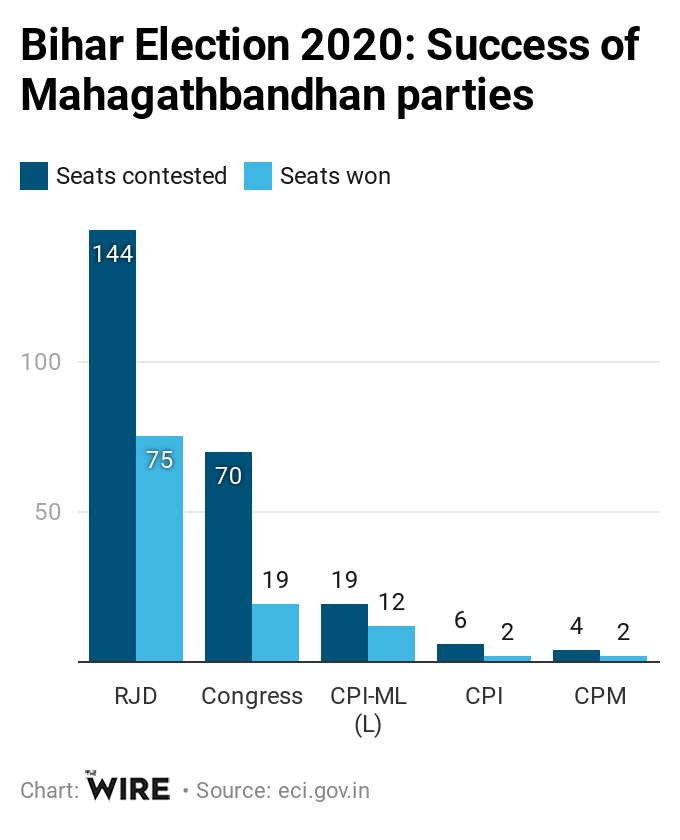 The Grand Democratic Secular Front stitched together by former Union minister Upendra Kushwaha’s Rashtriya Lok Samata Party, fell flat in the election, winning only 6% of the seats it contested. The RLSP, already smarting with its entire parliamentary presence of two MLAs quitting to merge with the JD(U) in the last assembly, was wiped out. The All India Majlis-e-Ittehadul Muslimeen alone put up a notable number of seats, winning 25% of the 20 seats it fought, ending up with 5. The Bahujan Samaj Party opened its account, wresting one seat from the BJP. The Samajwadi Janata Dal Democratic and Suheldev Bhartiya Samaj parties failed to open their account.

The AIMIM’s seats came at the expense of the RJD (2), Congress (2) and JD(U) (1). Anecdotal reports suggest AIMIM may have cost the Mahagathbandhan parties more seats where it came third or fourth, by cutting into their votes. Similarly, Chirag Paswan’s Lok Janshakti Party, which fought alone on 135 seats, won just one, taking a seat from the JD(U). The LJP reportedly cost JD(U) even more. This however, can only be ascertained by a deeper dive into current and past results from Bihar, in the days to come. It will also be seen, then, if Rajeev Ranjan urf Pappu Yadav’s Jan Adhikar Party (Loktantrik)-led Progressive Democratic Alliance of four parties, which scored a big duck, also made an impact in some seats.

But for now, it is the impact of the Left and AIMIM that are the remarkable side stories of the assembly elections, adding their own prominent splashes of colour to Bihar’s changed political map.