A JNU activist, Sandeep Saurav now finds himself a candidate of the very alliance whose parties the CPI (ML-Liberation) fought against. 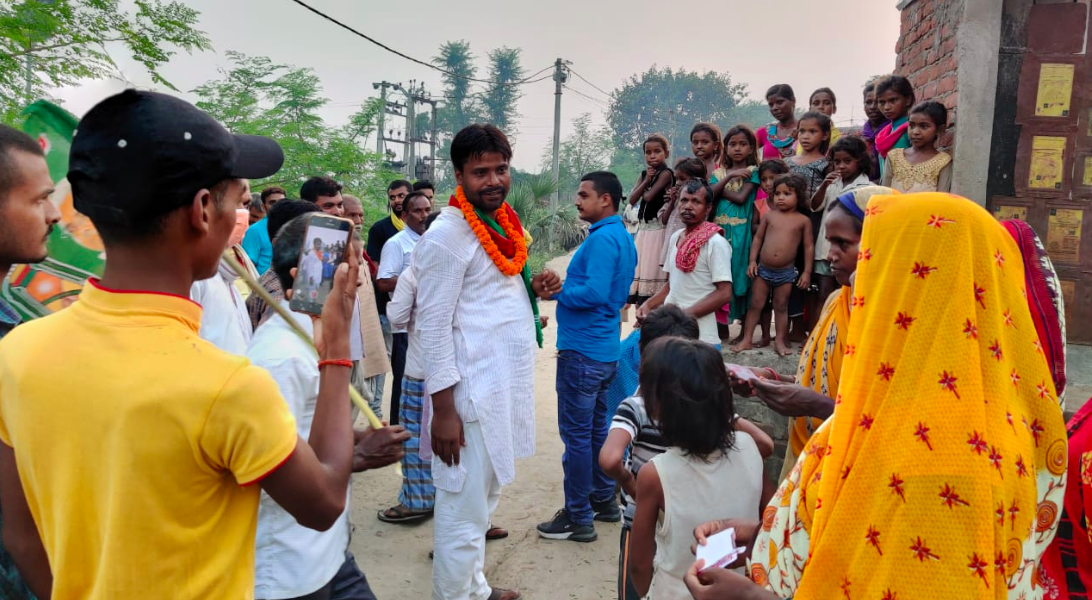 Paliganj: On a sultry afternoon, Communist Party of India (ML-Liberation) candidate Sandeep Saurav’s humble convoy of three cars and a few motorbikes travelled around the villages of the Paliganj assembly seat near Patna.

Saurav, a former student of Jawaharlal Nehru University is a thoroughbred activist. On the road, he made frequent stops to greet people, speak to them, ask them for support, and constantly brought up issues regarding poor education infrastructure and large-scale unemployment in the state. People listened to him with some degree of wonder and some degree of amusement.

“Shiksha ka adhikar, nahar mein paani, aur rozgaar ka sadhan. In teen muddon ko lekar chunav mein aapke saamne aaya hoon (‘Right to education, water in the irrigation canal, and provisions for jobs. I have come to you with these three issues for this election’),” Saurav stopped his car and said to passers by at Gulalchak village in the Paliganj assembly seat.

Some listeners seem to agree but a supporter of the opposition alliance breaks into the conversation, “We do not want anything from you. We have no demands except that if you are elected, you should visit us occasionally, listen to us.”

The expectation is minimal but most people from poor backgrounds in Bihar expect just this from their electoral representatives. While the sentiment reflected common people’s disillusionment with electoral politics, Saurav said he would strive to reverse it.

“If at all I get elected, I hope to sincerely attempt to restore people’s faith in politics again,” Saurav said, adding that one of the reasons he decided to contest the assembly polls was to put “people’s real issues” on the forefront.

“Our party has led historic struggles against caste injustices in Bihar and has come a long way from fighting a struggle to ensure the basic dignity of people. Now, it is time to talk about their right to employment, education, and livelihood,” he said.

As his car moved forward, Saurav looked back at the group, and apologetically said, “Chunav tak phone nahin utha payenge. Bahut kaam baaki hai. Magar chunav ke baad, kahna nahin padega. Hamesha aap logon ke beech mein hi rahenge (‘I can’t take too many calls until the elections are over. A lot of work is pending. But after the polls, you don’t have to say anything. I will remain in your midst.’)

Saurav is the latest Leftist student activist to enter the electoral arena. Although he hails from adjoining Maner, his political life began in JNU as an All India Students Association (AISA) activist. He spent most of his university life agitating against the Centre on issues that are dear to the Left. He has a doctorate degree in Hindi literature.

His involvement over the years in protests against the Union government’s policies to increase access to private players in the field of higher education – much of which has come at the cost of government-funded facilities – and the looming problem of widespread unemployment in the country became the primary reasons for his decision to take up a full-time political role.

Soon after his PhD, he landed a job of an assistant professor at a Bihar college. However, he decided against leading a middle class life. “Once you get an academic position, you get into a comfort zone. It would have been very difficult to leave a secure job and get into politics. I thought this is the right time to take the plunge.”

Saurav’s candidature in the polls was also facilitated by his party’s leadership which, as part of its strategy to enforce a generational shift, has fielded a number of young leaders like Manoj Manzil, Ranjit Ram, Aftab Alam, Jitendra Paswan, Shashi Yadav, and Ajit Kushwahare – all of whom are either in their thirties or early forties.

Yet, the challenges in front of him are multiple. For many in Paliganj, he is an unfamiliar face despite his Maner roots. Most know him only as a candidate from “Maaley” – the regional acronym for CPI (ML-Liberation) – who has been fielded against the sitting MLA Jai Vardhan Yadav.

Yadav is son of the stalwart socialist leader Ram Lakhan Singh Yadav, and won in 2015 on a Rashtriya Janata Dal ticket. However, days ahead of the polls, he switched camps, and is currently the ruling Janata Dal (United) candidate from the seat. Up against him is another former BJP MLA Usha Vidyarthi, who is contesting on a ticket from Chirag Paswan’s Lok Janshakti Party. 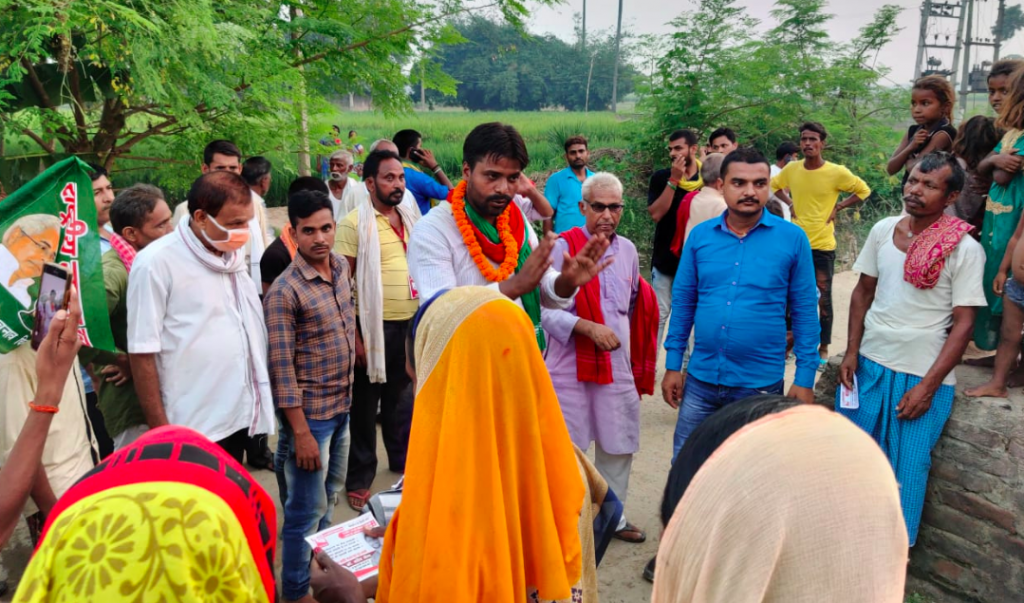 “Do purva vidhayak se ladaai hai. Unke paas paisa aur bal donon hi bharpoor hai (‘Our fight is against two former MLAs. They are loaded with both money and muscle’),” Saurav told The Wire, as he and his co-campaigners stopped at a Dalit tola (colony) which had organised a litti chokha meal for the team.

A few metres away, Yadav’s fleet of at least 20 cars rushed past the tola towards a nearby site for a rally, flouting COVID-19 election protocols with impunity. Saurav appeared unfazed as he went on to talk about how his upbringing in Maner did not expose him much to the problems of the area.

“We were all insulated from power politics as children. I come from a very common background. Only after I went to JNU, did AISA expose me to the deep-rooted injustices in our society. Since then, I have not looked back. Irrespective of the election result, my struggle for an equitable world will continue,” he said.

His supporters, however, were concerned about how the various communities will eventually vote in the area, given the fact that caste equations have played the most significant role in deciding the outcome of the state’s elections in the post-Mandal era.

The alliance between RJD, Left parties, and Congress throws up new political possibilities as much as it complicates ground-level social equations. CPI (ML-Liberation) has had a long history of militant movement in the area. While historically the party has lent itself to the land struggles of Dalits and marginalised OBC communities against ‘upper-caste’ groups like Bhumihars and Rajputs, much of their recent efforts in the region has been directed against the dominance of Yadavs in land relations. 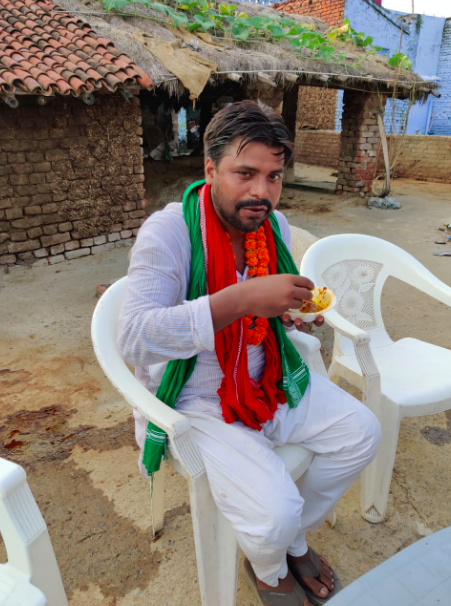 The Left party has a strong presence among the most poor in the region as its activists were the first to help them occupy government land for cultivation and shelter, and then secure welfare benefits for them.

With the CPI (ML-Liberation) as a part of the Rashtriya Janata Dal-led opposition alliance in these polls, a section of its supporters are unsure about whether the political alliance will reflect in the voting pattern.

“Sandeep is the Mahagathbandhan candidate. The last Maaley candidate polled around 20,000 votes on his own. Our supporters in the area will never abandon us. But we hope that people from the Yadav community who have traditionally supported the RJD will back Sandeep,” said one party worker.

Another party worker, however, was more hopeful. “The political conditions have changed. The Yadav community is no longer as dominant as it used to be. They are reeling under the same economic and social pressures as people from other marginalised communities. The assembly polls are being fought on the issues of employment and mis-governance of the JD(U)-BJP government in the state. The Mahagathbandhan should translate into a larger social coalition against the Nitish Kumar-led government,” he said.

Most RJD leaders, including former MLA from the seat Dinanath Singh Yadav, have been playing their part in the alliance. Many of their workers have been moving around with Saurav, introducing him to villages which have historically been supporting the Lalu Prasad Yadav-led party, and are actively campaigning for him.

Perhaps because of this, the ruling National Democratic Alliance has been looking to find an effective way to flatten the possible unity among people across caste groups. At present, it has made sure that all its leaders attack the RJD, the larger force in the coalition, for its alleged extremist turn in allying with communist parties.

At a recent rally that Chief Minister Nitish Kumar addressed in the seat, he termed the RJD-led alliance as “ugravadi” or extremist. His intention was ostensibly to lampoon the CPI (ML-Liberation). In a similar effort to foreground social fault lines in the region and across the state, through which the NDA hopes to neutralise the opposition unity, BJP’s national president J.P. Nadda, in almost all his rallies, has tried to put down the RJD as the “mask” that the Mahagathbandhan has put on to hide its “Naxalite” agenda.

Saurav’s spirit is not to be dampened.

“These allegations are given undeserving importance in the media. If you move around in villages, a groundswell of emotions against the state government is clearly palpable. People know that Maaley is a party for the poor, for the unprivileged. They have known its work for ages now. Our motto is social and economic justice, and people know about it,” he says.