Bihar: Nitish Kumar To Take Oath at 2 pm on Wednesday With Tejashwi as Deputy

Nitish said he has the support of 164 MLAs from seven parties, comfortably more than the midway mark of 122. 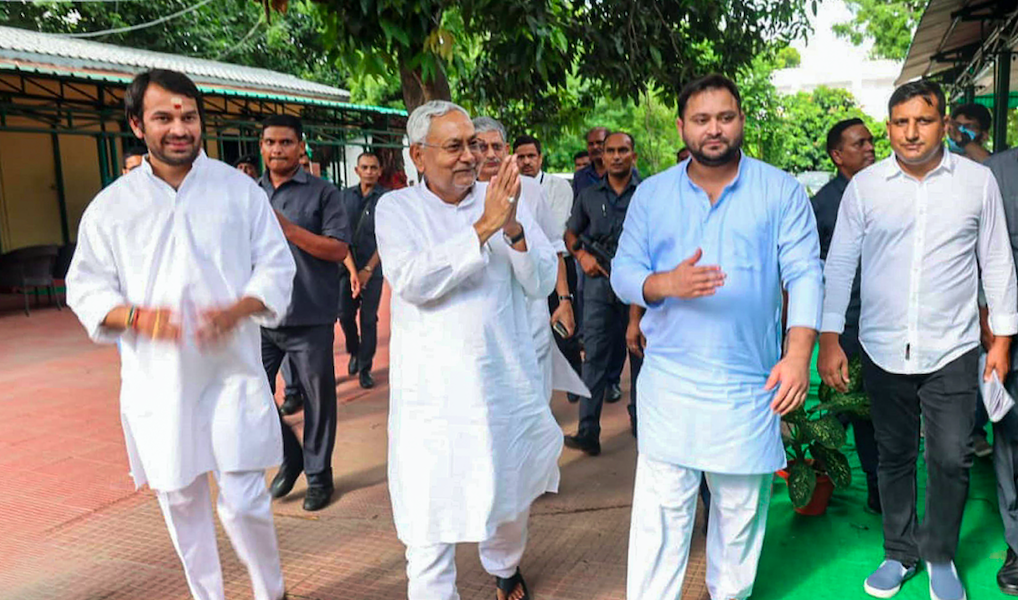 New Delhi: Bihar chief minister Nitish Kumar has resigned from his post and formally broke with the National Democratic Alliance and will form the government with former ally Rashtriya Janata Dal (RJD) and five other parties on Wednesday.

“There are seven parties in the Mahagathbandhan [grand alliance], with a total of 164 MLAs, including Independents,” the Janata Dal (United) chief told reporters. The effective strength of the state Assembly is 242 and the magic figure is 122.

Kumar and Tejashwi Yadav will be sworn in as the chief minister and deputy CM respectively at 2 pm on Wednesday in Raj Bhavan.

RJD chief Tejashwi Yadav said that the Bharatiya Janata Party’s “agenda” will be halted with this development.

#WATCH | Nobody can take the legacy of our ancestors…We thank Nitish Kumar as well as Laluji…All of us wanted BJP's agenda shouldn't be implemented in Bihar, we all know Laluji stopped 'Rath' of Advaniji, we won't relent at any cost: RJD 's Tejashwi Yadav with Nitish Kumar pic.twitter.com/HyZjUankoO

The new cabinet will have representatives from the RJD and Congress besides JD(U), according to sources. The Left parties are likely to give outside support to the new government “retaining their independent identity”.

Nitish said that he resigned after JD(U) leaders, in a legislative party meeting held earlier in the day, arrived at the decision to quit the Bharatiya Janata Party-led NDA. He met governor Phagu Chagan to hand in his resignation letter.

Immediately after announcing his resignation, Nitish met RJD’s Tejashwi Yadav at his mother and former chief minister Rabri Devi’s house to discuss the composition of the next cabinet.

Leaders of the ‘grand alliance’, comprising the RJD, Congress and Left parties, had gathered at Rabri Devi’s house.

Sources said that Congress mediated the last round of talks between the RJD and JD(U).

He returned along with the leader of the opposition and his former deputy Tejashwi, who was armed with a letter of support to Kumar. About 15 minutes later, Kumar met the Governor again to stake claim for forming a new government, this time accompanied by Yadav and senior colleagues in the JD(U) besides former Chief Minister Jitan Ram Manjhi whose four MLA-strong Hindustani Awam Morcha (HAM) has expressed unconditional support to the new formation.

Khushwaha’s Rashtriya Lok Samata Party had merged with the JD(U) in 2021.

Since morning today, reports on parallel meetings of JD(U) and RJD leaders in Patna had fuelled speculation of an imminent breakdown of the NDA government in the state.

A meeting of the RJD legislators convened by party leader Tejashwi Yadav at his mother Rabri Devi’s Circular Road bungalow, a stone’s throw from the chief minister’s residence, is understood to have endorsed the party’s joining the JD(U)-led coalition.

The news agency IANS has reported that the Bihar assembly speaker Vijay Kumar Sinha who tweeted on Sunday that he has tested positive for COVID-19, wrote on Twitter within a day – on Monday – that he had tested negative. The speaker’s role will be thrust into importance in the coming days as Nitish seeks to prove his majority in the assembly.

Nitish’s resignation comes against JD(U) sources speculated that he was unlikely to resign and would seek to replace BJP ministers with those of other parties.

JD(U) leaders had earlier rebuffed reporters’ queries on a churning. “Our party had held many such meetings of MPs and MLAs in the past. We have been told that the current meeting has been called to discuss organisational matters. Never heard about any major crisis in the NDA,” Rajya Sabha MP Ram Nath Thakur told PTI.

The BJP reacted angrily, accusing Nitish of “insulting and betraying” people’s mandate while blaming his prime ministerial ambition for the JD(U)’s decision to walk out of the NDA.

The party’s leaders also threw the jibe “Paltu Ram” (one who keeps changing sides), first used by RJD supremo Lalu Prasad Yadav, at Kumar and rejected claims that their party had tried undermining him.

“Despite having fewer seats, we made him (Kumar) chief minister. He has deceived the people twice. He is suffering from arrogance,” Ashwini Choubey, BJP’s Union minister, said.

Nitish Kumar had deserted the NDA for the first time in 2013 after Narendra Modi became the coalition’s prime ministerial candidate and then again ditched his coalition with the RJD-Congress combine in 2017 to walk back into the NDA camp.

Kumar’s former deputy Sushil Kumar Modi accused Nitish of telling blatant lies. “It is a blatant lie that BJP had made RCP Singh a minister without the consent of Nitish ji. Another lie is that the BJP was trying to split the JD(U). He was looking for an excuse to break ties. The BJP will return to power with a thumping majority in 2024,” Modi tweeted.

Political analysts however feel Kumar’s moves will have an impact on state and national politics and his relevance cannot be written off, even if his image takes a beating because of his chequered career.

Note: This article will be updated as developments take place.