The 'Bharat Jodo Yatra' is Off to an Encouraging Start, But It Has to Convince Voters

The Congress’s rivals will spare no effort to undermine it. Even some from within are sceptical. Congress leaders Rahul Gandhi, Shashi Tharoor and others during the 'Bharat Jodo Yatra' in Thiruvananthapuram, Kerala. Photo: Twitter/@ProfCong via PTI

It is never safe to hold an honest rally (i.e. where the audience is not a paid one) at the iconic Ramlila Maidan.

The expanse of the grounds can show up a flop embarrassingly.

That said, the Congress rally earlier this month against price rise, unemployment, and hate-ridden social divisiveness was clearly a success.

Not only were leaders and cadres from many states in robust attendance, but some reporters found proof that many ordinary citizens were there as well, nodding assent. Nor was Rahul Gandhi the only speaker. Many others who spoke mostly hit the ideological nine-pins without floundering.

As to what Rahul Gandhi said, it was once again apparent that no Congress leader since Jawaharlal Nehru may have made the connect between right-wing cultural revanchism and private corporate interests with the same clarity and consistency as the much-maligned Rahul Gandhi has been doing for some years now. Much-maligned, because of the support the Bharatiya Janata Party (BJP) gets among media outlets and powerful cronies.

Those who mock or revile him, do so not just for his lack of sophistry in public speaking, or an apparent general absence of charm, but, at bottom because he clearly seeks to take the grand old party leftward and the republic towards greater fairness in the discharge of its obligations to the people of India, obligations which span cultural, political, and economic principles and concerns within a secular-democratic republic.

In turn, Rahul Gandhi seems to care rather less about winning elections, more about a principled enunciation of where he stands ideologically.

It was interesting to see that where NDTV seemed shy of covering the rally (perhaps knowing that Adani would be referenced?), it was India Today – a Reliance-influenced channel – and Mirror Now of the Times Group which gave it more footage, albeit with some ill-mannered over-speak calculated to diminish its import.

Scanning the channels – many of which used to be saying how the young Gandhi is a part-time politician who has no connect with or knowledge of the people – now ask the question as to what was the need for the padayatra (walkathon) the Congress has undertaken, scheduled to last 150 days, stretching some 3,500 kilometres from the Indian Ocean to the Himalayan state of Jammu & Kashmir.

Clearly, as far as the captive media and their owners are concerned, the ruling BJP can do nothing wrong, and Congress and Rahul Gandhi can do nothing right.

It indeed now seems that simple.

They ask if the yatra will achieve any substantial results, or is it perhaps only a re-launch platform for Rahul Gandhi, given that party elections (note that the ruling BJP never holds any) are round the corner. 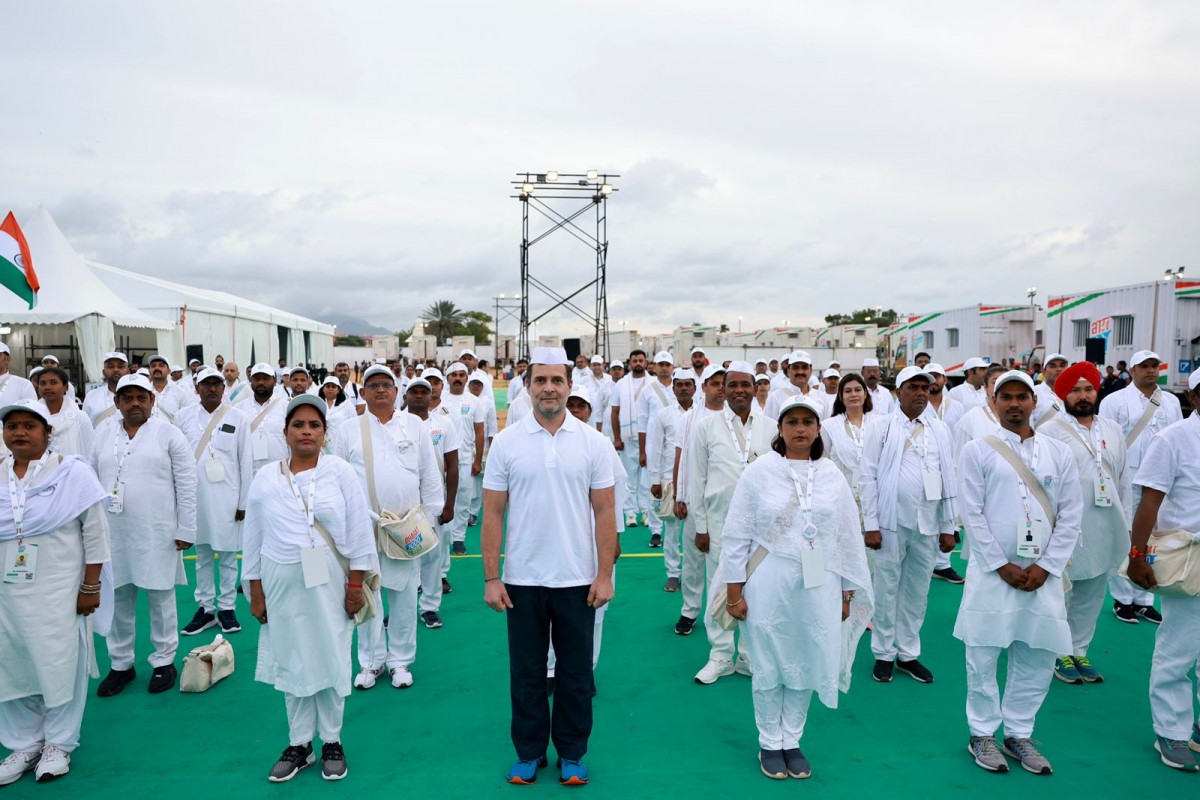 The fact is that far from thinking Congress and Rahul Gandhi archival things, the right-wing at bottom knows quite well that the real challenge to its ideological edifice can come only from that corner.

Not only is it a striking fact of post-independence India that the Indian National Congress is the only party never to have participated, be it from the inside or the outside, in any government with the BJP, but continues to have a national footprint far in excess of any regional party, and a vote share still next only to the BJP.

For example, in the national elections of 2019, the Congress polled 19% in second place, with the Trinamool Congress in third place with 4%.

And there is a reason why the nameless, although well-known, corporate buy electoral bonds aplenty to bolster the fortunes of the BJP.

As to the current Congress Yatra, do recall that similar questions were once asked, even by Congress people, about Mahatma Gandhi’s Bharat Darshan Yatra when he travelled the land by train, in a third-class compartment to know something of the people of India: will the Mahatma’s travels eject the British, they wondered then; some propagate now that the Congress mass contact through the Yatra will not but be just a fruitless showpiece.

Also Read: ‘Bharat Jodo Yatra’ Is on the Right Track but Congress Also Needs To Get Its Own House in Order

We do not know how it will turn out; but we applaud the party for finally turning a long-desired new leaf, of which the Ramlila rally and the yatra are clear proof.

It may be indicative that the yatra is receiving notice, even from publications that are no lovers of the Indian National Congress, among other media outlets.

An Indian Express report speaks not just of the “rich symbolism” that informs the walkathon but, significantly, of the odyssey being “high in energy.”

That clearly is not a bad start.

Some Congress spokespersons are heard to say that the party is not a band of mendicants but a political entity which aims to obtain state power as much as any other. That is a good thing to remember.

The larger question must be whether or not the Congress yatra will prove to be transformative in weaning the beleaguered citizenry in the Hindi belt especially away from the benumbed stasis of mind that the relentless cult-worshipping propagation has induced over the last eight years of national life.

Needless to say, the right-wing will spare no stratagem, however deleterious to the secular-democratic republic or the constitution, to prevent such unfreezing from happening.

That indeed will test the Congress worker as never before in recent history.

As Rahul Gandhi and others set out on a renewed discovery of India, it will be interesting to watch what moves are made by some leaders whose main goal seems to replace Modi in 2024 rather than challenge the concatenation of ideas that have made the post-Vajpeyee right-wing seemingly and also dangerously invincible.