Will Mamata Banerjee Invoke Bengali Cultural 'Asmita' to Push Back the BJP?

By successfully undertaking such a campaign, the TMC could project the BJP as a party of cultural outsiders. 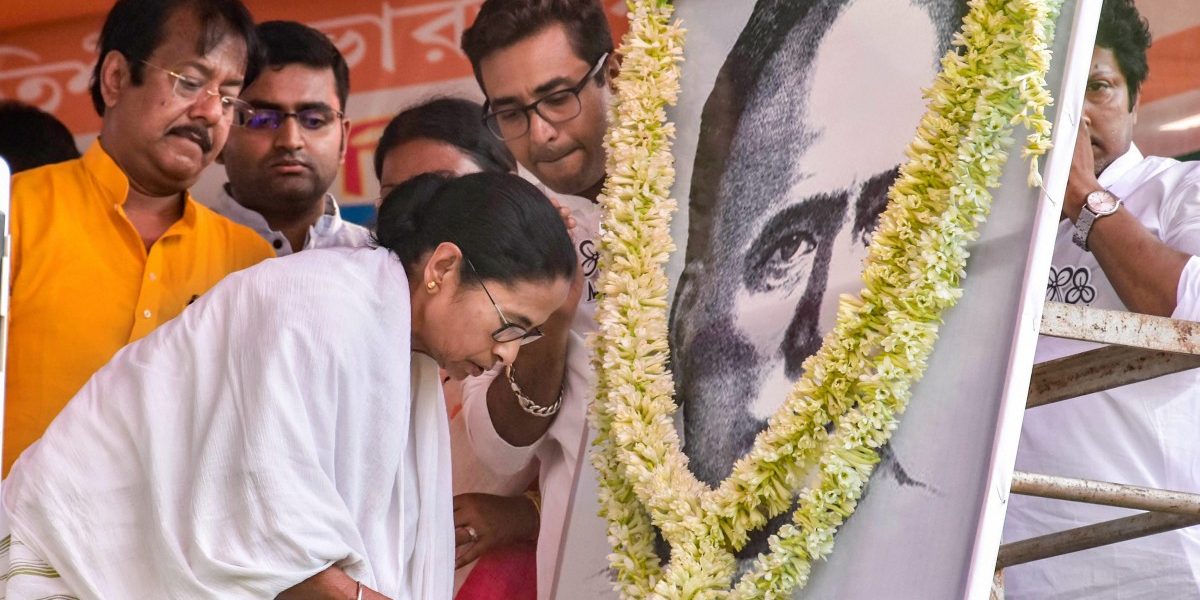 That the Bharatiya Janata Party (BJP) leadership has no intention of lowering the heat on the Mamata Banerjee government in Bengal is evident from the party’s latest decision to invite families of more than 50 BJP workers, allegedly killed in Bengal’s political violence, to the Narendra Modi government’s oath-taking ceremony. A day after Banerjee agreed to attend the ceremony on grounds of ‘constitutional propriety’, the prime minister, and BJP president Amit Shah, sent out invitations to the families, designating them as “special invitees”.

Reacting swiftly and predictably, Banerjee retracted her decision to attend the ceremony. “The ceremony is an august occasion to celebrate democracy, not one that should be devalued by any political party which uses it as an opportunity to score political points,” she tweeted. “There have been no political murders in Bengal. These deaths may have occurred due to personal enmity, family quarrel and other disputes; nothing related to politics. There is no such record with us,” she added. An assertion that, given the continued high levels of political violence in the state, will convince few within and outside the state.

In its decision to invite the families in question, the BJP sent out a clear and provocative message to the Trinamool Congress (TMC) that the party means serious political business in Bengal. And that Banerjee’s gesture of accepting the invitation would be met with a retaliatory political gesture.

Meanwhile, the situation in Bengal continues to be tense. Riding changing political tides in the state, the BJP seems to be closing in on the ruling TMC. As anticipated not just by the BJP but the Communist Party of India Marxist (CPI(M)) as well, the TMC has begun to unravel. On Tuesday, three MLAs in the Bengal assembly – two from TMC and one from CPI(M) – joined the BJP at the party’s Delhi headquarters. More than 50 TMC councillors too switched to the BJP.

Among the new converts were TMC legislators Subhrangshu Roy, son of BJP leader Mukul Roy, Tushar Kanti Bhattacharjee and Debendra Nath Roy of the CPI(M). The TMC recently suspended Subhrangshu for six years, charging him with anti-party activities. From all indications, more defections could be in the offing.

With 211 legislators in the 294-assembly at the moment, the TMC seems to have the numbers to ward off an imminent BJP threat. However, given the political volatility created by the BJP’s aggressive determination and the CPI(M)’s carefree fanning of the flames, Banerjee does indeed have reason to worry.

Fast-paced developments over the last week in Bengal suggest that rather than wait for the 2021 assembly polls, the BJP could work to a plan, pulling off a coup from within the TMC ranks. In case defections go on – BJP leader Kailash Vijayvargiya has gestured towards seven more rounds – Banerjee will need to find ways and means to stem the hemorrhage. A weakened TMC at the time of the 2021 assembly elections would suit the BJP as well as the CPI(M). Credit: Reuters

No doubt, the current arithmetic in the assembly strongly favours her party. But the BJP’s strategy of chipping at the block, even at minor levels, could easily demoralise supporters and entice opportunists. A weakened TMC at the time of the 2021 assembly elections would suit the BJP as well as the CPI(M). Both parties have a shared interest in bleeding the party in power; though only one is likely to reap rewards from the oncoming chaos.

Ideally, the BJP would like the TMC to collapse before it runs its full tenure. On the ascendant, the party would like to build upon the grievances of disaffected TMC legislators with the aim of slowly weaning them away, preferably before 2021. Then there is the option of citing a “breakdown of law and order” situation and seeking the imposition of President’s rule in the state. Such a plea may even appear valid – despite its historic baggage of gross misuse by erstwhile Congress governments – in a perennially violence-wracked state like Bengal.

Interestingly, as an ally in the Vajpayee-led NDA government and in opposition to the Left Front government, Banerjee in the late 1990s, time and again urged the Central government to bring Bengal under President’s rule. Political violence under the CPI(M)-led government was then, as high as it is now under TMC rule. To some extent, then, the scenario playing out now is a continuation of that history.

The challenges before Banerjee, at this moment, are huge. Given the popular mood in the state, the TMC leader would need to devise innovative strategies to combat the rising forces of the Hindu Right. One such strategy might be to fall back on cultural idioms that are unique to Bangla culture. By successfully undertaking such a campaign, the TMC could project the BJP as a party of cultural outsiders.

Battling a party essentially viewed as one of the Hindi heartland, Banerjee could perhaps go on to reinvent the TMC as a party committed to safeguarding Bangla asmita. Moreover, it is possible to suggest that the language articulating such a sentiment has already been crafted.

For instance, it’s worth noting in this context how the TMC recently turned the vandalisation of Vidyasagar’s statue during an Amit Shah rally on College Street, into a marker of Bengali resistance against the BJP. The day after the statue’s decapitation, thousands marched alongside Banerjee, taking the same route Shah had taken the previous evening. 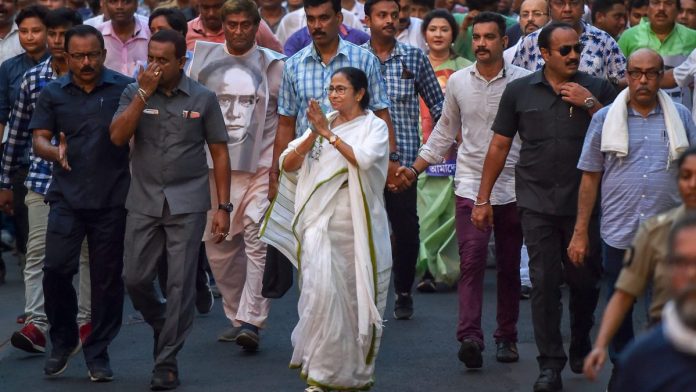 Mamata Banerjee at a protest rally against the clashes that broke out during BJP president Amit Shah’s roadshow. Credit: PTI

Or take another strong marker of such cultural differentiation. Despite strong factual contradictions, the RSS – based on Rabindranath Tagore being the composer of the national anthem – continues to raise questions over his patriotism. Notwithstanding refutations by numerous reputed historians, the RSS maintains that Tagore wrote the national anthem, Jana Gana Mana, in celebration of King George V. Such an interpretation, factually wrong as it is, is not likely to go down well with Bengalis. Tagore is as integral to Bangla culture and society as Golwalkar is to the RSS ideology. This is just one of the many cultural fault lines that could pose a problem for the BJP.

Banerjee, on the other hand, has expansively used Bengal’s homespun culture in her struggle against the CPI(M)-led Left Front government. She developed a language of opposition that was unique to taking on the Left Front. Unlike the Marxist language of class struggle and internationalism, Banerjee harped on home-spun Bengali culture and humanism.

In the run-up to the 2011 assembly elections that ended the Left Front government’s protracted rule, Banerjee reached out to her audience by invoking basic parables, digging into the works of Ramakrishna and Vivekananda, using shlokas from the Gita and the Upanishads. In fact, much of the cultural language Banerjee used in the 2019 Lok Sabha election was a replay of her 2011 campaign against the Left Front.

Observers could already sense some of these developments during the election campaign in Bengal. Now, as the situation on the ground gets messier and the newly-reelected government digs in its heels at the Centre, it is worth restating how critical the next few months could be for Bengal’s future.